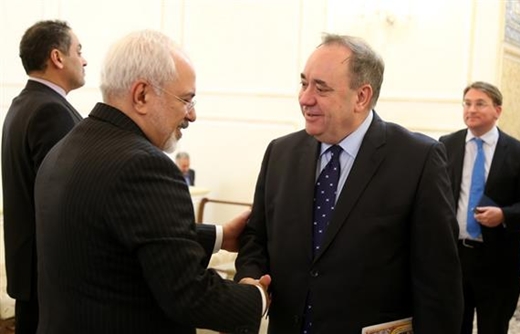 The spirit of the law lays down the approach that whoever is siding with terrorists is immune, Zarif said in a meeting with the French Senate president.

“The legislation is against Europe’s independence and the spirit of the law lays down the approach that whoever is siding with terrorists is immune,” Zarif said in a meeting with French Senate President Gerard Larcher in Tehran on Monday.

He urged European countries “to express their independent resolve” in the face of such discriminatory approaches.

For more than 25 years, the Visa Waiver Program (VWP) allowed people from 38 countries, namely European states, Australia, Japan and South Korea, to travel to the US without applying for a visa.

However, US President Barack Obama on Saturday signed a USD-1.1-trillion funding bill that aims to exclude from the VWP all dual nationals from Iran, Iraq, Syria and Sudan, and anyone else who has traveled to those countries in the past five years. Such foreign nationals are now required to obtain a visa through standard measures, including face-to-face interview at a US consulate.

Zarif further said extremists and Takfiri groups have turned into common threats to Iran, France and the entire region, and emphasized that regional crises should only be settled through political means.

The French Senate president, for his part, said his country welcomes the improvement of ties with Iran and that the French Senate “will take appropriate action” with regard to the US legislation.

Earlier Secretary of Iran’s Supreme National Security Council (SNSC) Ali Shamkhani told the French official the new US legislation will deepen the distrust of Washington and negatively affect the implementation of the July 14 nuclear agreement between Tehran and the P5+1 group of countries.

Certain measures and decisions including the recently devised visa restrictions in the US “will definitely increase misunderstanding and distrust and can have irreversible effects on the implementation of JCPOA,” Shamkhani said in a meeting with Gerard Larcher.

Shamkhani said that JCPOA has prepared the ground for dialog instead of hostility and conflict, calling on both sides of the deal to safeguard the achievements of the agreement. 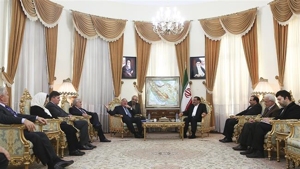 Stating that the JCPOA has opened a new chapter in relations between Iran and France, Shamkhani said that taking “common and constructive steps” for the restoration of trust is a starting point in the establishment of new ties on the basis of mutual respect and national interests of the two nations.

The Iranian official further expressed regret over the November 13 terrorist attacks in the French capital, which killed some 130 people, calling for concerted global efforts to fight terrorism that poses a threat to the security in Europe, the US, West Asia and parts of Africa.

Shamkhani also criticized certain countries for spreading terrorism by adopting wrong policies and using terrorism as a tool, saying that eradicating the root causes of terrorism and the causes promoting it is a main step in countering the menace.

Larcher, for his part, described the Islamic Republic as a center of stability in the West Asia region, calling for closer political and security cooperation between Tehran and Paris.