Israel attempts to walk back Prime Minister Benjamin Netanyahu’s shockingly overt comments about “war with Iran” on the sidelines of a US-organized Middle East “peace” conference.

Speaking in a short video recorded on the sidelines of the anti-Iran meeting in Warsaw on Wednesday, hawkish Netanyahu said the event “is an open meeting with representatives of leading Arab countries, that are sitting down together with Israel in order to advance the common interest of war with Iran.” 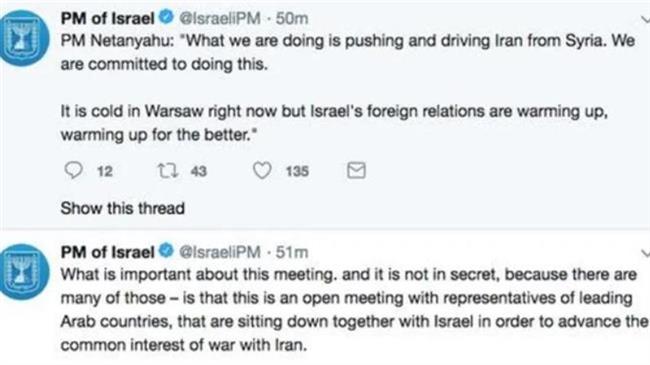 The US government quickly reached out to Israeli officials to ask for an explanation, according to NBC News.

American delegates traveling with Vice President Mike Pence — who is attending the summit in Warsaw, said that senior Israeli officials told the US that it was a matter of “bad translation,” the report added.

Senator Angus King, (I-Maine), a member of the Senate Intelligence Committee, rejected the idea that Netanyahu had simply been mistranslated, and said “he knew what he meant.”

An Associated Press correspondent based in Israel said that he had himself heard Netanyahu using the word ”milchama.”

Last month, US Secretary of State Mike Pompeo announced that the Warsaw forum would purportedly focus on the “important element of making sure that Iran is not a destabilizing influence.”

Later, however, and as officials from various countries indicated their refusal to participate, US Deputy Ambassador to the United Nations Jonathan Cohen said the meeting was “not a venue to demonize or attack Iran,” in an apparent about-face.

Tehran condemned the confab as a “circus” and summoned Poland’s envoy to protest the European country’s hosting of the event.