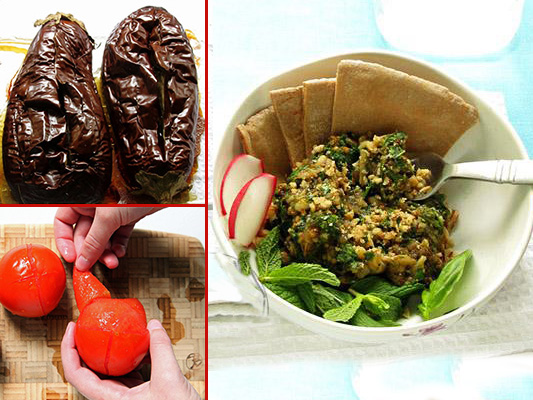 Nazkhatoon is one of the most popular and delicious local foods in Iranian cuisine.

Nazkhatoon is an Iranian food popular with folks in the north of the country. It is cooked a little differently in different towns and cities. In Guilan province, no meat is used in cooking Nazkhatoon, and it is mostly made with aubergine and tomatoes, and can be an ideal meal for vegetarians.

Aubergine does not have much calories because water makes up most of it. Ninety-two percent of uncooked aubergine’s weight is water. Half a glass of cooked aubergine only has 14 calories of energy, less than half a gramme of protein and around 3 grammes of carbohydrates.

Due to its low calorie, aubergine is suitable for those who want to lose weight.

Verjuice: half a glass

Wash the aubergines well and put them in the oven for half an hour to be baked. Then peel and chop them to very small pieces.

When the aubergines are in the oven, put the tomatoes in a bowl and pour some hot water on them to help peel them easily. Then chop them and put them aside.

Put the chopped aubergines in a casserole. Then add verjuice and pomegranate juice, and leave the mix to boil well and become thick. Then add Persian hogweed, mint and onions and mix them. Remove the dish from the oven before adding tomatoes. Now remove the prepared food from the casserole and put it in a dish. Garnish with small pieces of walnut.