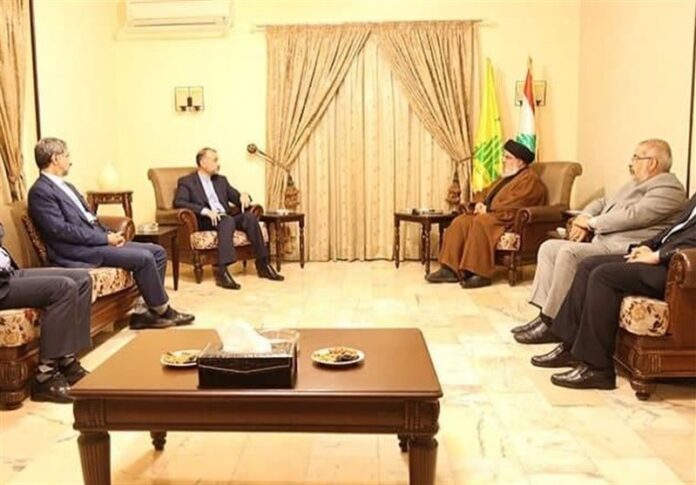 The leader of Lebanese resistance movement of Hezbollah, Sayyed Hassan Nasrallah, has praised Iran as a sincere ally in a meeting with Iranian Foreign Minister Hossein Amiradollahian in Beirut.

He added that Iran has proved that it is a loyal ally that wouldn’t leave its friends alone.

According to Tasnim News Agency, Sayyed Hassan Nasrallah was apparently referring to the US and the West who leave their friends alone under difficult circumstances, with the Taliban takeover of Afghanistan being an example.

Sayyed Hassan Nasrallah also said he is highly hopeful that Lebanon will get out of its current crisis with public cooperation.

In the meeting, Amirabdollahian reaffirmed Iran’s policy to support and assist Lebanon in all areas.
Iranian ambassador to Lebanon Mohammad Jalal Firouznia was also present in the meeting.

Sayyed Hassan Nasrallah and Amirabdollahian discussed the latest political developments in Lebanon and the wider region.

The Iranian foreign minister on Thursday also met with high-ranking Lebanese officials including President Michel Aoun, Prime Minister Najib Mikati, Foreign Minister Bu Habib and Parliament Speaker Nabih Berri. Also on Thursday, Amirabdollahian met with the officials of the Supreme Islamic Shi’a Council of Lebanon and the family of Imam Mousa Sadr in Beirut to offer his condolences on the passing of Imam Musa Sadr’s wife Ms. Parvin Khalili and the former speaker of the Lebanese