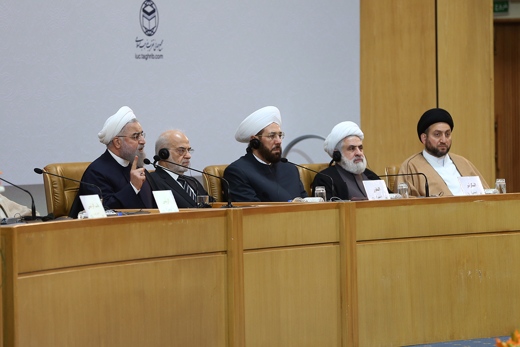 The president criticized certain Muslim countries for purchasing US arms and either delivering the weapons to militant groups or using them against other Muslim nations.

Addressing a 29th International Islamic Unity Conference in Tehran on Sunday, Rouhani said enemies and big powers are doing their best to portray Islam as a religion of violence, urging Muslims to take the necessary steps to thwart all efforts aimed at depicting Islam as the religion of violence.

The Iranian president added that faced with such plots, “Muslims have no option but to join hands and … choose the right path.”

Rouhani stated that many ongoing acts of violence and terror as well as massacre are taking place in the Muslim world, North Africa, the Middle East and West Asia, adding that there must be an end to “intellectual and discourse-based violence.”

The president criticized certain Muslim countries for purchasing great quantities of US arms, and either delivering the weapons to militant groups or using them against other Muslim nations.

Daesh Takfiri terrorists, Rouhani argued, recruit members that are overcome by cultural or economic poverty, adding, “So, let’s eradicate cultural and financial poverty in our societies.”

The Iranian president emphasized that bombs and military equipment cannot do away with terrorism.

The biggest responsibility we shoulder is to repair the image of Islam in the court of world public opinion, President Rouhani said.

In reference to efforts made to unseat the Syrian President Bashar Assad, Rouhani said no foreign country can make decision on the fate of another country and only that country’s people can make that decision.

Iran has repeatedly announced that it pursues the goal of achieving a world without violence and that every problem can be settled through negotiations, Rouhani said.

Iran succeeded in solving a problem, which had been aggravated over years, through wisdom and negotiations with major world powers, he noted, adding, “At the negotiating table, we managed to bring the most complicated international political issue to a resolution that is beneficial to all the negotiating sides, the region and the world.”

Prominent religious figures, ministers and scholars from some 70 countries are participating in the conference, organized by the World Forum for Proximity of Islamic Schools of Thought in Tehran. The meeting which focuses mainly on the existing crises in the Muslim world will endon Tuesday.