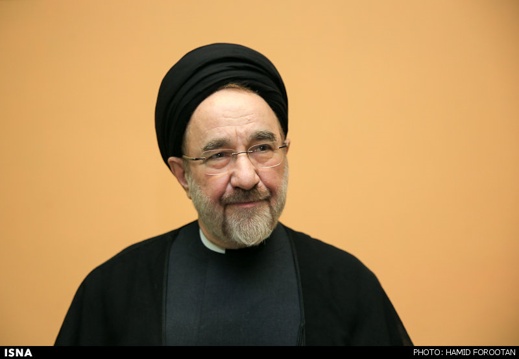 Mohammad Khatami, who championed the idea of Dialogue among Civilizations, has condemned in a letter to the UN chief acts of terror worldwide, calling for the revival of dialogue among nations and religions.

Former Iranian President Mohammad Khatami has condemned acts of violence and extremism all over the world, calling on the UN, international organizations and peace-seeking individuals to take serious measures to counter these heinous phenomena.

The Iranian Students News Agency (ISNA) reported on January 18 that the former president’s condemnation came in a letter he wrote to UN Secretary General Ban Ki-moon. The following is the translation of the letter in its entirety:

The Esteemed Secretary General of the United Nations

Like you and hundreds of millions of people around the world, I was saddened by the Paris terror attacks and similar alarming incidents which preceded them or are likely to take place in the future. I condemn in the strongest terms these attacks which are an example of the ominous and inhumane consequences of terrorism and extremism in the East and West. But the UN, international organizations, governments, civic institutions, and the elite are expected to do more than mere condemnation.

In today’s world, violence, insecurity and extremist acts have created a burning hell whose flames engulf all humans, followers of all religions, nations and ethnicities around the world. The point is that what is done in the name of the fight on terror and violence is not only unhelpful, but it sometimes fans the flames of such a catastrophic disaster.

Terrorism and violence are not a war between religion and freedom; they are not a conflict between the East and West; nor are they part of confrontation between religions, ethnicities and nations. They are a grave new threat that has multiple roots. They should be uprooted and the world should be pulled back from the brink of “extremism”.

In September 2001 New York’s Twin Towers were brought down as a result of an appalling terrorist act. Subsequently the threat of “terrorism” which already existed came to surface. The Islamic Republic of Iran condemned those attacks hours after they were carried out. Iran also put forward the concepts of “Dialogue among Civilizations” and “World Coalition for Peace” as a solution.

However on the other side of the world, some thought they could eliminate the ominous phenomenon – whose flag was believed to be borne by groups like Alqaeda – through forming a coalition to wage “war on terror”.

If that method worked, why is that today we are witnessing the spread of terrorism around the world; [why is that] the waves of terrorism have struck Paris and have created havoc everywhere, from the easternmost to the westernmost corners of the world, in Iraq and Syria, in Palestine and Lebanon, in Afghanistan and Pakistan, in Nigeria and Myanmar and elsewhere in the world. Violence, bloodletting and terror have tightened the screws on people – from Shiites, Sunnis, Izadis, Christians and Jews to religious scholars, intellectuals, politicians, children, the old and the youth.

Today, security has not been undermined only in the Middle East, Asia, Africa and Latin America, but nobody feels safe in the heart of Europe and America. We should admit that in today’s interconnected world security either prevails everywhere or goes missing everywhere.

Today we would not have seen such ugly incidents if the voice of dialogue, peace and tolerance, which echoed at the United Nations in a critical moment in history and was given public welcome, had been taken seriously; if we had tried to address the root causes [of the events] in our quest of practical and legally binding solutions; if the UN and international institutions had been able to make statesmen honor what is needed to establish peace; and if civic institutions and religious scholars and thinkers had taken bigger steps.

Would we have witnessed such bitter days if the invitation for “Coalition for Peace Based on Justice” which was issued in 2001 following the approval of the idea of “Dialogue among Civilizations” had not been missed in the thick of war, bloodshed, revenge and post-9/11 military buildups which were more bloody than the attacks themselves, and if the international decisions had been made based on advice from well-wishers?

Have we thought – not only based on religious teachings and ethical principles but also in line with scientific approaches and political experiences – that what role poverty, deprivation, suppression, occupation, displacement, despotism and worse than that humiliation corrupt governments and expansionist powers have imposed on all humans in the world have played in triggering such heinous incidents?

If instead of tolerance and love, hatred and violence reigned supreme, and if altruism were replaced with a fight-everyone-else mentality and those who were more powerful used more violence and supported the violent people whose acts they found in line with their own interests, wouldn’t we be entrapped in a vicious circle of violence and suppression on the one hand, and terror and extremism on the other?

When millions of people lose their land and the shouts of the oppressed and the displaced are drowned out in the mad cheers of occupiers, suppressors and killers, and when those in power humiliate the oppressed and displace people instead of punishing the aggressors, fatal identities are rebuilt, and borderless terrorism recruits soldiers even in the West. Terrorism, extremism and marginalization cannot be classed as good or bad. The horrible discriminations which are the direct result of adopting double-standard policies should not be overlooked.

Lovers and defenders of freedom, justice and human rights – no matter where they are and what ideology they follow – opponents of discrimination and imposition, and those who support the right to life and respect for all people are not few in the world, but their voices are not heard! We need to think through practical approaches to make these voices heard. Time has come for the international institutions together with the world’s elite, governments and civic institutions to ponder on the reasons behind the creation of such a nasty situation, and try to fairly and realistically launch a fight against it.

I know that what has formed over time and led to discrimination, injustice, backwardness of nations, establishment of unfair international systems, and violence and extremism will not suddenly become history through words and advice alone.

I know that those groups – which are engaged in bias, ignorance and [moral] depravity – which have turned their backwardness and humiliation into hatred, have adopted violence and terror to reclaim their lost rights, and have sanctified their ugly and inhumane behavior and betrayed humans and the holy, elevated values, will not simply renounce crimes only because of well-wishers’ advice and people’s statements and [protest] rallies.

Furthermore, the use of force and violence against these groups – as the experience has proved – will do nothing but deepen deviant tendencies and help them grow. Also it will help depict them as the oppressed [victims] and help them bring on board more suppressed people.

Ethical and political advice will do little to undo the effects of the crashing waves of Islamophobia which trigger the wrath and resentment of part of the public opinion against Islam and Muslims, justify any insult to the sanctities of nations and ethnic groups, and legitimize aggressive measures against innocent nations, especially Muslims.

It will also do nothing to undermine the effects of Westernophobia which is the result of failure to distinguish between the colonial aspects of Western policies overseas and the civilizational and cultural aspects of the West which have had positive results, at least for Westerners.

We cannot overlook practical experiences and efforts either. It is a global and human responsibility to – far from emotionality – catch the real attention of the people in the world and those involved in thinking and action.

To identify the root causes of the grim, bitter reality which has surfaced in the form of violence and extremism, of which terrorism is only one horrible and palpable manifestation – either by governments or by ideological and political groups – is the first step toward working out a solution.

If one such solution is put forth, it will undoubtedly be welcome by the public opinion and the peaceful and humanitarian well-wishers. If so, it will gradually help isolate extremists and violence-seekers and, God willing, it will help eliminate extremism and violence on the international stage.

For my part, minor it is though, I suggest that the United Nations take action courageously and call on thinkers, intellectuals, politicians, governments and civic institutions to take immediate measures to materialize a historical reconciliation which is the objective of Dialogue among Cultures and Civilizations.

The Foundation for Dialogue among Civilizations too is ready to recount its experience and cooperate with the world’s well-wishing and peace-seeking thinkers to help the voice of dialogue and peace be heard louder and bring people closer to a world free of violence and extremism.

Let us not let the world and humans be subject to [and live in] fear, insecurity and risks. The foundations of religion, freedom, justice, ethics, dialogue and peace should be vigorously defended.