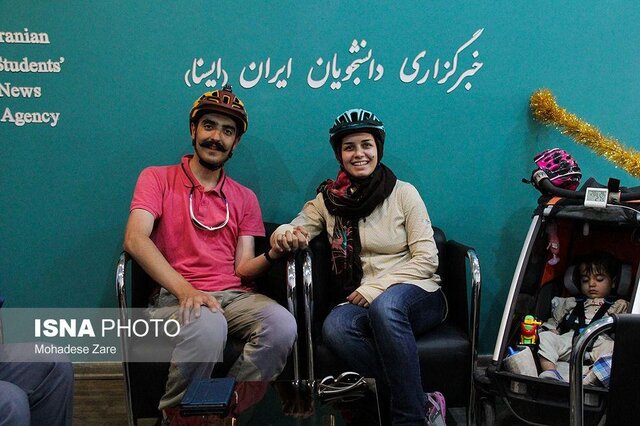 Iranian couple Ehsan Mansourian and Shima Hashemnia, along with their little child Arsalan, have managed to realize their dream of cycling around Iran after 400 days.

Beginning their mission from the northeastern city of Mashhad, the family cycled for 8,400 kilometres passing through 18 provinces. During the adventure, they also held workshops at various stops to promote the culture of cycling across Iran.

Mansourians had embarked on a similar tour five years ago. They started cycling from the northwestern province of Azarbaijan towards Turkey’s Lake Van. Then they decided to continue cycling professionally. So, they began a new tour in the same year in Turkey and cycled from Iran-Turkey border till Antalya (about 1,000 km).

The three-member family have, in an interview with ISNA, shared their experiences of the 400-day cycling across Iran.

The couple said they gained a deep understanding of Iran and came to know that they can also launch journeys to even farther destinations. They said having sensed the positive impressions of cycling on their marital life during the first journeys, they decided to have a child and continue their journey with their child. During the recent journey, they were accompanied by their child.

Ehsan maintains that cycling has served for them as a starting point for a change in their lifestyle. He said cycling can lead to deep changes in anyone’s life.

On the other hand, he says, cycling can give us a better understanding of the nature. “Leaving the urban life behind provide us with a good sense of the nature.”

No Worry While Cycling in Iran

Shima says as a women and the mother of a little child, she has no fear while cycling in Iran.

“If I was afraid, I could simply do the cycling abroad but we were determined to cycle inside Iran and promote the culture of cycling,” she said.

Shima added it was during this journey that Arsalan began to toddle. She cites it as one of the most exciting experiences of the journey.

During the journey, many vehicles hoot at the cyclists. “This has two meanings. Either, they are warning you to clear the way for them or they say ‘good job’ to us.”

She also referred to the reactions of the vendors along the roads and said they greeted them warmly and gave them great motivations to accomplish their mission.

Ehsan said at first they were very worried about the road’s safety particularly because heavy vehicles move along them.
“But when we embarked on the journey, the fear turned into joy and we felt safe along the roads. They soon turned into the most favourable roads for a cycling family,” he concluded.