A look at newspaper headlines across the country on September 4

A majority of Iranian newspapers on Thursday September 4, 2014 ran front-page headlines on the 16th gathering of the Assembly of Experts, which came to a close on Wednesday. Some said the final statement of the assembly urged the government to do more on the cultural front, others reported that the statement identified unity as key to the sustainability of the Islamic system. They also reported that President Hassan Rouhani has urged his Cabinet to try their best to implement the instructions of the Supreme Leader and has commissioned his deputy Eshagh Jahangiri to oversee the measures Cabinet members take in this regard.

Ebtekar quoted the government spokesman as saying that implementation of the policy to introduce a single foreign currency rate would be gradual. “The anti-recession bill government has sent to parliament is partly designed to encourage local production and exports.”

Ebtekar also quoted the interior minister as denying rumors that members of the IS [Islamic State] terrorist group pose a security threat to the borders of the Islamic Republic. 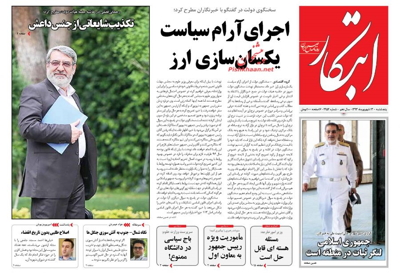 Abrar: “Will appointment of a new ambassador spark a thaw in trade ties between Iran and Germany?” The article that poses this question says Ali Majedi, a veteran diplomat and economist who currently serves as deputy oil minister, is expected to start his new job in Berlin later in September.

Abrar: “The election of Mehdi Chamran by Tehran City Council as its new chairman is a victory for Ahmadinejad supporters and should serve as a wake-up call for the 11th government,” a member of the Central Council of [reformist] Baran Foundation said. Ettela’at: “We are bent on eliminating poverty,” President Rouhani said at a Cabinet meeting. “Respect for the civic rights of all ethnic and religious groups is a pillar of government policies.”

Ettela’at: “Universities should not serve as a venue for political rivalry,” the acting minister of science said. 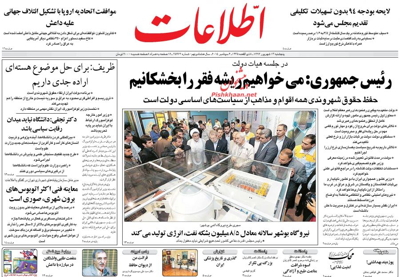 Aftab-e Yazd quotes Javad Karimi Ghoddusi, a principlist deputy representing Mashhad in the Islamic Consultative Assembly, as saying “Government has overstepped the red lines of the establishment.” He claims that over the past year the government of President Rouhani has focused much of its attention on nuclear talks which have so far only resulted in “more sanctions, threats and humiliation.” 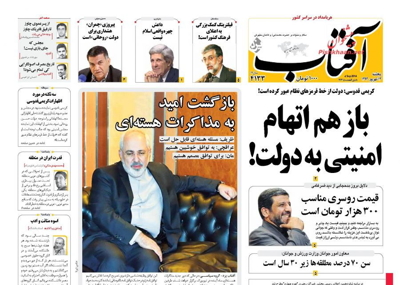 Hemayat cites Deputy Health Minister Ali Akbar Sayyari as saying that high blood pressure is to blame for 84 percent of deaths in Iran. Vatan-e Emrooz has a story on fires that charred some 1,000 hectares of forestland in the north earlier this year and quotes a member of the Islamic Consultative Assembly’s Environment Committee as saying that the Environment Protection Organization is not going far enough in dealing with the fires, which are mostly arson. 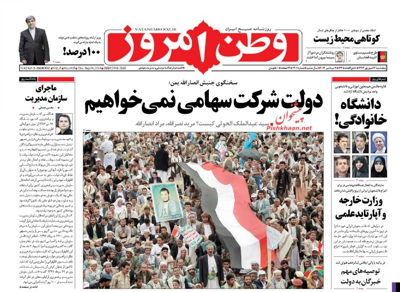 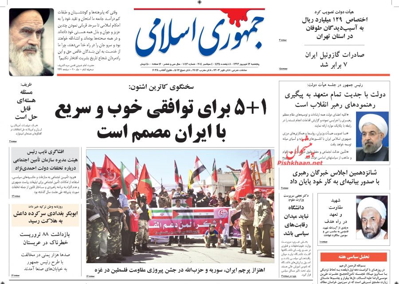 Javan: “Iran becomes the first Asian basketball team to secure a victory in FIBA World Cup in Spain.” It came after Iran defeated Egypt 88-73 following three back-to-back defeats at the hands of Spain, Brazil, and Serbia. 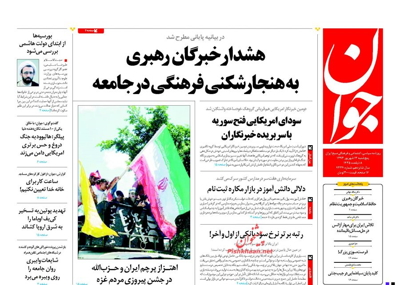