A look at newspaper headlines across the country on September 2

Most of the Iranian newspapers on Tuesday September 2 gave front-page coverage to comments by the President that Iranian youngsters cannot be kept under lock and key. His comments in support of the provision of speedier Internet service to Iranian users came after introduction of 3G technology by the authorities sparked a controversy in the country. Here is a look at what else made headlines in the newspapers:

Ettela’at: “New vaccines have been introduced to the national vaccination program.”

“A 6-fold increase in the number of children suffering from Vitamin D deficiency poses a threat to the next generation,” Deputy Health Minister Dr. Ali Akbar Sayari said.

Ettela’at: “Three judges and seven defense attorneys who have failed to abide by the rules along with seven judicial fixers have been arrested,” Judiciary Spokesman Gholamhossein Mohseni Ejei told a news conference, adding, “A gang that forged academic degrees has been busted and authorities have seized 205 fake degrees.”

Aftab-e Yazd: “Mohammad Reza Rahimi, a senior official with the Ahmadinejad government, has been sentenced to jail term and fined.” 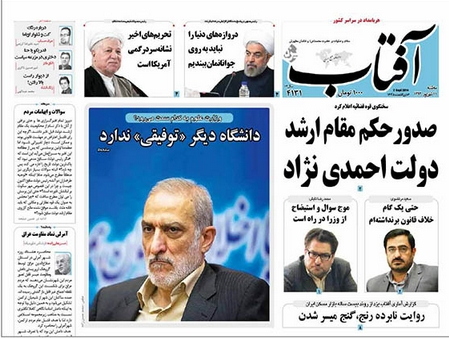 Abrar: “Mohammad Reza Rahimi has been sentenced to time in jail and fined,” the judiciary spokesman said, adding, “The verdict is subject to appeal.” When the former first vice-president was still in office, he faced corruption charges, but his boss warned that the prosecution of his deputy would be a red line of his government and thus practically put the graft case on hold.

Abrar: “We will not normalize ties with Libya before the case involving the disappearance of Musa al-Sadr is solved,” said Lebanese Parliament Speaker Nabih Berri. Ebtekar: “We can’t keep the gates of the world closed to our youth,” President Rouhani said as he underlined efforts to speed up Internet connection in the country.

Ebtekar: “Foreign policy is no stage for sloganeering; there are principles to be observed,” said Chairman of the State Expediency Council Akbar Hashemi Rafsanjani. 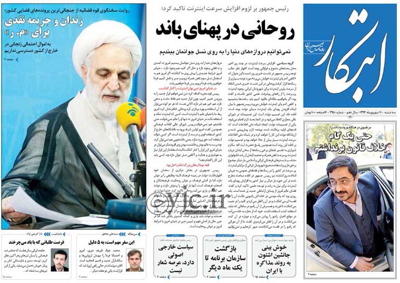 Etemad: Government Spokesman Mohammad Bagher Nobakht says the Management and Planning Organization will be restored within a month.

Etemad: “Three hours of talks for the sake of talks” is the headline of a story that deals with the negotiations between Iranian Foreign Minister Mohammad Javad Zarif and EU’s Catherine Ashton ahead of talks between Iran and P5+1 at a ministerial level. 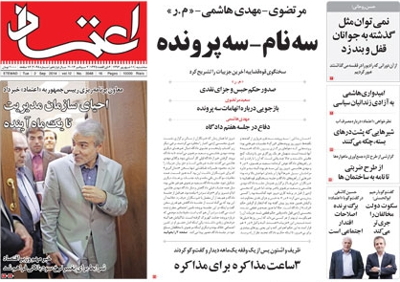 Arman-e Emrooz, a reformist-leaning paper, featured a rather big photo of a smiling Hashemi Rafsanjani on its front page, with an accompanying headline which puts the following question to the readers: “Will Ayatollah Hashemi be headed for Saudi Arabia?” 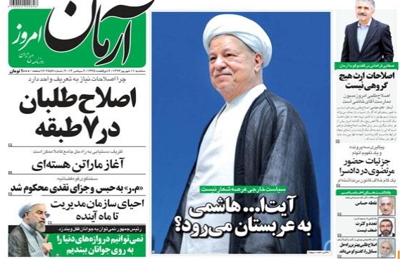 Afarinesh, a daily which mainly focuses on education news, quotes Akbar Hashemi Rafsanjani as saying, “University students and professors should be able to study and conduct research in a free atmosphere.”

Afarinesh puts a photo of the 78th Gathering of the Presidents of Medical Schools from across the country at the center of its front page. It features Health Minister Seyyed Hassan Hashemi, an ophthalmologist who has been at the helm of the Health Ministry ever since President Hassan Rouhani came to office. Last week, the president awarded him the medal of efficiency. 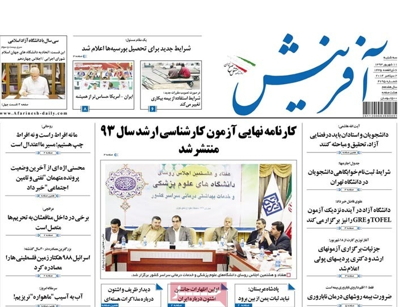 Shahrvand: “As many as 47 million Iranians are on an inappropriate diet,” a 78th Gathering of the Presidents of Medical Schools heard. 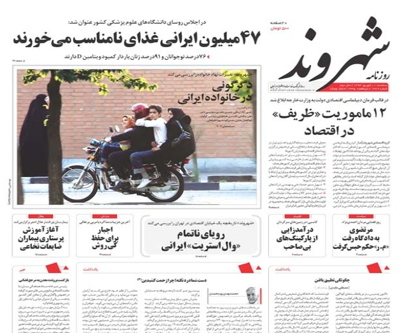