A look at Iranian newspaper front pages on Sept. 30

Two stories generated headlines Tuesday on the front pages of Iranian dailies. The stellar performance of Iranian athletes in the 2014 Asian Games in Incheon, South Korea which landed Iran in the fifth spot of the medal table was the first top story. The Caspian Summit and comments by President Rouhani at the gathering were also splashed across the front pages of newspapers.

Aftab-e Yazd: “Once more an impeachment tsunami is on the horizon; some [MPs] are insisting on impeaching the minister of energy.” 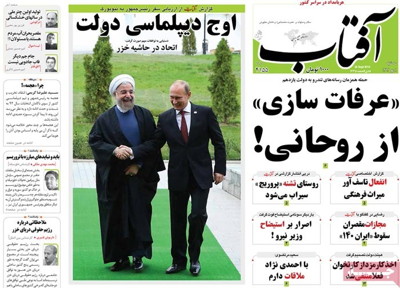 Arman-e Emrooz: “Protesters thronged outside the Ministry of Culture and Islamic Guidance, chanting slogans against the minister.” What is perceived as widespread disregard for the Islamic dress code was the reason why the worriers [a reference to radical advocates of the former president who have voiced concern about the state of affairs under President Rouhani] gathered outside the ministry.

Arman-e Emrooz: “I will present evidence, I do not accept my conviction and will appeal the verdict,” said former First Vice-President Mohammad Reza Rahimi, who was recently found guilty of corruption. 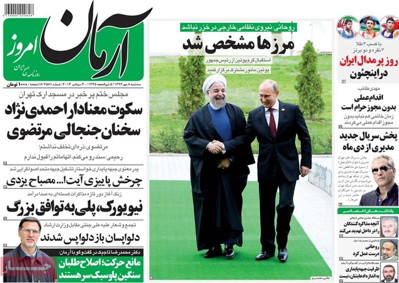 Ebtekar: “Netanyahu’s delirium; the Israeli prime minister described Palestinian resistance and the killing of people at the hands of ISIL as two sides of the same coin.”

Ebtekar: “I did not take one iota of action which ran counter to the law,” said former Tehran Prosecutor General Saeed Mortazavi.

Ebtekar: “A state of emergency in the principlist camp” is the headline of a report that underlines there are deep divisions among principlists prior to the 10th parliamentary elections. The daily speculates that following the setback the faction suffered in the presidential vote in 2013, it might have to set aside differences and acquiesce to forming a coalition with other groups, in particular the Islamic Revolution Stability Front, to secure victory in the upcoming vote and make up for the past defeat. 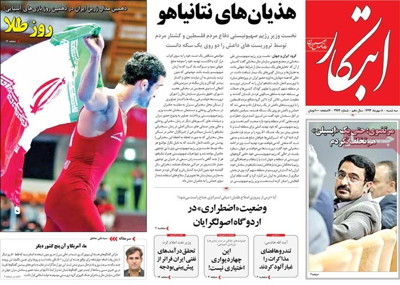 Eghtesad-e Pooya: “Today the world’s widest-body airliner is to touch down at Imam Khomeini Airport.” 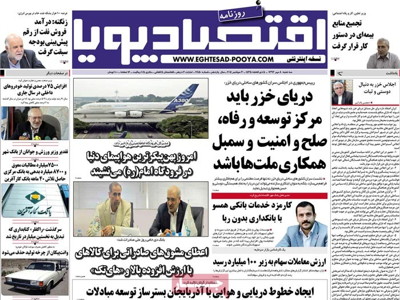 Etemad: “In privatizing oil companies, the previous government cherry-picked the best firms and left us with dead wood,” complained the oil minister. 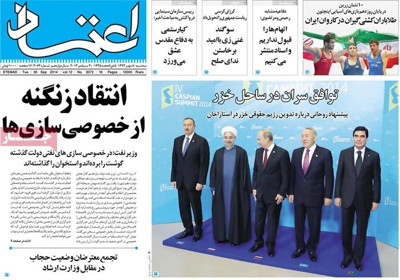 Ettela’at: “The Caspian Sea should be a symbol of peace, security, and cooperation between nations,” said President Rouhani at the 4th Caspian Summit.

Ettela’at: “A service in commemoration of Mohammad Ebrahim Bastani Parizi [an Iranian author, historian and poet who died on March 25, 2014] at the Council for Cultural Assets and Works.” 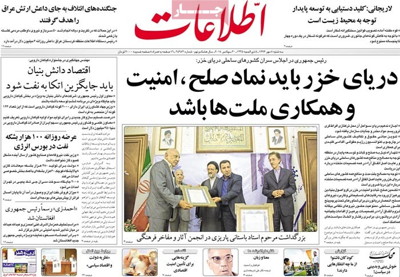 Hemayat: “The obstacles that America and Canada are throwing in the way of extraditing Mahmoud Reza Khavari [ the former CEO of Iran’s Melli Bank who is the main defendant in Iran’s biggest banking fraud case] are politically motivated,” said the deputy prosecutor general for political and security affairs. 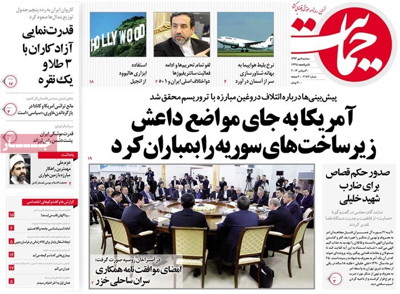 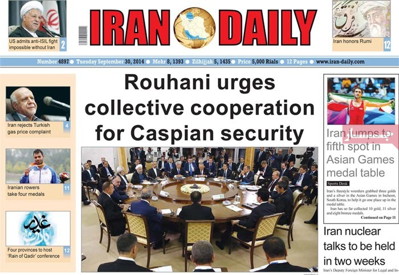 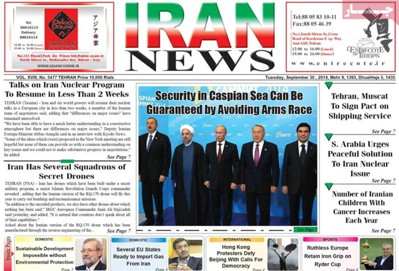 Javan: “New York talks under wraps; apparently nuclear talks have made more progress than officials let on.” is a report in which the daily encourages new speculation and casts doubt on the inconclusive outcome of New York nuclear talks. Drawing on the comments of Russian Foreign Minister Sergey Lavrov [who said the negotiations are “moving in the right direction” and that “some 95 percent of the deal is agreed.”] and German Foreign Minister Frank-Walter Steinmeier [“We have never been so close to a deal as now.”], the daily believes the Iranian and American negotiating teams are economical with the outcome of the talks and keep some parts of the deal to themselves. 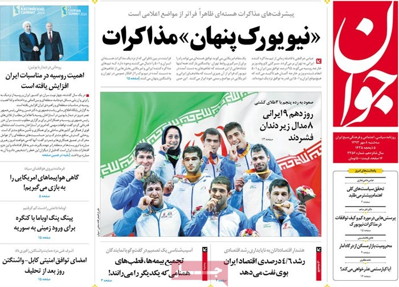 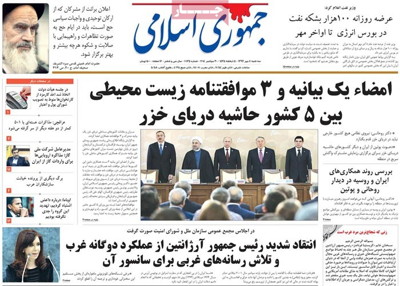 Kaenat: “Threecooperation deals and a statement have been signed by countries on the Caspian Sea.” 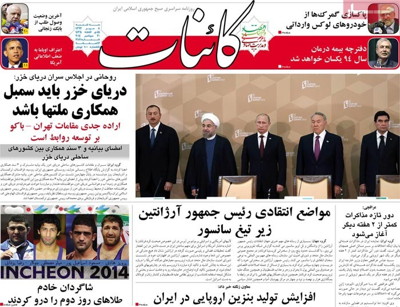 Kayhan: “The individual who fatally stabbed Ali Khalili [a 19-year old man who was assaulted and beaten while promoting virtue in 2011 and died from his fatal injuries in 2014] was sentenced to death. 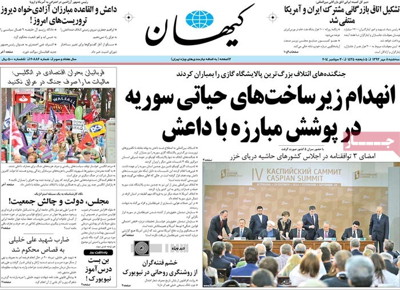 Nasl-e Farda: “The Supreme Leader sent a letter on [protection of] the environment to officials in charge,” said a member on the Healthcare and the Environment Commission of Tehran City Council. The daily quoted the councilor as saying that in the last meeting between the city councilors and the Leader efforts to protect green spaces and gardens in Tehran Province were highlighted. To that end, later, the Leader sent letters, among others, to Tehran mayor, the minister of roads and urbanization, the interior minister, and Tehran provincial governor, instructing them to revamp the law to protect greenery. 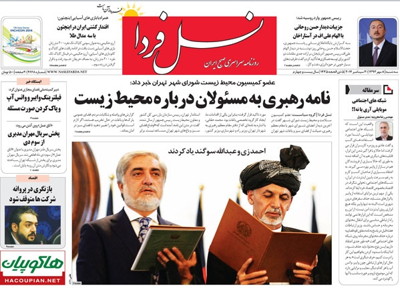 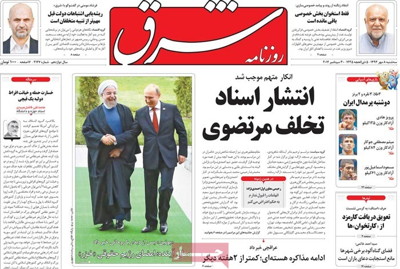 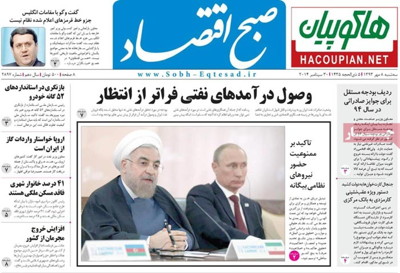 Taadol: “Iran and P5+1 do not seek to go back to the previous conditions,” said Chairman of the State Expediency Council Akbar Hashemi Rafsanjani. 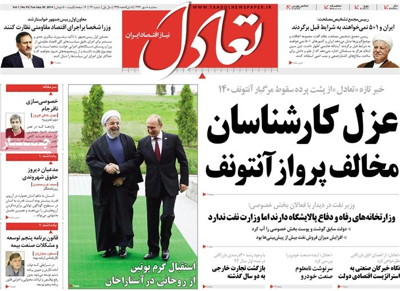