A look at Iranian newspaper front pages on Sept. 29

IFP took a look at front pages of 16 dailies.

Several Iranian newspapers put the gold medal Iranian freestyle wrestler Reza Yazdani bagged for the country in the 2014 Asian Games on their front pages. Also drawing attention was the strong objection of Iranian MPs to unfounded remarks by the British prime minister against Iran.

Abrar:“The press remain exempt from paying taxes,” according to a draft bill approved in parliament. 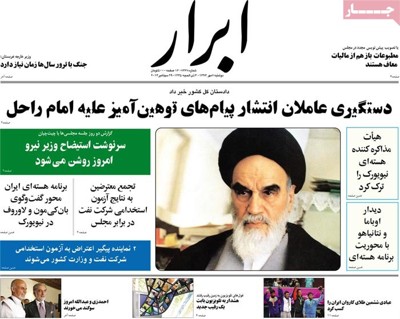 Afkar: “Lebanon’s Prime Minister, Tammam Salam, who met with Iranian President Hassan Rouhani on the sidelines of the 69th meeting of the UN General Assembly, has appealed to Tehran to help Lebanon solve its problems.”

Afkar: “The three Persian Gulf islands [of Abu Musa, the Greater and the Lesser Tunbs] are part and parcel of Iranian territory”, underscored Iran’s UN envoy in reaction to remarks Saturday by the UAE foreign minister who asked for the settlement of Iran-UAE dispute at the International Court of Justice. 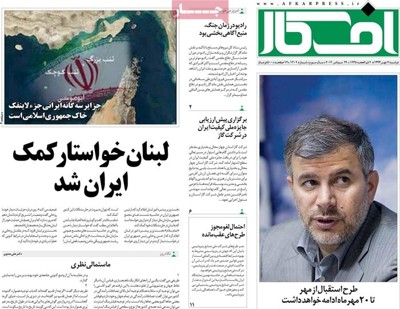 Asr-e Iranian: “The next round of nuclear talks is to be held in Europe.” 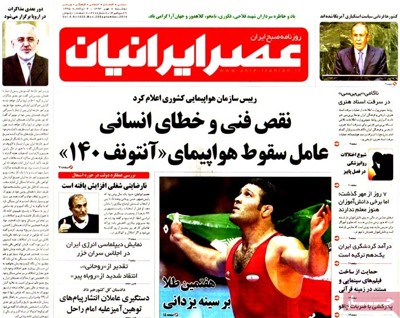 Ebtekar: “Parliament is not the place for clamor,” Parliament Vice-Speaker Mohammad Hassan Abou-Torabi tells Hamid Rasaei, a hardline MP and a member of the Islamic Revolution Stability Front known for his unwavering support for former President Mahmoud Ahmadinejad and his policies.

Ebtekar also takes a look at Babak Zanjani’s corruption case and reports that four ministers who served in Ahmadinejad’s administration have been implicated in the graft case involving the billionaire businessman. 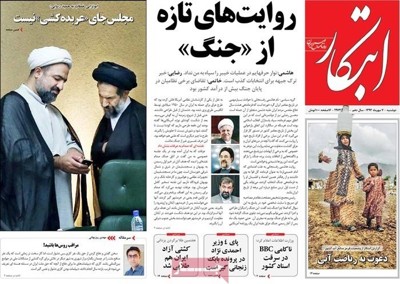 Eghtesad-e Pooyaquotes the managing director of Tehran Regional Electric Company as saying that plans have been drawn up to clear the capital of high-voltage electricity transmission towers, adding to that end Tehran’s electricity network will be transferred underground. 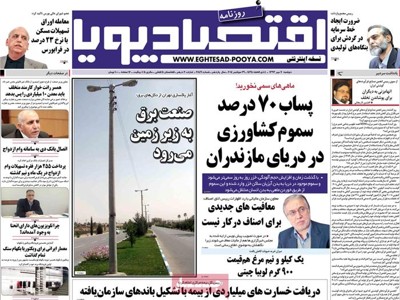 Emtiaz highlights repeated warnings by the health minister on people’s rising intake of oil, sugar and salt which contribute to the leading causes of death in Iran.

Emtiaz: “Plan to increase air fares have been put on hold for the time being,” the director of the Civil Aviation Organization said. 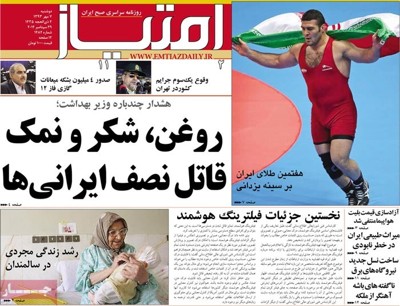 Ettela’at: Iran hasn’t had a hand in the AMIA bombing, said Argentina’s President Cristina Kirchner in reference to a 1994 attack on a Jewish center in Buenos Aires which killed 85 people and injured hundreds.

Ettela’at: Human error and technical glitch are to blame for the crash in early August of Iran-140 (Antonov-140) passenger plane in Tehran.

Ettela’at also reported that a park in Tehran hosted a conference Sunday on Iranian painting and the environment in the artistic works of Master Mahmoud Farshchian, a renowned painter. 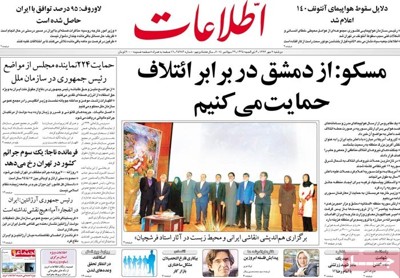 Farhikhtegan cites the first vice-president as saying in a meeting of the Supreme Article 44 Council [which deals with privatization of state companies] that the eleventh government has fared well in ceding state agencies to the private sector. He also said the 35 percent growth the Rouhani administration has posted in a year on privatization equals what previous governments did in 12 years. 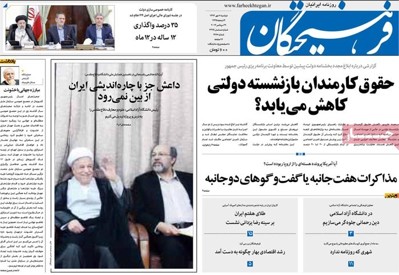 Hambastegi: “The eleventh government is determined to implement a plan on insurance coverage for the media” said the deputy minister of culture and Islamic guidance for media affairs.

Hambastegi: “The Americans have admitted that they cannot destroy ISIL without Iran’s help” Chairman of the Expediency Council Ayatollah Akbar Hashemi Rafsanjani said in an Islamic Azad University meeting. 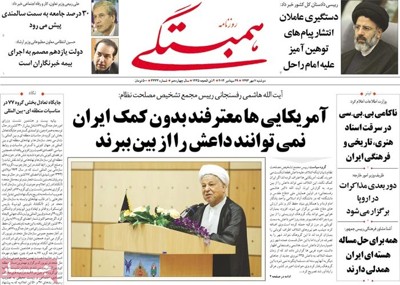 Jahan-e Sanat: “The first tourism train is to cross the border into Iran Monday,” is a front-page headline that says the train with 130 tourists on board originates from Istanbul, Turkey and crosses the border into western Iran at Razi Border Crossing.

Jahan-e Sanat: Dick Costolo, the CEO of Twitter Inc., has said in a tweet that he has talked on the phone with Iran’s Foreign Minister Zarif to have the ban on the social networking service in Iran removed. 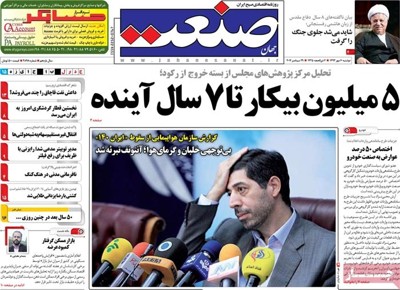 Javan: “Shouts of ‘Down with Britain’ are echoed in the Islamic Consultative Assembly”, is the daily’s top pick for its front page. Jomhouri Islami: Iran doubled the revenues it collects from gas condensates in the first half of the Iranian calendar year (starting March 21, 2014), according to an official report by the Pars Special Economic Energy Zone.

Jomhouri Islami: President Rouhani predicts upon arrival in Astrakhan that the 4th Summit of Caspian states will produce acceptable results. 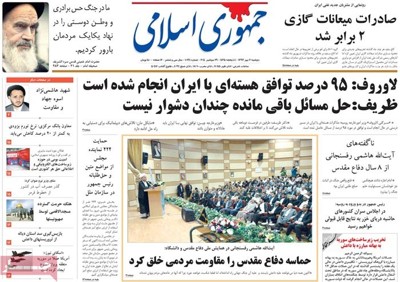 Kayhan: Separate operations by Peshmerga, local and volunteer forces, as well as the Iraqi army take back the control of 29 villages from ISIL militants in northern Iraq. 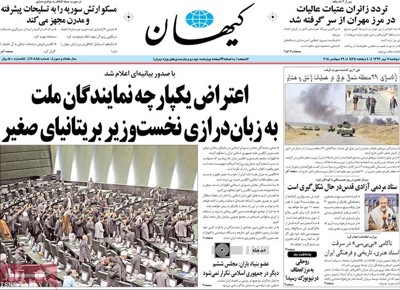 Nasl-e Farda: Foreign Minister Mohammad Javad Zarif is due to submit a report to the Iranian parliament on the UN General Assembly, New York nuclear talks, and the Caspian summit when he is back home from the Russian city of Astrakhan. 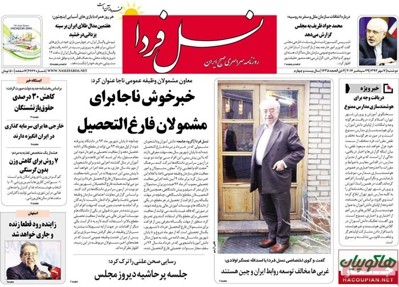 Roozan: “The upstarts are trying to use the [Iran-Iraq] war as a tool to eliminate others,” said former President Mohammad Khatami.

Roozan: “Clamor in the House of People”, is a front-page story on new demands by Hossein Allah Karam, a key member of Ansar-e Hezbollah, who calls for the ouster of President Hassan Rouhani and dismissal of Foreign Minister Mohammad Javad Zarif. It further quotes Hamid Rasaei as saying, “I will not stay in a place where I am called a clamorer.” 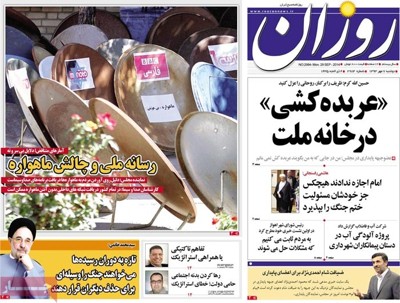 Sharq features an exclusive interview with Niels Annen, a member of the Social Democratic Party of Germany (SPD) in which he says his country shares security concerns with Iran.

Sharq: A member of the Iranian parliament’s presiding board says back in 2011 when the Iranian foreign currency market was undergoing sudden fluctuations some $11 billion was sold by brokers on the black market with the support of certain managers of the Central Bank of Iran. 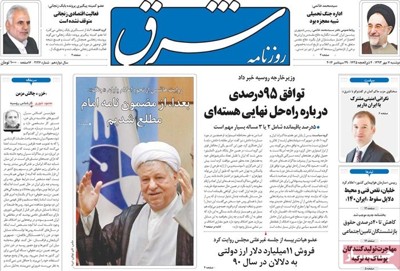