A look at Iranian newspaper front pages on Sept. 27

The speech of the Iranian president at the UN General Assembly and the gold medal Iranian heavyweight weightlifter grabbed in the Asian Games in South Korea dominated the front pages of a majority of Iranian newspapers on Saturday (September 27). Also remarks by Supreme Leader Ayatollah Seyyed Ali Khamenei on Sacred Defense and talks between Iran, the US and Europe were given front page coverage by several Iranian dailies.

Abrar:“Iran does not need the permission of anybody to help Iraq boost its development and security,” said President Rouhani.

Abrar: “The sports minister is likely to be impeached in case of a delay in the privatization of Persepolis and Esteghlal, [the capital’s two main football clubs].” 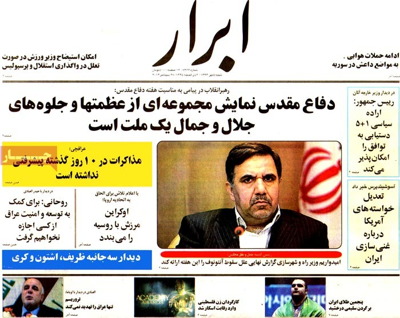 Aftab-e Yazd: “Moves by the government’s opponents to make the most out of murky waters” was highlighted by the daily to report on the harsh reactions by hardliners to unfounded remarks by the British premier at the UN General Assembly on Iran. 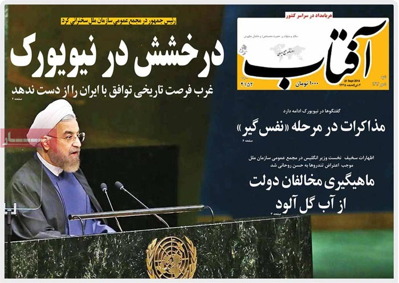 Asia: “Dr. Rouhani invites American businessmen to invest in Iran”, is the daily’s pick for its front page. 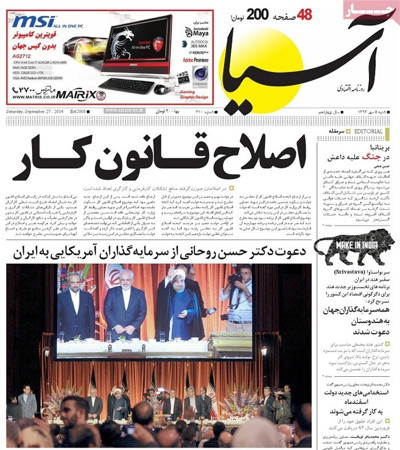 Asrar covers different stories on its front page, among them:

“The previous government has left [its successor] with billions [of tomans] in red ink”, said an Iranian MP.

“The university security is not allowed to intervene in executive affairs,” said Hamid Mirzadeh, the president of the Islamic Azad University.

“US nuclear negotiator Wendy Sherman hopes she can one day make a trip to Iran.” 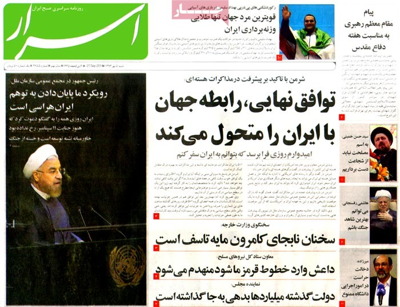 Ebtekar: “Nuclear talks have reached a breathtaking point,” said the daily, adding thatit seems more likely for the US to soften its demands as far as enrichment is concerned. 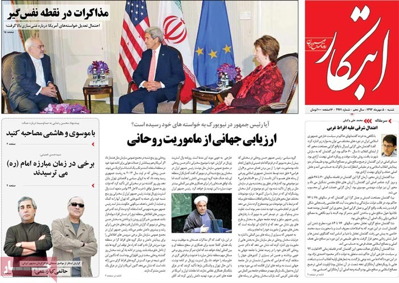 Emtiaz: “The factories which pollute the environment will be subject to shutdown,” said the deputy head of the Environment Protection Organization. 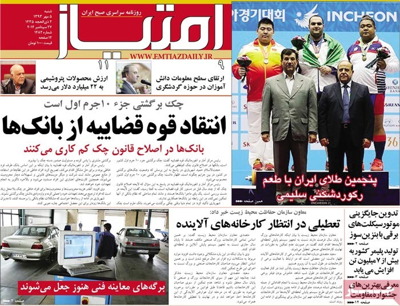 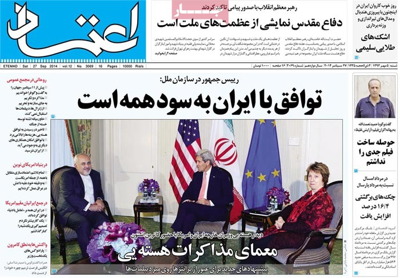 Ettela’at focused on remarks by President Hassan Rouhani at the UN General Assembly in New York quoting him as saying that arriving at a nuclear agreement with Iran would be a historic opportunity for the West.

Ettela’at dedicated part of its front page to Iran’s economic growth saying that it has risen to 4.6 percent. 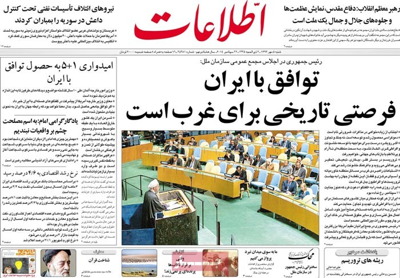 Farhikhtegan: “Corruption bubbles up and is institutionalized when bravery is suppressed,” said Seyyed Hassan Khomeini, a member of the Board of Trustees at the Islamic Azad University. 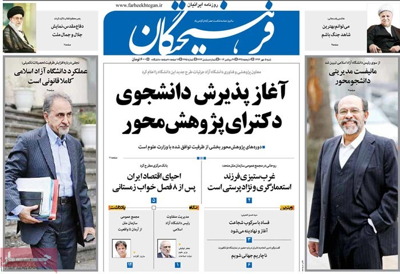 “Democracy is the product of growth and development, and not war and aggression.”

“The Middle East has a thirst for development and is weary of war.”

“It is a dire necessity to avoid acquisitiveness in [nuclear] talks.”

“The moderate-minded elite in the Middle East can build the strongest coalition against violence.”

“An agreement with Iran would serve the interests of all.”

“The solution to [Iran’s nuclear dispute] lies in holding talks and showing respect, and not in imposing sanctions and pursuing conflict.” 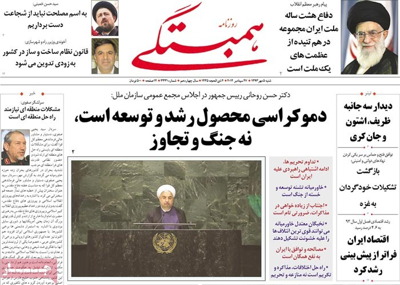 Hemayat took a look at reactions in Tehran to remarks by British Prime Minister David Camron on Iran at his UN General Assembly speech. It highlighted calls by some MPs for the reopening of the British embassy in Tehran to be put on hold.

Hemayat put a report on its front page on fruit prices in Iran, saying the fact that Iran may export fruits to Russia as part of the two countries’ efforts to have closer trade ties has sparked an almost 10% rise in prices. 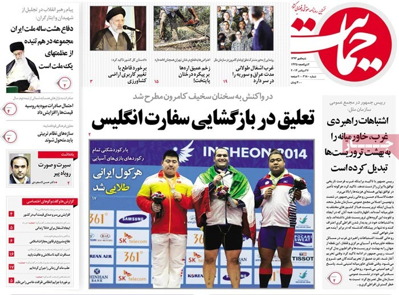 Iran: “To go ahead with sanctions against Iran is a strategic mistake”, President Rouhani said in his UN General Assembly speech. 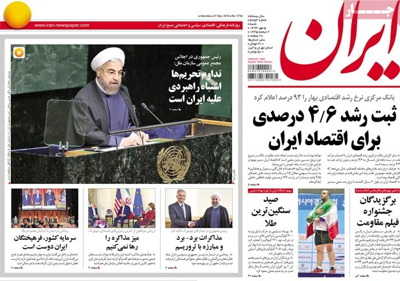 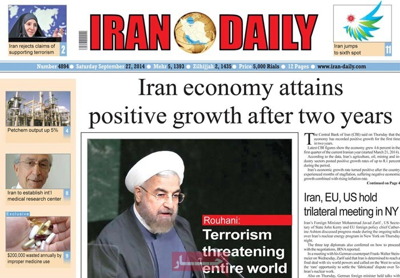 Javan: “Conflicting nuclear signals are sent from New York,” wrote the daily. It quoted Iran’s nuclear negotiator Seyyed Abbas Araghchi as saying that no progress was made in the nuclear talks in New York. Those comments were in contrast with remarks by US Under-Secretary of State Wendy Sherman who said progress is being made in nuclear talks.

Javan: “Ten-hour-long pleasure the Iranian reformist papers took from a historic meeting,” is the sarcastic title the daily has picked for its front page, examining the time span between a meeting between Iran’s president and the British prime minister and the latter’s speech at the UN General Assembly in which he made baseless accusations against Iran. 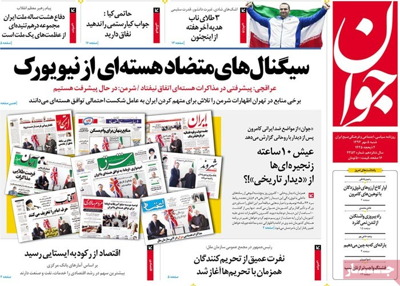 Kar va Kargar: “The Labor Caucus is to hold an ad hoc session to look into the problems the workers are currently facing,” said Alireza Mahjoob, the Secretary General of the Labor House. 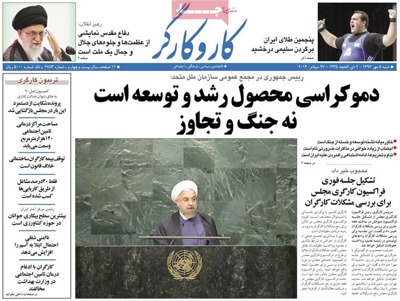 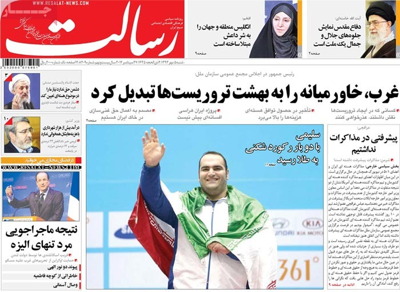 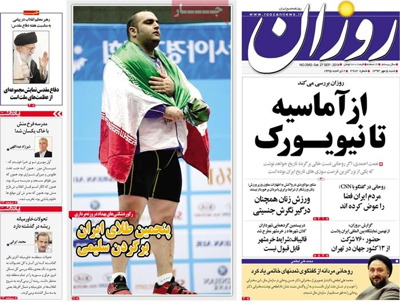 Sharq: “New nuclear offer by the US to Iran,” is the headline the daily has given to a front page report on the new US proposal. 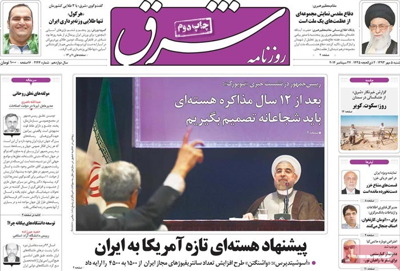 Tehran Times: “A 200% rise in number of foreign tourists visiting Iran,” said the deputy director of the Cultural Heritage, Tourism and Handicrafts Organization. 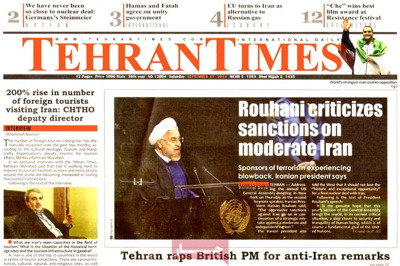 Vatan-e Emrooz: “Parliament’s opposition to the fee the Central Bank of Iran has decided to charge for transactions involving debit card readers.”

Vatan-e Emrooz: “The US bombardment of Syria’s oil installations” is another front page story in which the daily reviews the expanded airstrikes against ISIL militants. 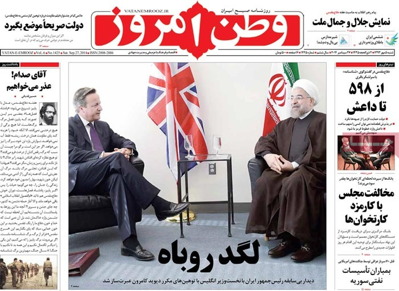