A look at Iranian newspaper front pages on Sept. 22

Iranian dailies on Monday mainly gave coverage to two news stories: President Rouhani’s meeting with the Supreme Leader ahead of his departure for New York to attend the UN General Assembly and a power-sharing agreement in Afghanistan between Ashraf Ghani Ahmadzai and his rival Abdullah Abdullah. Under the deal announced by the Afghan Independent Elections Commission, Ghani is the new president of Afghanistan and his contender will act as CEO.

Abrar: “Iran has refuted claims that it asked Kuwait to mediate for its presence in the anti-terrorist coalition against ISIL.” 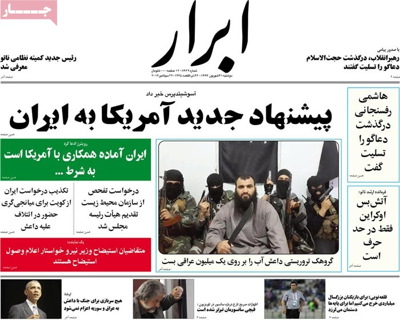 Abrar-e Eghtesadi: “The government is yet to make a decision on whether to raise bread prices.” 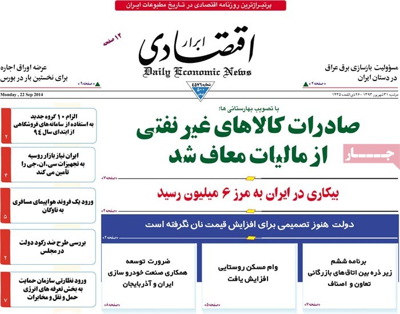 Aftab-e Yazd: “Unity between principlists is impossible” is a report that suggests as long as one segment of the faction condemns others, the prospects of staying as one would be remote. The article provides one example of disagreement within the faction and says the Islamic Revolution Stability Front thinks of itself as the main current and of others as marginal.

Aftab-e Yazd: “We did not give [Mehdi] Chamran [the chairman of Tehran City Council] a blank check,” said a principlist city councilor. He added principlists voted for Chamran, expecting him to exercise stricter supervision of Tehran Municipality. 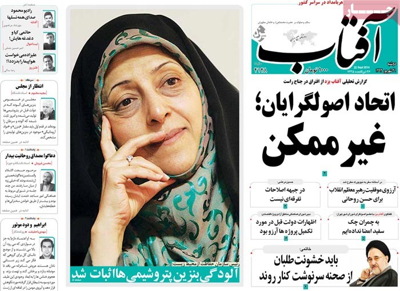 Arman-e Emrooz: “We cannot hold Khatam al-Anbia [an Iranian engineering firm run by the Islamic Revolution Guard Corps] accountable,” said Vice President Akbar Torkan. His comments came after the firm, one of the biggest contractors in the country, registered only a 3 percent progress in a project – which was already one year behind schedule. The contractor secured the deal on the condition of attracting foreign investment, but most recently it admitted it has failed to do so.

Arman-e Emrooz: “A new chapter in Iran-Saudi relations,” is the title of a news story about a one-hour meeting between Iran’s Foreign Minister Mohammad Javad Zarif and his Saudi counterpart Saud al-Faisal on September 21. 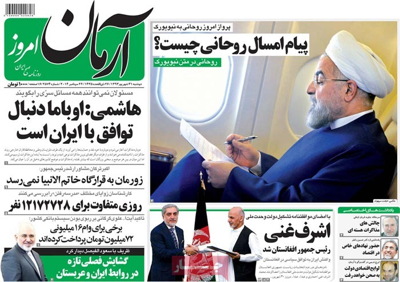 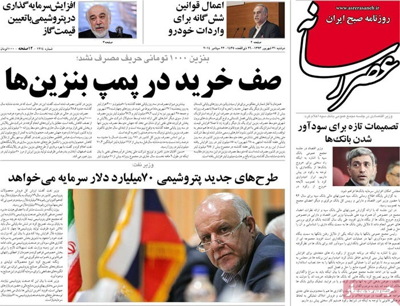 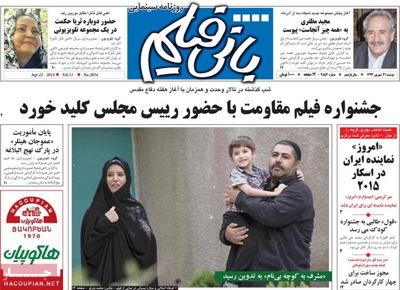 Ebtekar: “The report of carcinogenic gasoline on parliament speaker’s desk” refers to a debate over the quality of gas produced by Iranian refineries. After officials under Ahmadinejad refuted claims that the petrochemical gas was the main culprit in air pollution, Parliament Speaker Ali Larijani tasked the parliament’s Health Committee to carry out an investigation into the case. The results of the report indicated that the gas produced by Iranian petrochemical facilities contained benzene and other hazardous substances. The final decision is going to be made by the Judiciary.

Ebtekar: “President Rouhani paid a visit to the Supreme Leader before he leaves Tehran for New York later today.”

Ebtekar: “Advocates of Ahmadinejad preparing for 2017 presidential election campaign” is the headline that implies the former president and his supporters are steeling for the 12th presidential vote. His recent speech and comments by those close to him suggest they are getting prepared to bring him back onto the political landscape. 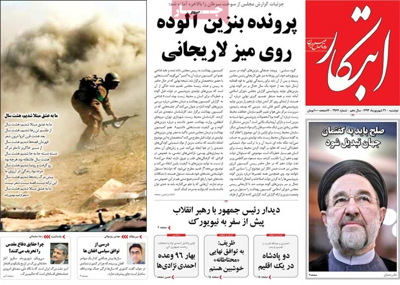 Eghtesad-e Pooya: “Eight aircraft and helicopters have been added to Iran’s air fleet.”

Eghtesad-e Pooya quoted the commander of the Cultural Heritage Organization’s Protection Division as saying, “The largest haul of cultural heritage items has been seized in a special operation.” 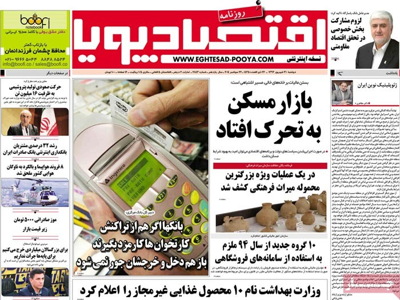 Emtiaz: “Thirty thousand kilometers of roads across Iran will be equipped with speed cameras.” 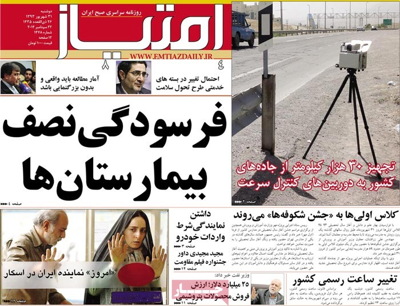 Etemad: “Foreshocks of a likely meeting” is the story that the daily leads on, featuring comments by some principlists about the probable meeting between Presidents Rouhani and Obama. 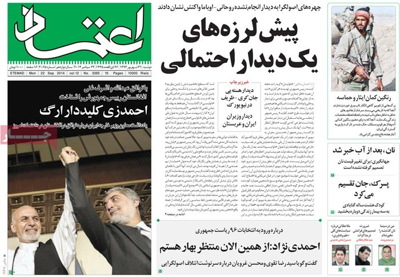 Ettela’at: “The West should not have a business-minded approach to the nuclear talks [between Iran and P5+1],” said Parliament Speaker Ali Larijani.

Ettela’at: “Iran’s super advanced submarine and destroyer will be unveiled by November 28,” said Commander of the Naval Forces of the Iranian Army Rear Admiral Habibollah Sayyari. 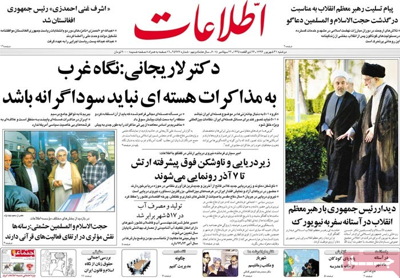 Farhikhtegan: “The looming water crisis in Tehran is serious; eastern Tehran has water supplies enough only for two weeks.” 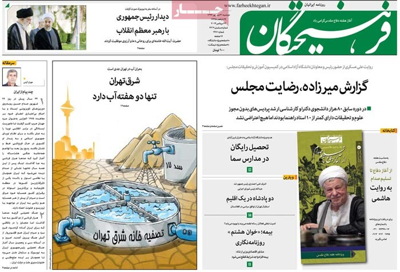 Hadaf va Eghtesad: According to a new bill approved by the Islamic Consultative Assembly, revenues from non-oil exports will be tax-exempt. 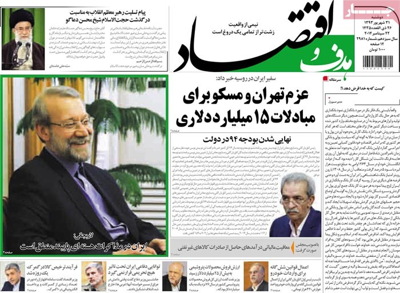 Hambastegi: “News websites which have no license to operate will be blocked,” said Minister of Culture and Islamic Guidance Ali Jannati. 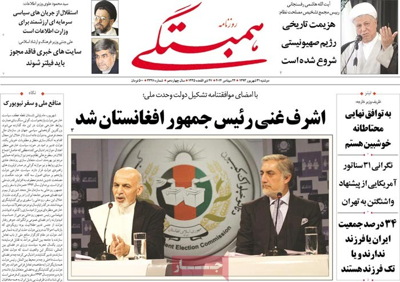 Hamshahri: “Central Bank of Iran gives a shock to electronic banking” is the headline the daily put on its front page after the Central Bank announced that as of October 23 shops which use debit card readers will have to pay transaction fees. 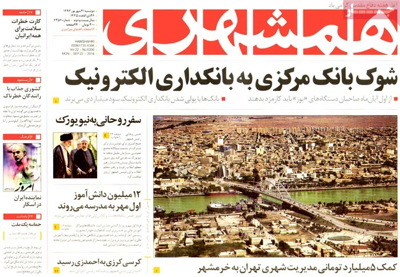 Hemayat: “The Judiciary system will take on cybercrimes in earnest,” is the headline the daily put on its front page after the judiciary spokesman issued a one-month deadline for the minister of communications to block some mobile applications, a move which was welcome by some MPs and experts. 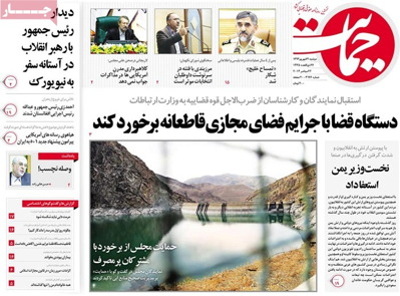 Kayhan: “Momentous days; members of the Yemeni presidential guard have joined the revolutionaries.”

Kayhan: “Hundreds of ISIL terrorists were killed in a massive offensive launched by the Iraqi army.” 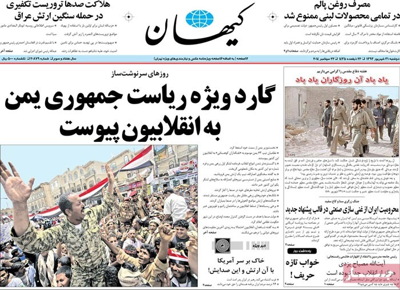 Quds: “Revenues of medical tourism is 10 times more than those of conventional tourism.” The daily also highlighted the fact that global revenues that the medical tourism fetches stand at $100 billion. 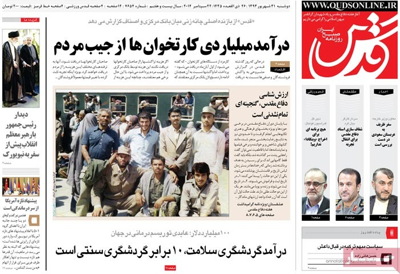