A look at Iranian newspaper front pages on Oct. 7

IFP has taken a look at the front pages of Iranian dailies on Tuesday and picked headlines from 20 of them.

The comments of two top Iranian politicians appeared on the front pages of Iranian dailies on Tuesday. President Rouhani told a National Conference on Rural Areas that banks should play a more prominent role in rural development by offering more loans to nomads and villagers. Chairman of the State Expediency Council Akbar Hashemi Rafsanjani advised officials to enliven the youth if they are after a lively society. 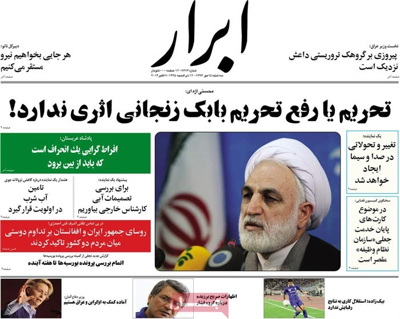 Afkar: “The election law was crafted in the 1980s and will be reformed,” said the deputy interior minister. 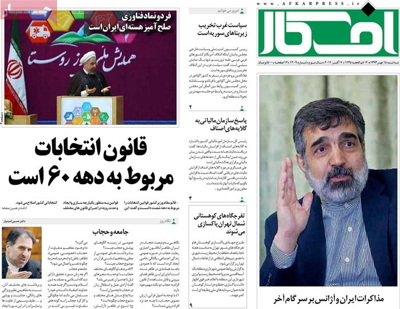 Aftab-e Yazd: “The repeal of an asset freeze [targeting Iranian individuals and institutions] was the result of a meeting between President Rouhani and David Cameron,” said former Iranian diplomat Ali Khoram. 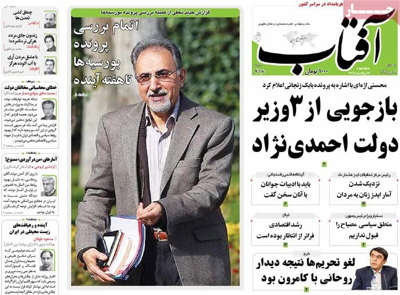 Arman-e Emrooz: “Women should prepare for the upcoming parliamentary elections by finding themselves a berth on the tickets of political factions,” said Vice President for Women and Family Affairs Shahindokht Molaverdi.

Arman-e Emrooz: “Promising negotiations led by Zarif is a nightmare for hardliners.” 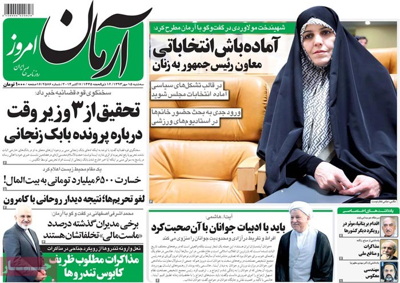 Asrar: “Negotiations between Iran and the International Atomic Energy Agency to resolve the outstanding issues get underway today.” 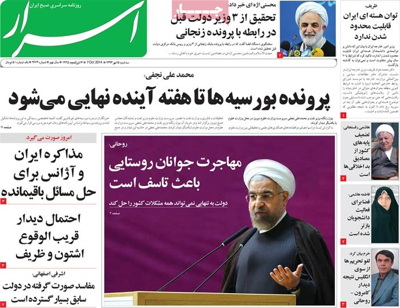 Ebtekar: “Three ministers of Ahmadinejad’s Cabinet are under investigation in connection with a case in which billionaire Babak Zanjani is charged with corruption,” said the Judiciary spokesman.

Ebtekar: “The investigation into the case involving those who were granted scholarships without meeting requirements [during Ahmadinejad’s presidency] is entering its home stretch. Those who have violated the rules will be banned from carrying on their education,” said acting Minister of Science, Research and Technology Mohammad Ali Najafi. 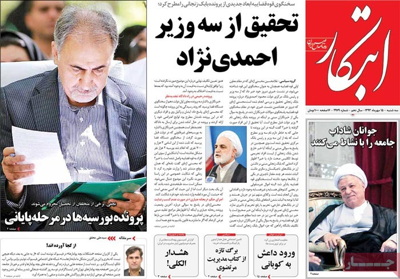 Ettela’at: “We seek to secure balanced, comprehensive and sustainable development,” said President Rouhani at a National Conference on Rural Areas.

Ettela’at: “The largest planetarium in the Middle East has opened in Tehran.”

Ettela’at: “ISIL attacks on Hezbollah bases in eastern Lebanon were repelled; sixteen terrorists were killed in the clashes.”

Ettela’at: “Presence of Djamila Boupacha – the Algerian freedom fighter – at the Mausoleum of Ayatollah Khomeini to pay tribute to the founder of the Islamic Republic.” 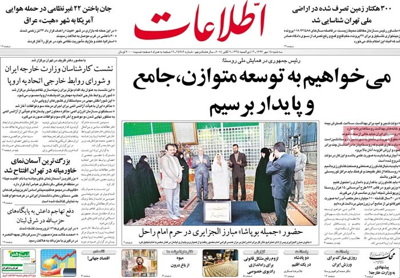 Hadaf va Eghtesad: “Taxation will be streamlined,” said the head of the Iranian National Tax Administration. 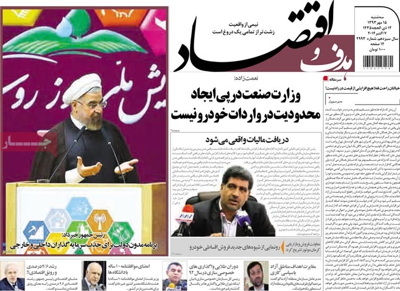 Hambastegi: “If it wasn’t for Iran’s support, Baghdad could have fallen [to ISIL terrorists],” said Foreign Minister Mohammad Javad Zarif.

Hambastegi: “The volume of overseas trade posted a 22 percent growth between March 21 and September 22, 2014,” said Director of the Trade Promotion Organization of Iran Valliollah Afkhamirad. 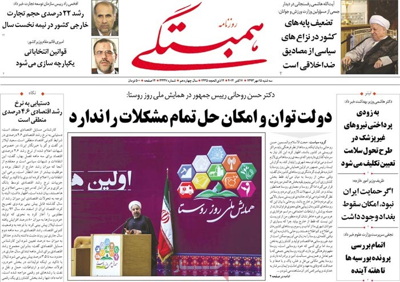 Hamshahri: “Farming in Iran consumes three times as much water as the global average.” 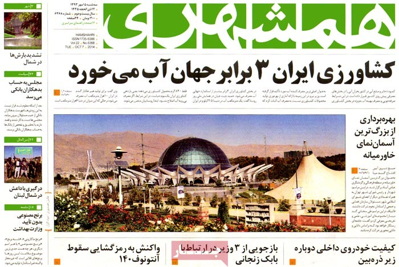 Hemayat: “An Iranian-developed vaccine against foot-and-mouth disease was unveiled.” 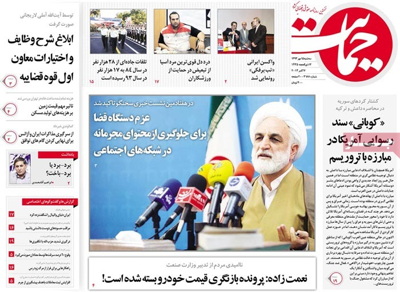 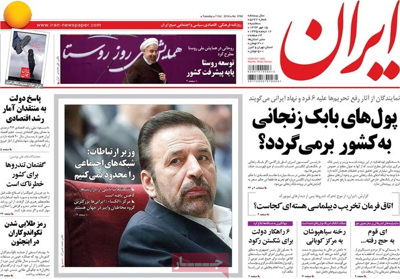 Jahan-e Sanat: In reaction to the repeal of an asset freeze by an EU court on Iranian billionaire Babak Zanjani, who is heavily indebted to the Oil Ministry, the Judiciary spokesperson said, “He does not have any money abroad.”

Jahan-e Sanat: “No one can trample on the legitimate and legal rights of different sects,” said Ali Younesi, an adviser to President Rouhani. 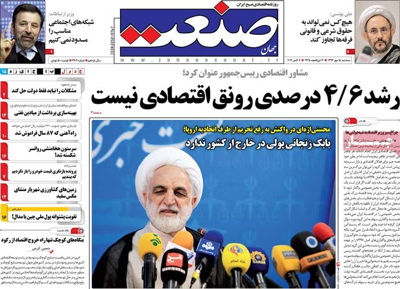 Jamejam: “Islamic Azad University admits doctoral candidates three times more than before.” Experts believe the recent rise in the number of its admissions will only raise the number of Ph.D. holders. 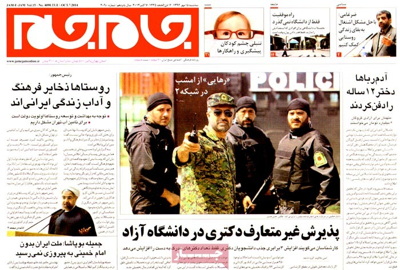 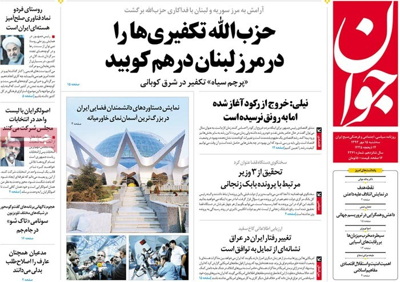 Kar va Kargar: “The economy will have registered a 3 percent growth by March 21, 2015,” predicted an economic advisor to President Rouhani. 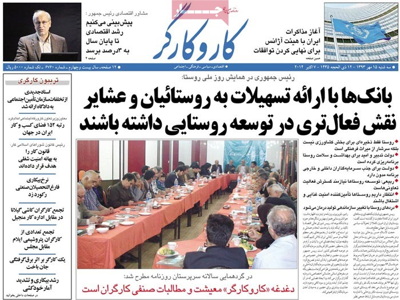 Kayhan: “Sina Bank has sought compensations from the European Union [for the bans it imposed on the Iranian bank].” 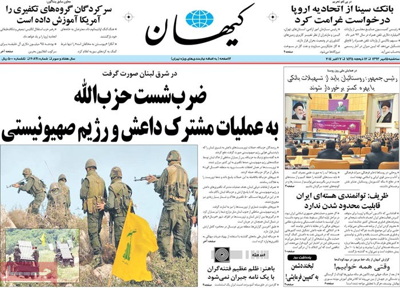 Roozan: “An explosion in the east of Tehran; the Defense Industries Organization announced that the blast was the result of chemical reactions between combustible materials.” 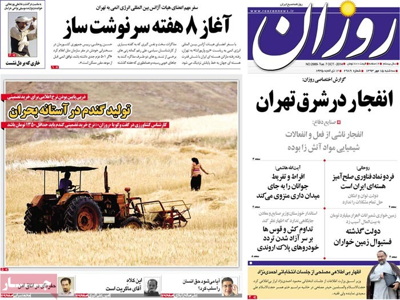 Siasat-e Rooz: The daily takes a swipe at the government of President Rouhani by saying, “The tight knot of mismanagement cannot be untied by nuclear talks.” 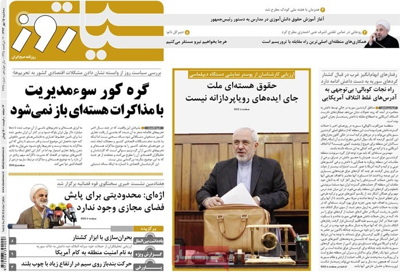 Tafahom: “[The rights of] media should be taken into account while crafting the comprehensive media law,” said Deputy Minister of Culture and Islamic Guidance Hossein Entezami. 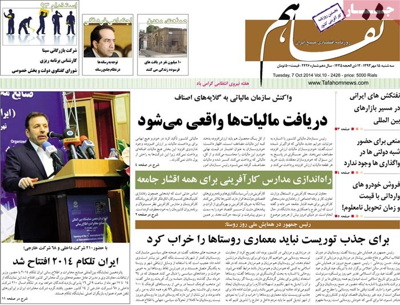