A memorial service for the late Ayatollah Mohammad Reza Mahdavi Kani attended by Islamic Revolution Leader Ayatollah Seyyed Ali Khamenei was placed by several newspapers on their front pages. Also in the news were remarks by senior nuclear negotiator Seyyed Abbas Araghchi that Iran won’t step back from its atomic rights as well as a message by Chairman of the Expediency Council Ayatollah Akbar Hashemi Rafsanjani to the Saudi King on the death sentence for top Shiite cleric Nimr al-Nimr. The ramifications of recent acid attacks in Isfahan and the Cabinet’s report on illegal scholarships granted by the science ministry of the previous administration also made headlines in a majority of newspapers on Sunday.

Abrar-e Eghtesadi:“Italy only buys crude oil from Iran,” is the banner headline of the daily quoting Italian authorities on trade with Iran.

Abrar-e Eghtesadi: “Housing market is lifting itself out of the depths of stagnation.”

Abrar-e Eghtesadi: “Utility prices are likely to be raised next year.” The energy minister has put forward a plan for the next Iranian calendar year (starting March 2015) to raise the fees Iranian households and businesses will have to pay for electricity and water. 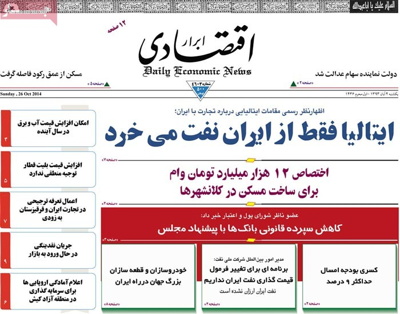 Afarinesh: “Those who have made Iran-140 passenger planes should be held accountable,” said Tehran’s Public and Revolutionary Courts Prosecutor. 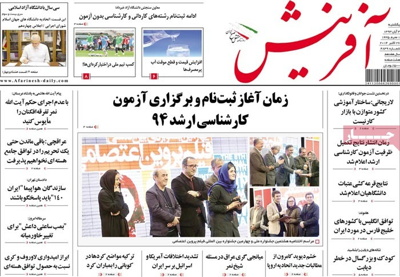 Afkar reports that around $8 billion in loans will be granted in two phases to small industries.

Afkar: “Iran will not retreat even one step from its nuclear rights,” said Iran’s Deputy Foreign Minister Seyyed Abbas Araghchi. 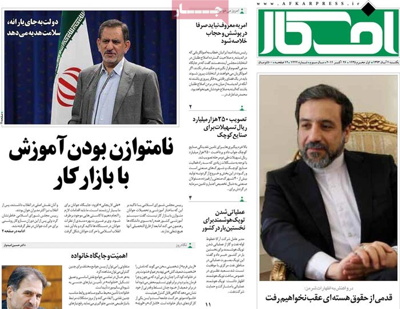 Arman-e Emrooz: “[Fatemeh] Fatemeh Motamed-Arya is on her way to Oscars,” writes the daily. The famous Iranian actress has a [leading] role in Nabat, directed by Azeri filmmaker Elchin Musaoglu which has been nominated for the Oscars. 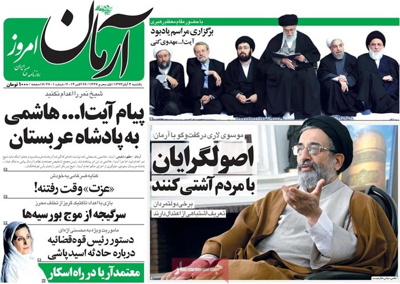 Asia: “As many as 46 giant Italian firms are to return to Tehran shortly,” said the chairman of Iran-Italy Joint Chamber of Commerce.

Asia: “Iran will not accept sanctions to remain in place, not even one of them,” said Iran’s senior nuclear negotiator, Seyyed Abbas Araghchi.

Asia: “A train carrying American tourists is due to arrive in Iran.”

Asia quoted First Vice-President Eshagh Jahangiri as saying that the stage is being set in Iran to take in more and more foreign investment. 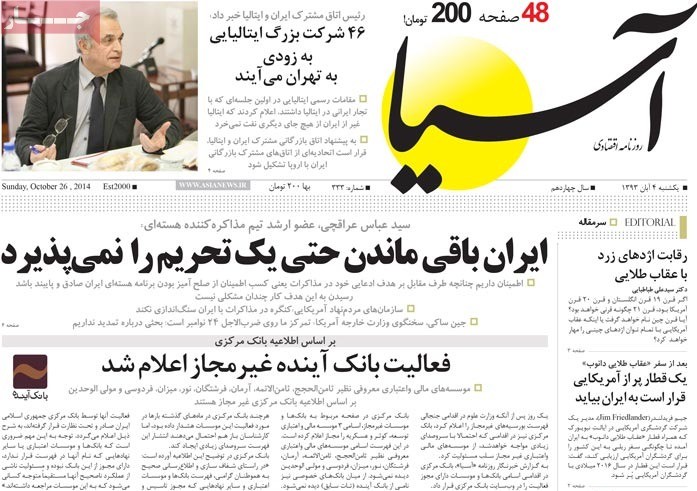 Asr-e Eghtesad: “Iran will not have a budget deficit in excess of nine percent this year,” said the chairman of the Planning and Budget Committee of Iran’s parliament about the current Iranian year which ends on March 20, 2015. 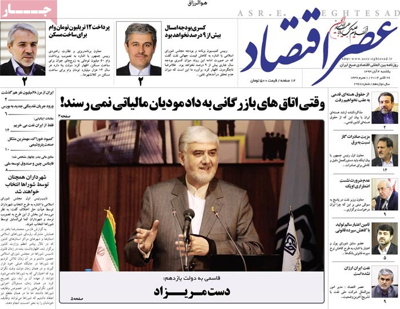 Ebtekar: The Leader of the Islamic Revolution has praised the Iranian team for their superb performance and the colorful medals they have won in the 2014 Asian Para Games in Incheon, South Korea.

Ebtekar: “Do not pin much hope on disqualification of reformists,” said Mohammad Reza Aref, a vice-president in Mohammad Khatami’s Cabinet, in comments aimed at principlists. His comments came in response to rumors that the Guardian Council is likely to disapprove the bulk of reformists contesting legislative elections due to be held in March 2016.

Ebtekar: “Let the dividers [among Muslims] be overcome with despair by overturning the death sentence of top Shiite cleric Nimr al-Nimr,” read a message by Chairman of the Expediency Council Ayatollah Akbar Hashemi Rafsanjani to Saudi King Abdullah. 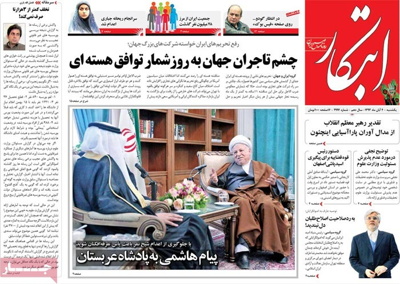 Esfahan Emrooz: “The [Golden Eagle Danube] Express carrying European tourists has arrived in Isfahan,” wrote the daily, adding that more than 60 passengers from nine countries are on board the first European train to visit Iran. 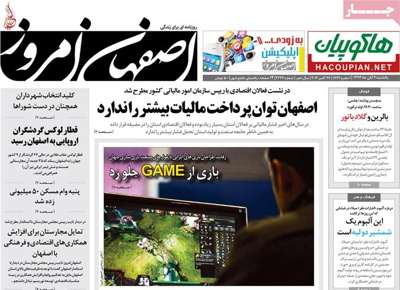 Etemad:“[The release of] a report on the scholarships was courageous,” said Ahmad Tavakkoli, a Tehran MP and a vocal critic of former President Mahmoud Ahmadinejad. 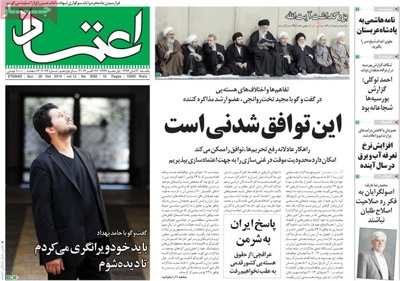 Ettela’at: “The collegiate community has welcomed the release [by the Iranian Cabinet] of a report on [illegal] scholarships.”

Ettela’at: “Iranian pensioners will not be charged for the healthcare services they receive as of mid-November.” 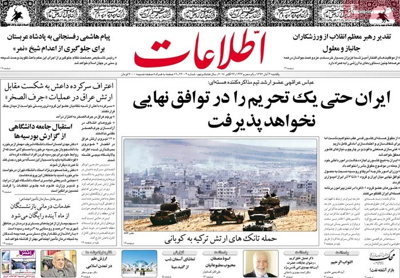 Hambastegi: “Reformists will have a strong presence in the upcoming parliamentary elections,” said Mohammad Reza Aref, the chairman of the Omid Iranian Foundation. 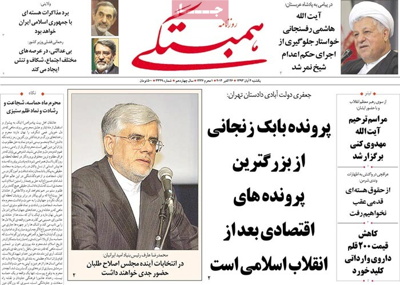 Hemayat: The Judiciary chief has tasked his deputy Gholamhossein Ejei to follow the case involving a spate of acid attacks in Isfahan. 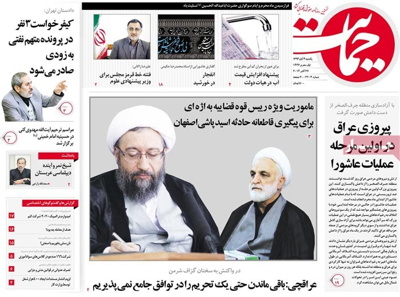 Iran: “The water level at the Lake Urmia has risen by 23 cm following a recent rainfall in the region.” 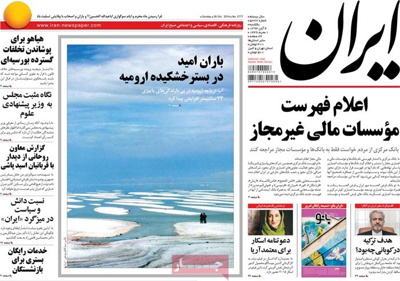 Jahan-e Sanat: “Talks are held between FAO and Iran’s agriculture minister.” The UN Food and Agriculture Organization has plans to fight drought in Iran. 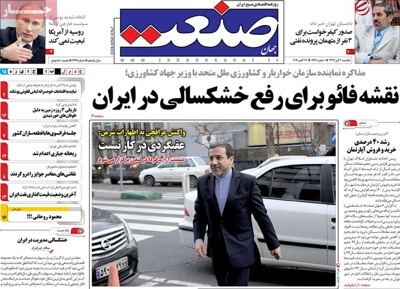 Jamejam: “If acid attacks are meant to terrorize the public, they amount to Moharebeh [waging war against God],” said Seyyed Ebrahim Raeisi, the prosecutor general. Kayhan: “The decision to grant scholarships to students without requiring them to take tests was made by the science minister of the Reformist cabinet [of President Mohammad Khatami].” The daily is taking a jab at the government of President Rouhani for releasing the names of individuals who were granted the scholarships when President Ahmadinejad was in office. Mardomsalari: “Iran will not be the party to leave the [nuclear] negotiating table,” said Ali Akbar Velayati, the foreign policy advisor to the Supreme Leader and a former Iranian foreign minister. 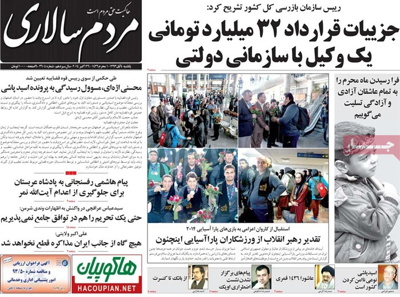 Shahrvand: “As many as 30 oil tankers have rolled over in Lorestan province over the last seven months, discharging several thousand liters of oil into the province’s soil and water resources.

Shahrvand: “Good nutrition and health have taken the place of a planned rise in subsidies,” said Vice President Eshagh Jahangiri, referring to the cash handouts the Iranian government pays each month to qualified families.

Shahrvand: “The Saheb Gharani-e Palace (in Niavaran Complex) has developed cracks.” Reports have come out in recent days that big cracks have run up the northern flank of the Mirror Pavilions of the palace. 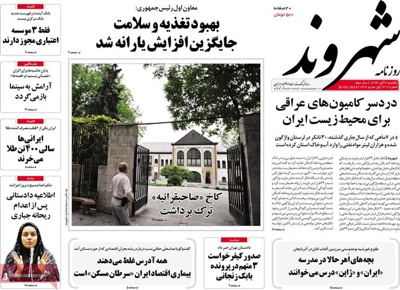 Sharq: “Untold stories about the assassination of a banker of Iranian origin in Malaysia,” is the daily’s banner headline, shedding light on the mystery death of Hossein Ahmadnejadi, a 75-year-old Iranian-Bahraini, who was shot dead in a parking lot on July 29, 2013 when he, accompanied by his wife, was departing a Chinese temple in Kuala Lumpur. 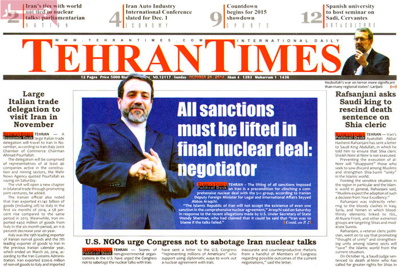