A look at Iranian newspaper front pages on Oct. 19

IFP has taken a look at the front pages of Iranian dailies on Sunday and picked headlines from 19 of them.

A decree issued by the Supreme Leader to resume the new term of the Supreme Cultural Revolution Council generated front-page headlines in the Iranian dailies on Sunday. A fierce backlash from Iranian clerics in reaction to the death sentence by a Saudi court for Sheikh Nimr al-Nimr, a senior Shiite cleric, was under the spotlight of the newspapers too. News of a series of acid attacks on women in Isfahan, in central Iran, was also among the top stories of the day.

Abrar: “The Lebanese defense minister has arrived in Tehran.”

Abrar: “The foreign currency exchange rate will see a decline,” said Governor of the Central Bank of Iran Valiollah Seif. 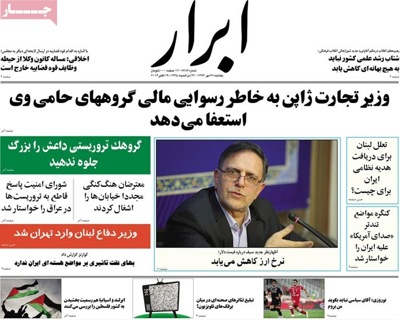 Aftab-e Yazd: “What went behind the scenes of the transfer of pieces from the Memorial Museum of Iranian Presidents” is the headline of the daily which deals with the controversy sparked off two days before President Rouhani’s swearing-in ceremony. The newspaper reports that on August 2, 2013, eight trucks waited outside the museum at Sa’dabad Palace to transfer to another place 2,530 gifts given to former President Ahmadinejad by foreign officials during his overseas visits. 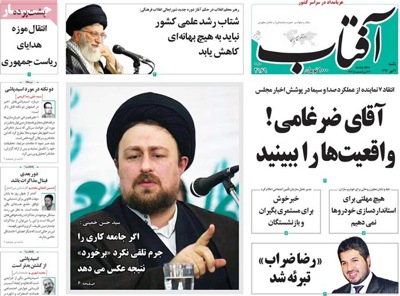 Arman-e Emrooz: “A number of spies [who held crucial positions and had access to sensitive information] in Yazd Province, have been arrested,” said the director general of the provincial Intelligence Department.

Arman-e Emrooz: “I have forgiven my assailants,” said Saeed Hajarian, a reformist intellectual, a journalist and a former advisor to President Khatami who was shot in the face by an unknown assailant on March 12, 2000. Although he managed to escape death, he was left severely disabled in the aftermath of the attempt on his life. 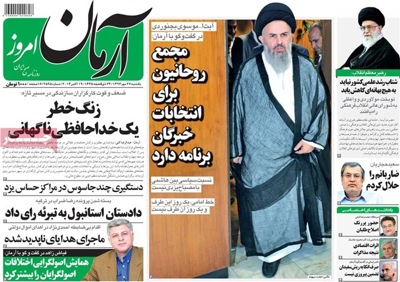 Asia: British Petroleum, Eni [an Italian multinational oil and gas company headquartered in Rome] and Statoil [a Norwegian oil and gas juggernaut] are ahead of their European rivals to purchase Iran’s oil and natural gas. 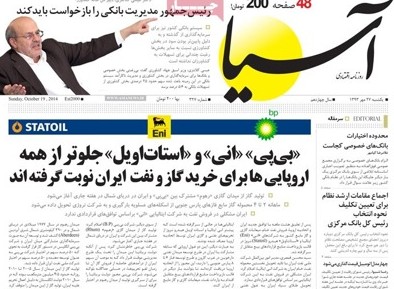 Ebtekar: “Iran’s scientific growth must not lose momentum for any reason,” instructed the Supreme Leader in his decree on the resumption of the new term of the Supreme Cultural Revolution Council.

Ebtekar: “Suspicious acid attacks; who carries out these attacks on girls and women in Isfahan?” 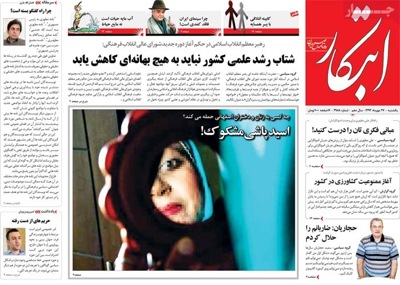 Eghtesad-e Pooya: “In terms of affordable tourism, Iran is in the lead in the world,” said the head of the Cultural Heritage, Handcrafts and Tourism Organization. Ettela’at: “The resumption of gas production on Rhum gas field, owned by BP and Iran’s National Oil Company, in the North Sea after a 4-year hiatus.” The moratorium was imposed by Britain in 2010 on the back of sanctions against Iran.

Ettela’at: “A huge outcry of Iranian clerics against a death sentence [handed down by a Saudi court] for Sheikh Nimr al-Nimr, a Shiite cleric.” 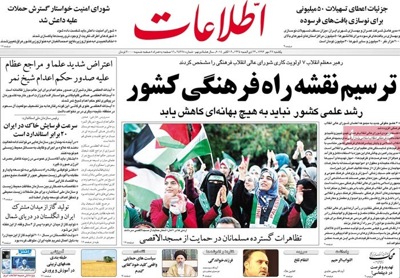 Farhikhtegan: “Cracking down on what society does not view as an offense will backfire,” said Seyyed Hassan Khomeini in a meeting with members of the Ethics Committee of the Football Federation. 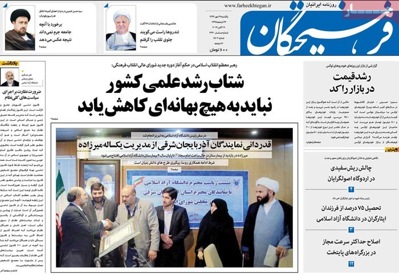 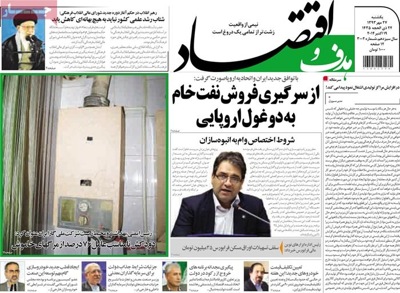 Haft-e Sobh: “We have found a lead on those who are behind acid attacks in Isfahan,” police reported. Police have so far confirmed four acid attacks allegedly by a motorcyclist. 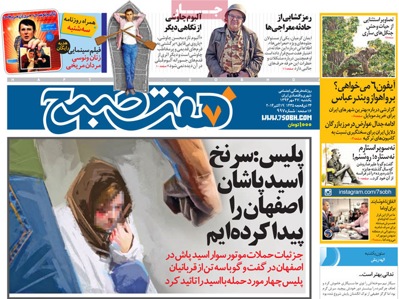 Iran: “In a controversial move, the government of Recep Tayyip Erdogan threw out the biggest corruption case involving 53 suspects among whom were the sons of the former interior and economy ministers. Reza Zarrab, a businessman of Iranian origin who also holds Azeri and Turkish citizenship and was a partner of Iranian tycoon Babak Zanjani, was also acquitted.” 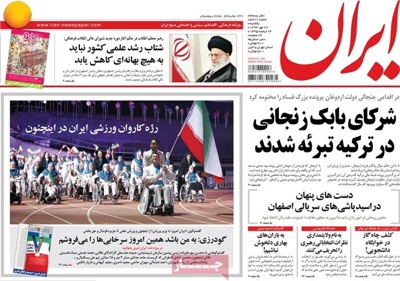 Kaenat: “Iran is set to meet the needs of the Lebanese army,” said Defense Minister Brigadier General Hossein Dehghan in a meeting with his Lebanese counterpart. 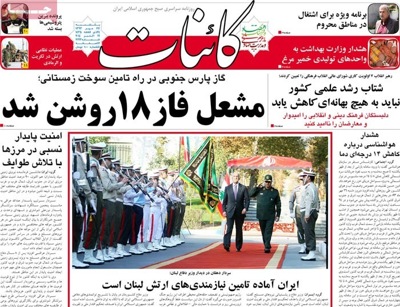 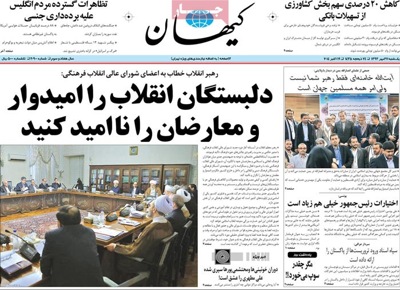 Mardomsalari: “General outlines of how the Central Bank of Iran should be run were approved at a State Expediency Council session attended by the heads of three branches of government.” Nasl-e Farda: “Iraqi Prime Minister Haider al-Abadi is to pay a two-day visit to Tehran; he is expected to arrive in Iran on Monday, October 20.” 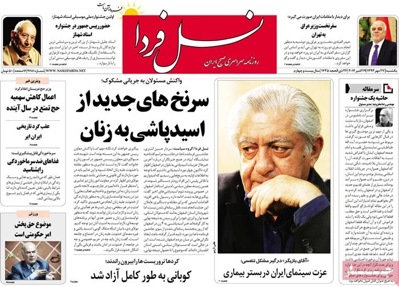 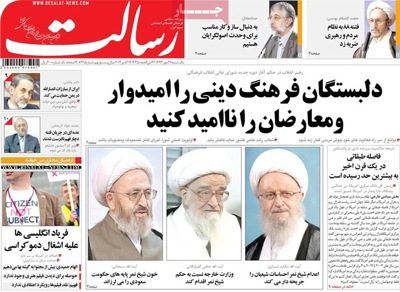 Roozan: “Acid attacks are an example of violence against women,” said the vice president. 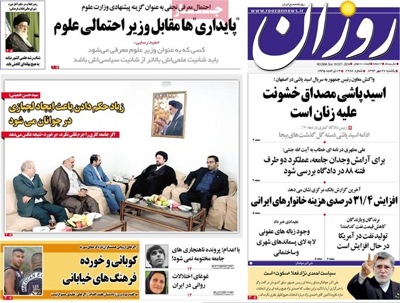 Sharq: “Documents about the visits of former President Ahmadinejad to New York and Moscow are to be sent to the Judiciary” is the headline of a contentious story which has been rumbling on since the former president was still in office. After Tasnim news agency filed a complaint with the parliament’s Article 90 Committee [which is tasked with implementing the constitutional article that allows anyone who is dissatisfied with the performance of the three branches of government to file a complaint with the parliamentary committee], the former president was asked to explain as to why he took his family members and those of his staff on a business trip. With the former president producing no answer about the costly travels, the committee has decided to send the documents to the Judiciary in order to have the case resolved.