A look at Iranian newspaper front pages on Oct. 18

IFP has taken a look at the front pages of Iranian dailies on Saturday and picked headlines from 21 of them.

Iranian dailies on Saturday gave extensive coverage to the comments of the Supreme Leader in a meeting with Ramadan Abdullah, the leader of the Palestinian Islamic Jihad. The other top story of the day was the end of an 8th round of nuclear talks between Iran and P5+1 and the comments of both sides afterward. On the international front, the dailies featured the latest news about the developments of Kobani, including the retreat of ISIL militants to the outskirts of the Syrian town on the border with Turkey.

Abrar: “Iran stands first in the world as far as the number of rhinoplasties is concerned,” said the Head of Iran’s Association of Surgeons Dr. Iraj Fazel. 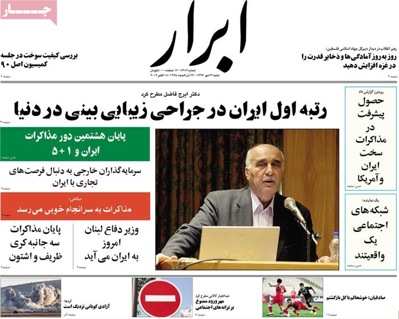 Abrar-e Eghtesadi: “The reduction of interest rate has been officially put on the agenda of Iran’s Money and Credit Council.” 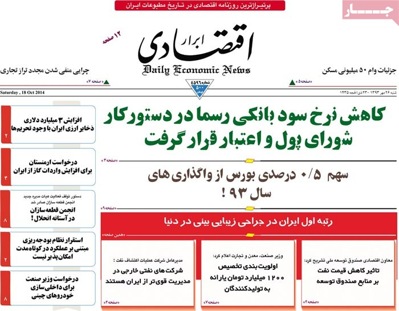 Afarinesh: “Islam does not allow us to pry into the personal lives of people; such privacy should not be undermined,” said Intelligence Minister Seyyed Mahmoud Alavi.

Afarinesh: “There has been some progress. However, there is a lot to be done yet,” said an American official after talks with Iranian and European envoys. Aftab-e Yazd: “My son and I do not see eye to eye on some matters,” said Ayatollah Ahmad Jannati [who is the secretary of the Guardian Council, when asked about the management of the Ministry of Culture and Islamic Guidance by Ali Jannati].

Aftab-e Yazd: “The 8th round of nuclear talks came to an end with both sides determined to finalize a deal within 40 days.” Arman-e Emrooz: “The two sides involved in nuclear talks [Iran and P5+1] view an extension of the negotiations as inappropriate [for the time being],” said Foreign Minister Mohammad Javad Zarif.

Arman-e Emrooz: “Khatami is the best candidate to represent the establishment in Europe,” said Deputy Leader of the Islamic Coalition Party Asadollah Badamchian in a surprise comment by a dyed-in-the-wool principlist. 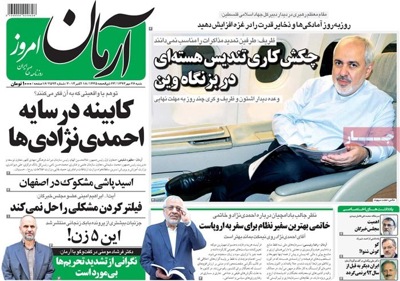 Asia: “CEOs of 200 world corporations sized up trade diplomacy with Iran” is the headline of a report the daily filed on its front page about the first Europe-Iran Forum in London. 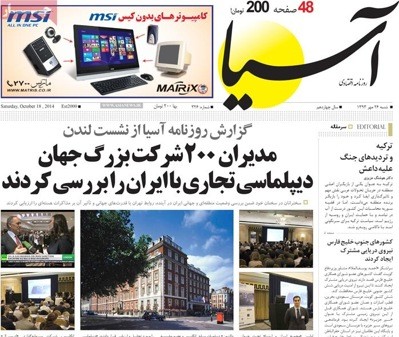 Asr-e Rasaneh: “Effective management of the economy has made sanctions ineffective,” said the economy minister. 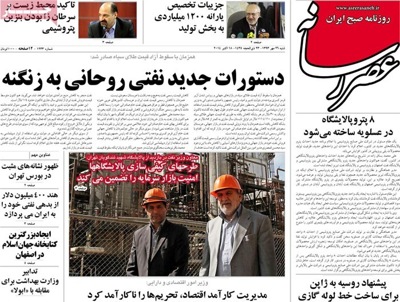 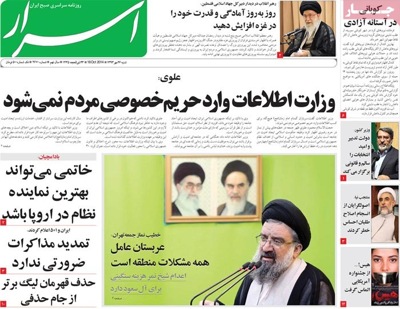 Emtiaz: “Ebola is highly unlikely to find its way to Iran,” said the director of the Center for Management of Contagious Disease.

Emtiaz: “All evidence presented by the Environment Protection Organization to parliament suggests that the gas produced in petrochemical plants was carcinogenic.”

Emtiaz: “The tune of Kitaro’s music has echoed in Tehran.” 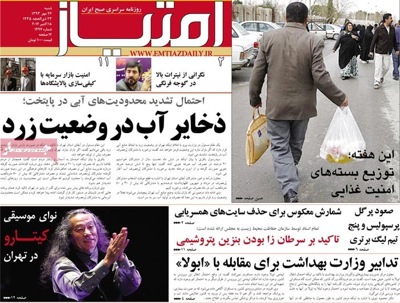 Ettela’at: “There are 250,000 vacant seats at universities, yet there are still some who seek to establish new universities,” said acting Minister of Science, Research and Technology Dr. Mohammad Ali Najafi in a thinly-veiled reference to efforts by former President Mahmoud Ahmadinejad and his close allies to found a new university.

Ettela’at: “Victory of Gaza is the fulfillment of the divine pledge, heralding greater triumphs down the road,” the Supreme Leader said in his meeting with Ramadan Abdullah, the leader of the Palestinian Islamic Jihad. 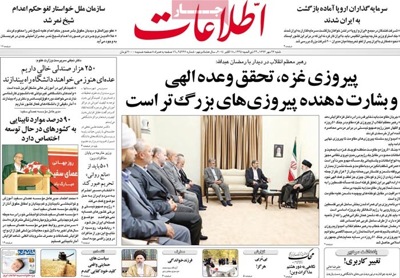 Hadaf va Eghtesad: “A budgetary red flag has been raised for the government after oil prices have gone into free fall.” 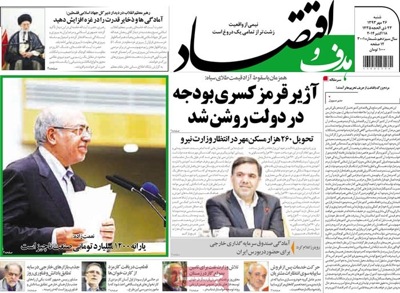 Hemayat: “If it wasn’t for the kindness of the establishment, the leaders of the sedition [a reference to Mir-Hossein Mousavi and Mehdi Karroubi who challenged the results of the 2009 presidential elections] would have been sentenced to death,” said Ayatollah Ahmad Jannati. 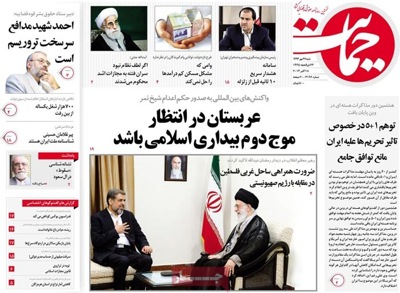 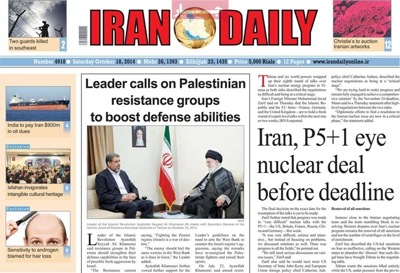 Jomhouri Islami: “President Rouhani has ordered his oil minister to warn OPEC members that sell crude at a lower-than-agreed price.”

Jomhouri Islami: “ISIL fighters were pushed back into the suburbs of Kobani; ‘The liberation of Kobani is immediate,’ Kurds predicted.” 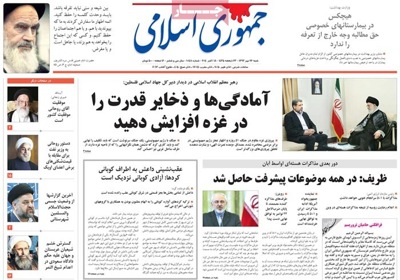 Kaenat: “Another clash between bandits and Iranian border guards; terrorists escaped to Pakistan again, two border guards were martyred and as many villains were killed.” 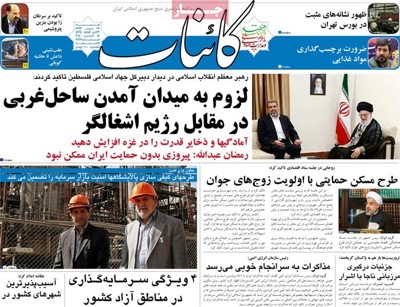 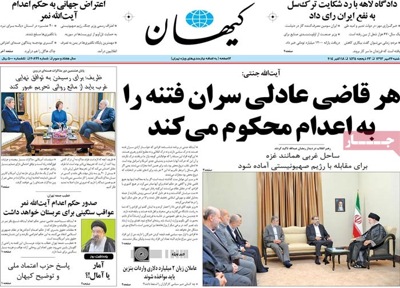 Khorasan: “Iran has become self-sufficient in manufacturing centrifuges used in the production of vaccines,” said Ali Akbar Salehi, the head of the Atomic Energy Organization of Iran. 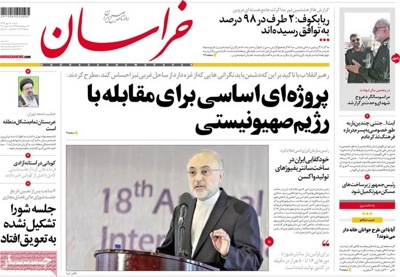 Mardomsalari: “Reformists are utterly determined to secure a majority of seats in the 10th parliament,” emphasized the secretary general of Democracy Party in a news conference in Isfahan. 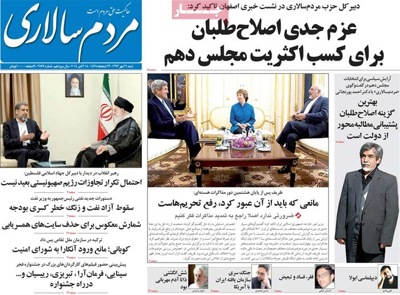 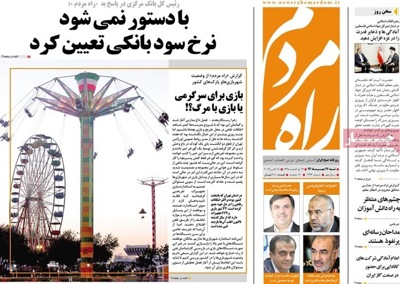 Roozan: “Iran-Turkey borders have been closed; hundreds of trucks have been left stranded.” The problem emerged after both countries raised border tariffs. As a result, 1,700 Iranian and 2,500 Turkish trucks have been stuck at the border.