A look at Iranian newspaper front pages on Oct. 15

The comments of Intelligence Minister Seyyed Mahmoud Alavi about a wide range of issues such as the ministry’s priorities and the close eye it keeps on IS-affiliated elements dominated the front pages of Iranian dailies on Wednesday. Another story that drew a lot of attention in the newspapers was the resumption of talks between Iran’s Mohammad Javad Zarif and EU’s Catherine Ashton in Vienna. Comments by President Rouhani in a televised interview late Monday also continued to capture front-page headlines.

Abrar-e Eghtesadi: “Iran’s exports to Iraq in the first half of the year [started March 21, 2014] have registered a 26 percent drop.” 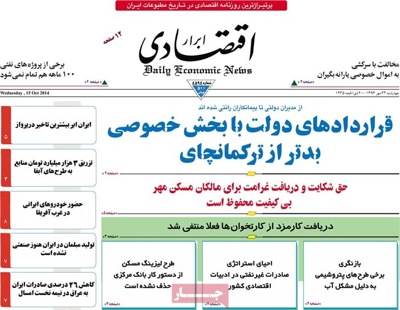 Afkar: “The [parliamentary] motion on promotion of virtue and prevention of vice runs counter to the provisions of the Constitution, Vice-President for Parliamentary Affairs Majid Ansari said. 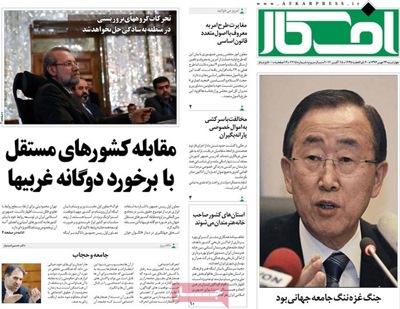 Arman-e Emrooz: “The so-called Worriers [Ahmadinejad supporters who keep expressing alarm about the state of affairs in the country since the rise to power of the moderate government of Hassan Rouhani] are worried about their own political future,” Ghodratollah Alikhani, a former reformist MP, said.

Arman-e Emrooz: “We managed to send a live animal to space, but we have been unable to fix [the problems of Kia] Pride,” Mohammad Reza Bahonar, a member of the parliament’s presiding board said, as he took a swipe at failure of different governments to streamline the country’s economy. 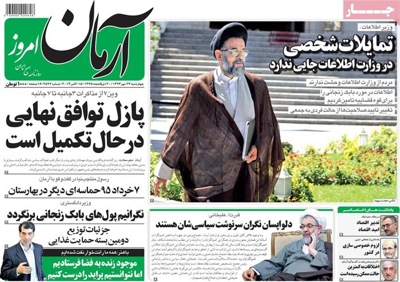 Asia: Former US Secretary of State Henry Kissinger has described Iran as “a natural ally” of the United States. 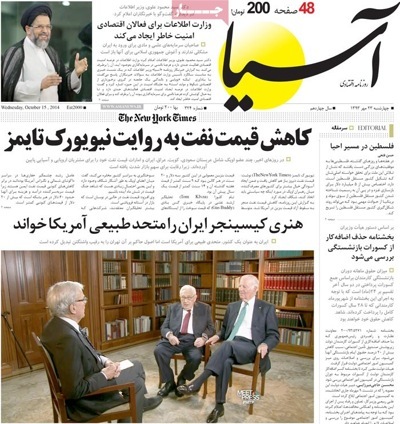 Ebtekar: “There is agreement on the general outline of the case,” Iranian Foreign Minister Mohammad Javad Zarif said of talks between Iran and P5+1 over Tehran’s nuclear program. 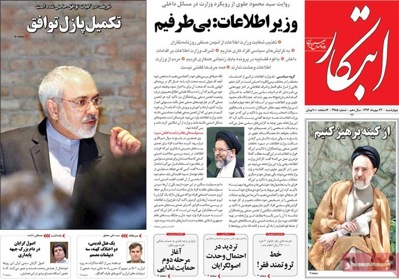 Eghtesad-e Pooya: “Caspian pollution is to blame for a five ton drop in sturgeon catch.” 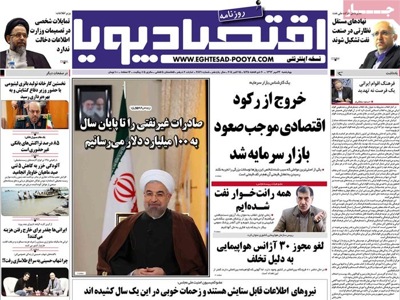 Emtiaz: “Up to 65 percent of Tehran residents are overweight; the age of diabetes has declined.” 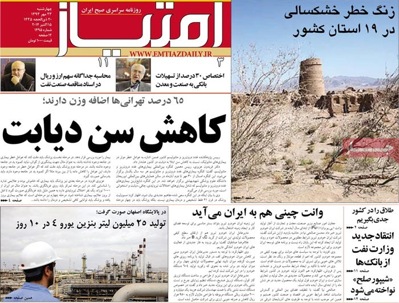 Etemad: “[The Intelligence Ministry] should not distinguish between principlists and reformists,” the intelligence minister said. 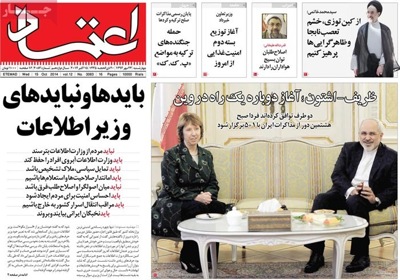 Ettela’at: “The world has accepted to live with an Iran which is in possession of peaceful nuclear technology,” President Hassan Rouhani said in a televised interview. 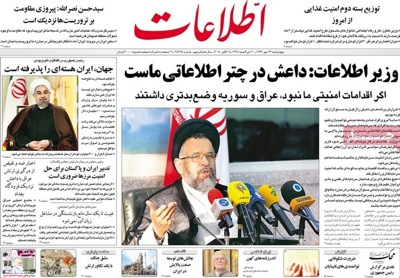 Hamshahri: “After Saudi Arabia decided to act contrary to its OPEC commitments and sell crude at a cheaper price, the drop in oil prices began to worry countries which depend on the black gold for the bulk of their revenues.” 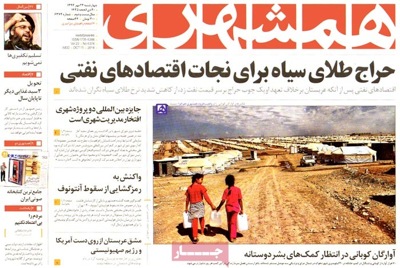 Jamejam: The president of the Islamic Republic of Iran Broadcasting, who is in Baku, Azerbaijan, has said IRIB will soon launch a new TV service in Azeri language. 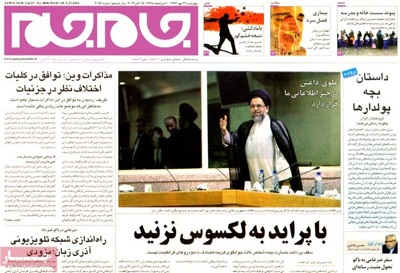 Javan: “Riyadh has turned down Iran’s policy of détente.” Allaeddin Borujerdi, a senior MP has blamed “old age” for the recent comments by the Saudi top diplomat describing Iran as an “occupying” force in Syria. 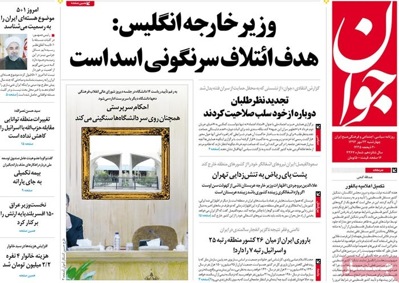 Kayhan: “A funeral procession has been held for seven police personnel who were martyred when their plane went down in the southeast late Saturday.”

Kayhan: “A number of MPs have sent a letter to the judge hearing the case involving Mehdi Hashemi [Ayatollah Hashemi Rafsanjani’s son], to call for the proceedings to be open to the public.” 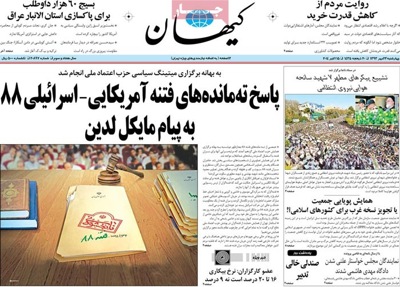 Mardomsalari: “Our plan is to secure $60 billion in revenues from exports [in the 12 months to March 21, 2015],” the deputy director of the Trade Promotion Organization of Iran said. 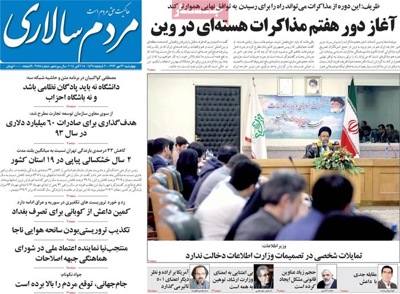 Payam-e Zaman: Police have denied rumors of foul play in a plane crash that killed seven of its personnel in the southeast Saturday night.

Payam-e Zaman: “We have identified individuals who are linked to IS inside Iran,” the intelligence minister said. 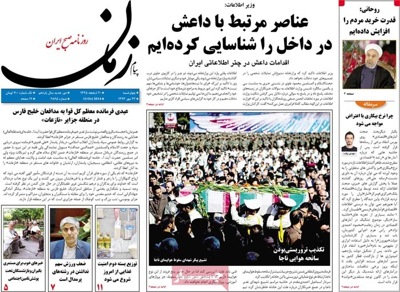 Roozan: “My attorney has appealed the verdict,” former Vice-President Mohammad Reza Rahimi said after a court found him guilty of corruption. 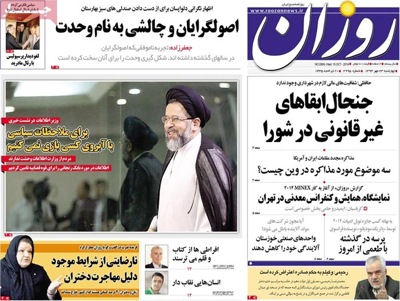 Sharq: The Iranian foreign minister has said the volume of enrichment, the manner of lifting the sanctions and its timing are the fundamental differences that need to be resolved. 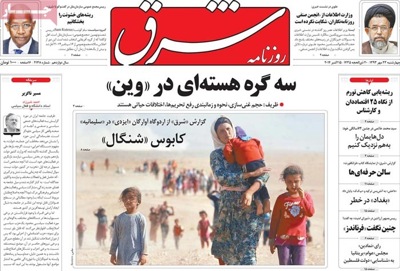 Sobh-e Eghtesad: “The current round of talks [between Iran and P5+1] is unlikely to result in a final deal,” the Iranian foreign minister said. 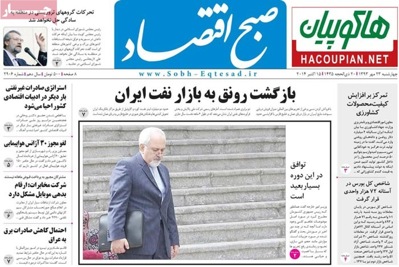 Tafahom: The Iranian deputy minister of culture and Islamic guidance has underscored closer media cooperation between Iran and China. 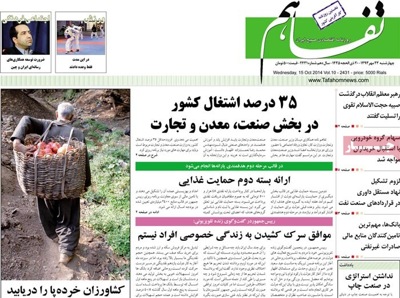