A look at Iranian newspaper front pages on Oct. 11

IFP has taken a look at the front pages of Iranian dailies on Saturday and picked headlines from 19 of them.

The front pages of Iranian dailies were dominated by a number of stories such as the first hiking of the Supreme Leader in the heights of Tehran since his prostate surgery last month. On the international front, the winning of the 2014 Nobel Peace Prize by Kailash Satyarthi, an Indian children’s rights activist, and Malala Yousafzai, a Pakistani female education activist, grabbed a lot of attention. Also drawing attention was news about relentless ISIL attacks on the predominantly Kurdish town of Kobani in Syria. A decline in Iran’s unemployment rate also appeared on the front pages of several dailies.

Abrar: “There is still enough time for the international mediators and Iran to reach an agreement on the Iranian nuclear program within the previously set time limits,” said the spokeswoman of the US State Department.

Abrar: “Talks between Iran and the International Atomic Energy Agency have been so constructive,” said Iran’s representative to the IAEA. 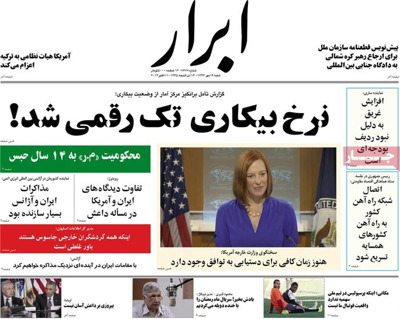 Abrar-e Eghtesadi: “Iran’s trade balance with four of its top seven trading partners is negative; the nightmare of the return of a negative balance to foreign trade.” 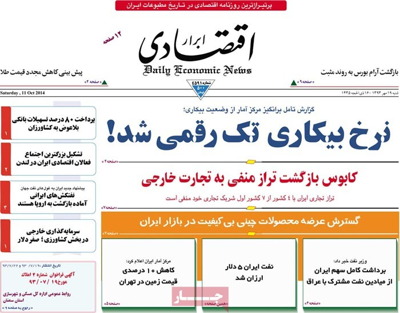 Afarinesh: “Services of top medical researchers have been praised at a 5th gathering of the International Academic Foundation of Professor Alireza Yalda.”

Afarinesh: “The [prolonged] absence of the North Korean leader has sent rumors flying about his condition.” 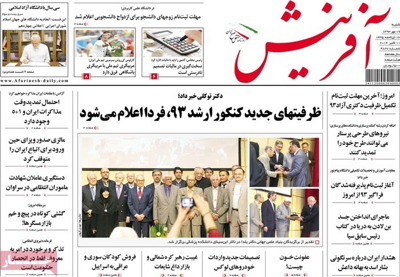 Afkar: “Iran’s oil tankers are poised to set out for Europe,” said the CEO of the National Iranian Tanker Co. 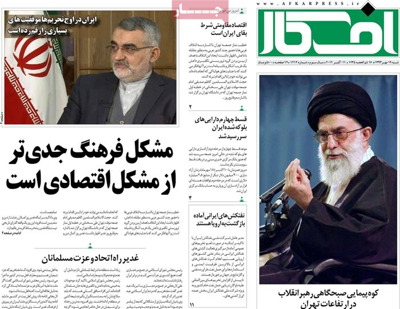 Aftab-e Yazd: “There is no need for clamor in criticizing us, our ears are wide open,” said the health minister. 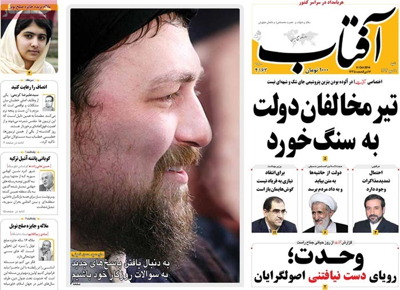 Arman-e Emrooz: “In a society where discrimination exists, calm will be non-existent,” said Seyyed Hassan Khomeini.

Arman-e Emrooz: “The case of Mohammad Reza Rahimi [former vice president under Ahmadinejad] is being heard by the Supreme Court. Reports that the former veep has received a 14-year jail term are not true.” 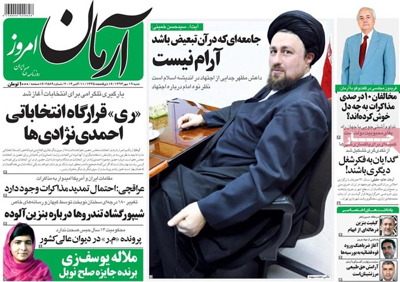 Ebtekar: “The country has a long way ahead to arrive at a satisfactory level of political security,” said Seyyed Hassan Khomeini, the grandson of the founder of the Islamic Republic.

Ebtekar: The Police Chief said he supports those who promote virtue in society, however, he added, “The responsibility to confront those who violate the Islamic morality code lies with the government.” 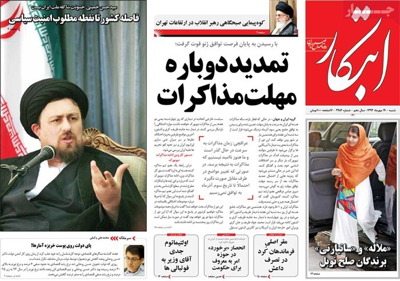 Emtiaz: “Services of Iranian composer [Loris Checknavarian] who spared no effort to promote Ferdowsi [a highly-revered Persian poet] have been praised.” 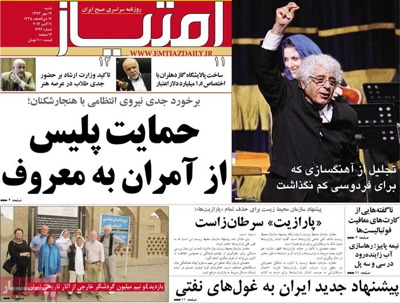 Ettela’at: “A society in which human dignity is dented is not Islamic,” said Seyyed Hassan Khomeini. 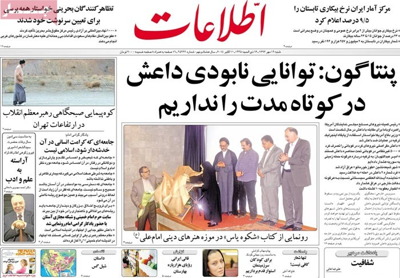 Hadaf va Eghtesad: “Cars with engine displacement of 2,500 cc and above have not been cleared from the Customs,” said the president of Iran’s Customs Administration. 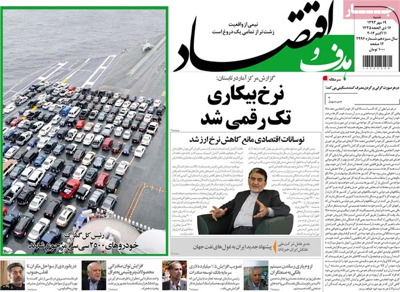 Hambastegi: “Unemployment has slipped below 10 percent,” reported the Statistical Center of Iran. 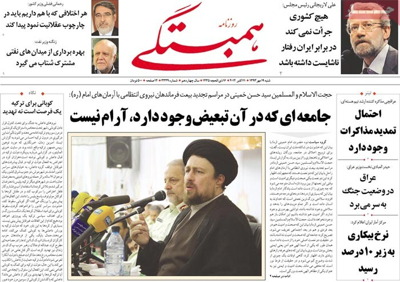 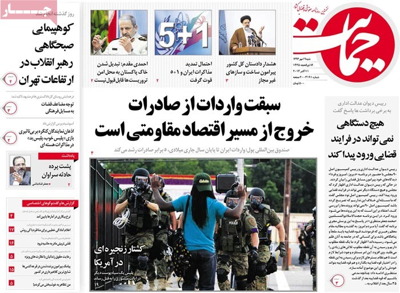 Jamejam: “Children’s dental care is to be given insurance coverage as of October 11; Iran’s Health Insurance Organization pays 70 percent of prevention costs.” 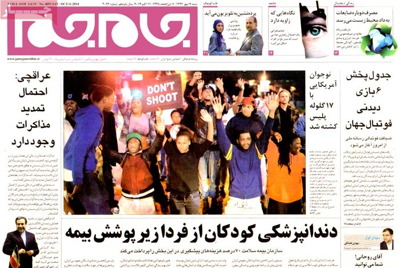 Jomhouri Islami: “Wheat production in Iran has risen by 10 percent.” 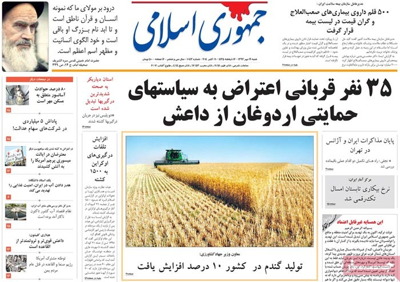 Kaenat: “People of Sanandaj [a city in Kurdistan Province] threw their weight behind fellow Kurds in Kobani, Syria.” 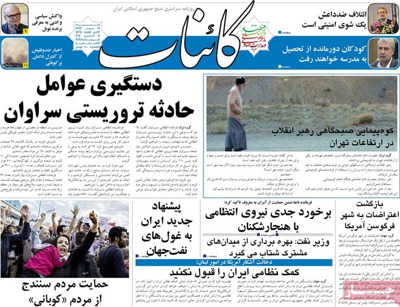 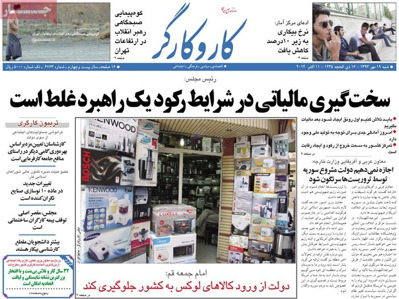 Nasl-e Farda: “The abduction of Iranian women by ISIL is a lie,” said a senior official with the Intelligence Ministry. 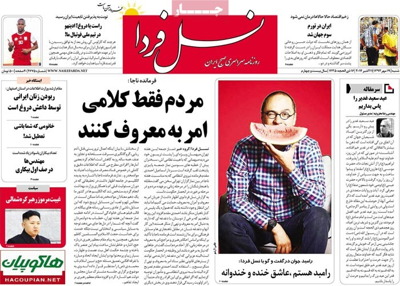 Shahrvand: “The Red Crescent Society of the Islamic Republic of Iran is to educate people as part of its plans to promote efficiency in the event of natural disasters.” 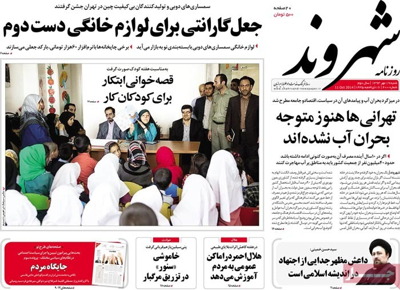 Sharq: “Another attack on a border base in southeastern city of Saravan killed four border guards and left another three wounded. During the assault, 14 terrorists were arrested.” 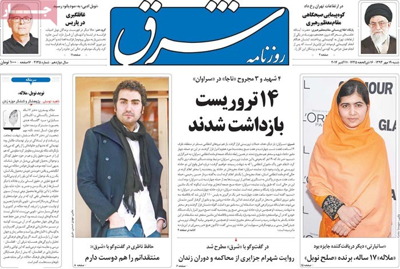