The international news story that made front-page headlines in Iranian dailies on Sunday was the ruling of an Egyptian court that dismissed all charges against the toppled Egyptian ruler Hosni Mubarak, his interior minister and sons Alaa and Gamal [charged with corruption] over the killing of protesters during the 2011 uprising.

Remarks of First Vice-President Eshagh Jahangiri at the induction ceremony of the new minister of science, research and technology came under the spotlight too. The refusal of Hossein Alizadeh, an Iranian musician and composer who is known as the master of tar, to receive France’s Chevalier of Legion of Honor also drew the attention of dailies, as did the presence of Foreign Minister Mohammad Javad Zarif in a closed-door parliament session to brief MPs on what went on in Vienna nuclear talks.

Abrar-e Eghtesadi: “The peace of foreign currency market has been shattered by [falling] oil prices. The Iranian currency is down 1,600 rials against the greenback.” 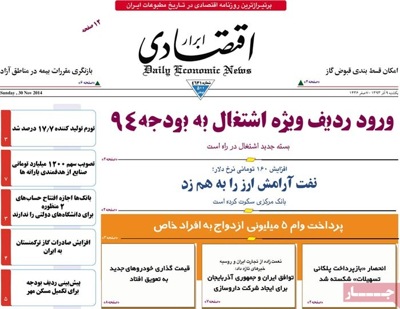 Afarinesh: “The negotiating team did not allow the topics of human rights and Iran’s missile program to be placed on the agenda of the negotiations,” Foreign Minister Mohammad Javad Zarif told parliament in a briefing on the Vienna nuclear talks. 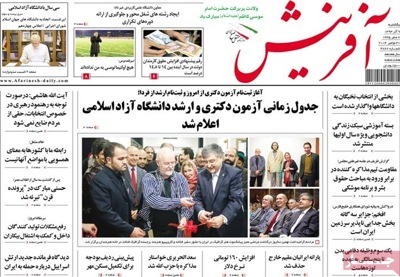 Aftab-e Yazd: “To pay its debts to Iran, India is to export steel to Iran! The decision comes as Iran tops the list of steel producers in the region.” 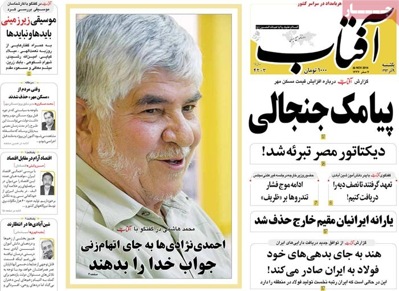 Arman-e Emrooz: “The defendant in the Trial of the Century has been acquitted” is the headline that the daily put on his front page about the verdict handed down in a case against ousted Egyptian President Hosni Mubarak [who was charged with murdering protestors in 2011] along with his sons and the former interior minister.

Arman-e Emrooz: “The number of women contracting AIDS has been on the rise; the disease has claimed 5,000 lives in Iran,” said the UN resident coordinator. 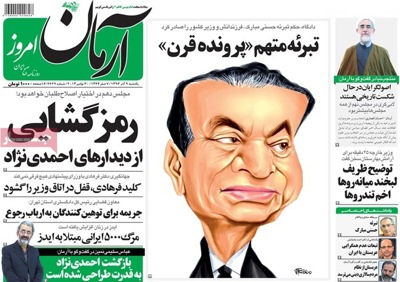 Asrar: “Hossein Alizadeh, an Iranian composer, researcher and tar and setar instrumentalist and improviser, has turned down France’s Chevalier of Legion of Honor.”

Asrar: “The current trend of elections needs to be reformed and reevaluated,” said Chairman of the State Expediency Council Akbar Hashemi Rafsanjani. 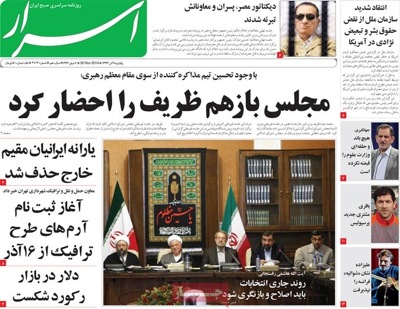 Ebtekar: “Mohammad Farhadi [the minister of science, research and technology who finally secured a vote of confidence from parliament on November 26] has got a lot in common with the previous picks of President Rouhani [who failed to get confirmed by the chamber],” said First Vice President Eshagh Jahangiri. 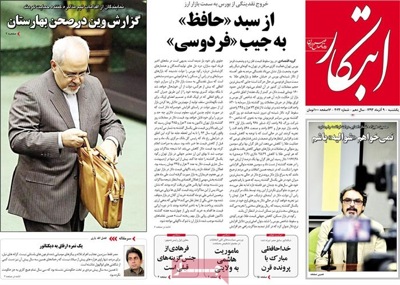 Ettela’at: “Interaction with universities and the elite is the policy of the government; no one group has monopoly over the Ministry of Science, Research and Technology,” said First Vice President Eshagh Jahangiri.

Ettela’at: “The outlines of general election policies have been approved in the State Expediency Council.” 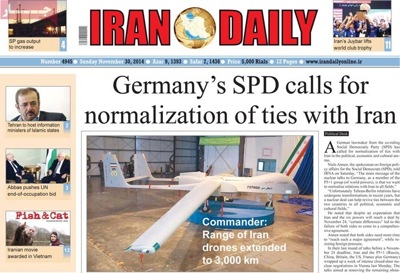 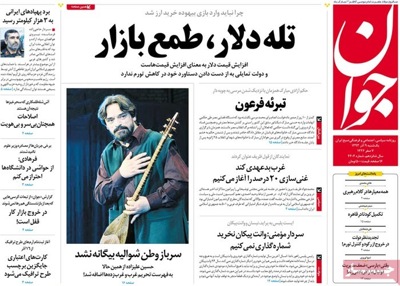 Jomhouri Islami: “The United Nations has harshly criticized the violation of human rights and racial discrimination in America.”

Jomhouri Islami: “Following the decision of parliament, immediate and unconditional medical services must be offered to those injured in car accidents.”

Jomhouri Islami: “An induction ceremony has been held for the new minister of science, research and technology.”

Jomhouri Islami: “Egyptians took to streets in protest against the verdict that cleared former Egyptian strongman Hosni Mubarak of all charges.” Kaenat: “Joint venture is the condition that Iran Khodro [the leading Iranian carmaker] has set for cooperation with foreign automakers.” 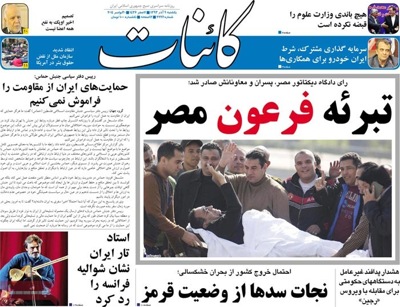 Kayhan: “Foreign Minister Mohammad Javad Zarif only touched upon general outlines in his briefing in parliament on nuclear talks,” said a number of MPs. 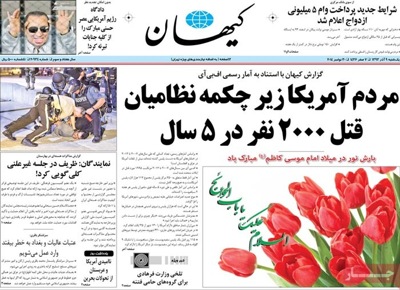 Mardomsalari: “We hope to clinch a nuclear deal ahead of the deadline,” said the first vice president. 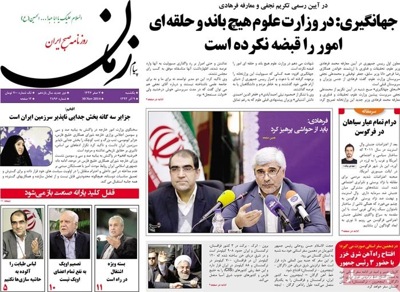 Tafahom: “Iran’s population is on the threshold of 78 million,” reported the Statistical Center of Iran.