A look at Iranian newspaper front pages on Nov. 25

After days of speculations about the outcome of nuclear talks between Iran and world powers, which finally came to an end on November 24, all Iranian dailies, without exception, gave extensive coverage to the Vienna negotiations. The two sides have agreed to extend the negotiations for another seven months; every month, $700 million in Iran’s frozen assets will be released, they reported.

Abrar: “Mohammad Farhadi [President Rouhani’s fifth choice for the Ministry of Science, Research and Technology] will run the ministry with new faces in managerial positions.” 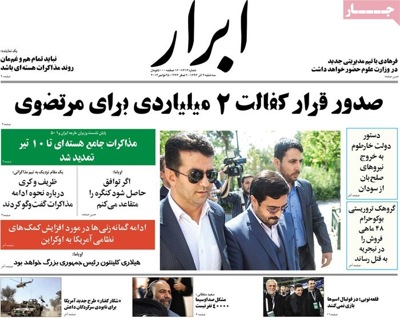 Afarinesh: “Disagreements have undermined Islamic countries,” said Chairman of the Expediency Council Akbar Hashemi Rafsanjani in a meeting with Chairman of the Supreme Judiciary Council (SJC) of Qatar. 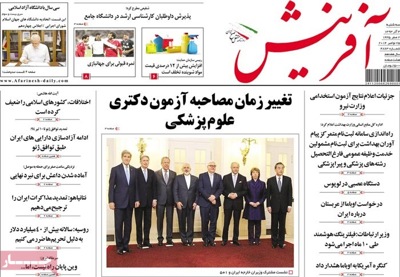 Afkar: “We still look at the process of nuclear talks positively,” said Vice-Speaker of the Iranian Parliament Mohammad Hassan Abutorabi. 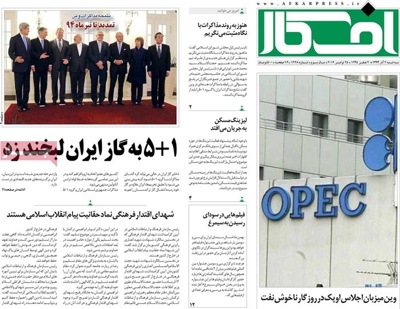 Arman-e Emrooz: “Seven-day negotiations have been extended for seven months.”

Arman-e Emrooz: “We are victors; the world has no choice but hold talks with Iran,” said President Rouhani. 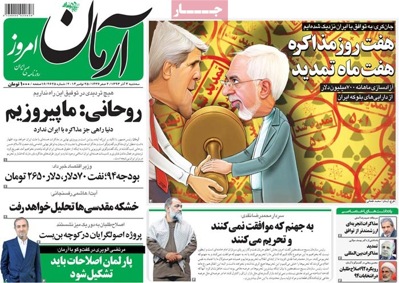 Asrar: “I am opposed to the hardline approach of the Islamic Revolution Stability Front [an ultra-principlist party],” said Ali Motahari, a principlist MP representing Tehran in parliament. 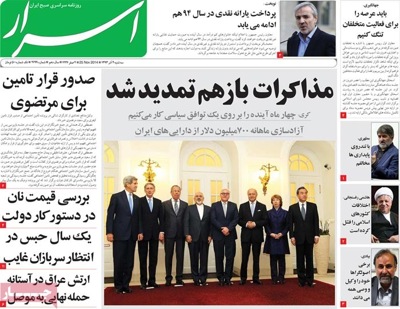 Ettela’at: “Winners of Jalal Al-e-Ahmad Literary Awards [given to the best Iranian authors each year] have been named.”

Ettela’at: “Some economic sanctions slapped against Iran have been lifted,” said the economy minister. 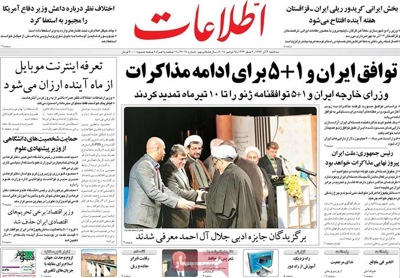 Hambastegi: “The performance of Iran’s negotiating team reflected the decisions of the establishment,” said the Iranian defense minister. 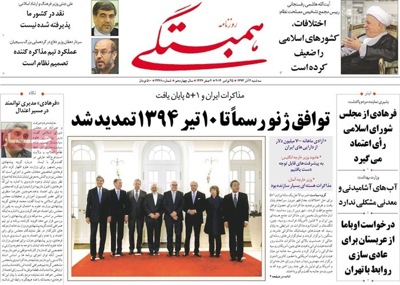 Hamshahri: “The Chinese are reigning on Iran’s car market.” 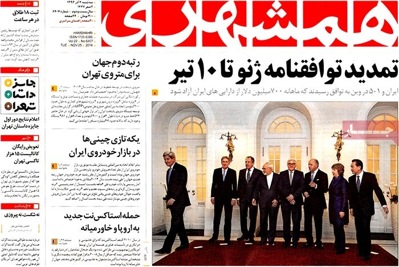 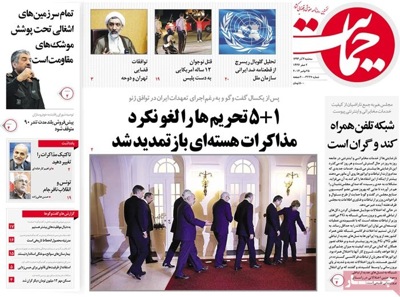 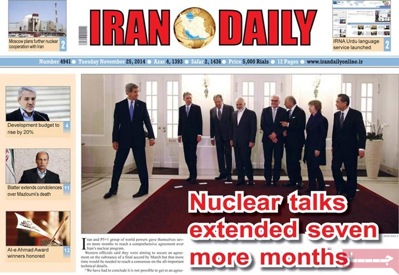 Jahan-e Sanat: “Release of $700 million in Iran’s frozen assets on a monthly basis has marked the finish line of Vienna marathon nuclear talks.” 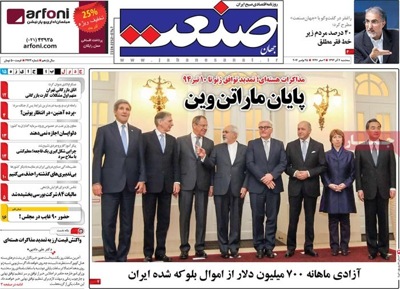 Javan: “On the closing day of a global conference in Qom, in central Iran, Muslim scholars, who gathered to discuss Takfiri and extremist groups, have laid emphasis on consensus among Sunnis and Shiites to confront extremist groups.”

Javan: “Seven-month artificial respiration is given to nuclear diplomacy.” 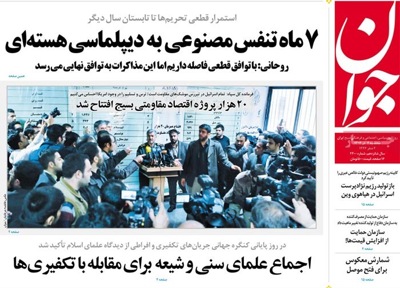 Kayhan: “We should not turn to foreigners in our quest for dignity and authority,” said Commander of the Islamic Revolution Guard Corps Major General Mohammad Ali Jafari.

Kayhan: “The village chief [a reference to America] proved untrustworthy; sanctions have been extended;” read the banner headline of the daily. 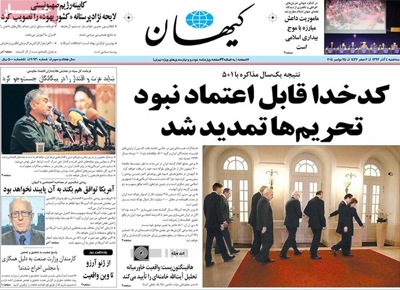 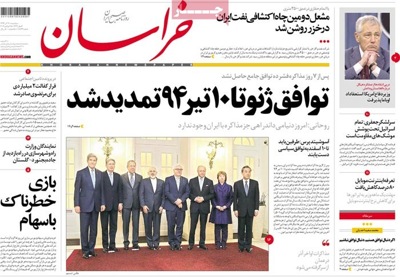 Mardomsalari: “The Islamic Republic of Iran is looking for peaceful relations in the future,” said Chairman of the Expediency Council Akbar Hashemi Rafsanjani. 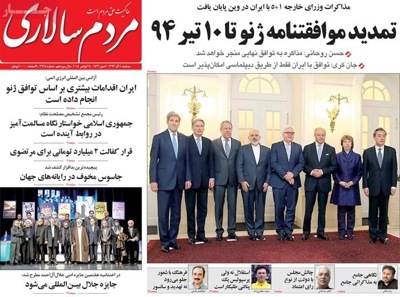 Rah-e Mardom: “Mohammad Farhadi [President Rouhani’s fifth pick to lead the Ministry of Science, Research and Technology] will get confirmation from parliament,” said a number of MPs. 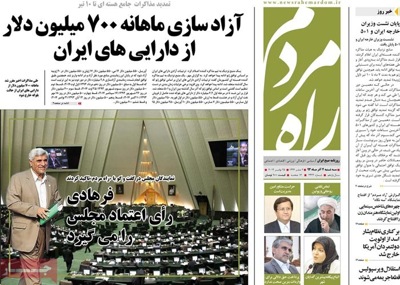 Resalat: “The International Atomic Energy Agency (IAEA) has realized that the information offered by the terrorist Mojahedin-e Khalq Organization was unreliable.” 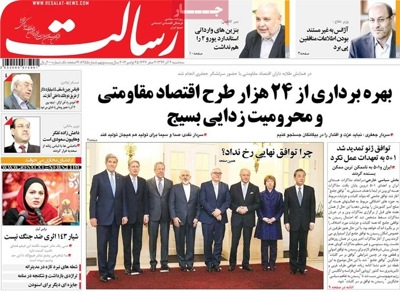 Roozan: “Disrupting the economic system of the country is the new charge facing Saeed Mortazavi, a former Tehran prosecutor.”

Roozan: “Commanders of the Islamic Revolution Guard Corps (IRGC) and Basij (volunteer force) have taken a harsh stance against America in a series of anti-US conferences.” 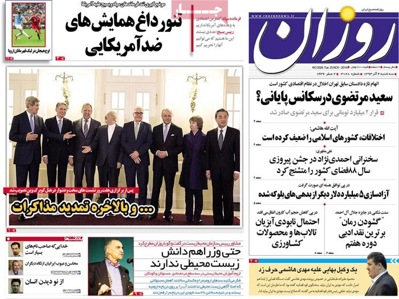 Sharq has described extension of nuclear talks as “renewal of hope”. 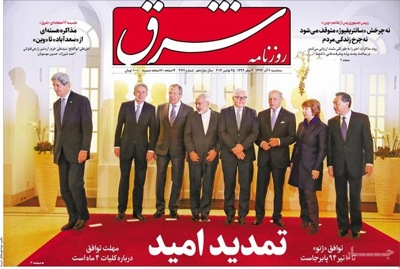 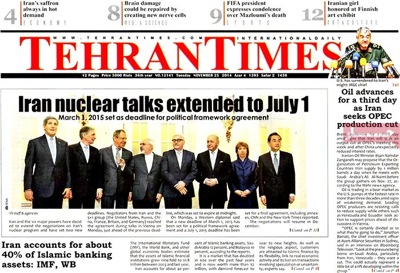 Vatan-e Emrooz: “US Secretary of Defense Chuck Hagel has been forced to resign.”

Vatan-e Emrooz: “The Geneva Interim Agreement has been extended for another seven months; one year into the Geneva deal, the achievement amounts to nothing.” 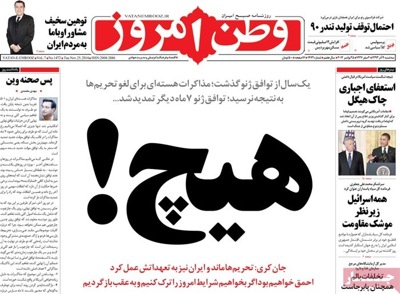