A look at Iranian newspaper front pages on Nov. 13

IFP has taken a look at the front pages of newspapers on Thursday and picked headlines from 28 of them. IFP has simply translated the headlines and does not vouch for their accuracy.

The countdown to a November 24 deadline for a nuclear deal between Iran and world powers and comments by Iranian officials, including the president, about the talks with P5+1 dominated the front pages of Iranian dailies on Thursday. Also in the news were remarks by the Iranian intelligence chief that a bombing plot in the holy city of Qom has been foiled. News about the release of Mohammad Mayeli Kohan, a former national soccer team coach, from prison grabbed headlines too.

Abrar: As many as 13.6 million people have been displaced by war in Iraq and Syria. 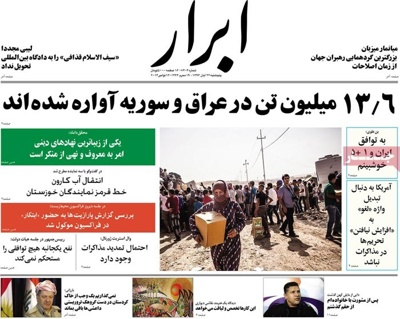 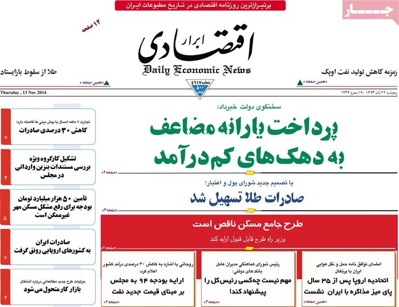 Afarinesh: President Rouhani has said the fatwa the Supreme Leader has issued [banning the development and use of nuclear weapons] is the strongest guarantee [that Iran does not seek to have nuclear arms]. 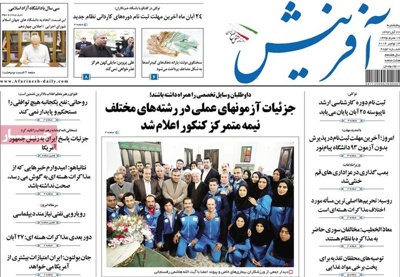 Afkar: “Iran won’t make commitments beyond what is stipulated in the Nuclear Non-Proliferation Treaty,” said the secretary of the Supreme National Security Council. 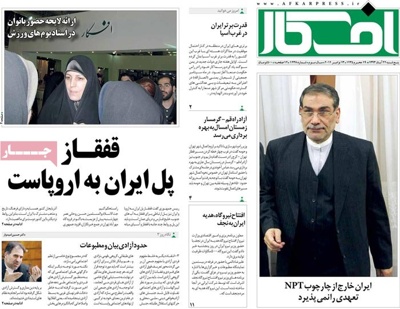 Arman-e Emrooz: The Iranian intelligence minister has said a plot to plant a bomb in the holy city of Qom has been foiled. 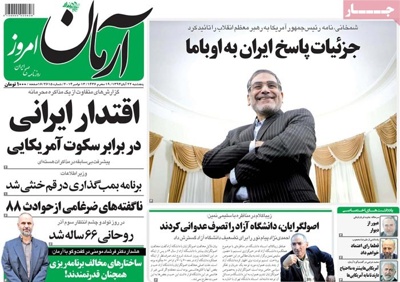 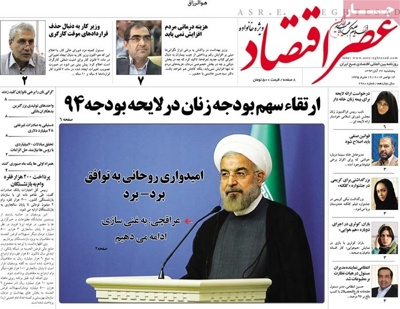 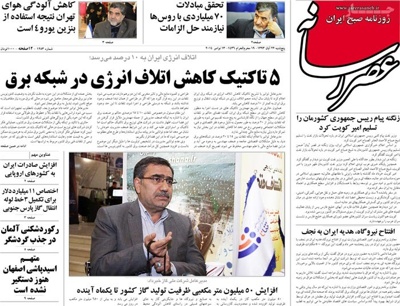 Asrar: The attorney general has expressed opposition to the growth of the Justice Ministry’s powers. 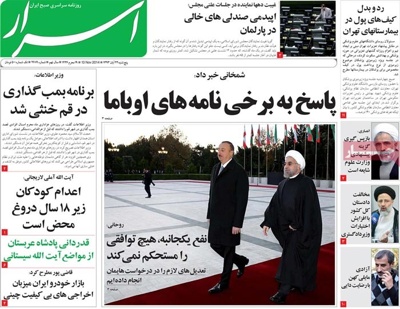 Ebtekar: Secretary of the Supreme National Security Council Ali Shamkhani has confirmed reports that President Obama has recently sent a letter to the Supreme Leader. “Such correspondence dates back a few years and in some cases the letters have been replied to.”

Ebtekar: Chairman of the Expediency Council Ayatollah Akbar Hashemi Rafsanjani has criticized the previous government for hiding behind justice to challenge the rights of the strata of society most in need. 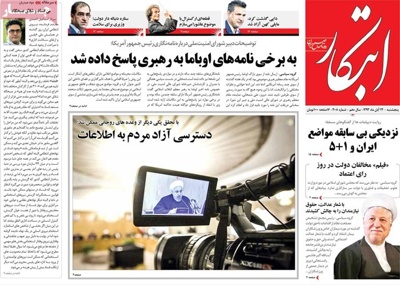 Emtiaz: Eighteen Iranian soccer players have been suspended thanks to their failure to serve military duty. 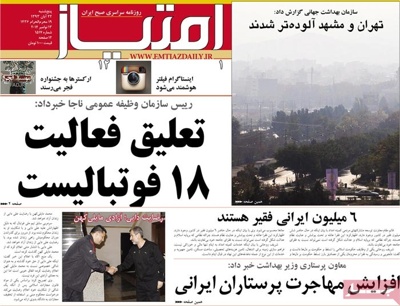 Esfahan Emrooz: “Air pollution in Isfahan is even worse than the capital,” said the director of the provincial Environment Protection Department. 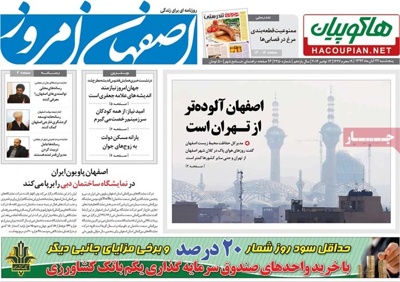 Etemad: President Rouhani has urged Iran’s nuclear negotiating partners not to take their internal problems to the negotiating table.

Etemad: Ali Daei has forgiven Mohammad Mayeli Kohan [a former coach of the national soccer team who began to serve a 4-month term in jail on Tuesday after being convicted following a lawsuit by Daei].  Mayeli Kohan has now walked free. 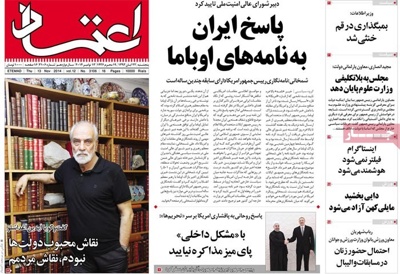 Ettela’at: The presidents of major universities have thrown their weight behind President Rouhani’s nominee for the post of science minister.

Ettela’at: “Free public access to information is the way to counter corruption,” President Rouhani said at a meeting of his Cabinet.

Ettela’at: A tenth round of nuclear talks between Iran and P5+1 will be held in Vienna on November 18. 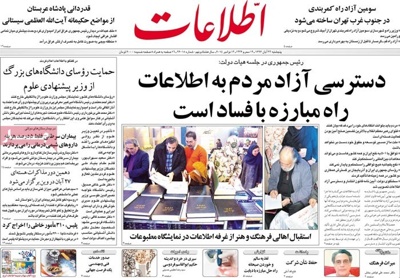 Hemayat: “The outcome of the nuclear talks should not deal a blow to the dignity of Iranian people and the self-confidence of their scientists,” said Judiciary Chief Ayatollah Sadegh Amoli Larijani. 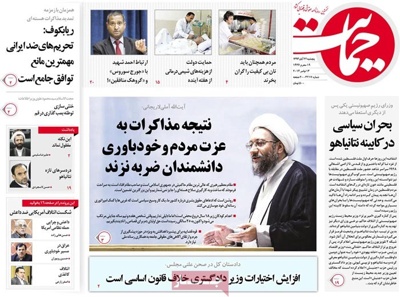 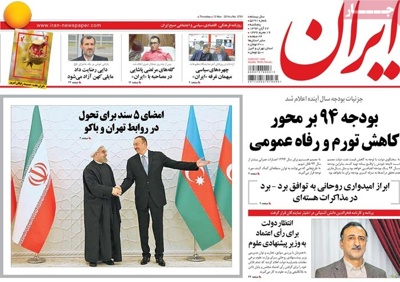 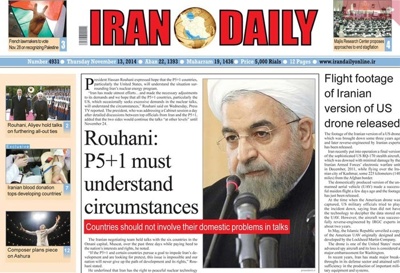 Jomhouri Islami: Hopes of clinching a comprehensive nuclear deal have been boosted. 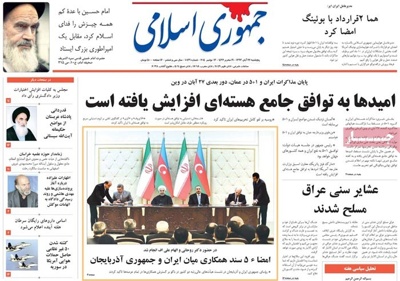 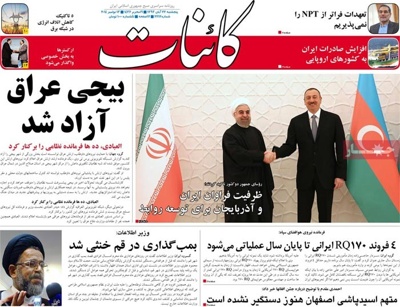 Kar va Kargar: The presidents of Iran and Azerbaijan have underlined efforts to boost bilateral ties. 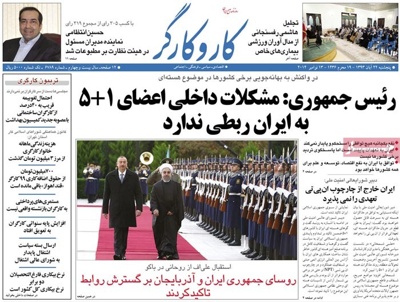 Kasbokar: “Iran is projected to have exported $48 billion in non-oil items by yearend [March 21, 2015],” said the secretary general of the Chamber of Commerce. 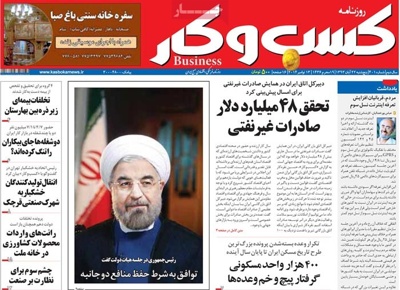 Kayhan: Iran is to inaugurate [on Thursday] a 500 MW power plant in Najaf as a gift to the residents of the Iraqi holy city. 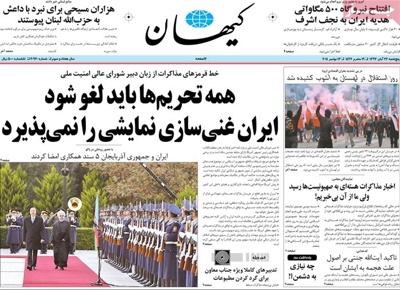 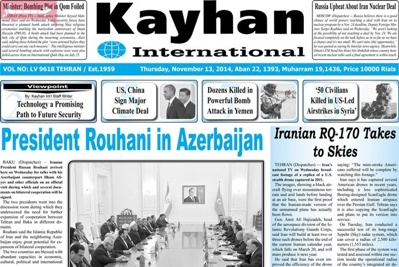 Khorasan: “As many as 310 police personnel who acted against protocol have been fired this year [began March 21, 2014],” Police Chief Brigadier General Esmail Ahmadi Moghaddam said. 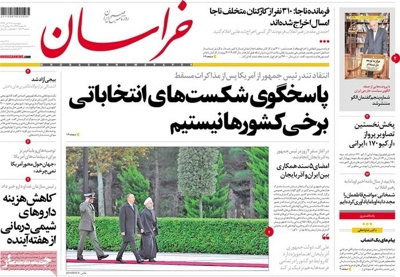 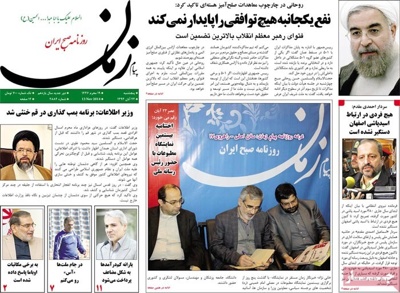 Roozan: “I am not supposed to take over as director of the [newly reinstated] Management and Planning Organization,” Mohammad Ali Najafi, who serves as acting science minister, said. 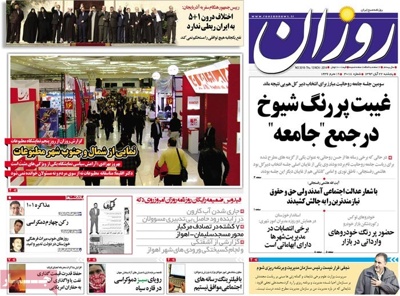 Shahrvand: “The ban on the presence of female spectators at volleyball arenas has been lifted,” said the deputy minister of youth affairs and sports. 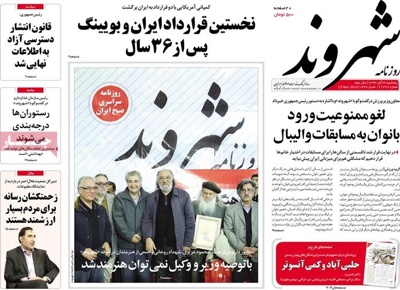 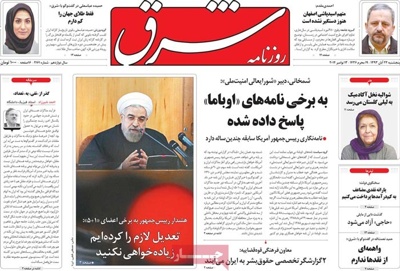 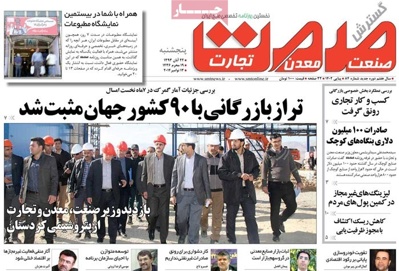