A look at Iranian newspaper front pages on Nov. 12

IFP has taken a look at the front pages of newspapers on Wednesday and picked headlines from 32 of them. IFP has simply translated the headlines and does not vouch for their accuracy.

Reelection of Hossein Entezami as the representative of the press managing editors at the Media Supervisory Board dominated the front pages of Iranian dailies on Wednesday. The imprisonment of Mohammad Mayeli Kohan, the former head coach of the Iranian national soccer team, the president’s nomination of Dr. Fakhreddin Ahmadi Danesh-Ashtiani as science minister and conclusion of nuclear talks between representatives of Iran, the EU and the US in Muscat, Oman also grabbed headlines.

Abrar: US Secretary of State John Kerry is likely to return to Muscat to take up the talks where they were left off. Afarinesh: Iran and Russia have signed a deal over construction by Russia of two new nuclear power plants in Iran. Aftab-e Yazd: A race against time is on to clinch a nuclear deal before a November 24th deadline. Arman-e Emrooz: Mohammad Mayeli Kohan, a former coach of the Iranian national soccer team, has been taken to Evin prison to serve a four-month term after he was found guilty following a suit filed by Ali Daei, another national team coach. Asia: Hossein Entezami has been reelected as the representative of the managing editors of the press at the Media Supervisory Board. In being elected to the board for a 6th time in a row, he garnered 305 votes of the total 319 cast.

Asia: In the talks in Muscat, the West promised to lift the sanctions it has imposed on Iran.

Asia: Yanni, a world-famous Greek pianist, keyboardist and composer, is to perform in Tehran and in the southern Iranian island of Kish soon. 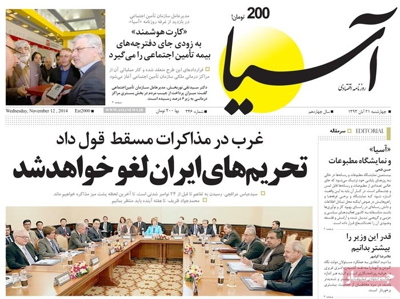 Bani Film:“The Islamic Revolution Guard Corps does not need its own independent TV channel,” says the head of the Public Relations Department of the force. Donyay-e Eghtesad: The Tehran Stock Exchange index is on a 10-day rising streak. Ebtekar: The president’s fourth nominee to take over the Ministry of Science, Research and Technology has come under a torrent of attacks from some MPs.

Ebtekar: “You have to wait for a week,” Foreign Minister Mohammad Javad Zarif said in response to questions about his assessment of Muscat nuclear talks. Emtiaz: Mohammad Sarafraz has been inducted as president of Islamic Republic of Iran Broadcasting (IRIB). Esfahan Emrooz: Isfahan and Poland are close to launching a new round of bilateral relations. Etemad: A spokesman for the Ministry of Culture and Islamic Guidance has said that the content of The Colonel by Mahmoud Dowlatabadi needs to be revised before it is given the go-ahead to go to press. Ettela’at: The government spokesman says 246 development projects will have been inaugurated by the end of the year [March 21, 2015].

Ettela’at: To counter water scarcity, modern irrigation techniques will be used on some 4 million hectares of agricultural land across Iran. Hambastegi: Tehran prosecutors have released the names of six individuals convicted of corruption.

Hambastegi: Tehran is to host a meeting of the information ministers of the Organization of Islamic Cooperation. Hemayat: The Palestinian uprising in the occupied territories is growing daily. Iran: The number of people visiting the 20th Exhibition of the Press and News Agencies is huge. Javan: The Islamic Consultative Assembly has not welcomed the nomination of Dr. Fakhreddin Ahmadi Danesh-Ashtiani by the president for the portfolio of science minister. Jomhouri Islami: “Opening letters of credit for imports of airplane spare parts has become possible,” said the minister of roads and urban development. Kaenat: Average inflation is not at a level to warrant a review of banking interest rates. Kayhan:The remains of 75 Iranian soldiers who fell martyr during the Sacred Defense [the Iran-Iraq war in the 80s] have returned home.

Kayhan: Despite statements by the Iranian nuclear negotiating team that only those who were involved in the Muscat talks were privy to what happened, US Secretary of State John Kerry has offered a report to Netanyahu.

Kayhan: President Rouhani’s proposed minister of science has compared Basij [volunteers] to soldiers of the Shah!!!

Kayhan: MPs have voiced opposition to the president’s choice for the minister of science. Khorasan: “Mahmoud Reza Khavari, [who is wanted by authorities in Iran for corruption], is practically in prison in Canada,” the head of the Interpol Division of the Iranian police force said.

Mardomsalari: “Individuals have no right to resort to physical action in the name of preventing vice,” said the head of the Administrative Justice Court. Qods: Government is to offer housing subsidies to young couples. Rah-e Mardom: “That the quality of Tehran’s air has improved is not simply a claim,” said the director of the Environment Protection Organization. Shahrara: Iraqi Vice-President Nouri al-Maliki, who is in the holy city of Mashhad, said, “We will drive IS out of Iraq.”

Shahrvand: “We are not supposed to make up in one single year for the lack of development over a long period of time,” the health minister said. Sharq: The head of the Iranian Volleyball Federation has said he has talked to the officials of the ministries of Youth and Sports and the Interior about the presence of female spectators in sport arenas. SMT: At a meeting of Aman Union, Iranian Minister of Industries, Mining and Trade Mohammad Reza Nematzadeh has put forth the idea of forming an Islamic Common Market.

Tafahom: Inflation has declined by as much as 17 percent in a single year.

Tafahom: The head of the Statistical Center of Iran has said an electronic census will be carried out.