A look at Iranian newspaper front pages on Nov. 1

The countdown for a nuclear deal between Iran and P5+1; the aftershocks of parliament’s failure to endorse President Rouhani’s pick to head the Ministry of Science, Research and Technology; and unrest in Palestinian territories following Israel’s closure of the Al-Aqsa Mosque dominated the front pages of Iranian newspapers on Saturday.

Abrar: “There is no formula to extend the nuclear talks,” said a member of parliament’s National Security and Foreign Policy Committee.

Abrar says the president has sent to parliament a bill that, among others things, lays out plans to create a free trade zone in Jask in southern Iran.

Abrar: “Iran does have good potential for exports of medicinal drugs to Austria,” said the Austrian ambassador to Tehran. 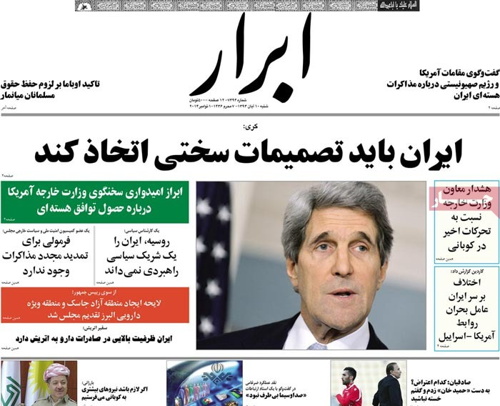 Abrar-e Eghtesadi: Iran has launched exports of petrochemicals to Italy. 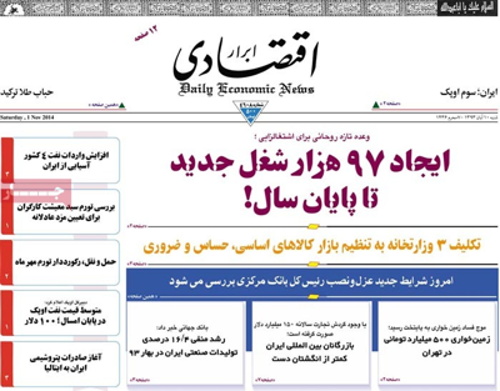 Afarinesh: Isfahan has played host to a festival of remote-controlled small-scale unmanned aircraft.

Afarinesh: President Obama’s National Security Advisor Susan Rice has said that a preliminary deal has been cut with Iran. 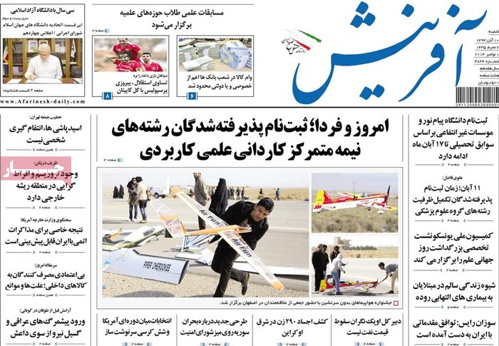 Afkar: Water is to be rechanneled to the Zayandehrood River in central Iran shortly.

Afkar: “Removal of sanctions is a prerequisite for conclusion of a nuclear deal,” said the chairman of parliament’s National Security and Foreign Policy Committee. 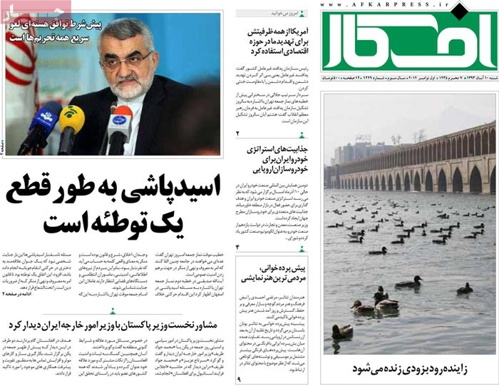 Aftab-e Yazd: “One should not expect anything more than this from this parliament,” Mostafa Moin, a former science minister [under President Khatami] said in a jab at parliament for its refusal to endorse President Rouhani’s pick for the top science post. 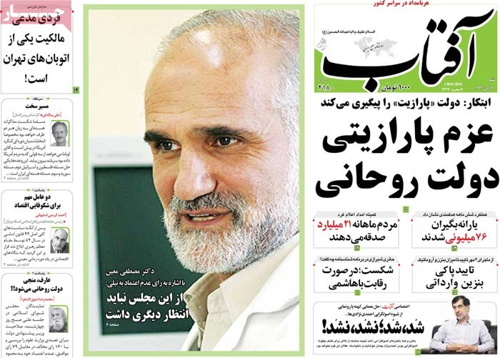 Arman-e Emrooz: Mohammad Jahromi, [a former managing director of Saderat Bank and a labor minister under former President Mahmoud Ahmadinejad who is alleged to have played a role in a massive corruption case] says he is ready to stand trial, even if the hearings are public. 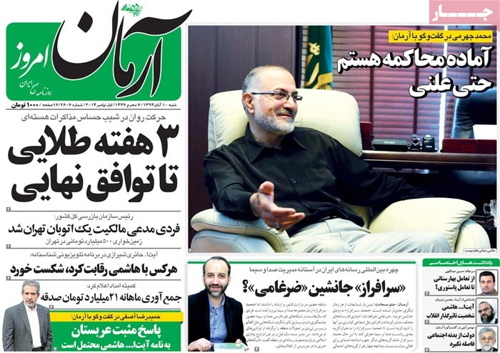 Asia: “Bitcoins are to be launched in Iran,” said the deputy director of the Cyberspace Research Institute. 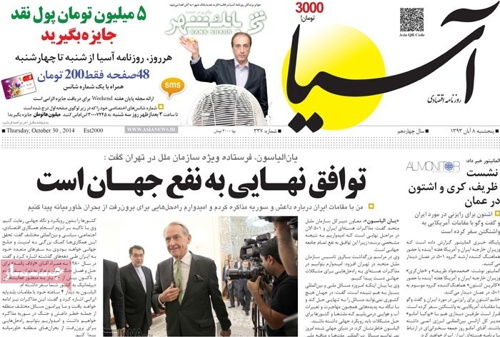 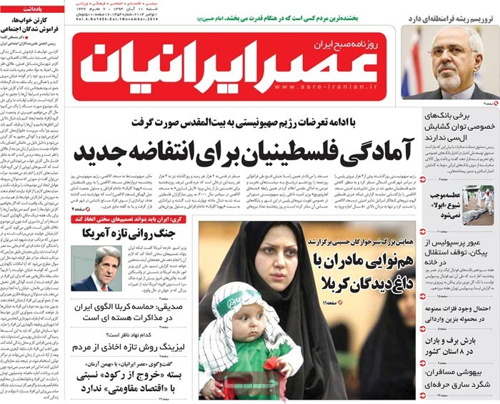 Asr-e Rasaneh: “As many as 80 trains packed with European tourists are expected in Iran.” 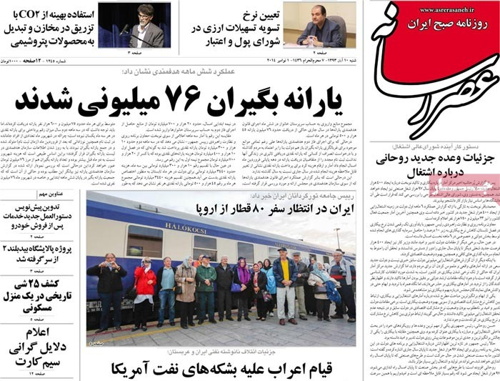 Ebtekar: “I have no idea why they [a reference to MPs] want to impeach me,” said Ali Jannati, the minister of culture and Islamic guidance.

Ebtekar: “Anyone who took on Ayatollah Rafsanjani in a race was defeated,” said Ayatollah Hayeri Shirazi, a member of the Assembly of Experts [in reference to an upcoming meeting of the assembly to replace Ayatollah Mahdavi Kani who passed away in October]. 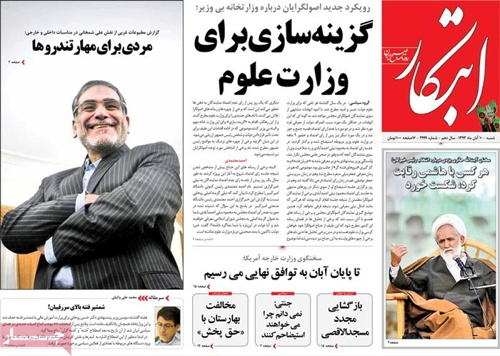 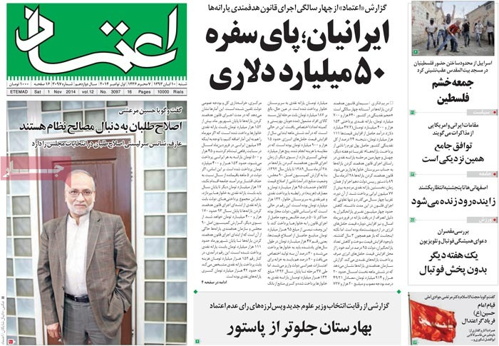 Ettela’at: American bishops have called on the White House to base its stance in nuclear talks with Iran on the fatwa [the Supreme Leader has issued] banning the development and use of nuclear arms.

Ettela’at: More than half a century of research by Dr. Yahya Dowlati [a renowned Iranian dermatologist] has been praised. 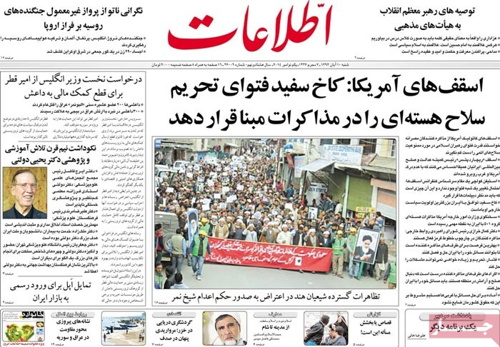 Iran: “The Iranian nuclear negotiators have not crossed the establishment’s red lines,” said Ali Akbar Velayati, an advisor to the Supreme Leader. 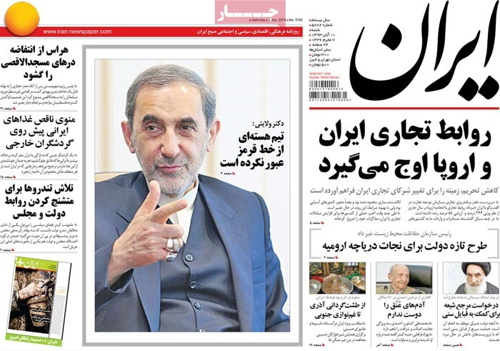 Javan: “The number of those who receive cash subsidies stands at 76 million; the governmentcontinues to avoid removing the rich from the list of those eligible to get the monthly handouts.” 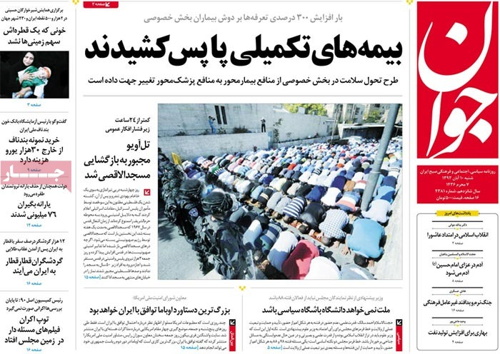 Kaenat: The Inspector General reports a land-grab worth around $160 million in the heart of the capital. 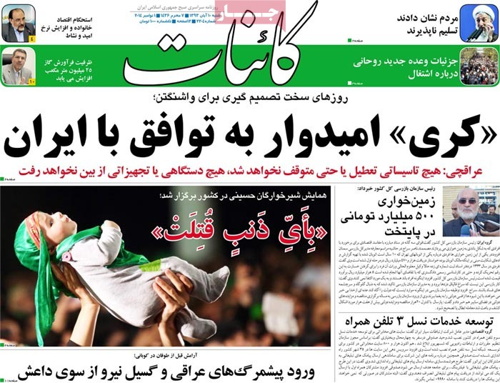 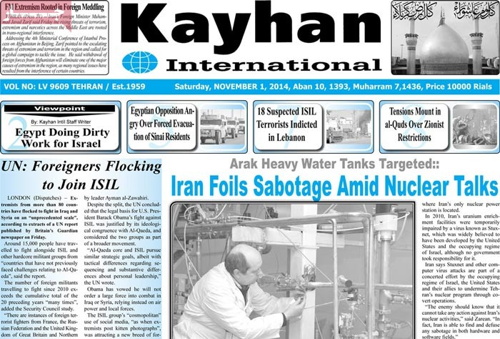 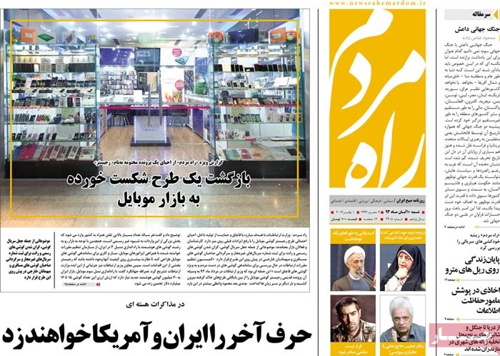 Roozan: “If Ayatollahs Mesbah Yazdi and Ahmad Jannati decide to run for the chairmanship of the Assembly of Experts, Ayatollah Rafsanjani will throw his hat in the ring. But if Ayatollahs Shahroodi and Tabasi run for the top post, Hashemi Rafsanjani will not contest the position,” said Teymour Ali-Asgari, a senior official with the Center for Strategic Research affiliated to the Expediency Council. 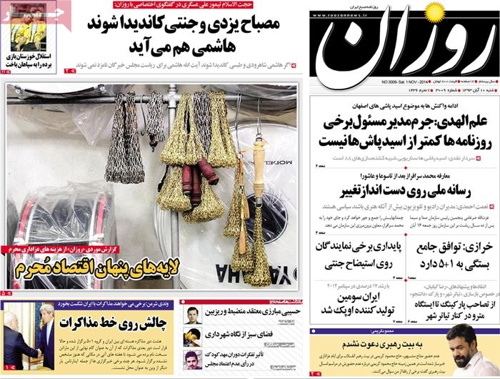 Sharq: “Sweden has recognized the Palestinian state. A global domino has started to fall.” 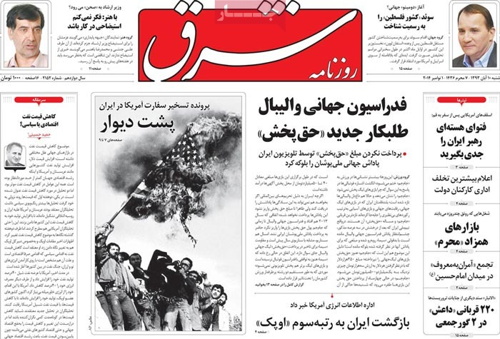 Taadol: “A black Friday for gold and silver. Prices plunge to four-year lows.” 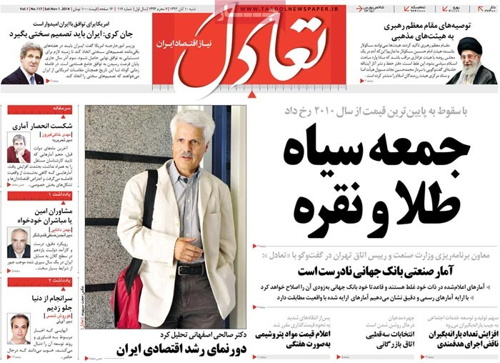