A look at Iranian newspaper front pages on Jan. 31

Remarks by President Hassan Rouhani that discrimination against women in sports should become history made headlines in most Iranian dailies on Saturday. Iranian newspapers also put on their front pages comments by Lebanon’s Hezbollah leader Seyyed Hassan Nasrallah in which the cleric lashed out at the Tel Aviv regime and said Hezbollah would retaliate against the Zionist regime if and when it harms the interests of the movement.

Abrar: “I hope a [nuclear] deal will be clinched by the end of the year [March 21, 2015],” said the director of the Atomic Energy Organization of Iran. 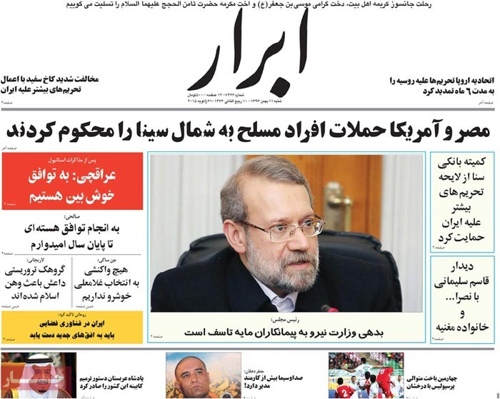 Aftab-e Yazd: The Intelligence Ministry has dismissed rumors that the director of a privately-run bank has fled abroad. 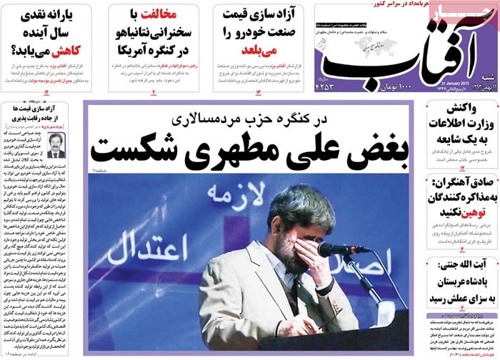 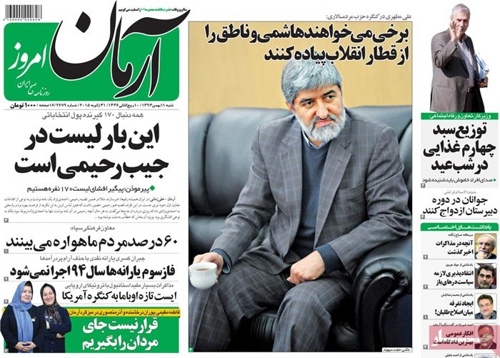 Asr-e Eghtesad: “The volume of trade between Iran and Russia is to hit $20 billion,” said Ali Akbar Velayati, a special envoy of President Rouhani after submitting a message to Russian President Vladimir Putin. 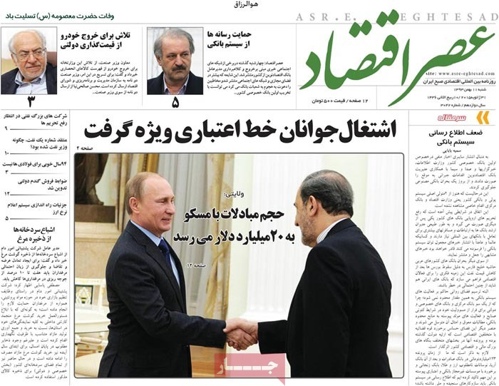 Asr-e Iranian: “Some think the US provides their most basic needs,” Tehran Friday prayer leader Ayatollah Ahmad Jannati said [in taking a swipe at those who support continued negotiations to cut a deal with the US]. 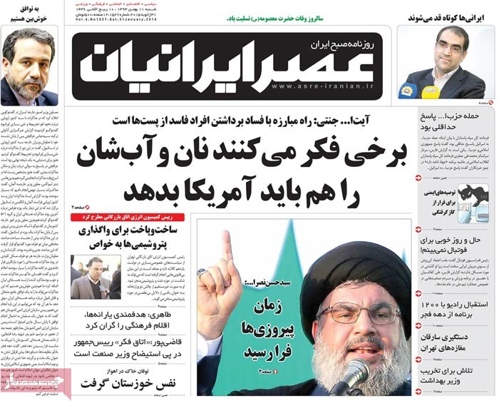 Asrar: “Imports of gasoline from abroad will stop as of next year [late March 2015],” said a deputy oil minister. 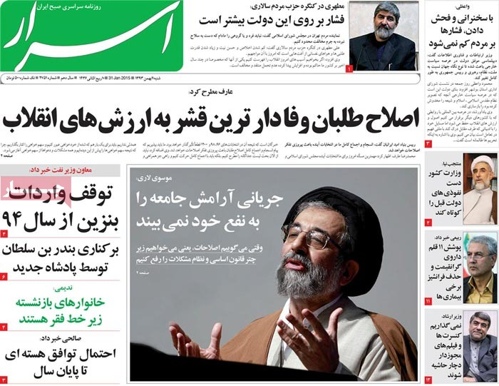 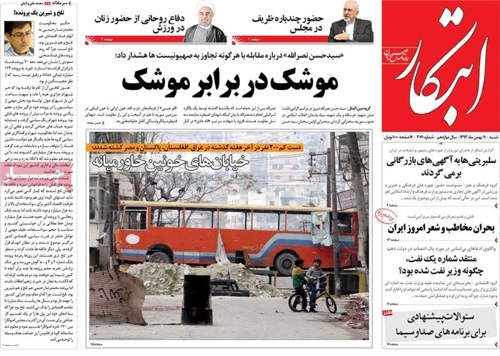 Emtiaz: “World oil giants are waiting for the removal of sanctions to find their way back to the Iranian market,” said the Iranian oil minister.

Emtiaz: Iranian sportsmen and women who bagged medals in Incheon Asian Games in South Korea have been awarded at a ceremony attended by President Rouhani. 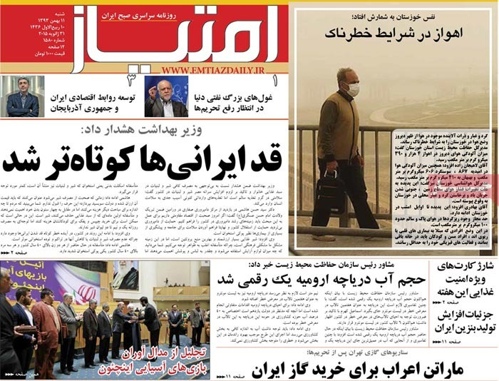 Etemad: Ghasem Soleimani, the commander of the Quds Force of the Islamic Revolution Guard Corps, has met with Seyyed Hassan Nasrallah, the leader of the Lebanese Hezbollah movement. 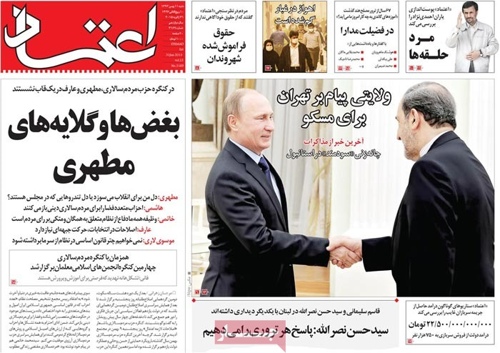 Ettela’at: “Discrimination against women in sports should come to an end,” said President Rouhani. 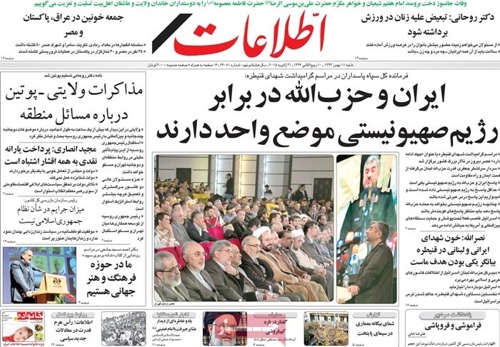 Hambastegi: “To help the reformist mentality win in the upcoming elections, we need to seek consensus and put together a single ticket,” said Mohammad Reza Aref, a senior reformist leader. 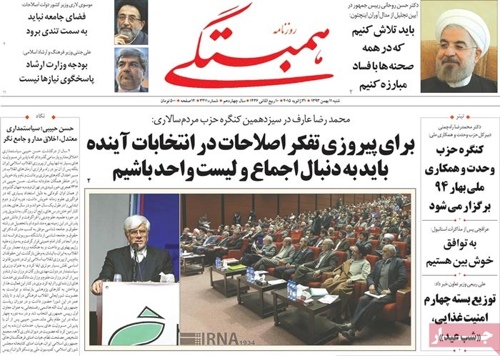 Ghanoon: Iran is to host a world gathering of tour leaders in 2017. 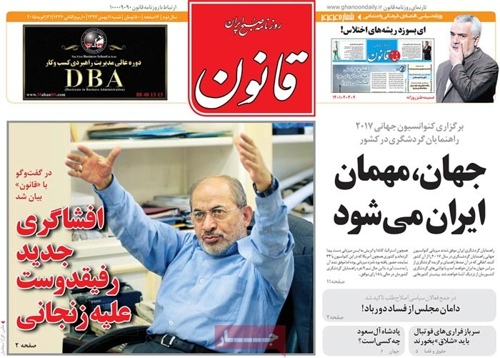 Jomhouri Islami: “Unfortunately, instead of circling the wagons, some are driving people out of the circle of revolution,” said Ali Motahari, a principlist deputy who represents Tehran in the Islamic Consultative Assembly. 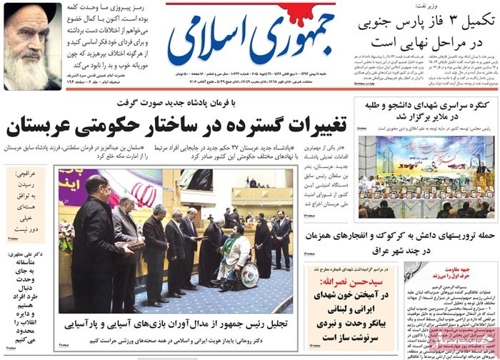 Kayhan: At the expense of Iranian reputation, the government has backed down in the face of US pressures by changing its nominee for UN ambassador [following America’s failure to grant a visa to the previous choice.] 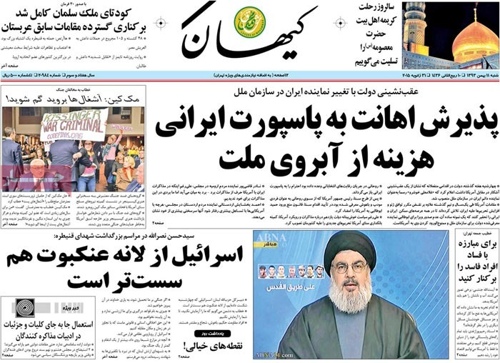 Khorasan: “Each year between $2 billion and $4 billion in low-quality Chinese clothing is smuggled into the country,” said a senior member of the commission that leads the fight against smuggling in goods. 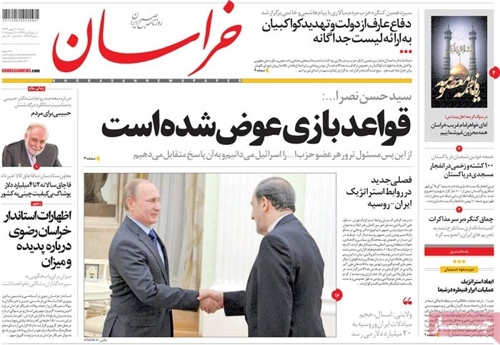