A look at Iranian newspaper front pages on Jan. 29

A visit by the Supreme Leader to the mausoleum of the late Imam Khomeini to pay respects to the architect of the Islamic Republic as the 36th anniversary of the Islamic Revolution nears appeared on the front pages of all newspapers on Thursday. Also on the cover of dailies was the retaliatory attack of Hezbollah on an Israeli military convoy.

Abrar: In a letter to the parliament speaker, four MPs have called for the list of deputies who have received financial aid from Mohammad Reza Rahimi [a convicted deputy of the former president] to be made public.

Abrar: “Government should be required to hand over development projects to the private sector,” said Parliament Speaker Ali Larijani. 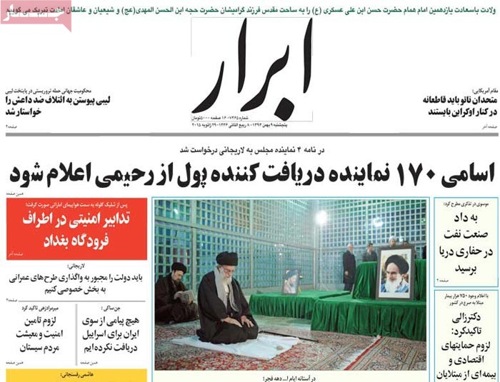 Abrar-e Eghtesadi: “Oil accounts for some 90 percent of the country’s GDP,” said the minister of industries, mines and trade.

Abrar-e Eghtesadi: Following a 50 percent rise in imports of consumer goods, a motion to question Mohammad Reza Nematzadeh [the minister of industries, mines and trade] will be debated on parliament floor. 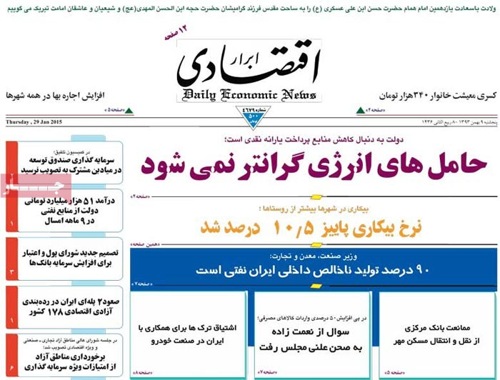 Afkar: The new Saudi King has made his first official comment on Iran. “Iran should not develop nuclear weapons.”

Afkar: Lebanon’s Hezbollah has retaliated against the Israeli attack. 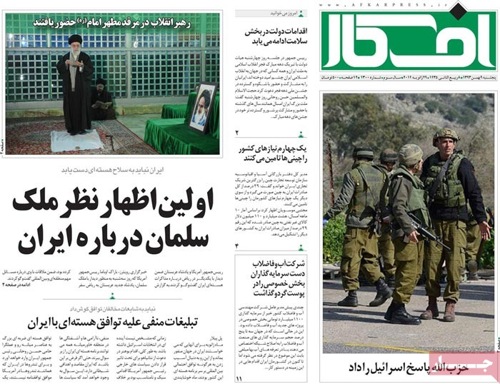 Aftab-e Yazd: The grandson of Imam Khomeini has urged President Rouhani – when he visited the mausoleum of the late Imam – to stick to his “prudence and bravery”. 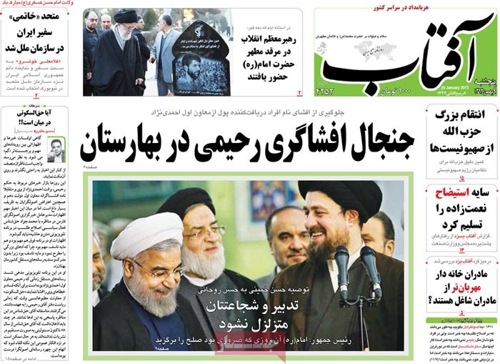 Arman-e Emrooz: A member of the committee looking into the corruption case involving billionaire Babak Zanjani has said four ministers have been questioned in connection with the case. 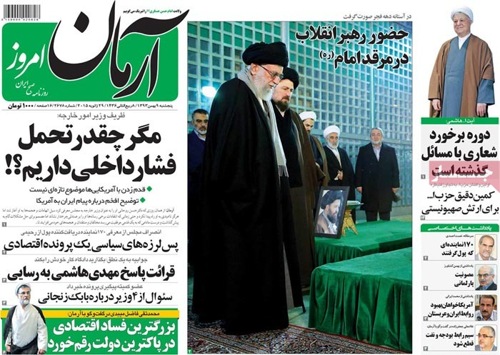 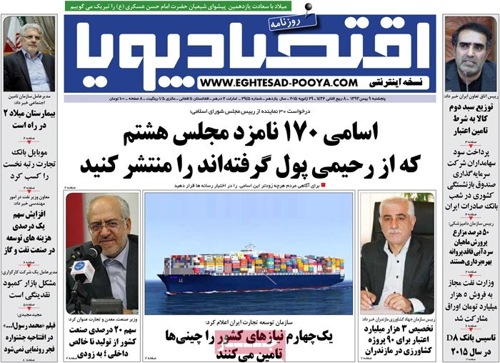 Emtiaz: Some 50 percent of those who develop cancer in Iran die of the disease. 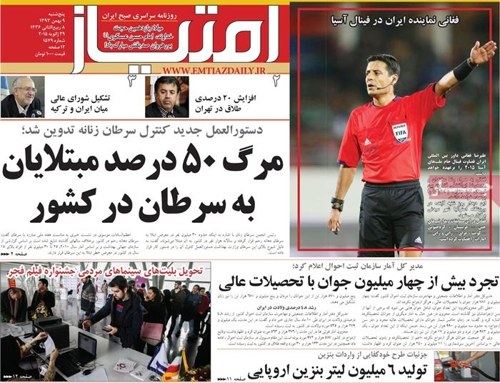 Etemad: “The crime Mohammad Reza Rahimi has been convicted of dates back to the time he was first vice-president,” said the spokesman of the judiciary. [His comment seems to be in response to former President Ahmadinejad’s statement that Rahimi’s corruption case has nothing to do with his presidency. 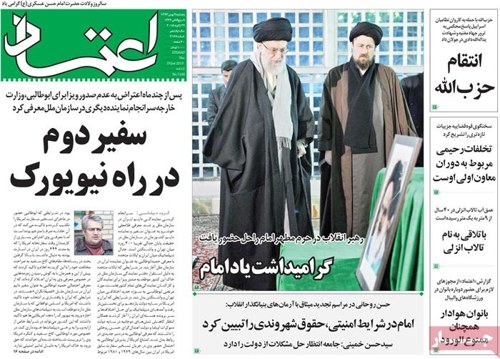 Ettela’at: The president has urged the public to turn out in force for festivities to mark the victory of the Islamic Revolution. 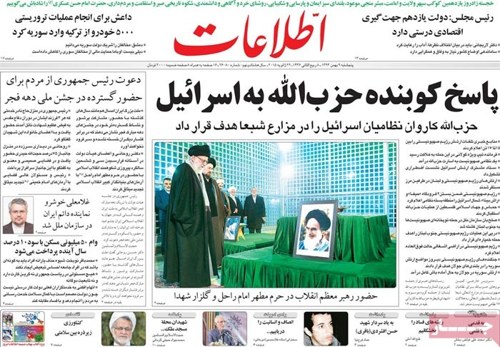 Hemayat: Judiciary Chief Ayatollah Sadegh Amoli Larijani paid respects to the founding father of the Islamic Republic by visiting his mausoleum, south of Tehran. “Imam established a link between politics and religiosity.” 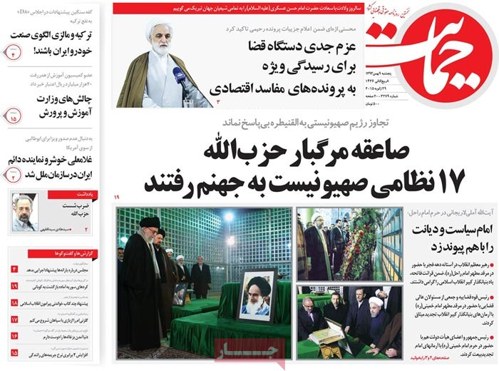 Jamejam: An Iranian referee will officiate the final of the AFC Asian Cup in Australia. 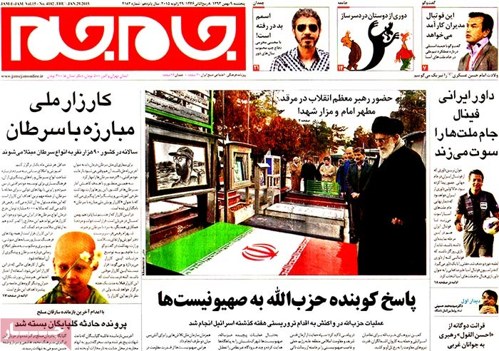 Jomhouri Islami: Talks between Iran and deputy foreign ministers of E3 [Germany, France and Britain] will open in Istanbul, Turkey later on Thursday. 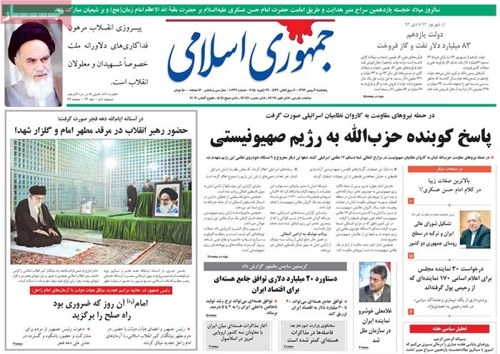 Kayhan: “Police prevent some 5 million liters of fuel from being smuggled out of the country on a daily basis,” said Police Chief Brigadier General Esmail Ahmadi Moghaddam. 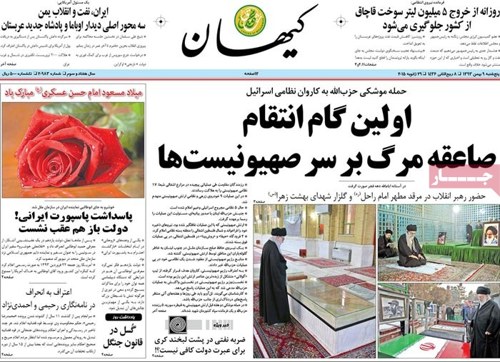 Khorasan: “Mohammad Reza Rahimi seeks to depict his conviction in a corruption case as being politically motivated,” said the judiciary spokesman. 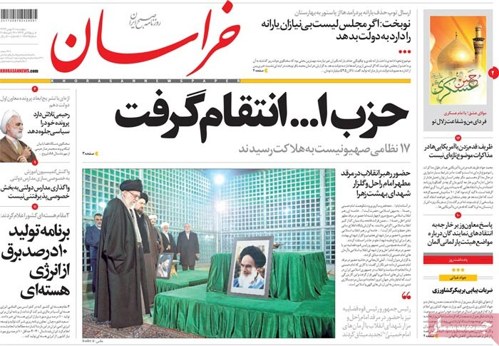 Mardomsalari: “Reports that a senior official at the Presidential Office holds dual citizenship are untrue,” said the government spokesman. 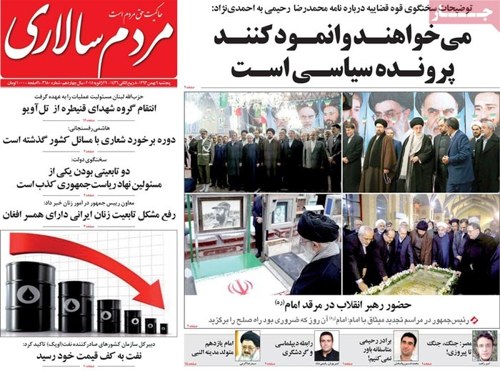 Qods: “The West should know that Iran’s patience is not infinite,” said the Iranian foreign minister. 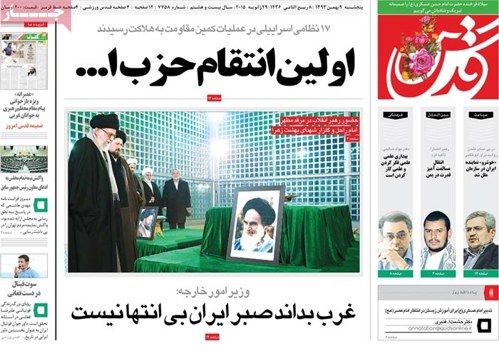 Sayeh: “Up to four million educated Iranian men and women are single,” said the National Organization for Civil Registration. 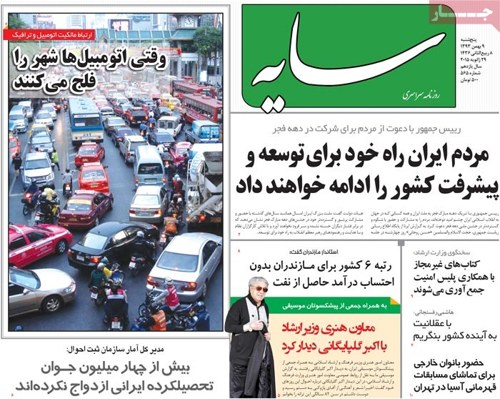