A look at Iranian newspaper front pages on Jan. 28

Comments by Foreign Minister Mohammad Javad Zarif that Iran and P5+1 see eye to eye on termination of sanctions made front-page headlines on Wednesday. Reformist dailies focused on the letter of grievance former Vice-President Mohammad Reza Rahimi has released following Mahmoud Ahmadinejad’s decision to distance himself from his deputy. And principlist papers underlined the call by three die-hard principlist MPs for adherence to the rules in the trial of the son of Ayatollah Hashemi Rafsanjani.

Afarinesh: “We have reached a deal with P5+1 over termination of all sanctions,” said Foreign Minister Mohammad Javad Zarif. 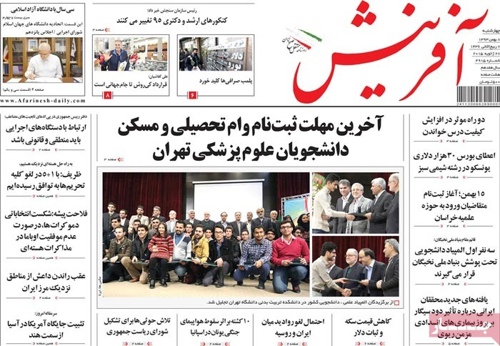 Arman-e Emrooz: The Russian ambassador to Tehran has said a visa waiver between the two countries is likely to come into effect shortly. 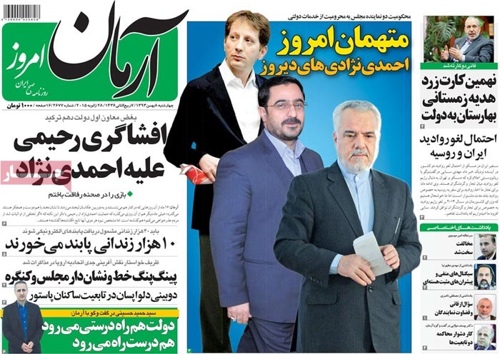 Asrar: The presidential office has issued a statement urging MPs not to build on unsubstantiated allegations when they question executive officials. 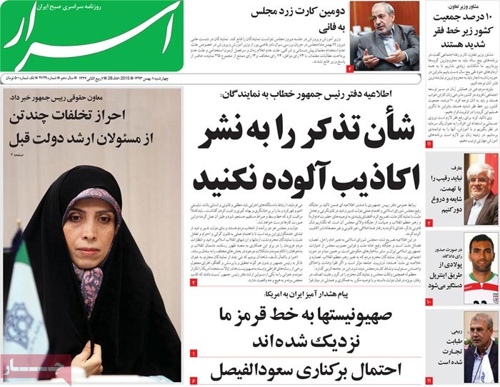 Ebtekar has used the headline “The Great Escape of a Draftee” to refer to the failure of Mehrdad Pouladi, a footballer who played for the national team in the AFC Asian Cup in Australia, to return home to serve his military duty.

Ebtekar: “I became a victim of your obstinacy and your measures to bring shame upon others,” said Mohammad Reza Rahimi, vice-president under Ahmadinejad, in a letter released in response to a statement by the former president in which he disavowed the actions of Rahimi, who is convicted of corruption and sentenced to more than five years in prison.

Ebtekar: Air pollution in the southwestern cities of Ahvaz and Abadan is 15 times more than the permitted level. 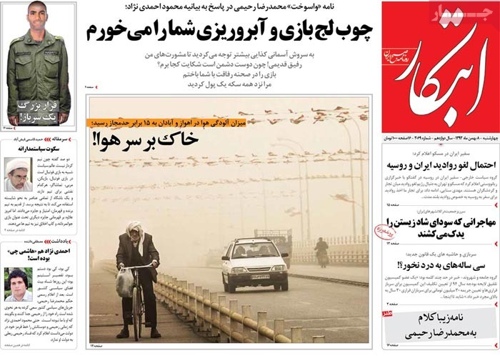 Emtiaz: Some 71 percent of the country’s population lives in cities. 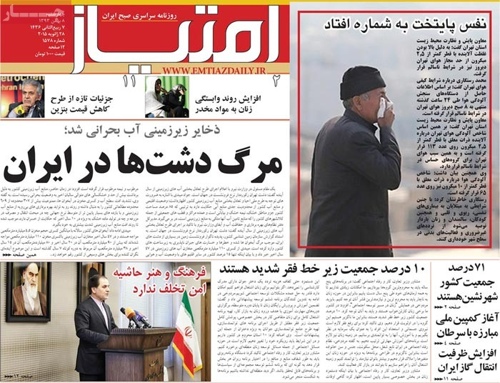 Etemad: “If Pouladi [a national soccer team player who has yet to serve his military duty] fails to return home voluntarily, we’ll have him arrested through Interpol,” said an official with the Conscription Organization.

Etemad: “Criticize as much as you want, I won’t fire back. I have kept silent for 10 months not to harm national interests, or the nuclear talks for that matter,” said Foreign Minister Zarif in comments aimed at his critics in parliament. 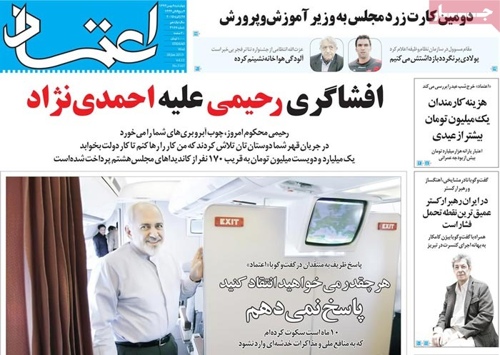 Ettela’at: A book on 5,000 years of engineering in Iran has been launched at Tehran University. A movie on the same theme was screened at the launch of the book.

Ettela’at: “Criticism leveled at the government is not well-intentioned,” complained the vice-president for parliamentary affairs. 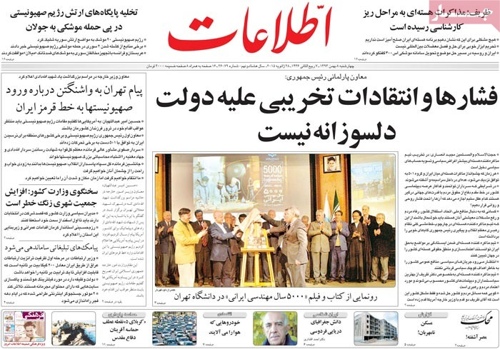 Hemayat: Some 10,000 prisoners are to wear electronic shackles.

Hemayat: Some 200 MPs have voted for a motion that requires the government to scrap the Geneva Deal in case new sanctions are imposed on Iran. 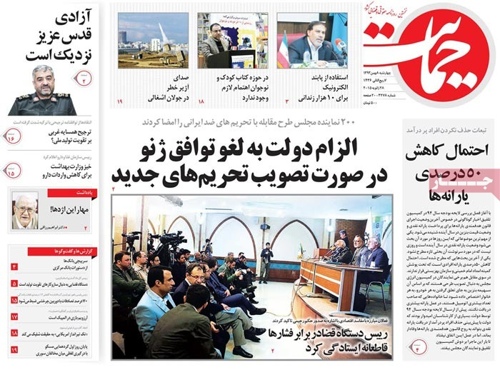 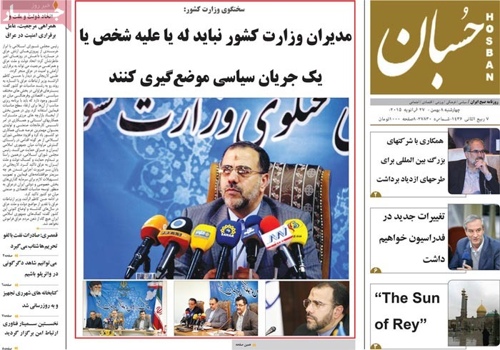 Jomhouri Islami: The education minister has been yellow-carded for a second time by MPs. That puts the education chief on the verge of impeachment.

Jomhouri Islami: There is division in the ranks of Republicans on Capitol Hill over continued nuclear talks with Iran. 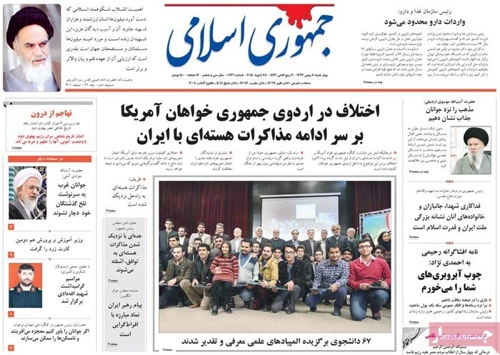 Kayhan: “Twenty members of the Jaish al-Adl terrorist group have been arrested,” the spokesman of the Interior Ministry said. 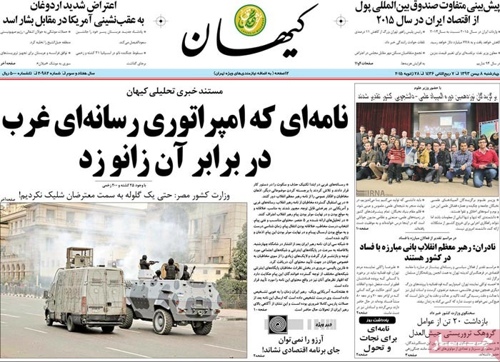 Mardomsalari: “Two MPs and a senior executive manager who served under Ahmadinejad have been found guilty of administrative offenses,” said the chairman of a panel addressing administrative corruption. 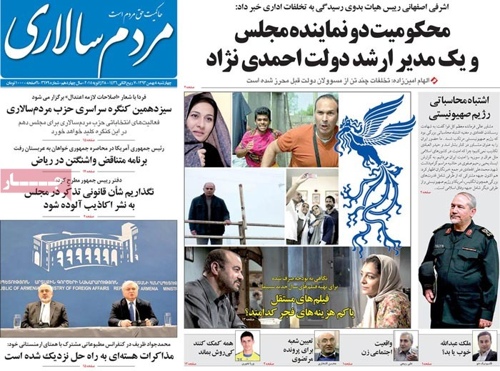 Qods: Officials should do something to help street children, up to 70 percent of whom are addicted to drugs and 40 percent are HIV-positive. 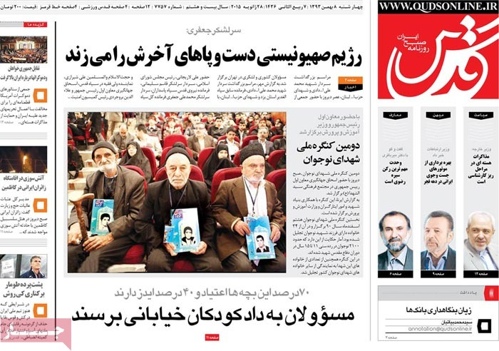 Resalat: Those who favor a clampdown on corruption have called for the corruption case involving Mehdi Hashemi [a son of Ayatollah Hashemi Rafsanjani] to be seriously followed. 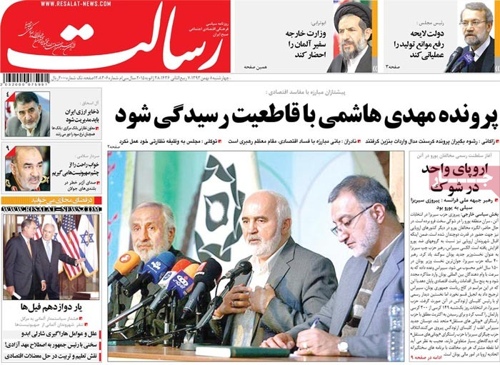 Shahrvand: A deputy foreign minister has said that following the martyrdom of General Allahdadi [during an Israeli helicopter gunship attack on Syrian soil] Iran warned the US about Israeli actions. 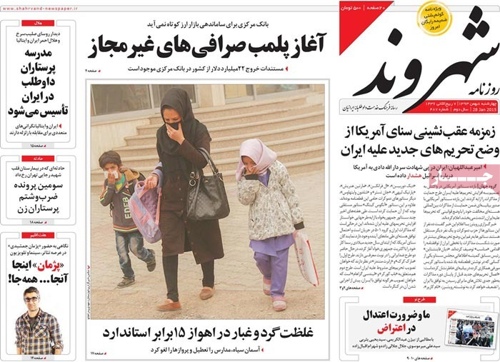 Sharq: The International Volleyball Federation has said Iran can host the FIVB Volleyball World League if it allowed female spectators into sporting arenas. 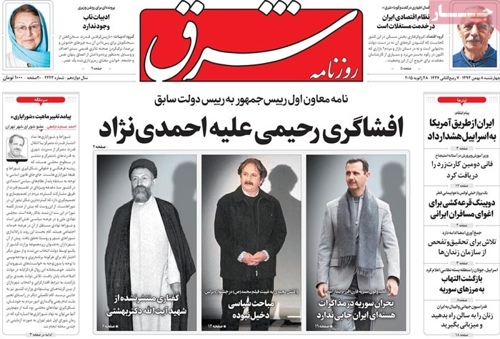 Tafahom: Foreign exchange offices which have failed to comply with regulations are being shut down. 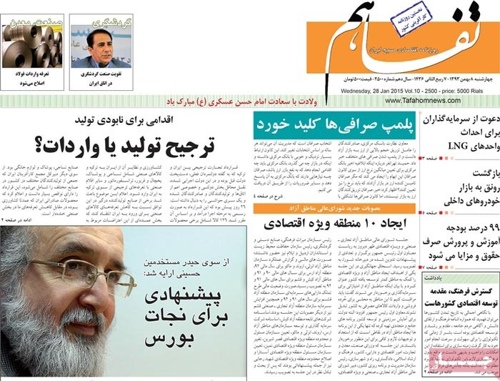