A look at Iranian newspaper front pages on Jan. 27

A meeting between the Supreme Leader and the visiting secretary general of the Popular Front for the Liberation of Palestine during which Ayatollah Khamenei said, “We will stay firm until the realization of the Palestinian cause,” dominated the front pages of Iranian papers on Tuesday. The lingering aftermath of the Iranian foreign minister’s stroll with US Secretary of State John Kerry in Geneva and the liberation of the Syrian Kurdish town of Kobani from the clutches of IS terrorists also appeared on the cover of the dailies.

Abrar: Universities of Tehran and Lisbon have signed a cooperation memorandum of understanding. 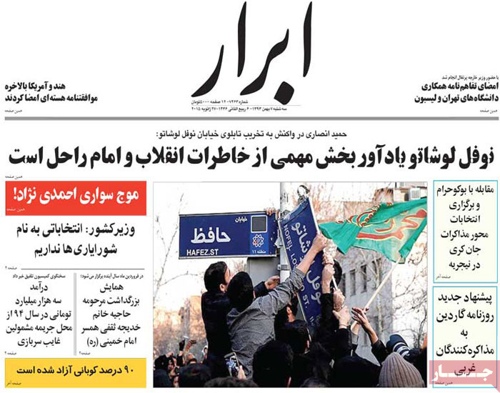 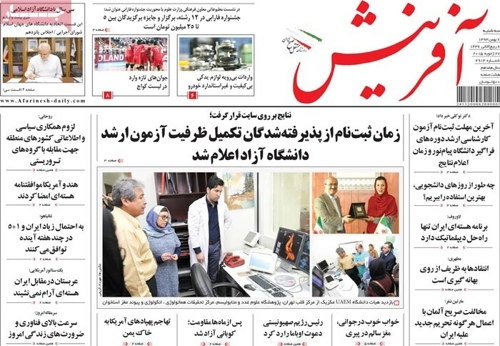 Afkar: “The outrageous crimes terrorist groups such as Boko Haram commit put a blight on human conscience,” said President Rouhani as he received the credentials of the new Kenyan ambassador to Tehran.

Afkar: Moscow is concerned about the security of Israel. The Russian foreign minister has said that conclusion of Iran’s nuclear case should not endanger Israel. 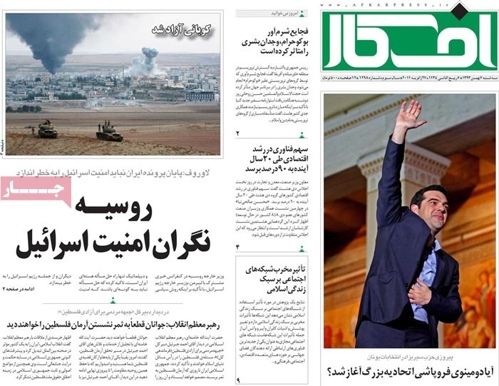 Aftab-e Yazd: The nuclear ping-pong of principlists carries on. Saeed Jalili [a former top nuclear negotiator under President Ahmadinejad] has denied reports that he was admonished [by the Supreme Leader] for his performance at nuclear talks in Istanbul, Turkey. 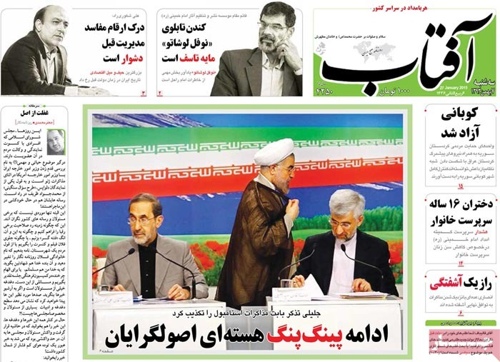 Arman-e Emrooz: “Nuclear talks should produce results as soon as possible,” said President Rouhani at a meeting with the visiting Portuguese foreign minister.

Arman-e Emrooz: “Criticism by some MPs of Foreign Minister Zarif [for his failure to call off his Paris visit and for his promenade with the US secretary of state in Geneva] is based on no solid ground,” said Principlist parliament deputy Ali Motahari. 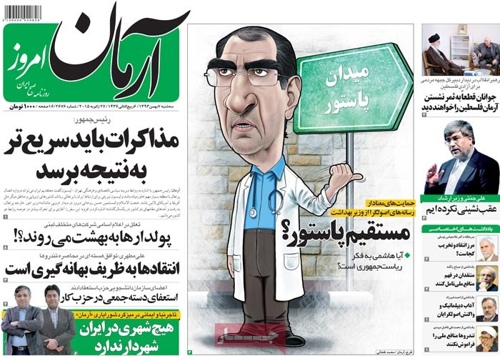 Asia: The Portuguese foreign minister and 120 businessmen accompanying him have held talks with Iranian businesspeople. 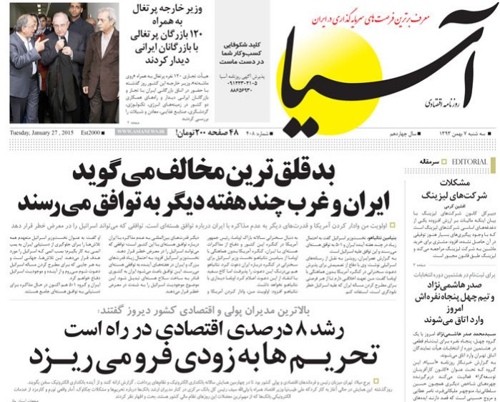 Asr-e Eghtesad: Inflation is expected to slip below 16 percent by the end of the year, a senior economic official told a conference on electronic banking. 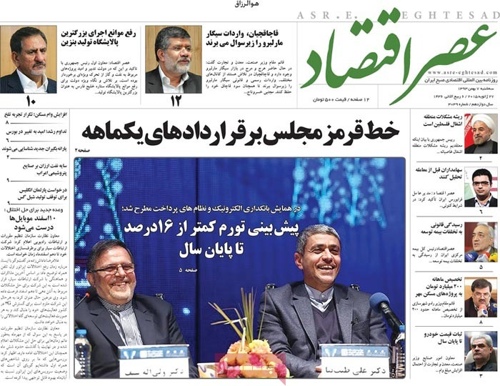 Asr-e Iranian: “The occupation of Palestinian territories lies at the center of regional problems,” said President Rouhani in a meeting with the new Jordanian ambassador to Tehran to receive his credentials. 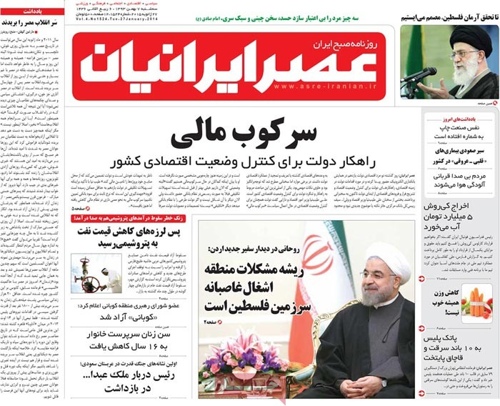 Asrar: “Sanctions will be lifted in the near future,” said the Iranian economy minister.

Asrar: “In the absence of lame excuses, a nuclear deal is within reach,” said the Iranian Parliament Speaker Ali Larijani.

Asrar: “Those who have been involved in corruption will find no safe haven,” said the Iranian attorney general. 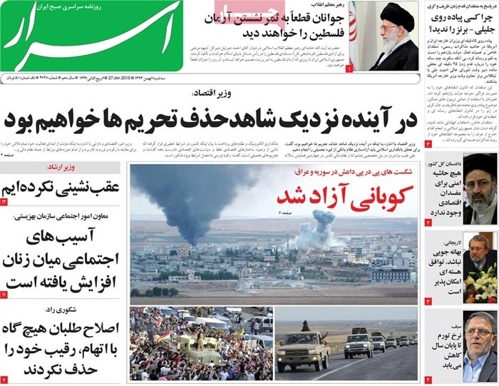 Ebtekar: The vice-president for parliamentary affairs has dismissed as libelous allegations that a member of President Rouhani’s Cabinet holds dual citizenship.

Ebtekar: IS has been kicked out of the Syrian town of Kobani near the border with Turkey. 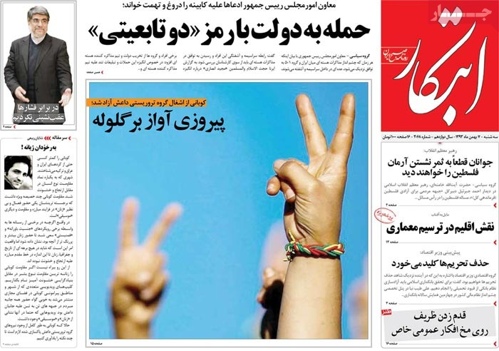 Emtiaz: The picturesque northern Iranian town of Masouleh is one step closer to being registered as a world heritage site. 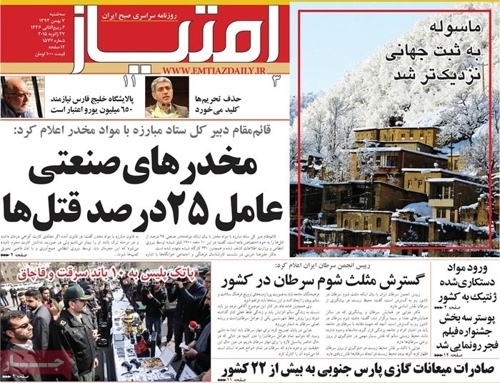 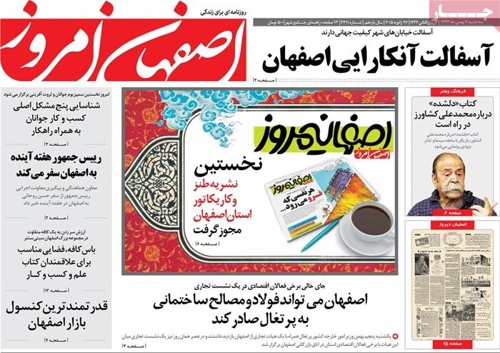 Etemad: “Is the walk Foreign Minister Zarif took with the US secretary of state in Geneva the only outstanding problem of the country!? Why didn’t anyone fault the former top negotiator [Saeed Jalili] for taking a similar stroll? The prospect of a nuclear deal sends shockwaves through the ranks of some groups. Criticism aimed at Zarif is not well-intentioned. Efforts to hammer the nuclear negotiating team are simply meant to settle a political score,” said Vice-President for Parliamentary Affairs Majid Ansari in reaction to a petition by 21 MPs to summon Zarif to parliament for explanation about his conduct.

Etemad: “We have not backed down in the face of pressures. The Tales reflect social realities; it does not seek to paint a negative image of society,” said the minister of culture and Islamic guidance. 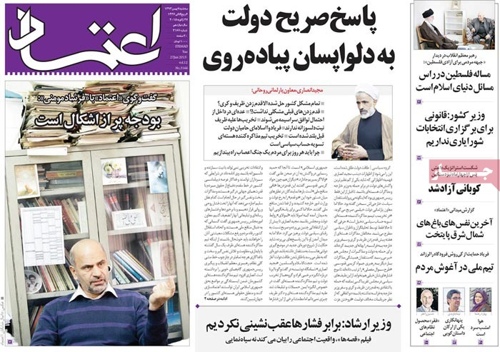 Ettela’at: A second Iranian well dug in the Caspian Sea has hit oil.

Ettela’at: Top Shiite cleric Ayatollah Sistani has praised Iraqi volunteer forces for their contribution to the liberation of Diyala Province.

Ettela’at: “Iran’s economic growth will hit 3 percent this year,” said the governor of the Central Bank. 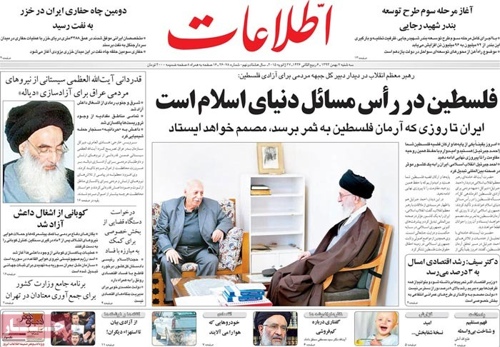 Ghanoon: “The nuclear case and the house arrest [of Messrs. Karroubi and Mousavi] won’t be settled through holding a referendum,” said Mohammad Reza Bahonar, a vice-speaker of the Islamic Consultative Assembly. 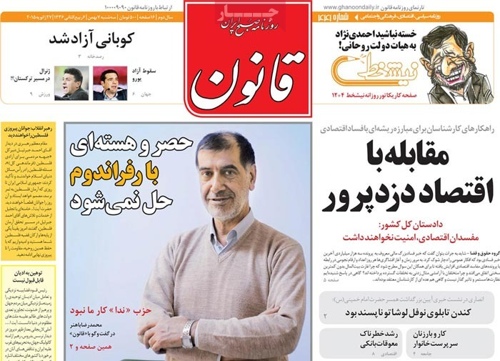 Hambastegi: “The West and Europe should win the trust of Iranians,” said Foreign Minister Zarif. 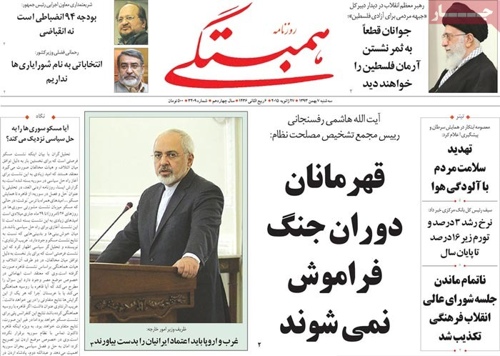 Hemayat: A number of MPs have called on the Foreign Ministry to summon the Germany ambassador to Tehran for “meddling in Iran’s internal affairs”. The appeal came after a top German MP called for an end to the house arrest of Mousavi and Karroubi [presidential hopefuls who disputed the results of the 2009 elections and sparked widespread unrest].

Hemayat: At a meeting with the Archbishop of the Armenian Church Nerses Bedros XIX, Iranian Judiciary Chief Ayatollah Sadegh Amoli Larijani said that the attitude of Western leaders to world nations is completely unjust. 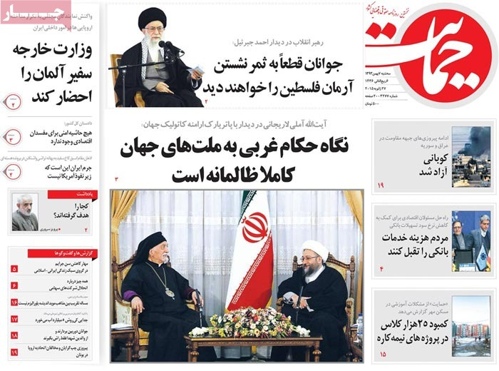 Jomhouri Islami: “The preferential deal with Turkey is the brainchild of the previous government!,” said the deputy industry minister. 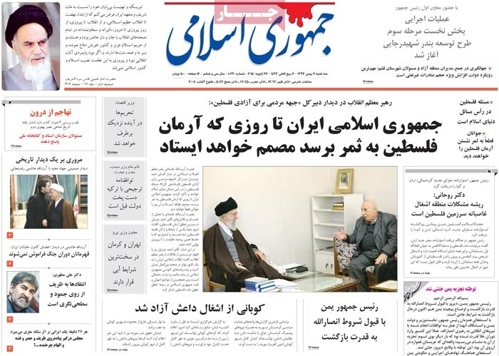 Kaenat: “The 11th government has stopped the distribution of cancer-causing gasoline,” said the director of the Environment Protection Organization. 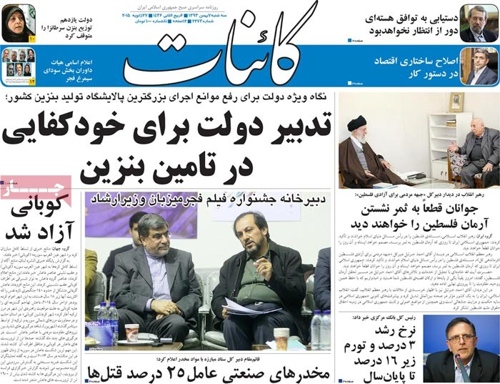 Kayhan: “The youth will definitely witness the realization of the Palestinian cause,” said the Supreme Leader at a meeting with the secretary general of the Popular Front for the Liberation of Palestine. 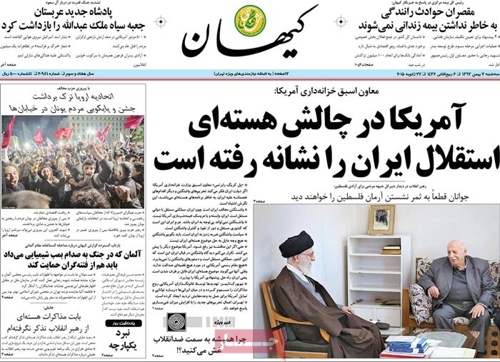 Resalat: “The initiative of the Supreme Leader [sending a message to European and North American youth] was a perfect reaction to Islamophobia,” said Ayatollah Mohammad Yazdi, [a former judiciary chief]. 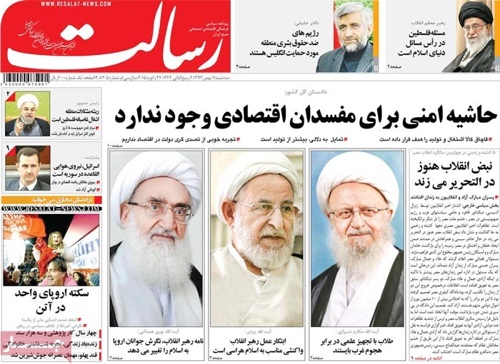 Shahrvand: The Iranian national football team has returned home to a hero’s welcome despite being eliminated in the quarterfinals of the AFC Asian Cup. 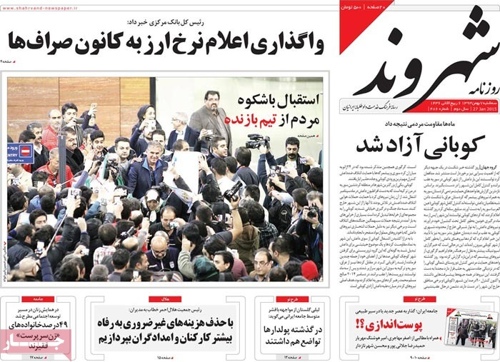