A look at Iranian newspaper front pages on Jan. 26

The top story of most Iranian newspapers on Monday was former President Mahmoud Ahmadinejad’s disavowal of the actions of his deputy Mohammad Reza Rahimi, who has been found guilty of corruption and sentenced to jail. Exchanges between Mahmoud Bahmani, a former governor of the Central Bank, and the presidential office over alleged violations of monetary rules and regulations by former and current governments and eruption of deadly clashes on the anniversary of the Egyptian revolution dominated the front pages of the Iranian dailies.

Afkar: “IS is neither Islamic nor a state,” said Iranian Foreign Minister Mohammad Javad Zarif. 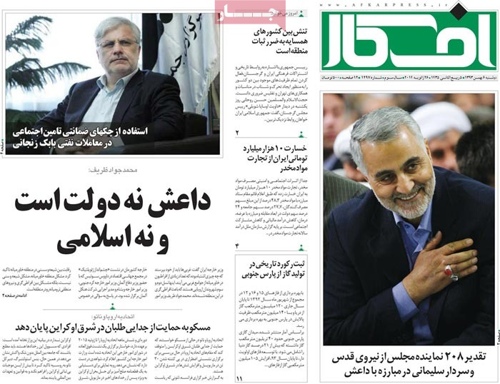 Arman-e Emrooz: [Following the conviction of former first vice-president] Mahmoud Ahmadinejad opted for justification rather than an apology. “The case involving Mohammad Reza Rahimi has nothing to do with my government,” a statement by the former president said.

Arman-e Emrooz: Up to $3 billion in debts owed by Babak Zanjani [who stands accused of massive corruption and is expected to take the dock soon] has yet to return to government coffers.

Arman-e Emrooz:Saeed Mortazavi, a former judge and Tehran prosecutor who has been disbarred for five years, has called for an open trial. 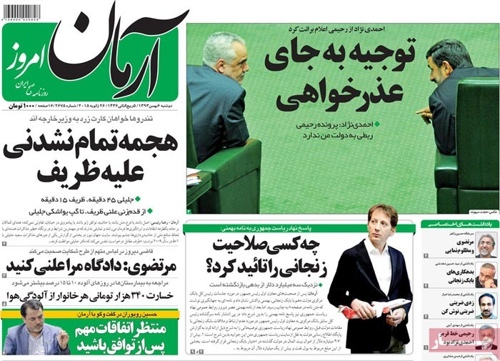 Asr-e Eghtesad: In a bid to shore up the economy parliament has voted for a bill to cut customs red tape. 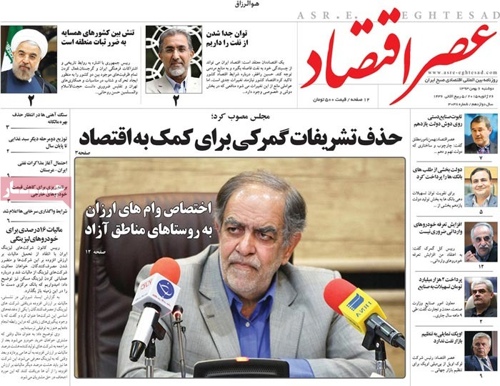 Asr-e Iranian: Some 20 MPs have released a statement that criticizes Foreign Minister Mohammad Javad Zarif for failing to call off his Paris visit [following the publication by a French weekly of cartoons insulting the Prophet Muhammad] and for taking a walk on the streets of Geneva with US Secretary of State John Kerry. 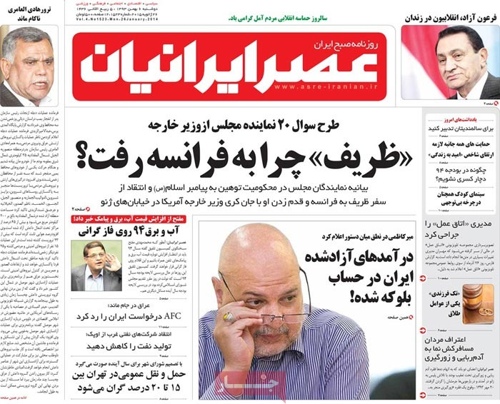 Asrar: “The danger posed by reactionaries is far greater than that of the enemies of Islam,” said Ayatollah Mousavi Bojnurdi, a member of the Combatant Clergy Association. 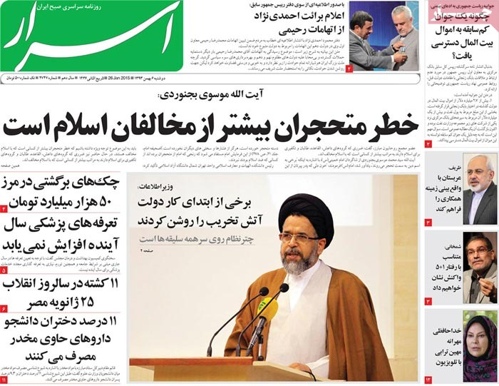 Ettela’at: More than 200 MPs have thrown their weight behind the Quds Force of the Islamic Revolution Guard Corps and appreciated the efforts of its commander [Major General Ghasem Soleimani] for the role he has played in the fight against ISIL.

Ettela’at: “The road to security and stability goes through cooperation,” said President Hassan Rouhani at a meeting with the visiting Georgian parliament speaker. 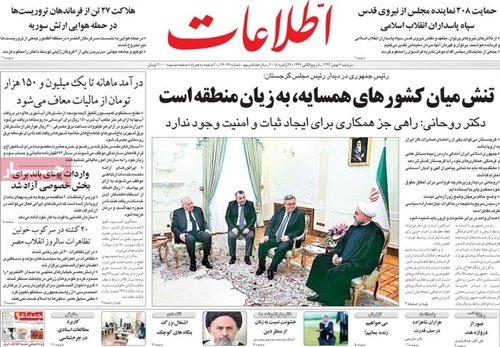 Hambastegi: “I hope Saudi officials act realistically and set the stage for cooperation on all fronts,” said the Iranian FM in a news conference with his Croatian counterpart.

Hambastegi: “We will stick to our rights,” vowed the Iranian president. 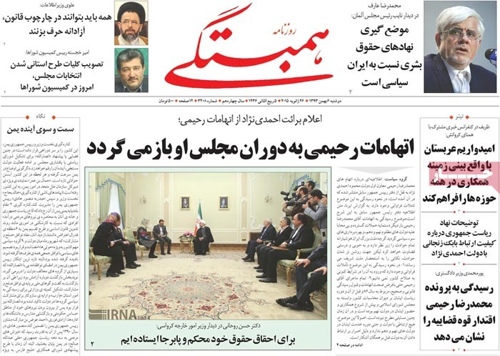 Hemayat: Members of Parliament’s Judicial Committee have praised the Judiciary for not backing off in the corruption case involving a former government official [Mohammad Reza Rahimi, vice-president under Mahmoud Ahmadinejad]. 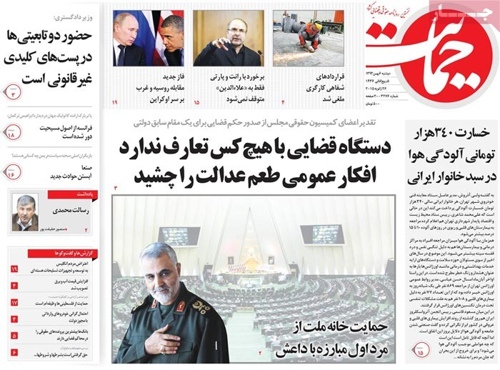 Iran: “The entire world will benefit from conclusion of a nuclear deal,” said President Rouhani at separate meetings with Croatian and Georgian officials. 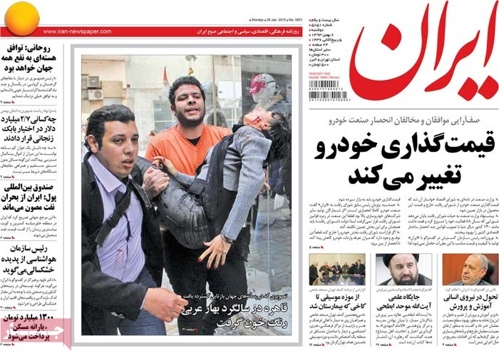 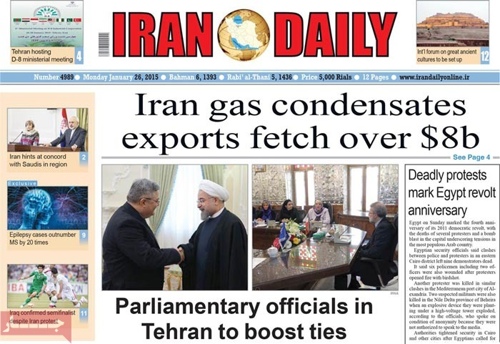 Jamejam: In a televised debate Sadegh Kharrazi, a former Iranian ambassador to Paris, and Alireza Zakani, a principlist MP, have evaluated the performance of the current and former Iranian nuclear negotiators. 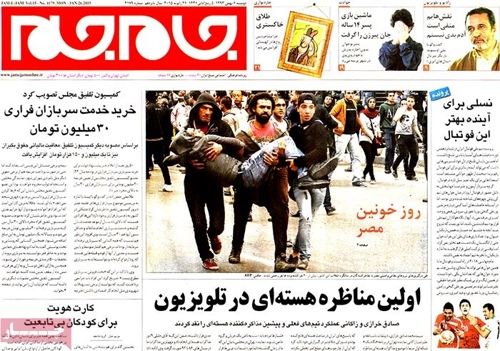 Kaenat: “The West should make up its mind [in nuclear talks between Iran and P5+1],” said Foreign Minister Zarif. 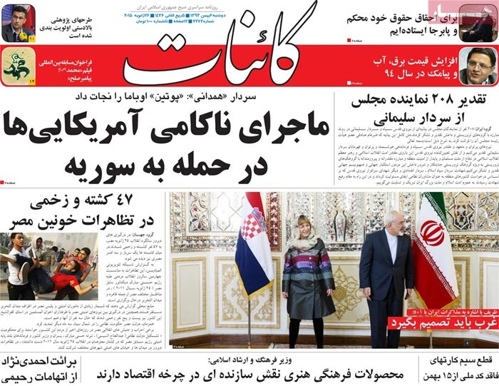 Kayhan has taken a swipe at the visiting vice-president of the German Bundestag for “meddling in Iran’s internal affairs” by calling for an end to the house arrest of “seditionist leaders” [presidential hopefuls who doubted the results of the 2009 elections and caused widespread unrest].

Kayhan: “Claims that [the West] respects nations are not compatible with disrespect to their faith,” President Rouhani told the Georgian parliament speaker. 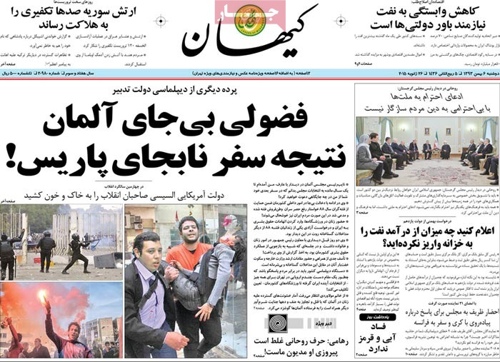 Mardomsalari: In a letter to the French ambassador to Tehran, Iran Press House has denounced the insulting behavior of Charlie Hebdo as being incompatible with human logic and instinct.

Mardomsalari: The Asian Football Confederation has dismissed Iran’s dope complaint against an Iraqi player in the AFC Asian Cup 2015. 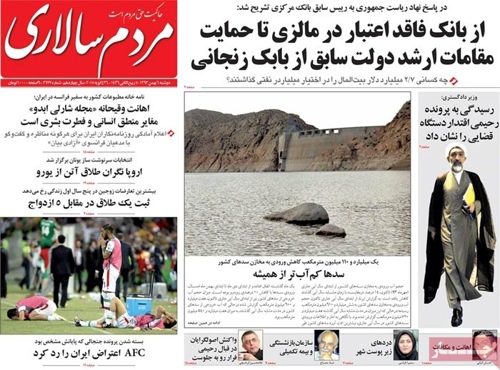 Payam-e Zaman: “Nuclear talks are a test of P5+1 honesty,” said the secretary of the Supreme National Security Council. 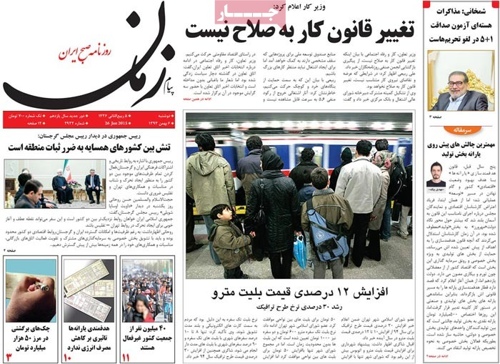 Shahrvand: The number of Iranians who suffer stroke each year stands at 160,000. 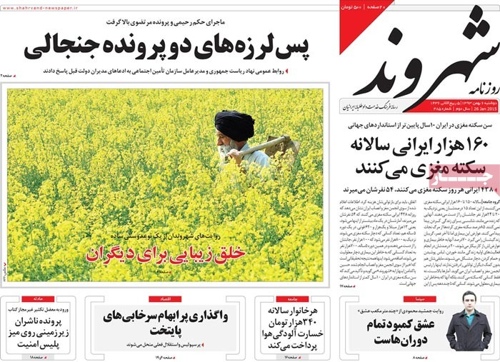 Siasat-e Rooz: The number of protesters killed in clashes that erupted on the anniversary of Egypt’s revolution is now in double digits. 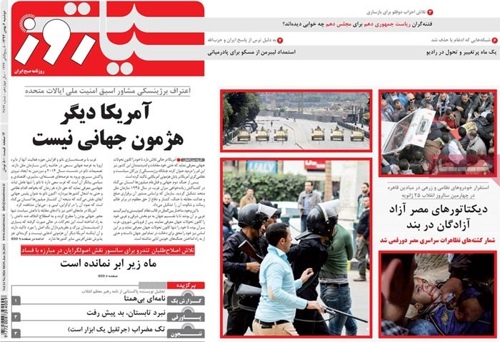