A look at Iranian newspaper front pages on Jan. 25

A warning to the US Congress by Foreign Minister Mohammad Javad Zarif that the Iranian parliament would retaliate in case Capitol Hill imposed new sanctions on Tehran dominated the front pages of Iranian dailies on Sunday. Threats by a deputy commander of the Islamic Revolution Guard Corps against Israel for its killing of an Iranian general in Syria and the aftermath of the Saudi king’s passing appeared on the covers of the newspapers too.

Aftab-e Yazd: The countdown is on for the imprisonment of Mohammad Reza Rahimi, a former first vice-president [whose corruption verdict has been upheld by the Supreme Court]. 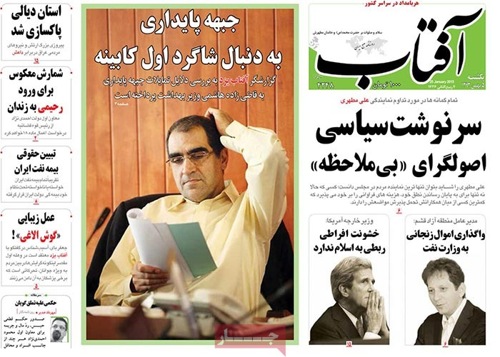 Arman-e Emrooz: Qeshm Airlines has been handed over to the Oil Ministry as part of the debts Babak Zanjani [a billionaire charged with massive corruption] owed to the government. 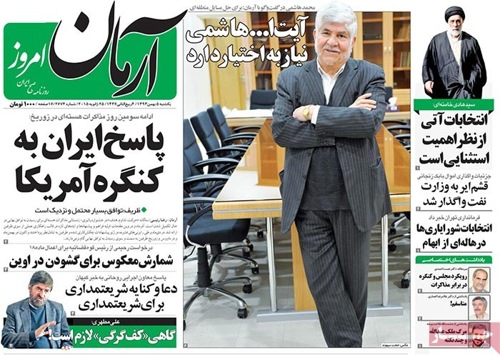 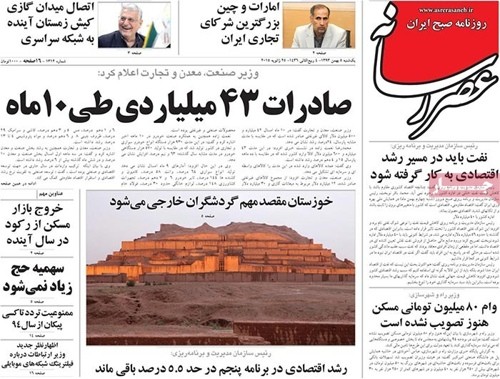 Asrar: “Iran’s environment is teetering on the brink,” said Director of the Environment Protection OrganizationMasoumeh Ebtekar. 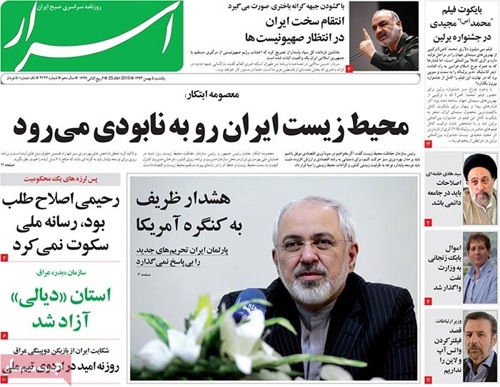 Eghtesad-e Pooya: “We will be able to build on resistance-based economy to run the country on a budget of $40 billion,” said the head of the Management and Planning Organization. Emtiaz: Natural gas production on Kish Island will get underway as of next year [starting on March 21, 2015]. 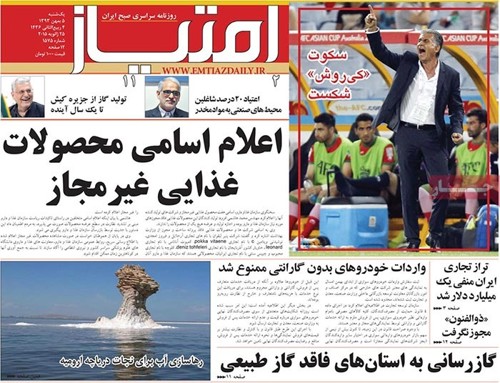 Etemad: President Rouhani has extended congratulations to the new Saudi King on his accession to the throne. 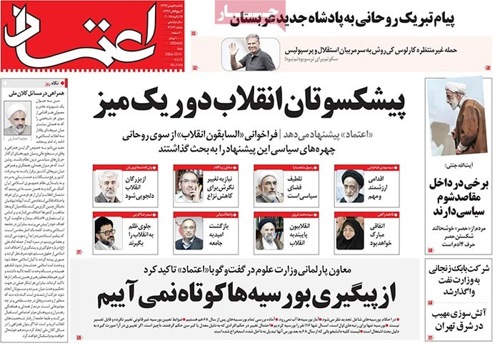 Ettela’at: Iraq’s Diyala Province, which had been overrun by IS terrorists, has been relieved.

Ettela’at: Services of Gholam Hossein Amirkhani, the father of Iran’s contemporary calligraphy, have been appreciated in a ceremony. Hambastegi: “Iran will respond to any move by the US Congress by a huge leap in nuclear technology,” said Parliament Speaker Ali Larijani. Javan: “We will arm the West Bank; the Zionist regime of Israel is in for an extraordinary act of retaliation,” said the deputy commander of the Islamic Revolution Guard Corps. 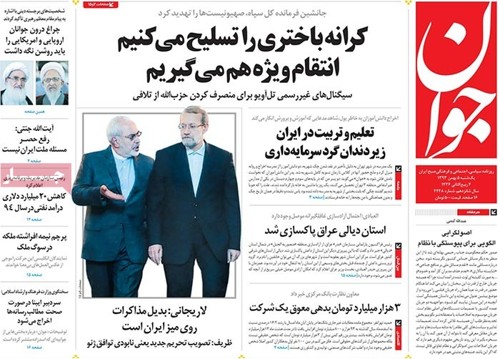 Jamejam: Importing cars that have no warranty has been banned. 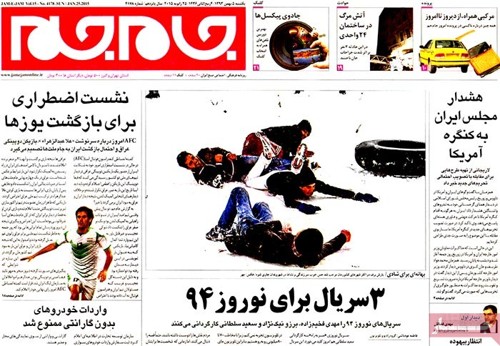 Jomhouri Islami has quoted Foreign Minister Zarif as saying, “We will clinch a deal [with P5+1] pretty soon.”

Jomhouri Islami: A new chapter has opened in cooperation between Iran’s Mobarakeh Steel Company and Oman. 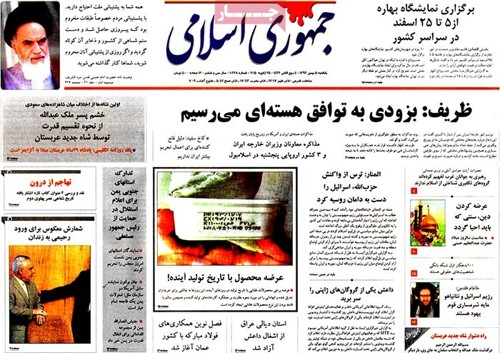 Kayhan: Fearing retaliation, the Zionist regime has called on Russia to convey a message to Lebanese Hezbollah, saying that Tel Aviv does not seek heightened tensions. 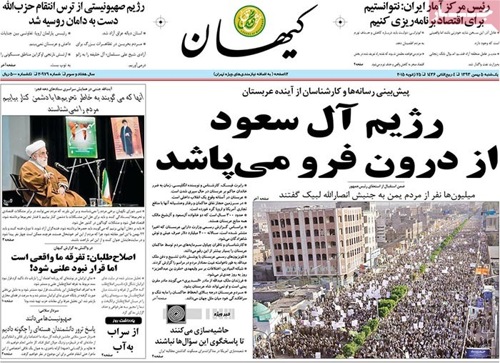 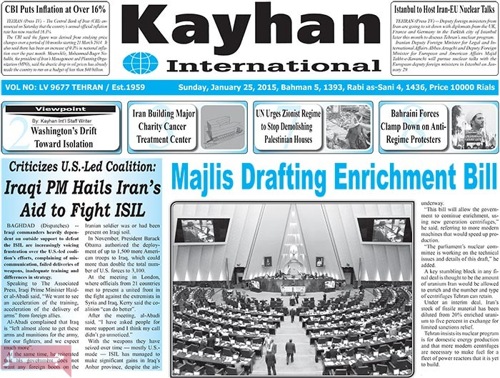 Khorasan: Seven provinces across the country have been blanketed by snow. 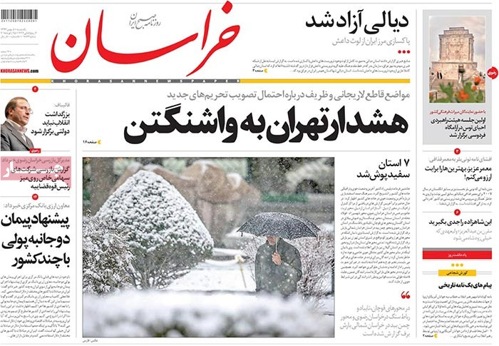 Mardomsalari: “We are not planning to block WhatsApp and Line,” said the minister of communications and information technology. 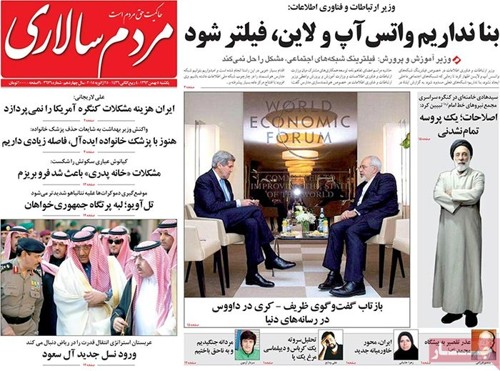 Sharq: “Those who call for the house arrest [of Mousavi and Karroubi, two candidates who doubted the results of the 2009 presidential elections and sparked widespread unrest] to be lifted must be slapped in the mouth,” said Ahmad Jannati, the secretary of the Guardian Council. 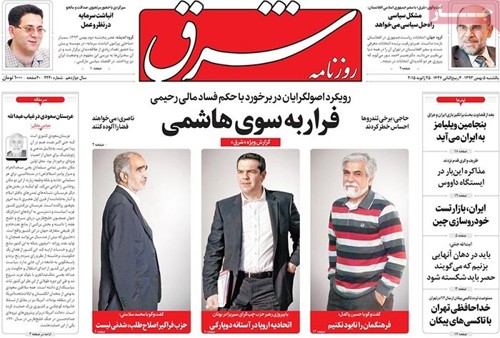 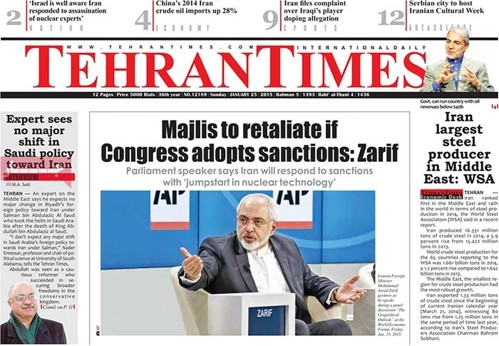