A look at Iranian newspaper front pages on Jan. 22

Those who act in violation of rules and regulations should be seriously dealt with, that was a comment Supreme Leader Ayatollah Seyyed Ali Khamenei made at a meeting with sportsmen and women which dominated the front pages of Iranian newspapers on Thursday. Reformist dailies put the Supreme Court ruling in the case involving Mohammad Reza Rahimi, vice-president when Ahmadinejad was in office, on their covers too. Also in the headlines was the dismissal by the government spokesman of criticism aimed at Foreign Minister Mohammad Javad Zarif for taking his one-on-one negotiations with the US top diplomat to the streets of Geneva.

Abrar: “Steps have been taken forward in nuclear talks,” Parliament Speaker Ali Larijani said at a meeting with Iranian expats in Istanbul, Turkey.

Abrar: “We are ready to treat the British mission in Tehran like any other foreign embassy,” said Iranian Foreign Minister Mohammad Javad Zarif. 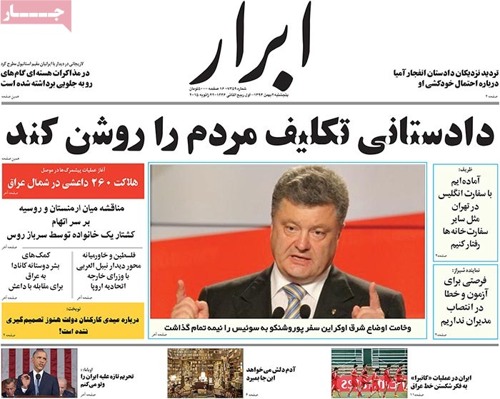 Abrar-e Eghtesadi: The reserves of the National Development Fund have increased by $10 billion.

Abrar-e Eghtesadi: “For now there are no plans to raise gasoline prices,” said the Iranian oil minister. 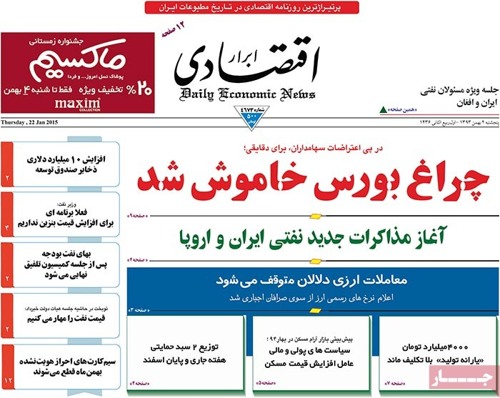 Afkar: Government Spokesman Mohammad Bagher Nobakht has dismissed as “trivial” the criticism aimed at Foreign Minister Zarif for taking a stroll in Geneva with US Secretary of State John Kerry. 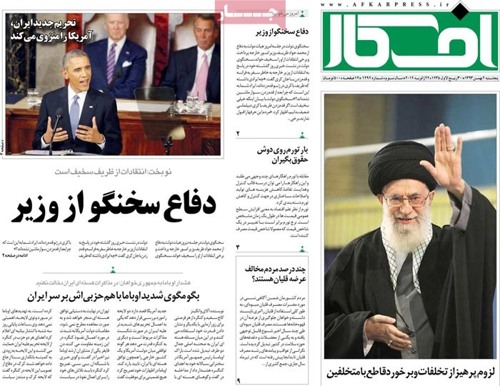 Arman-e Emrooz: Mohammad Reza Rahimi, a former first vice-president under Mahmoud Ahmadinejad, has been sentenced to five years and 91 days in prison and fined almost $1.3 million. The Supreme Court has upheld part of his conviction at a lower court. 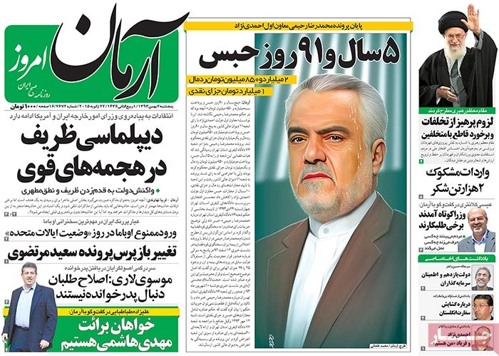 Ebtekar: Brigadier General Mohammad Reza Naghdi, who leads the Basij Volunteer Force, has said that FM Zarif should officially apologize for taking a walk on the streets of Geneva with his US counterpart. 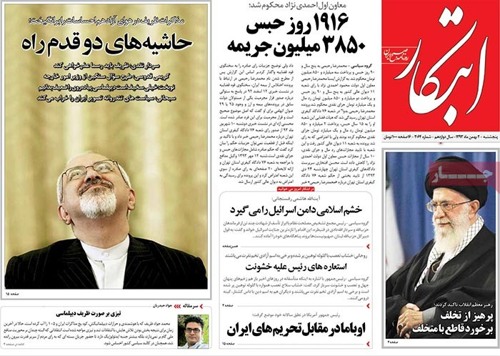 Etemad: In a meeting with sportsmen and women, the Supreme Leader has said that those who violate the rules should be seriously dealt with. 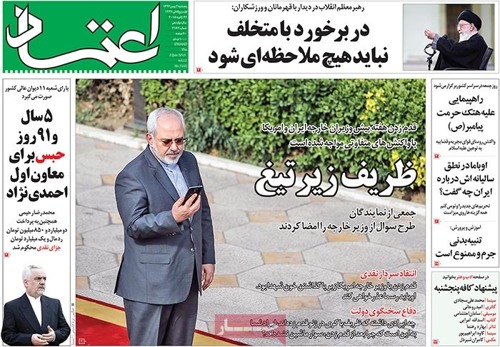 Farhikhtegan: “Drought is alarming,” said the head of the Climatology Research Center. 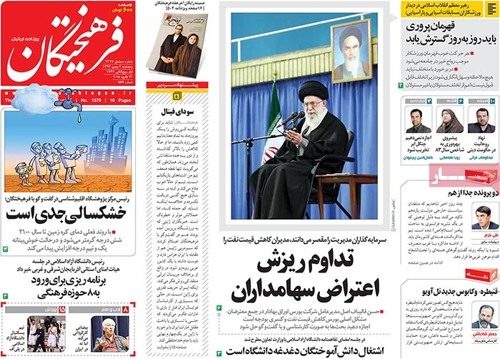 Hemayat: Judiciary Chief Ayatollah Sadegh Amoli Larijani has called on Foreign Ministry officials to review their interactions with countries which support insults at the Muslim faith. 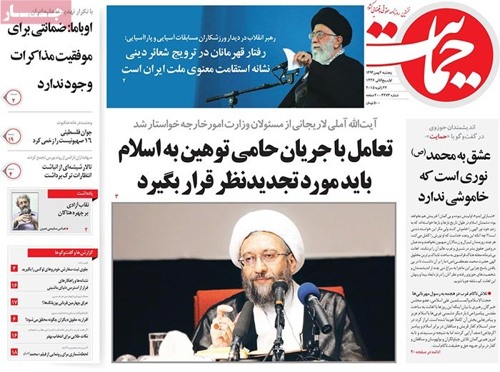 Iran: “Despite lies and measures by some that run counter to national interests, the government has built on public support in successfully managing the economy and securing growth,” President Rouhani said at a Cabinet session. 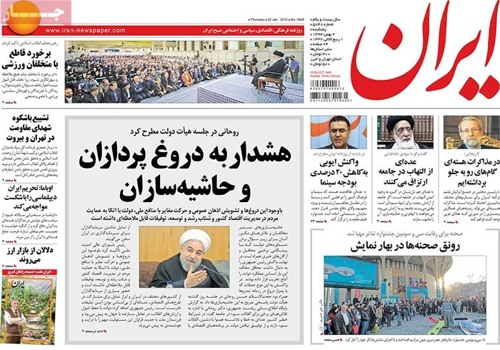 Jomhouri Islami: Electricity generation at the country’s power plants is up by 8,000 MW.

Jomhouri Islami: A funeral procession has been held in Tehran for senior Revolution Guards commander Brigadier General Mohammad Allahdadi, who was martyred in an Israeli air raid in Syria earlier in the week. 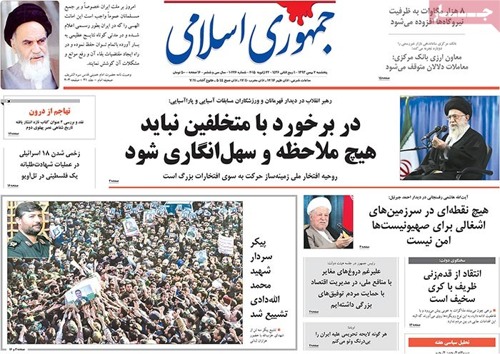 Kaenat: The US has reacted to the visit to Iran by the Russian defense minister. A State Department spokesperson has said delivery of the S300 missile system to Iran remains unacceptable. 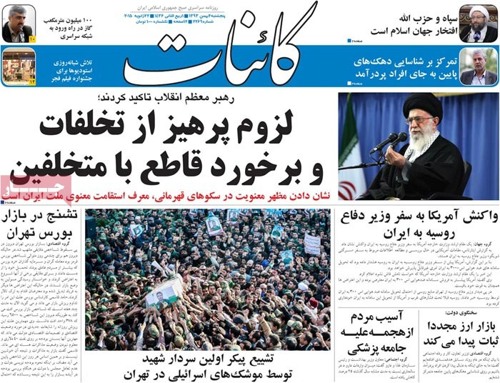 Kayhan: Israel sounds regretful and says it didn’t know that an Iranian military commander was in the convoy its helicopter gunships attacked in Syria! 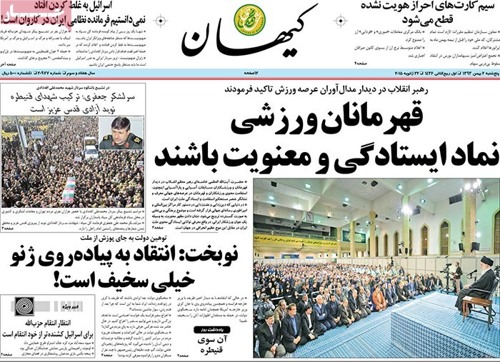 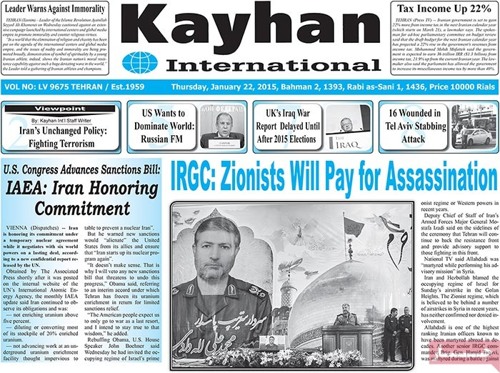 Khorasan: In a message to the youth in Europe and North America, the Supreme Leader has urged them to seize the opportunity to develop a clear, unbiased understanding of the Muslim faith. 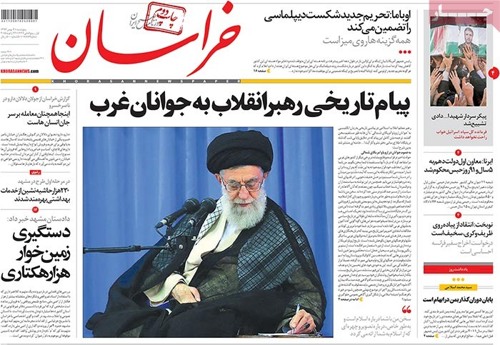 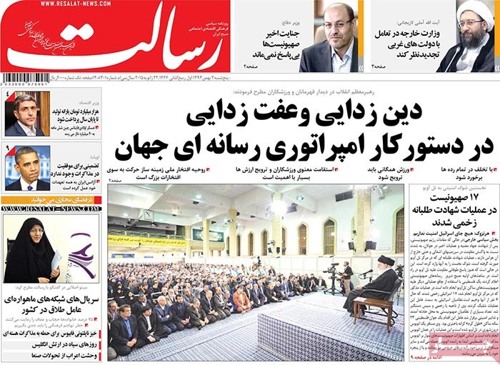