A look at Iranian newspaper front pages on Jan. 20

The advance of the Iranian national soccer team to the quarterfinals of the AFC Asian Cup in Australia following three back-to-back group-stage victories dominated the front pages of the Iranian dailies on Tuesday. A huge rally outside the French embassy in Tehran in protest against the publication of cartoons by a French weekly insulting the Prophet Muhammad was on the cover of many dailies too. The foreign minister’s expression of Iran’s readiness to strike a deal with P5+1 within a month made front-page headlines as well.

Afarinesh: Russia says Iran and P5+1 will have clinched a nuclear deal by the end of March.

Afarinesh: A brigadier general with the Islamic Revolution Guard Corps was martyred in an airstrike by Israel on Syria’s Golan Heights. 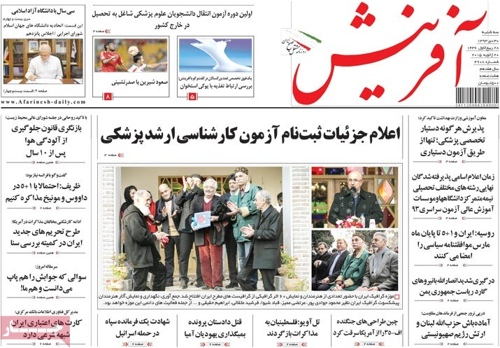 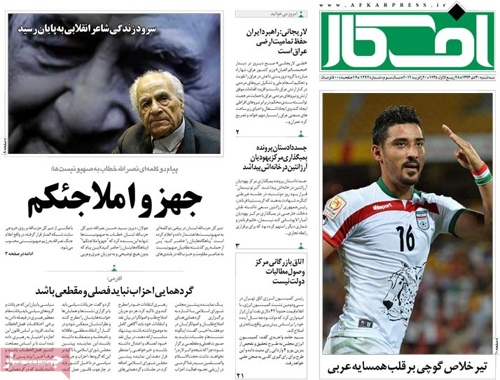 Aftab-e Yazd: Some Tehran residents who ride the subway to work ended up on the same train with President Rouhani and his foreign minister yesterday. During the impromptu meeting on board the subway car, a number of residents asked the president to keep the nuclear talks on the same track they have been so far.

Aftab-e Yazd: “We went out for a walk to leave a tense atmosphere that prevailed in the conference room,” Foreign Minister Mohammad Javad Zarif said of the walk he took alongside US Secretary of State John Kerry on the streets of Geneva earlier this week. 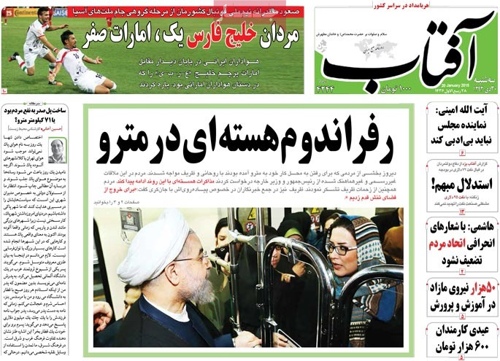 Arman-e Emrooz: “We won’t face any problem even if oil prices plunged to $25 a barrel; no scenario has been put forth to raise gasoline prices,” said Oil Minister Bijan Namdar Zanganeh. 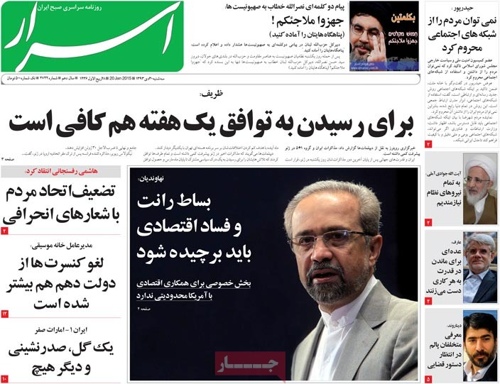 Ebtekar: Those who thronged outside the French embassy in Tehran in protest at insults to Prophet Muhammad called for the expulsion of the French ambassador and the impeachment of Iran’s foreign minister. 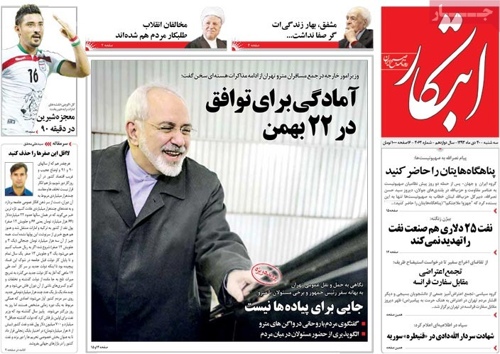 Emtiaz: Moshfegh Kashani, an Iranian poet, has passed away. 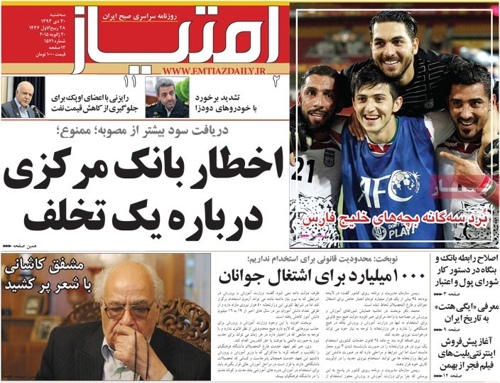 Etemad: “Stability in Afghanistan will be to the benefit of both Iran and the US,” said Afghan President Ashraf Ghani.

Etemad: Cries of anger at Charlie Hebdo were heard in Tehran’s Neauphle-le-Château [a street where the French embassy is located]. 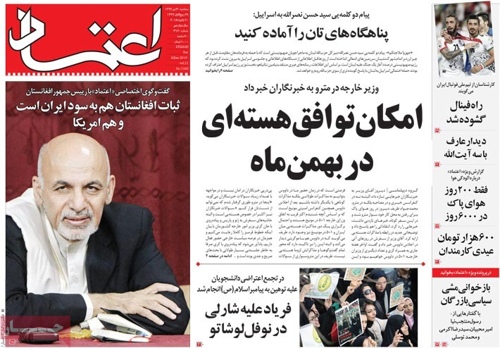 Ettela’at: President Rouhani and his ministers took the subway to work on the Clean Air Day: Monday. 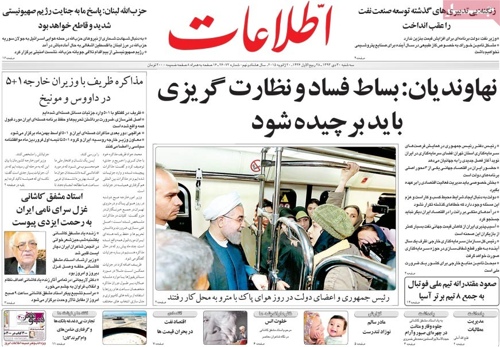 Iran: “Do not sacrifice national interests for factional considerations,” Foreign Minister Zarif said in comments aimed at those who have stirred up commotion in protest at nuclear talks.

Iran: “Reza Ghoochannejad, broke down the resistance of the Emirati team at the 90th minute; Iran 1- UAE 0.” 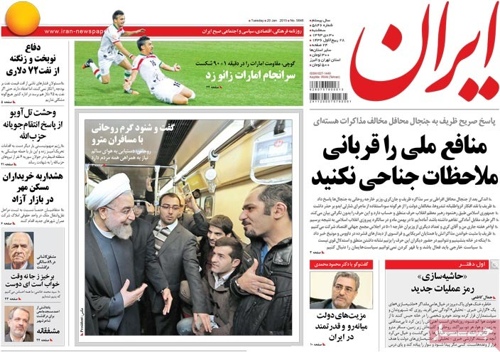 Jamejam: Expressing Iran’s readiness to conclude a nuclear deal by theanniversary of 1979 Islamic Revolution [February 11], the foreign minister said, “The wrong approach of the US has prolonged the talks.” 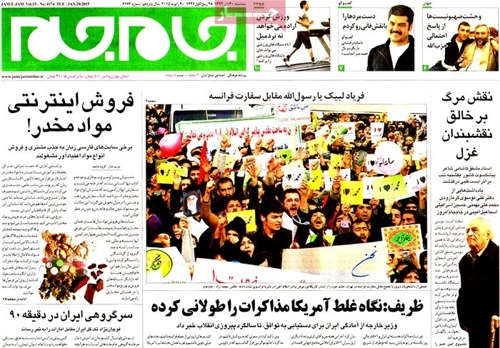 Javan: In a message, the leader of the Lebanese Hezbollah Resistance Movement has warned Israel to “get your shelters ready”. 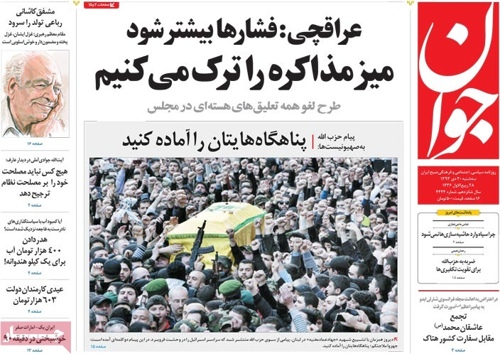 Kayhan: What bothers people is multiple price hikes, not cutting out the cash subsidies handed out to high-income individuals. 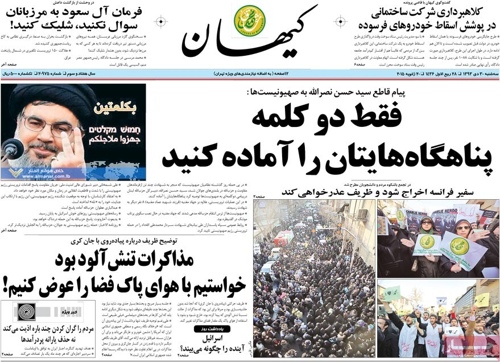 Mardomsalari: “Driving a wedge between people is the historical plot of colonial powers,” said Chairman of the Expediency Council Akbar Hashemi Rafsanjani. 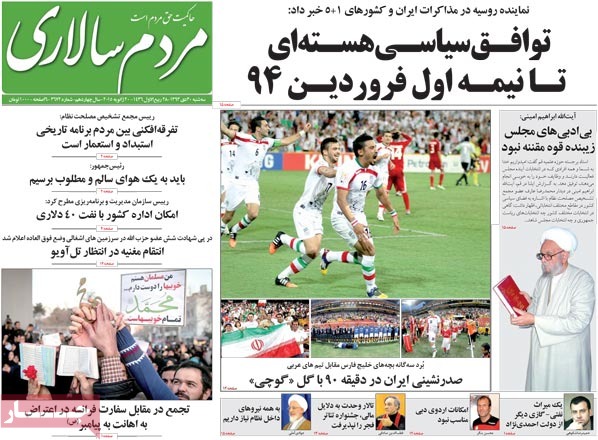 Resalat: “Iran and Russia have inked an agreement for the construction of two more nuclear power plants,” said Director of the Atomic Energy Organization of Iran Ali Akbar Salehi. 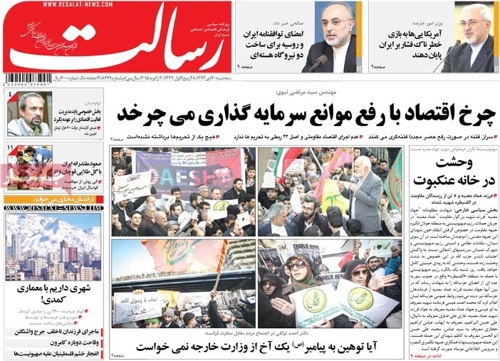