A look at Iranian newspaper front pages on Jan. 11

A meeting between the Supreme Leader and visiting Venezuelan President Nicolas Maduro dominated the front pages of the Iranian newspapers on Sunday. In the meeting Ayatollah Khamenei slammed the recent decline in oil prices as politically-motivated. The comments of President Rouhani at a meeting with his Venezuelan counterpart also drew front-page attention. The upcoming sale of the capital’s two most popular football clubs – Persepolis and Esteghlal – was on the cover of dailies too.

Afarinesh: “Half-finished projects are to be handed over to the private sector,” said a member of a parliamentary committee dealing with budgetary issues. 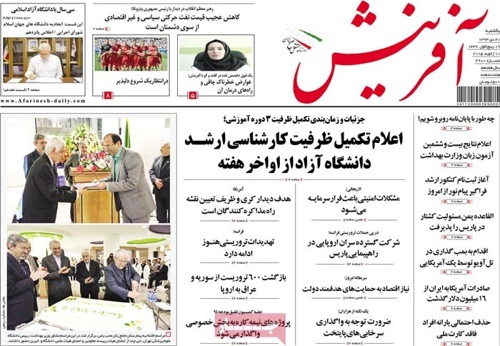 Afkar: Officials with the Supreme Leader’s office have inspected the country’s nuclear facilities.

Afkar: Austrian exports to Iran have registered a 15 percent hike. 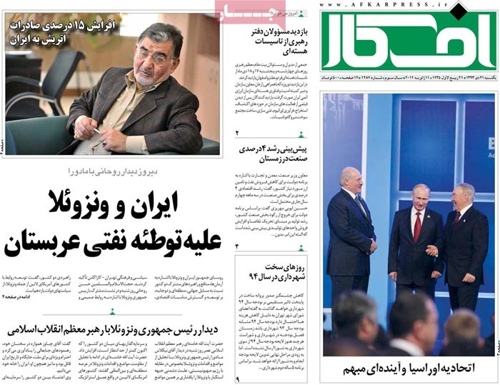 Aftab-e Yazd: China has overtaken the UAE as the biggest exporter to Iran.

Aftab-e Yazd: “Our dignity does not hinge on economic issues,” said the commander of the Islamic Revolution Guard Corps. 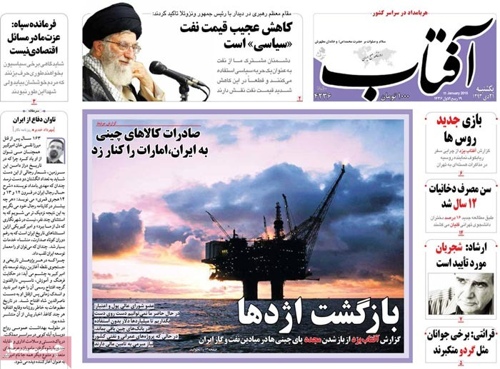 Arman-e Emrooz: Laborers gathered together outside parliament in protest at an amendment to the Labor Law. 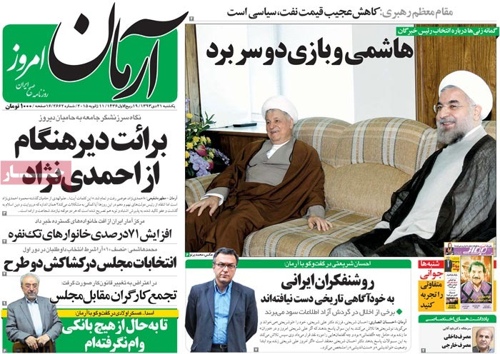 Ebtekar: Cancer is to blame for 15 percent of all Iranian deaths. 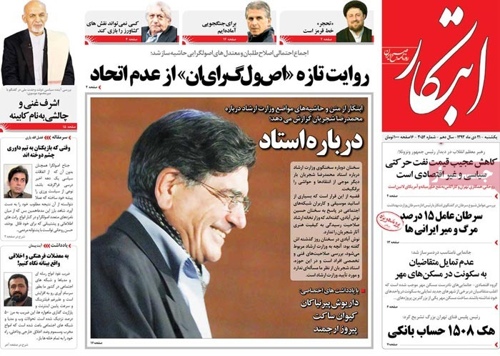 Eghtesad-e Pooya: Exports of Iranian hand-woven carpets are up by 24 percent. 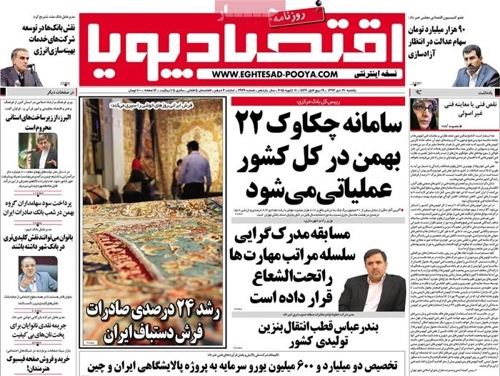 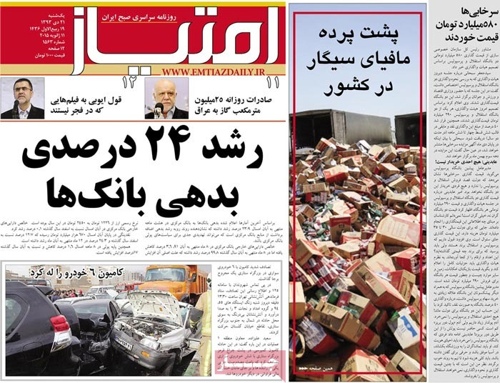 Etemad: At a meeting with the visiting Venezuelan president, the Supreme Leader underlined concerted efforts to counter [a recent] drop in oil prices. 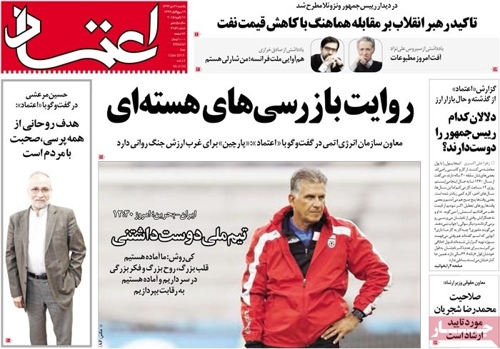 Ettela’at: Persepolis and Esteghlal, two Tehran-based football clubs whose popularity goes beyond the borders of the capital, will be sold to the highest bidders in less than two months.

Ettela’at: “The Health Ministry cannot prop out the healthcare system on its own,” said Health Minister Hassan Hashemi. 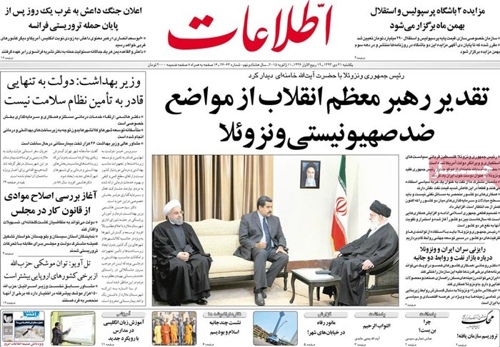 Hambastegi: “Mohammad Reza Shajarian [an internationally-acclaimed vocalist] has the approval of the Ministry of Culture and Islamic Guidance,” said a deputy culture minister. 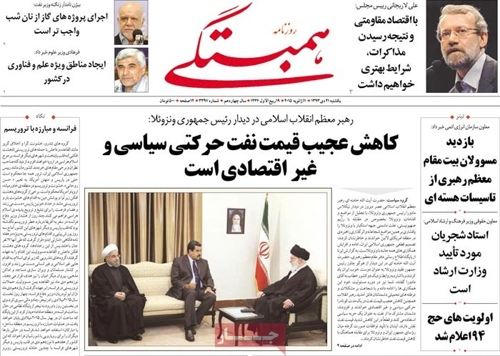 Hemayat: Terrorists are now haunting the very same countries that supported them in the past. 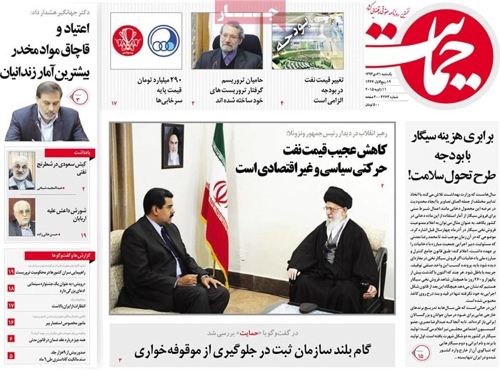 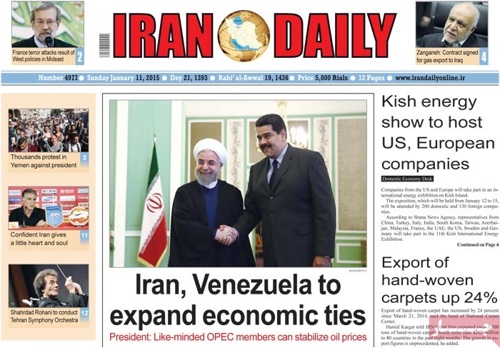 Javan: Homa, a state-of-the-art Iranian RQ-7 drone, has taken to the sky. 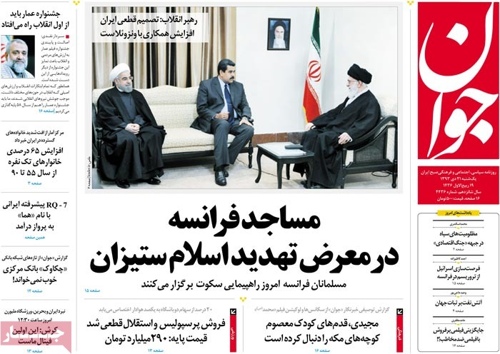 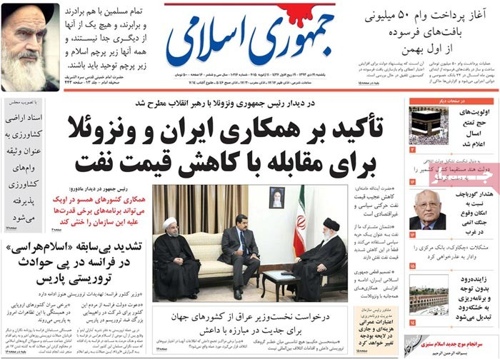 Kaenat: “Iran will not tolerate terrorists,” said the speaker of the Islamic Consultative Assembly. 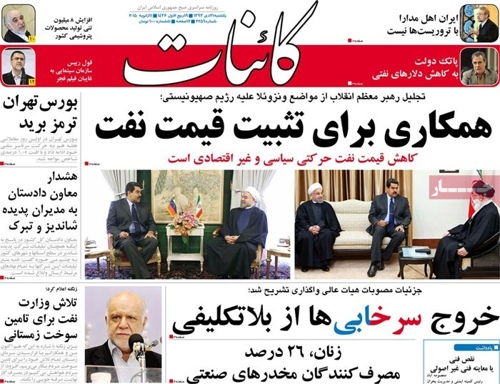 Mardom-e Emrooz: US Secretary of State John Kerry has met with Sultan Qaboos bin Said of Oman ahead of a meeting with his Iranian counterpart Mohammad Javad Zarif. 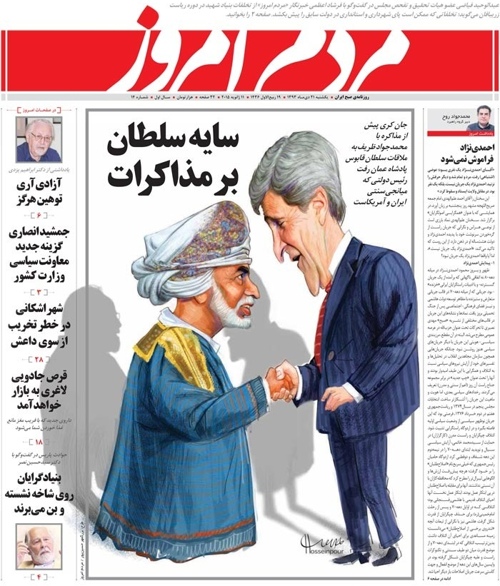 Sepid: A ceremony to celebrate the universality of health insurance in Iran will be held on January 12. President Rouhani will be in attendance. 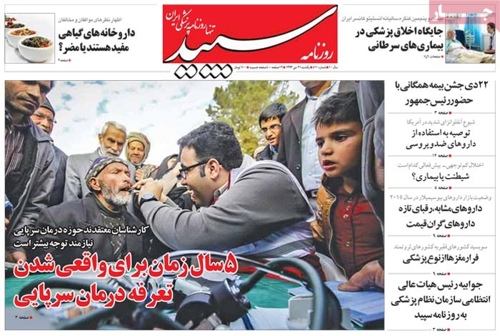 Shahrvand: Officials with the Iranian water and wastewater organization have urged the public to pray for rain. 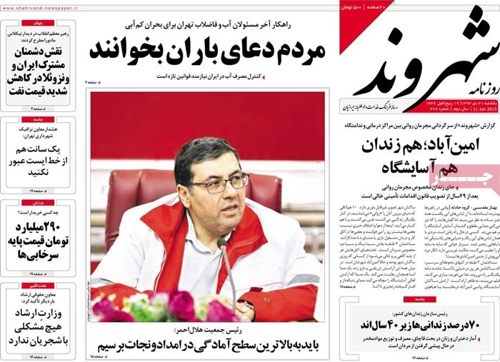 Sharq: Iranian police have arrested a man who hacked into as many as 1,508 bank accounts. 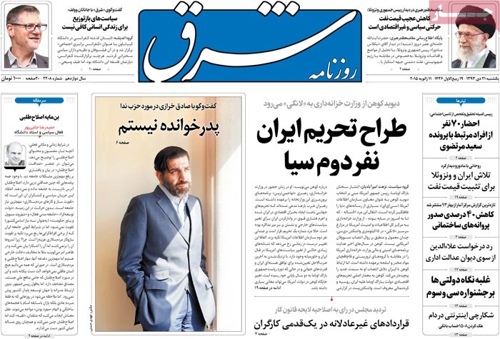