A look at Iranian newspaper front pages on Feb. 9

The Supreme Leader’s expression of support for a nuclear deal that would guarantee the dignity and progress of the Iranian nation and lift all sanctions “in the real sense of the word,” dominated the front pages of Iranian newspapers Monday. Foreign Minister Mohammad Javad Zarif’s comments that failure to clinch a nuclear deal “wouldn’t be the end of the world” along with President Rouhani’s reaction to critics of his nuclear policy also appeared on the covers of dailies.

Abrar: “Failure of nuclear talks wouldn’t be the end of the world,” the Iranian FM said.

Abrar: The impeachment of [Minister of Roads and Urban Development Abbas] Akhoundi has been set in motion. 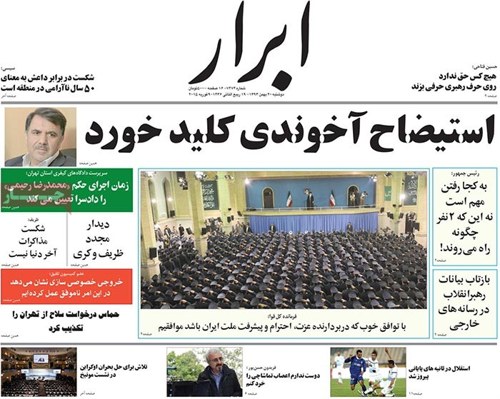 Abrar-e Eghtesadi: Trade exchanges between Iran and Italy will rise. 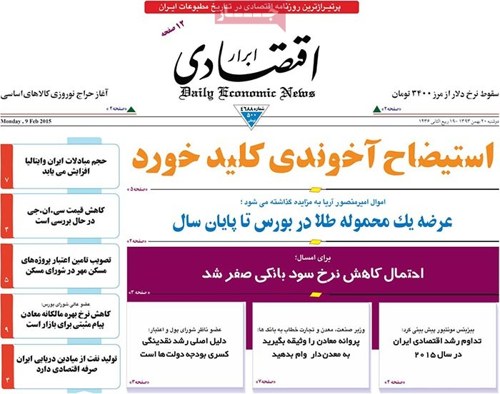 Afarinesh: A dust cloud has forced the closedown of schools and government offices in Khuzestan Province. 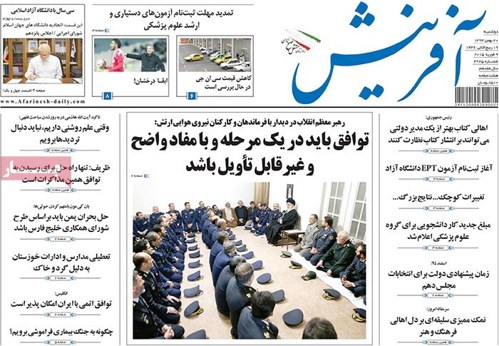 Afkar: A second phase of the war to sell oil cheap has gotten underway. 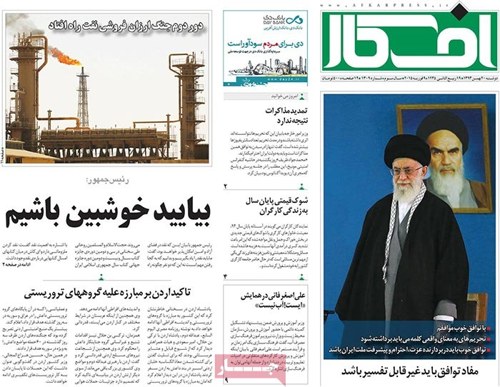 Aftab-e Yazd: “Learn how to be a real critic,” the president told those critical of his government’s nuclear policy. 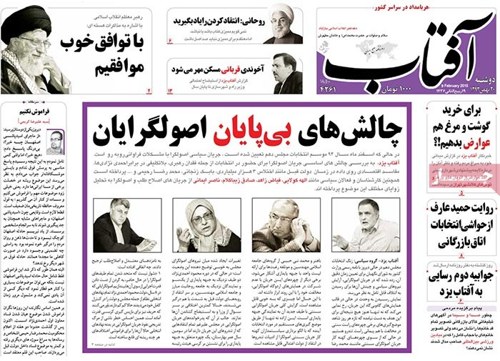 Arman-e Emrooz: “I would approve of a good deal,” said the Supreme Leader.

President Rouhani made the comment in reaction to principlists who have been coming down on his foreign minister for taking a walk with US Secretary of State John Kerry on the streets of Geneva last month. 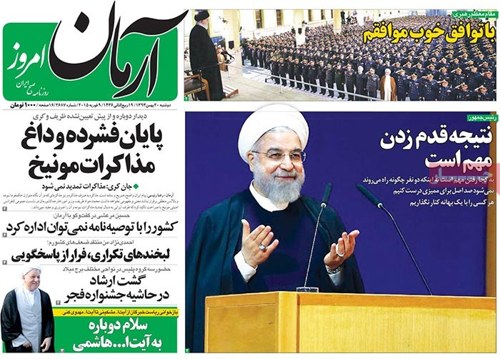 Asrar: Copayment of individuals with Social Security insurance is to drop to zero. 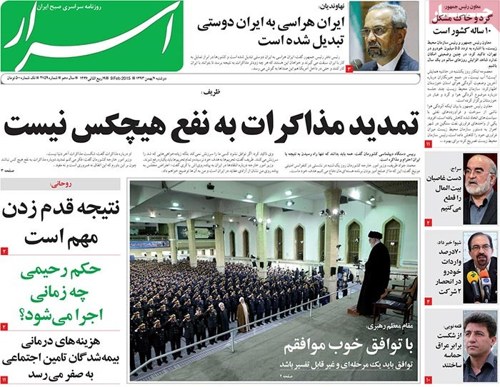 Ettela’at: “We aim to have all sanctions removed,” said Foreign Minister Zarif. 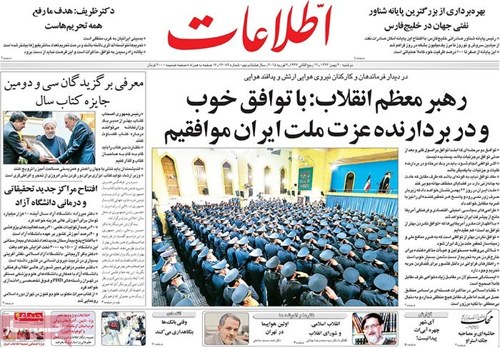 Iran: “We should not sideline the elite under one pretext or another,” said President Rouhani. 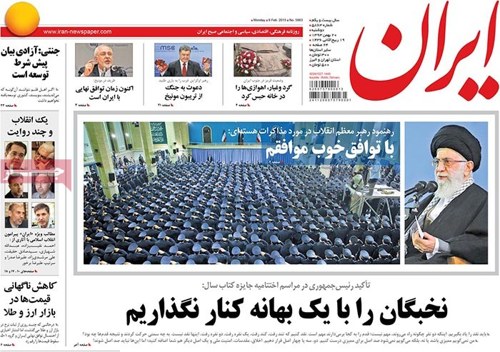 Jomhouri Islami: “By acting wisely, we can achieve all goals of the revolution,” said Ayatollah Hashemi Rafsanjani. 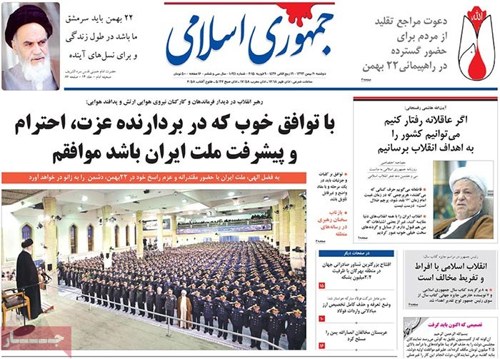 Kaenat: Some 26 percent of addicts use psychedelic drugs. 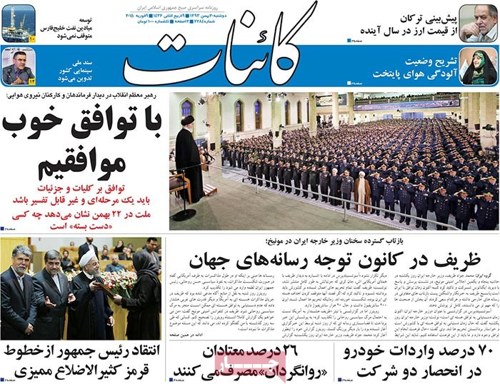 Kayhan: “Sanctions should be lifted in the real sense of the word,’ said the Supreme Leader. 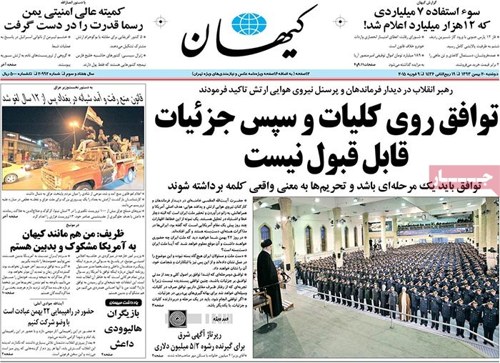 Resalat: “A nuclear deal should be transparent and come in one single stage,” said the Supreme Leader. 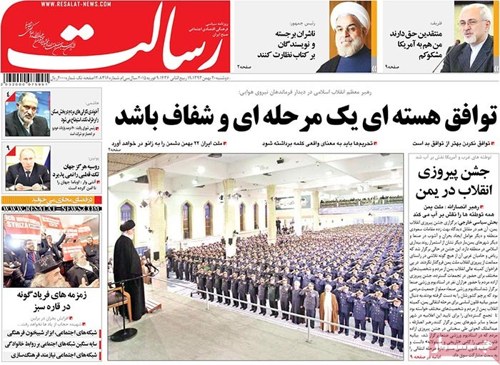 Tafahom: The likelihood of a drop in interest rates in Iran [this year] has fallen to zero. 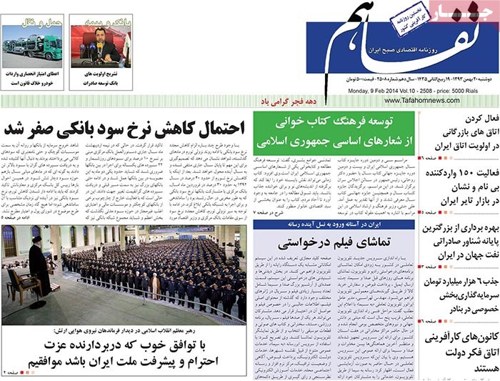 Tejarat: “In 2015 Iranian economy will grow and inflation will decline,” predicted Business Monitor. 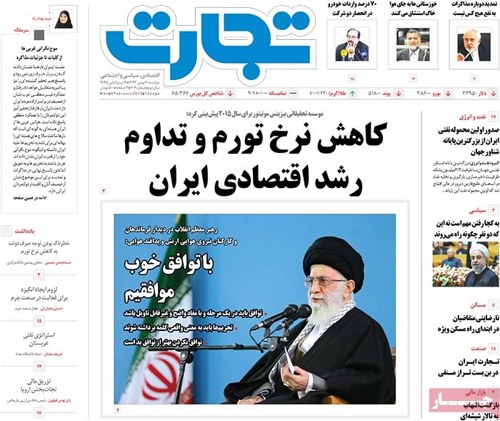