A look at Iranian newspaper front pages on Feb. 2

The aftermath of allegations by Former First Vice-President Mohammad Reza Rahimi that he has contributed $400,000 to the campaigns of 170 parliamentary candidates dominated the front pages of Iranian dailies Monday. The spokesman of the Guardian Council has said if those allegations are substantiated, the council will consider them in the vetting process of upcoming elections. Also on the cover of newspapers were the comments of the parliament speaker who blamed the US president for the potential failure of nuclear talks between Iran and P5+1. “Because of internal problems, President Obama cannot make a wise decision in response to the logical stance of the Iranians,” Larijani said.

Afarinesh: The 33rd edition of Fajr International Film Festival has officially opened in Tehran with a number of top actors and directors in attendance. 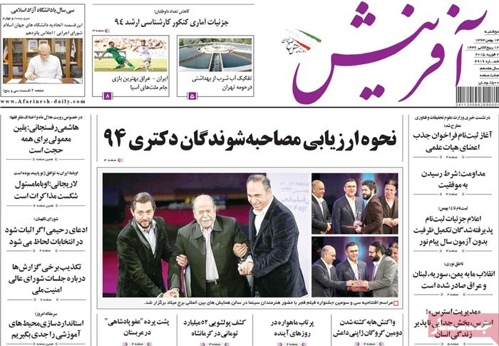 Afkar: School bells across the nation were sounded on Sunday to mark the moment the founding father of the Islamic Republic returned home 36 years ago. 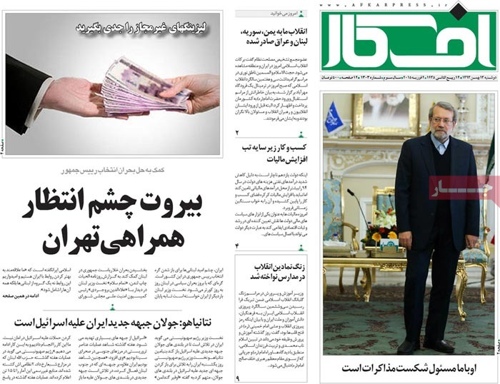 Aftab-e Yazd: “The property Babak Zanjani [who is expected to stand trial shortly for massive corruption] owns covers less than 30 percent of his debts,” announced the Ministry of Oil. 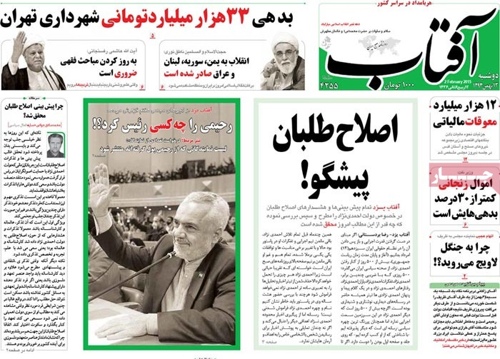 Arman-e Emrooz: Twenty parliament deputies have called for the list of MPs who have allegedly received money from a convicted former vice president to be made public. 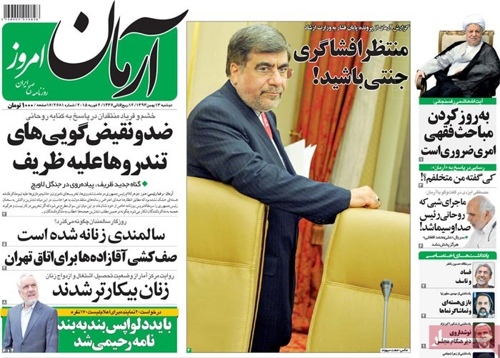 Asr-e Iranian: A number of MPs have taken a swipe at the government for its reluctance to cut the cash subsidies of high-income individuals. 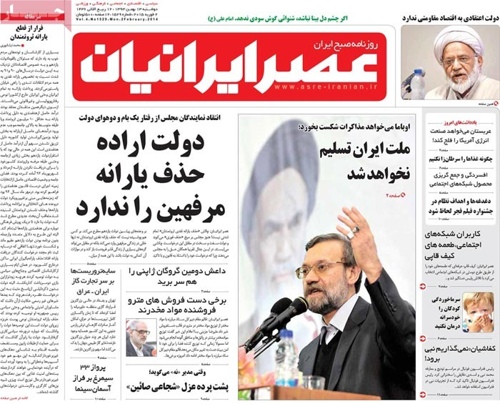 Asr-e Rasaneh: “In the first 10 months of the year, the government’s tax revenues have posted a 52 percent rise over last year,” said the director of the State Taxation Organization.

Asr-e Rasaneh: The Cultural Heritage Organization is working with other state institutions to have the country’s cultural items returned home. 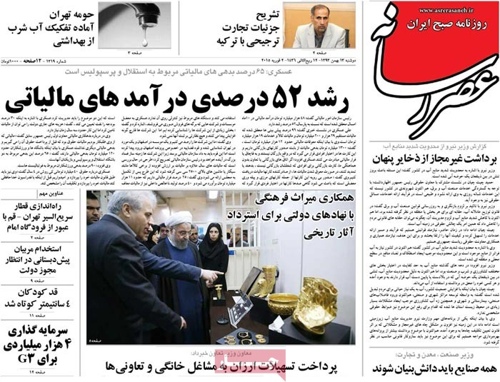 Asrar: “Even at the height of the revolution, Imam would not resort to violence and extremism,” said the minister of roads and urban development. 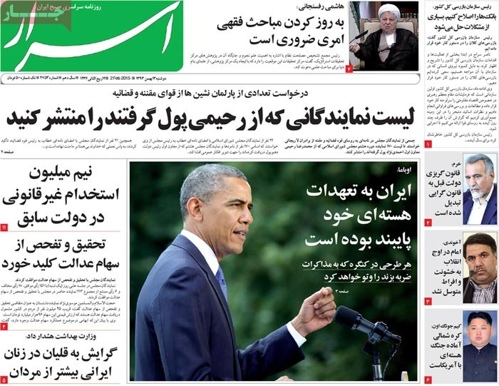 Ebtekar: “The seventh parliament is to blame for the designation of Mohammad Reza Rahimi as the head of the Supreme Audit Court [before he was named first vice-president by Ahmadinejad],” said Mohammad Khoshchehreh, an economist and politician. 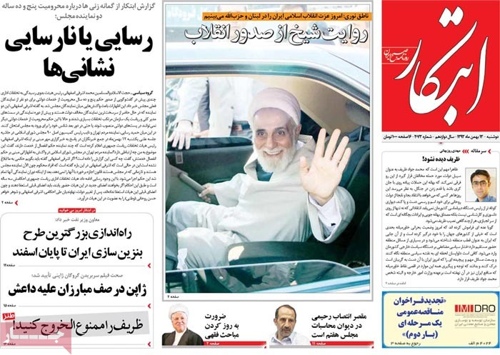 Eghtesad-e Pooya: The director of the Atomic Energy Organization has signaled Iran’s readiness to set up a nuclear power plant safety convention in the region. 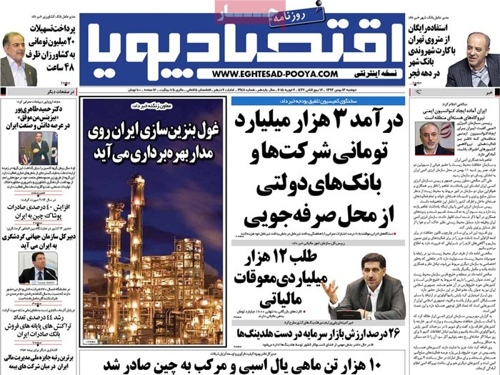 Emtiaz: A ceremony will be held to celebrate the 80th birthday of renowned actor Ali Nasirian.

Emtiaz: Iranian athletes who bagged medals in the Asian Para Games in Incheon 2014 have been praised at a ceremony.

Emtiaz: A large gasoline production project will be launched by the end of the year. 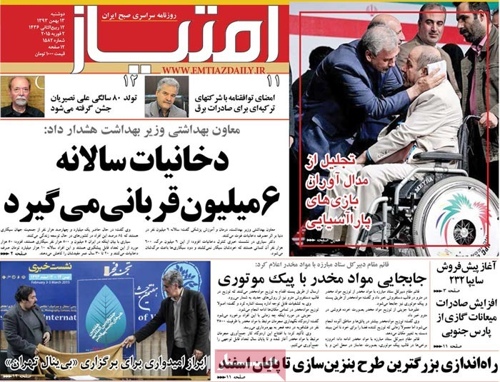 Ettela’at: Parliament has approved a motion under which Astan Qods Razavi, which runs the shrine of Imam Reza in the holy city of Mashhad, and economic institutions affiliated to the armed forces will have to pay taxes. Jomhouri Islami: Some 400 mining projects will be inaugurated across the nation during Ten-Day Dawn [marking the anniversary of the victory of the Islamic Revolution]. 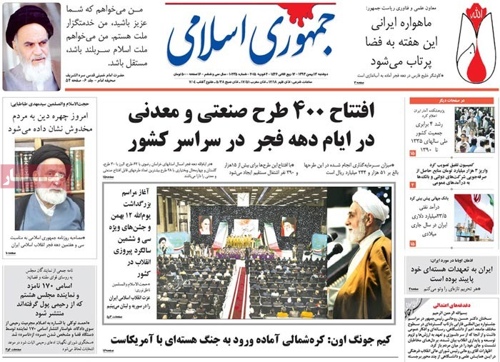 Kaenat: The State Taxation Organization has appealed to the judiciary for help, saying businesses owe it some $4 billion in unpaid taxes. Kar va Kargar: The Iranian deputy foreign minister has met with the Egyptian president on the sidelines of an African summit. Kayhan: The US has once again hailed the Geneva Deal; President Obama has said the world has stopped the nuclear progress of Iran without making any concessions in return. 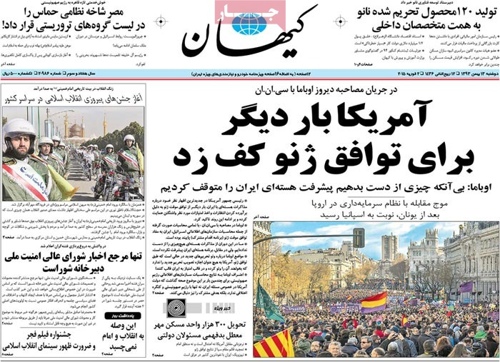 Sayeh: “It is necessary to update issues that have to do with jurisprudence,” said the chairman of the Expediency Council. 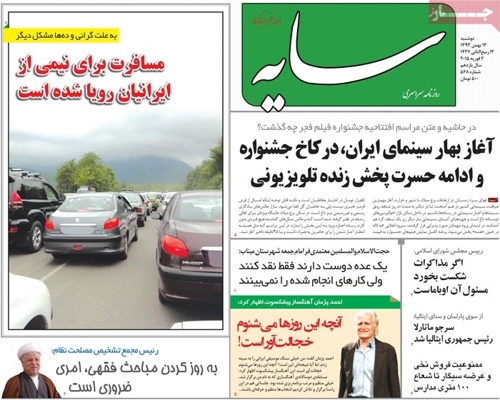 Tejarat: Soccer clubs and players owe more in taxes than any other sport entities. 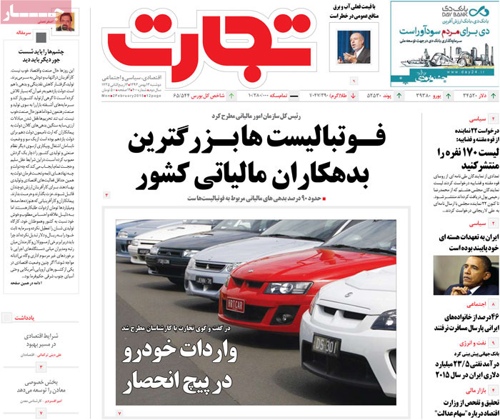