A look at Iranian newspaper front pages on Feb. 17

The comments of the Supreme Leader at a meeting with religious minority MPs dominated the front pages of Iranian newspapers on Tuesday. At the meeting the Supreme Leader said, “Islam has taught the faithful to treat the followers of other religions fairly.” A news conference of the judiciary spokesman in which issues related to former presidents Ahmadinejad and Khatami were brought up also appeared on the covers of dailies.

Abrar: “A ruling in the case of Mehdi Hashemi [a son of Ayatollah Hashemi Rafsanjani] will be issued soon,” said the judiciary spokesman. 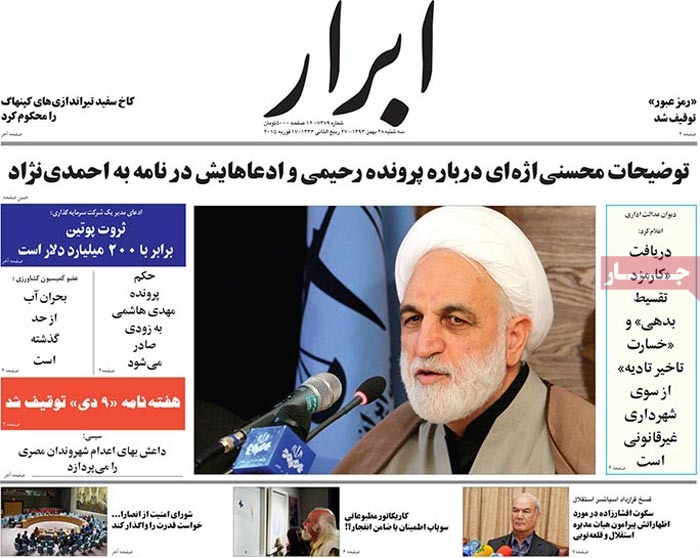 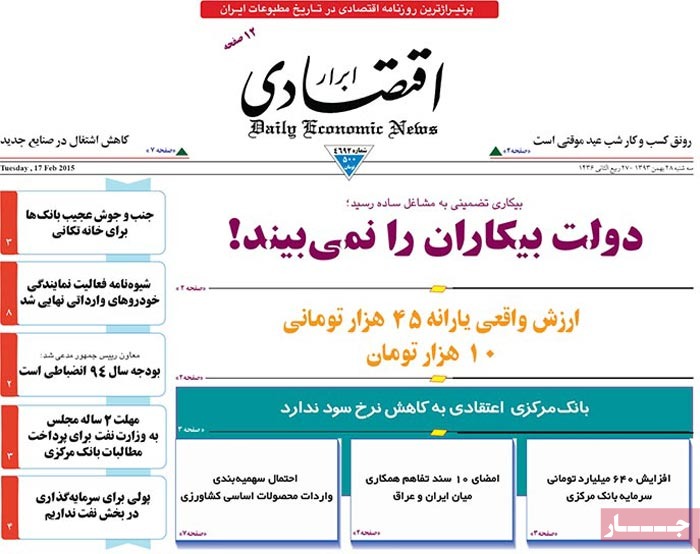 Afkar: “The Oil Ministry won’t have money to invest in the petroleum sector next year,” said the oil minister.

Afkar: “Those who have supported IS are now beset [by the terrorist grouping],” said the Iranian first vice-president on a visit to Iraq. 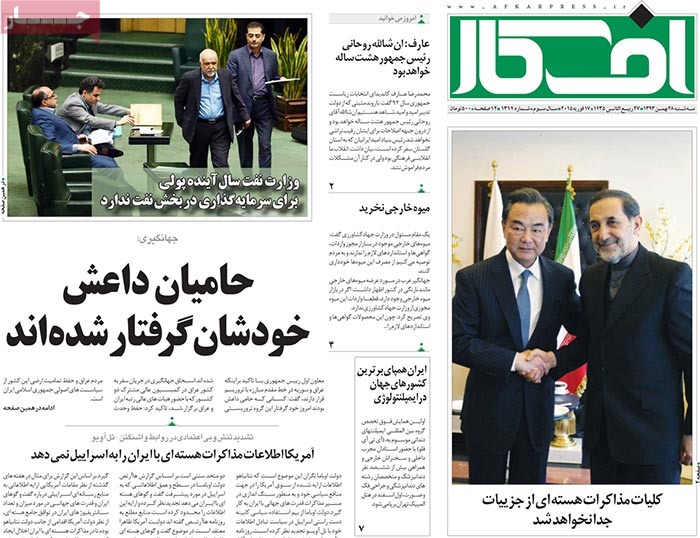 Arman-e Emrooz: “In Iran aggression toward non-Muslims is unprecedented,” said the Supreme Leader.

Arman-e Emrooz: “Five judges have been found incompetent to sit on the bench,” said the judiciary spokesman. 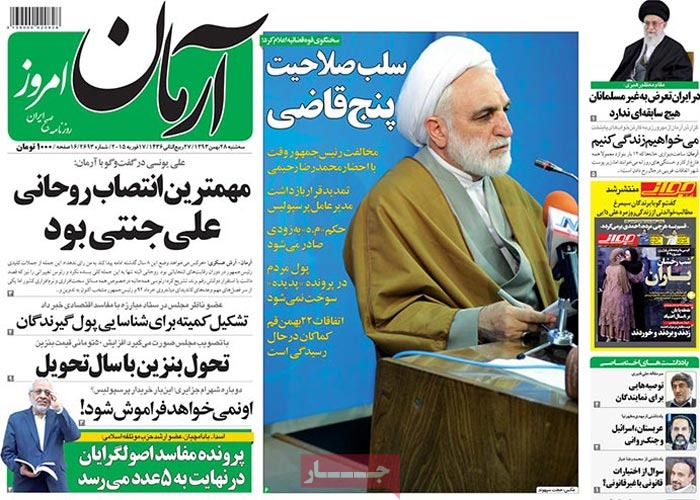 Ebtekar: Gasoline prices will increase five percent as of next year [starts March 21, 2015]. 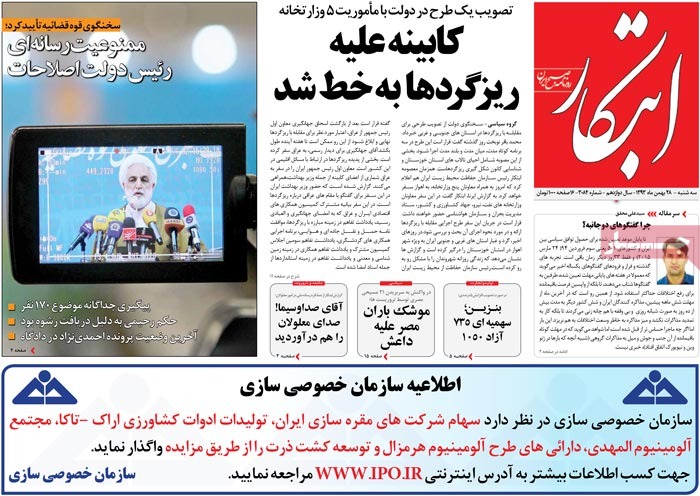 Etemad: In a press conference the judiciary spokesman has talked about legal cases and bans.

“[Former First Vice-President Mohammad Reza] Rahimi was convicted of bribery; the case involving former President Mahmoud Ahmadinejad is under investigation. Media are not allowed to release news on former President [Mohammad Khatami]. A verdict in the case of Mehdi Hashemi will be issued shortly. Five judges have been disbarred,” Gholamhossein Mohseni Ejei said.

Etemad: “Because of the social policies of the previous government, the number of families who live below the poverty line tripled,” said a former welfare minister. 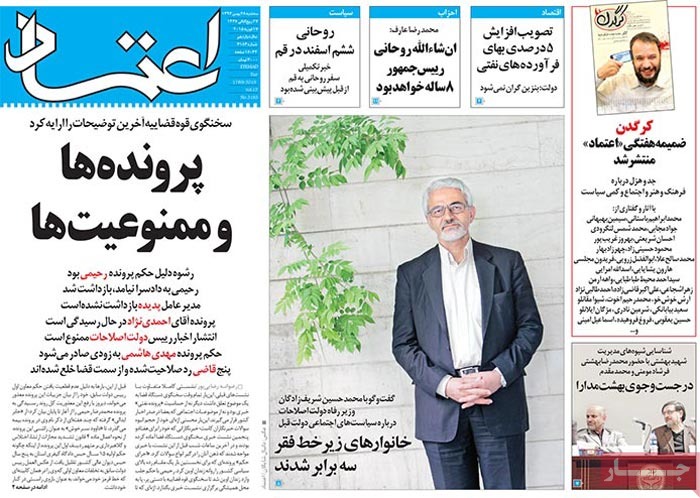 Ettela’at: “The world has to live with the Iranian nuclear progress,” said the director of the Atomic Energy Organization.

“We have found ways to ease the groundless concerns of the West. At the same time these solutions guarantee the nuclear rights of the Iranians. Nuclear talks are close to their final stages. During the negotiations the West has found out that continued pressures, including sanctions, won’t work in dealing with Iran. In less than two months a few new achievements of the nuclear industry will be unveiled,” said Ali Akbar Salehi in an exclusive interview with the daily.

Ettela’at: “The sufferings of the people should not be used for political gains,” said the director of the Environment Protection Organization (EPO).

Masoumeh Ebtekar further said her agency is not involved in factional politics and that several EPO experts working to ease the harmful effects of dust storms come from a faction that does not see eye to eye with the government.

She added the Iraqi government has drawn up a plan to counter the problem of particulates and agreements have been signed to that end with Iran. Because of security reasons, though, those plans cannot be implemented.

Ettela’at: A specialty hospital is to be built in Qom for the clergymen.

Ettela’at: A ceremony has been held at the Association for the Appreciation of Cultural Works and Dignitaries to honor the memory of former First Vice-President Hassan Habibi. 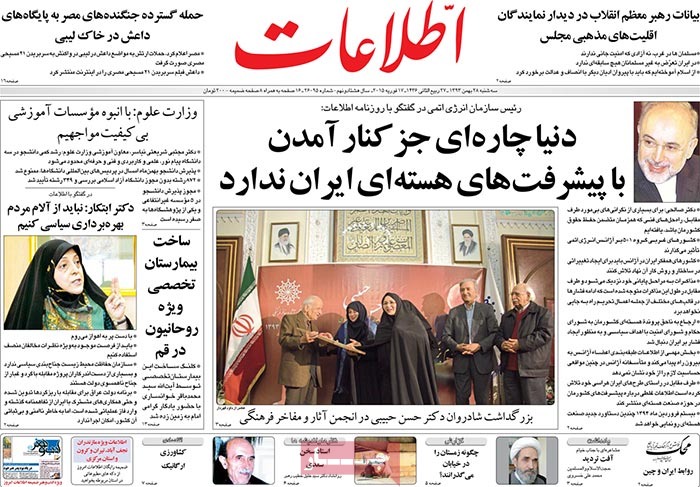 Hemayat: “Muslims in Europe and America are not safe,” said the Supreme Leader at a meeting with MPs representing religious minorities in parliament. 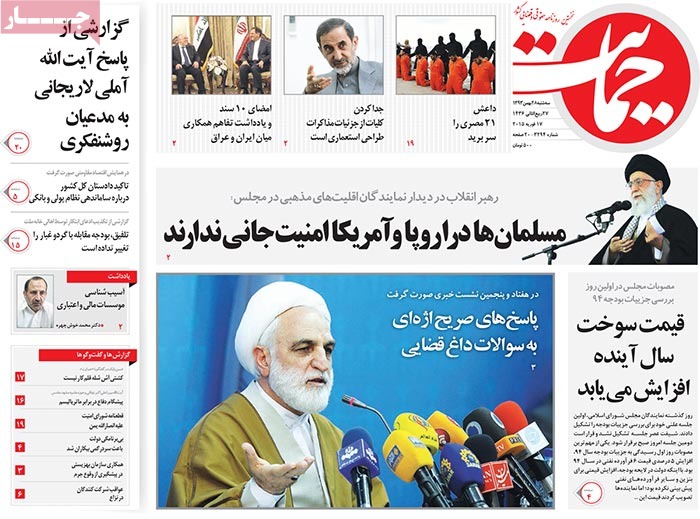 Iran: Eight members of the Rouhani Cabinet are in Baghdad to talk trade and find a way to tackle the problem of particulates [crippling several towns in southwestern Iran]. 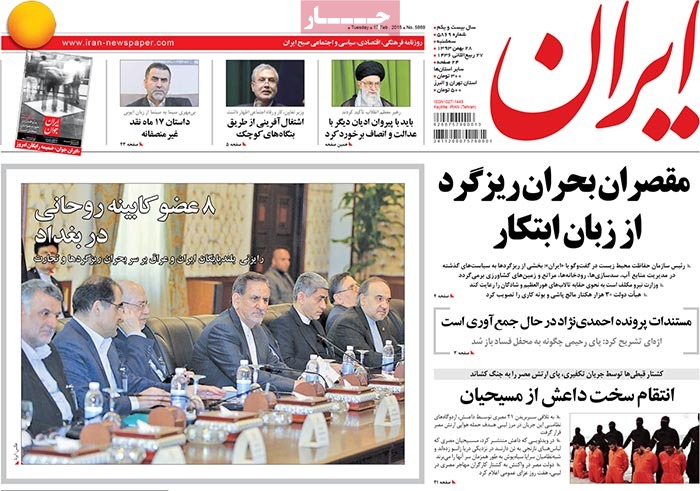 Jomhouri Islami: The executive director of UNODC has said Iran has been the most successful country in the fight against drugs. 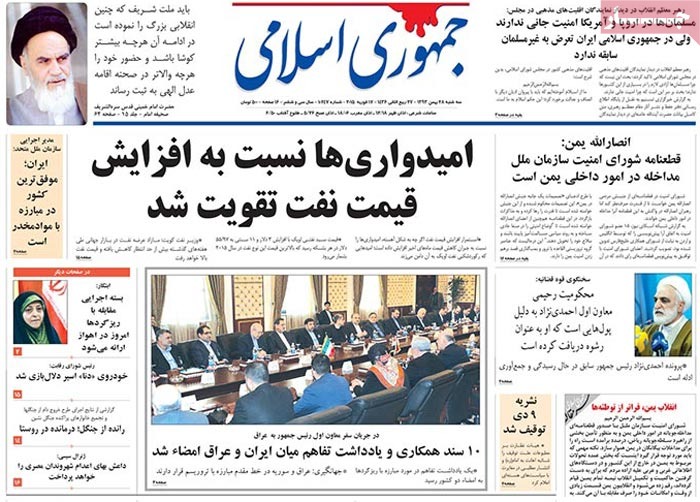 Kayhan: “The volume of trade between Iran and China is to hit $200 billion,” said the Chinese foreign minister at a meeting with an adviser to the Supreme Leader.

Kayhan: Following the publication of an exposé by Kayhan, a planned New Year Antalya tour for some of the Education Ministry personnel has been called off. 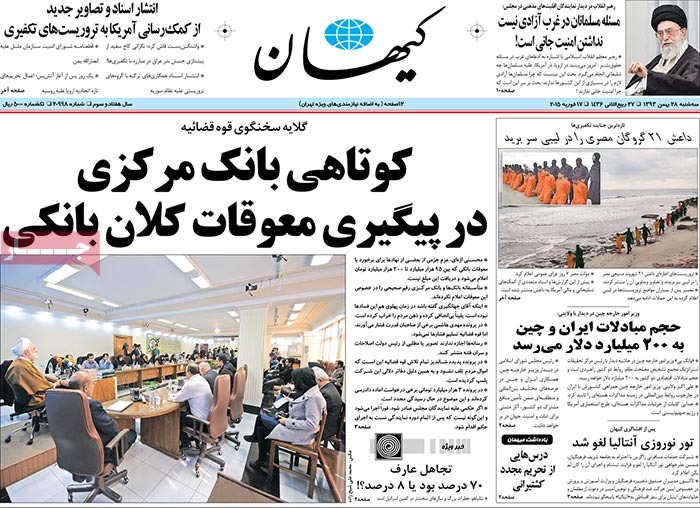 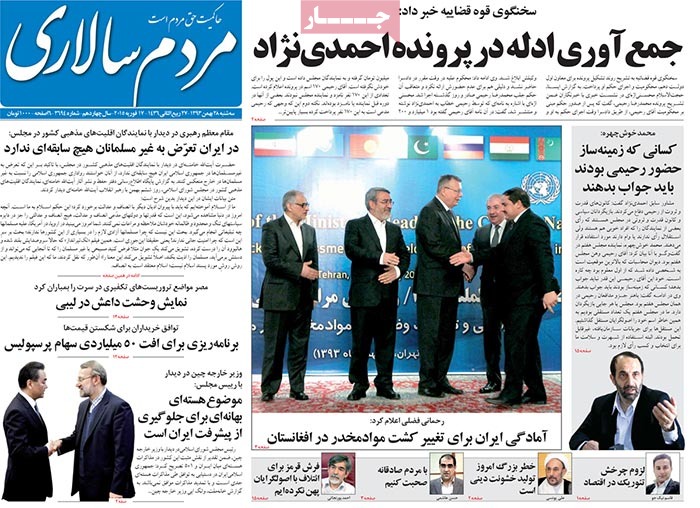 Qods: Iran’s new UN ambassador has said that Tehran will exhaust every avenue to have the sanctions lifted. 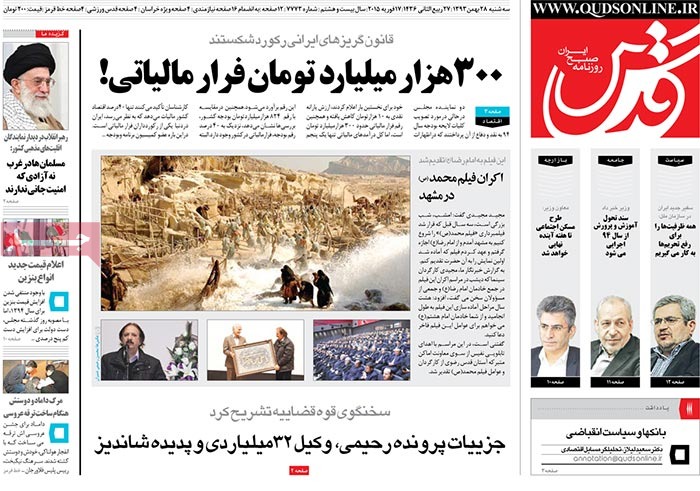 Resalat: “Drawing a line between general outlines and details [of a nuclear deal] is a colonial plot,” said Velayati, an adviser to the Supreme Leader.

Resalat: “Present MPs are not on the list of individuals who have received money from Rahimi [a convicted former VP],” said the judiciary spokesman. 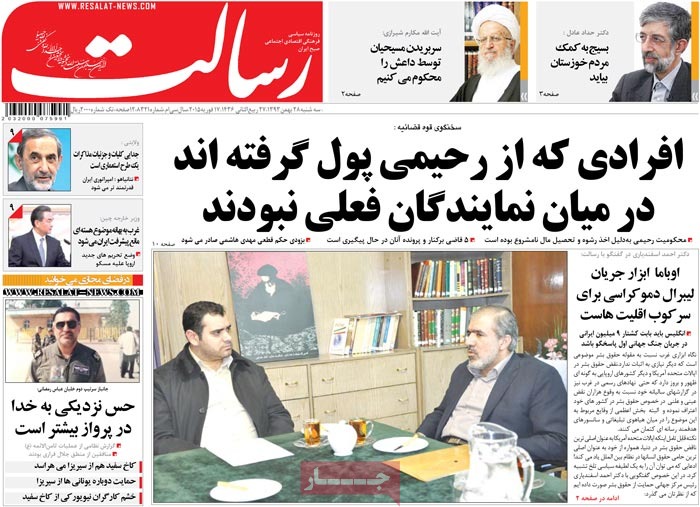 Taadol: Iran and Iraq have signed a deal in Baghdad to settle the problem of particulates. 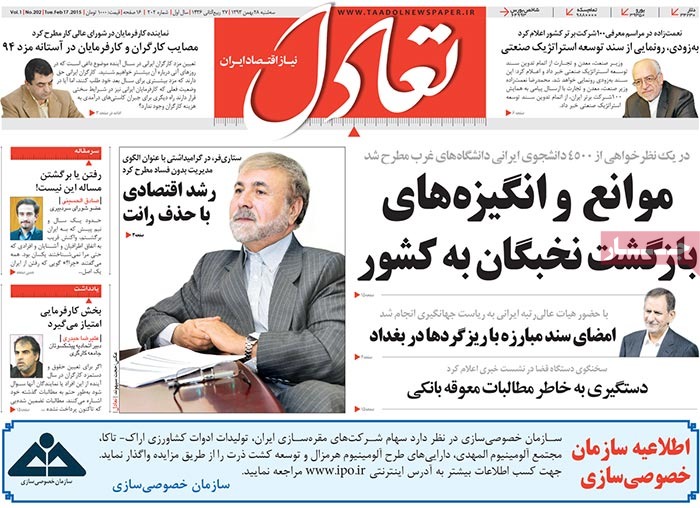