A look at Iranian newspaper front pages on Feb. 16

The imprisonment of former President Mahmoud Ahmadinejad’s deputy for corruption dominated the front pages of Iranian newspapers on Monday. Also in the news were the meetings between the visiting Chinese foreign minister with President Rouhani and Foreign Minister Zarif.

Abrar: “We are working on good defense contracts with Russia,” said the Iranian defense minister. 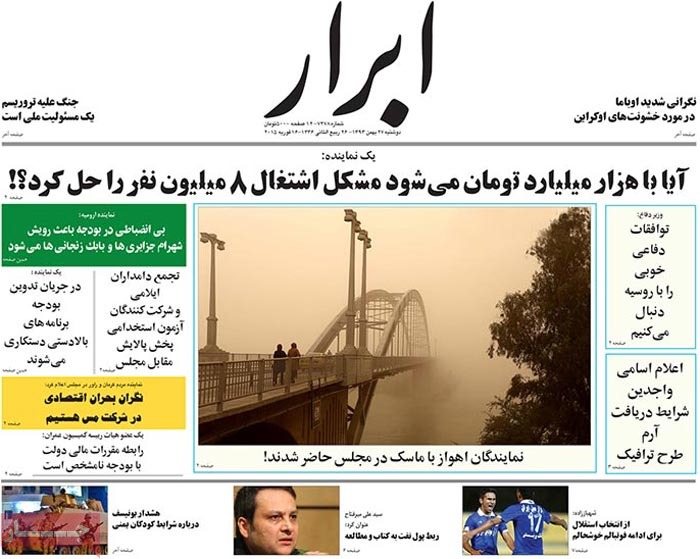 Afarinesh: “Those who sow the seeds of interfaith hatred harvest violence,” the president said in a message.

President Hassan Rouhani released the message in reaction to the killings of three Muslim students in the US state of North Carolina.

Afarinesh: “We are ready to show enough flexibility to win the trust of P5+1,” said Foreign Minister Mohammad Javad Zarif. 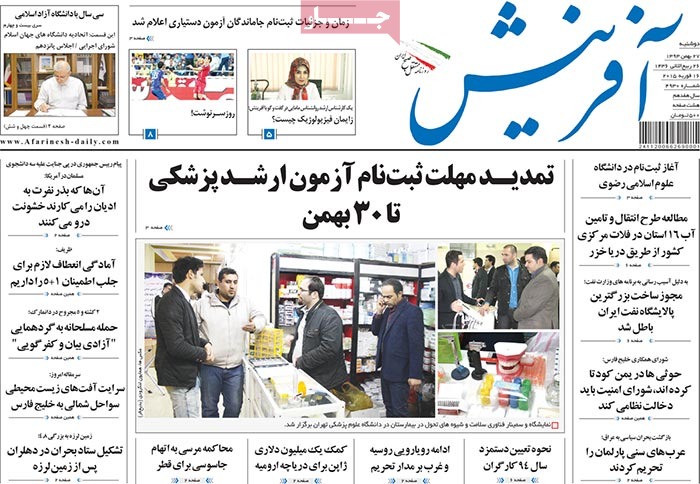 Aftab-e Yazd: Parliament has voted for the general outlines of [next year’s] budget [bill]. 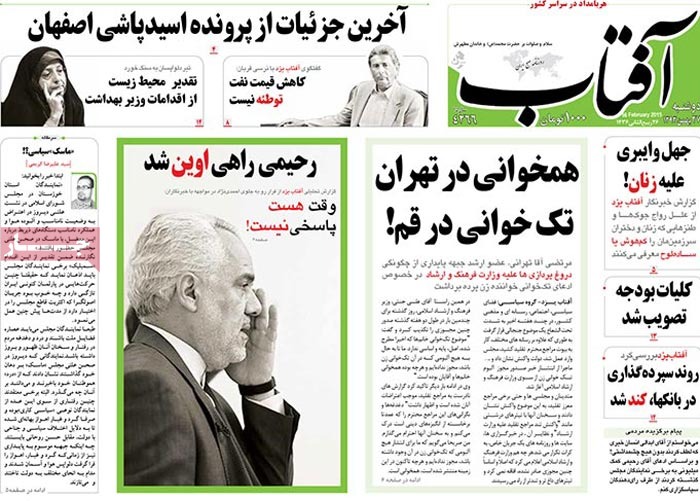 Amin: “If they had allowed Taxi to be screened in Iran, I would have withdrawn it from Berlinale,” said director Jafar Panahi. 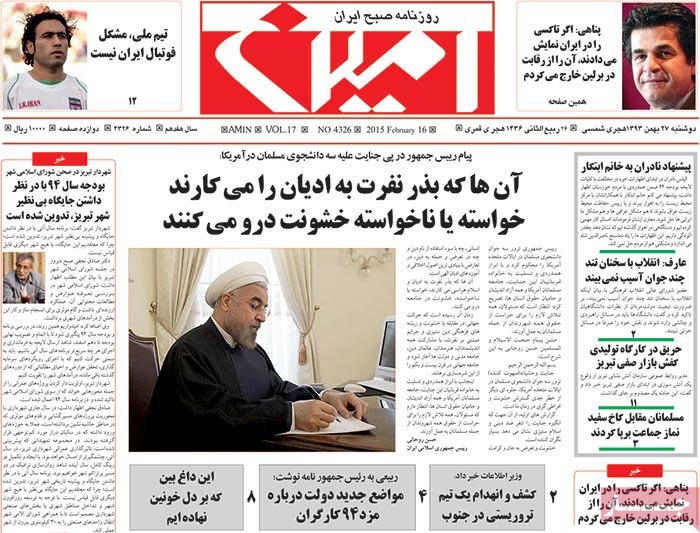 Arman-e Emrooz: He wouldn’t go; they came and took him [to Evin Prison]

Former First Vice-President Mohammad Reza Rahimi has been taken to prison to serve a five-plus-year sentence for corruption. 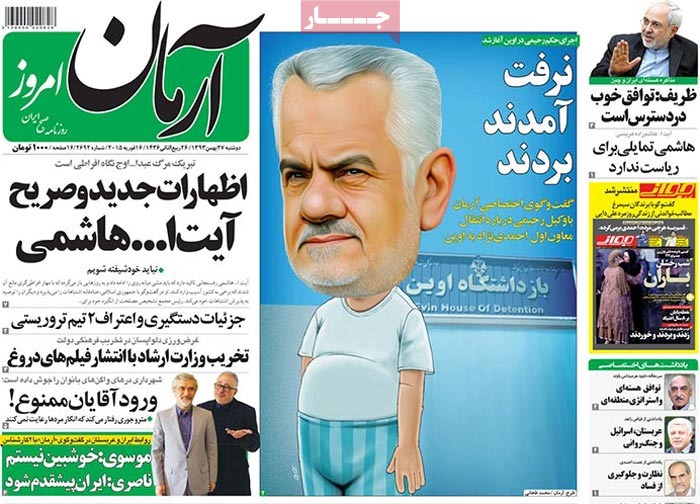 Asrar: Some 50 percent of retirees are below the poverty line.

Parliament is insisting on an increase in the pension of the retirees. 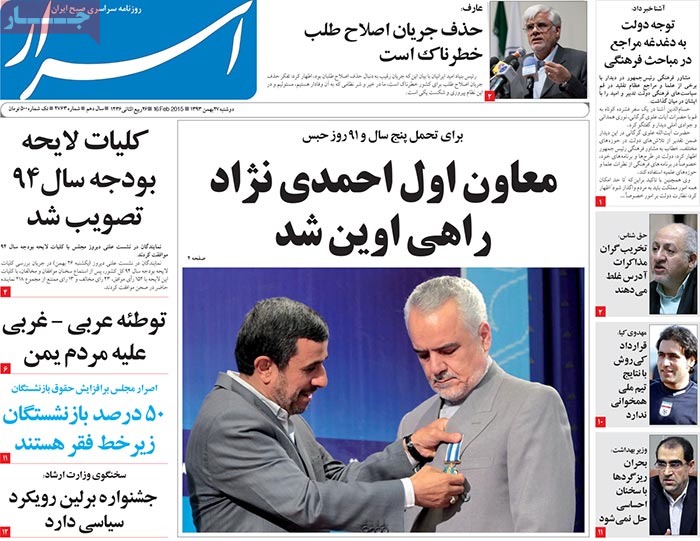 Ebtekar: “In diplomacy, you should ignore the viewpoints of those who do not know much,” said Seyyed Mohammad Sadr, a veteran diplomat.

Ebtekar: Those who worked for Ahmadinejad are now neighbors at Evin [Prison].

A year after the detention of Babak Zanjani [for massive corruption], former Vice-President Mohammad Reza Rahimi has landed in prison too. 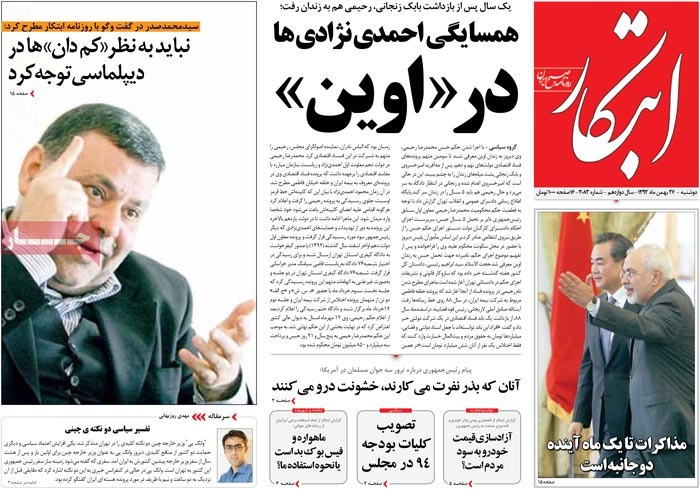 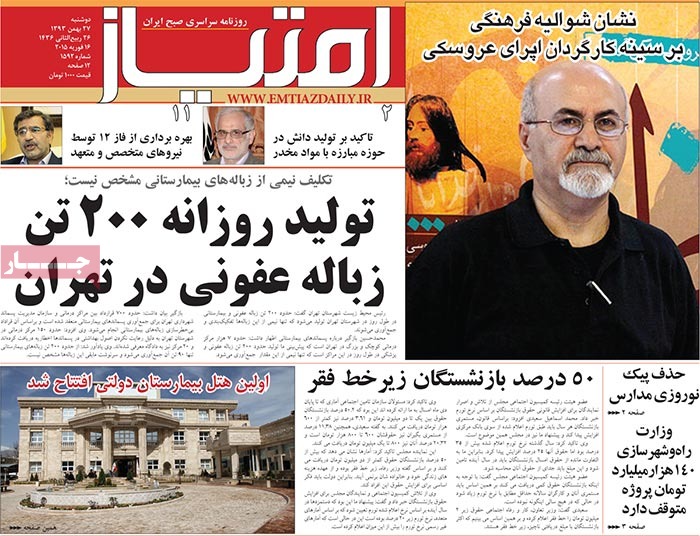 Ettela’at: Over 1,000 new health houses have opened across the country simultaneously. 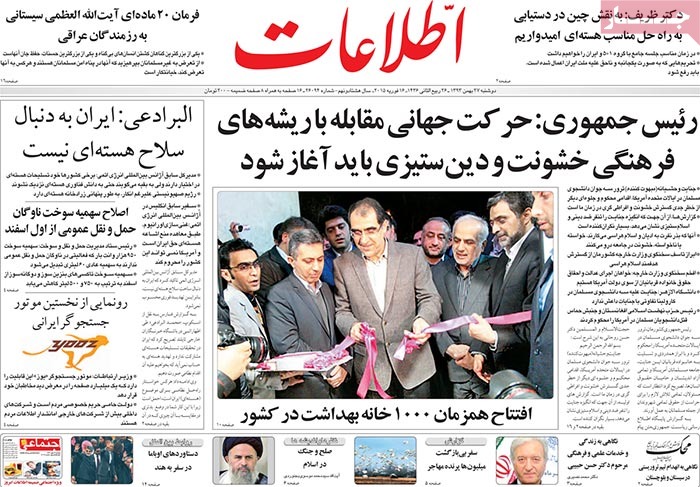 Hemayat: Instead of being accountable in the murder of three Muslim students, the US has thrown its weight behind Iran’s sedition leaders.

The Iranian Foreign Ministry has condemned the meddling of the White House in Iran’s internal affairs. 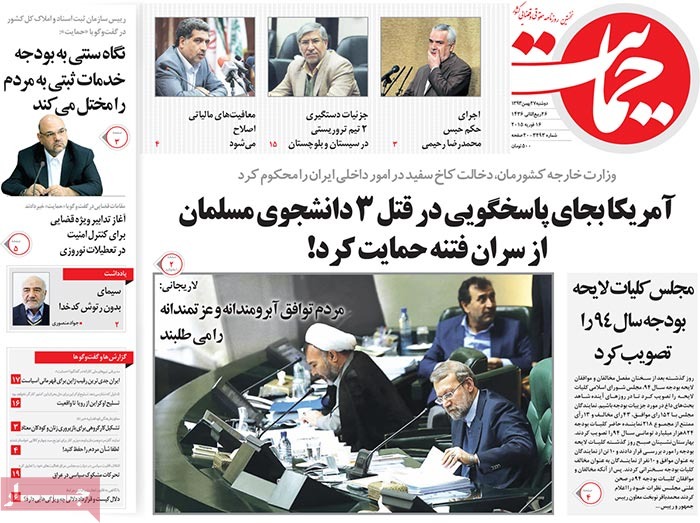 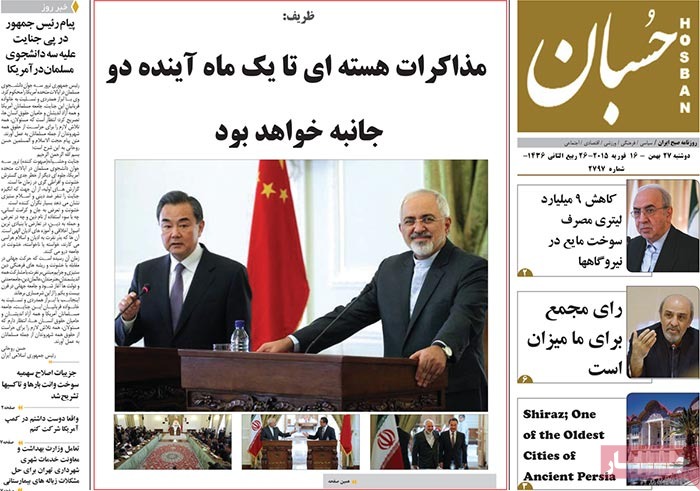 Iran: “Reaching a deal in the near future is possible,” President Rouhani said at a meeting with the Chinese FM.

Iran: A tight race is on between young and veteran musicians at the 30th International Fajr Music Festival. 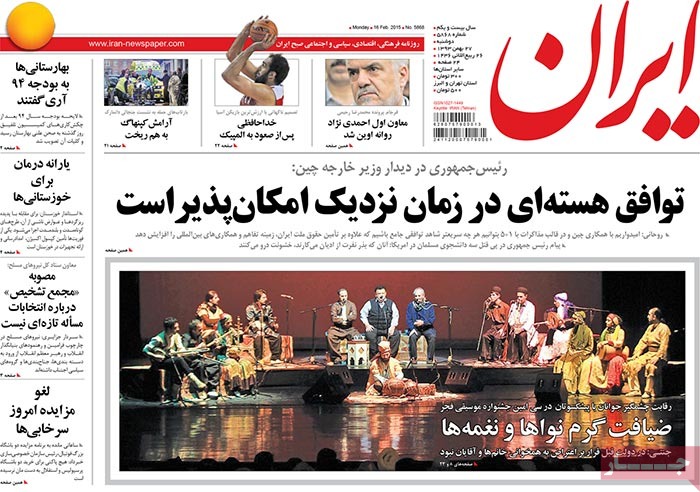 Jomhouri Islami: “Europe can contribute to the conclusion of a comprehensive deal and removal of sanctions,” said Zarif at a meeting with a Norwegian diplomat. 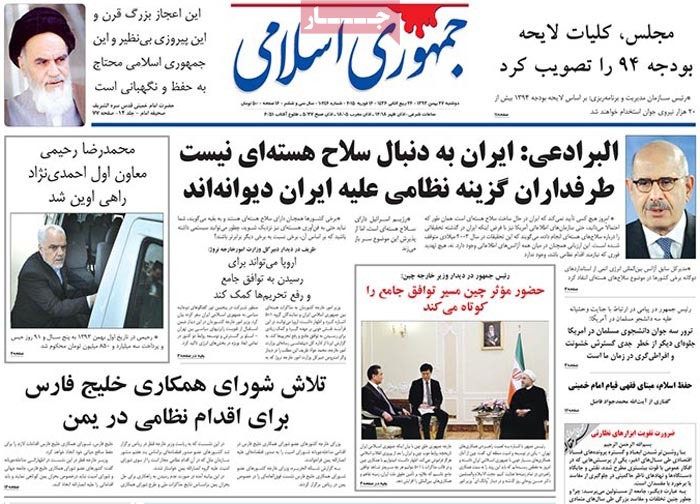 Kar va Kargar: The Iranian Foreign Ministry has denied a Wall Street Journal report that the Supreme Leader has sent Obama a letter. 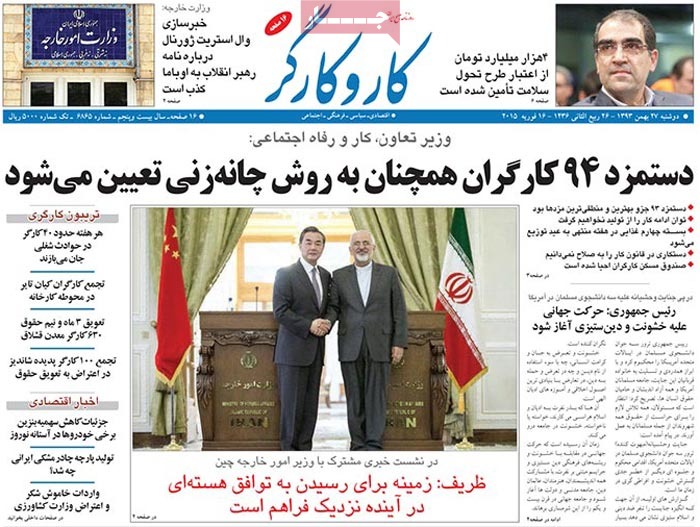 Kayhan: “Two terrorist groups have been busted in Sistan and Baluchestan,” said the deputy governor general of the southeastern Iranian province. 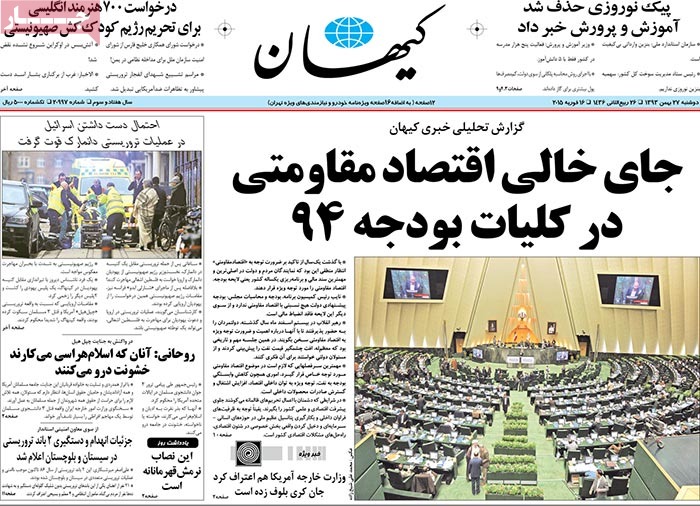 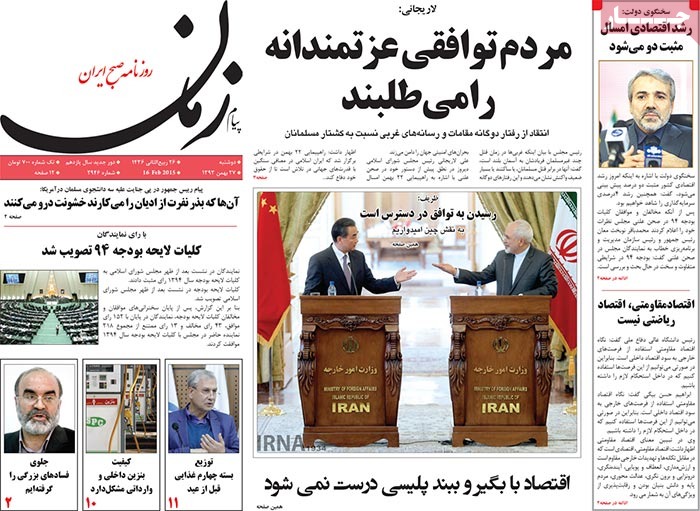 Qods: “The president has ordered the cash subsidies of low-income families to be maintained,” said the minister of cooperatives. 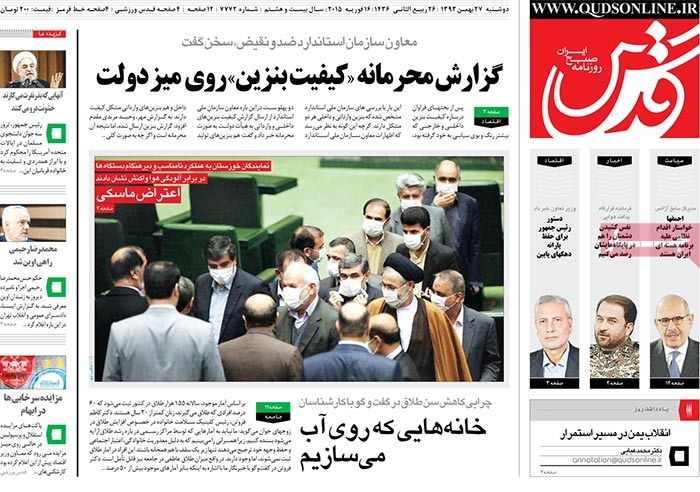 Resalat: The US State Department has called for an end to the house arrest of seditionist leaders. 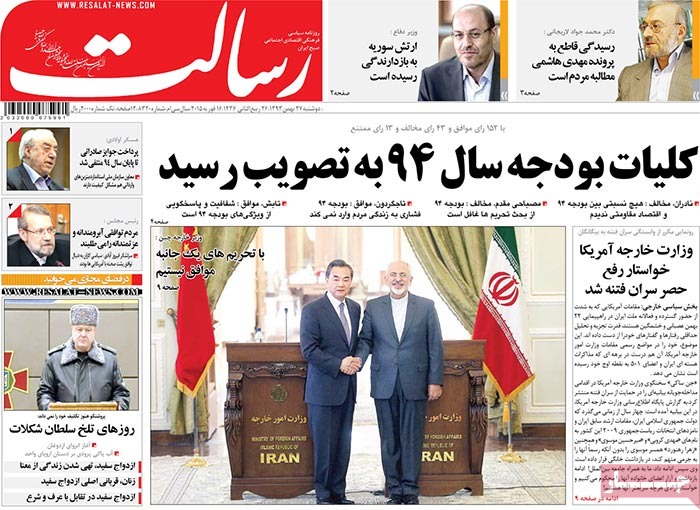 Sayeh: “A package on ways of offsetting the effects of dust storms has been approved,” said the director of the Environment Protection Organization. 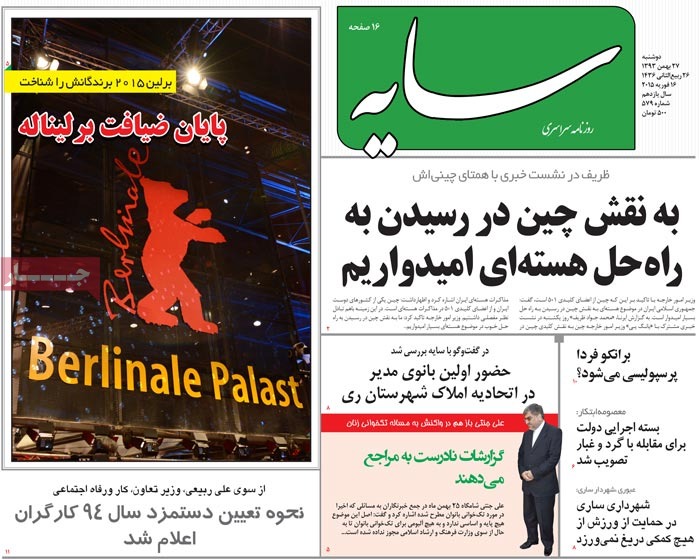 Shahrvand: An Iranian Internet search engine, Yooz.ir, has been launched. 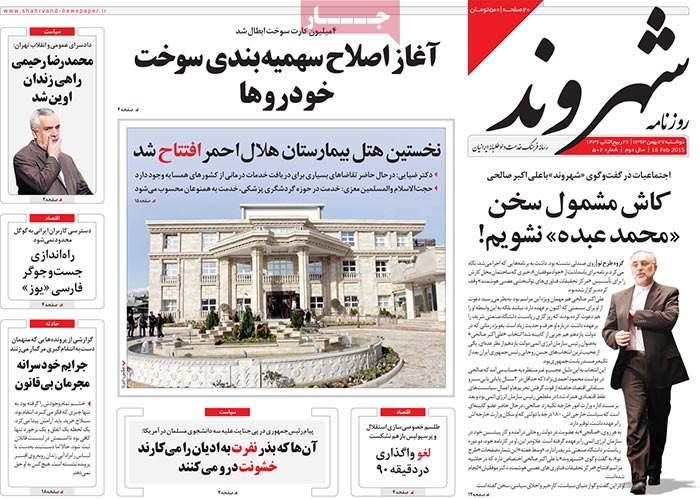 Taadol: “Projects worth around $4 billion remain unfinished,” said the Ministry of Roads and Urban Development. 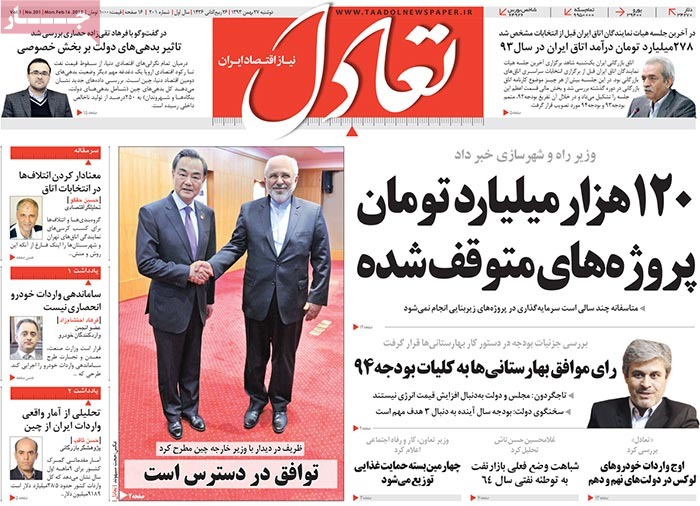