A look at Iranian newspaper front pages on Feb. 12

Almost all Iranian dailies splashed on their front pages images of huge rallies across the nation to mark the victory of the Islamic Revolution 36 years ago.

Reformist newspapers called the rallies a declaration of public support for nuclear talks, but principlist dailies said the Iranians said no to the West. “The nation’s nuclear support”, “Iranians created yet another epic; more revolutionary than before”, “The nation’s fist on the table”, and “The peak of zeal and unity”, were some of the front page headlines on Thursday. Comments by President Rouhani at one such rally in Tehran drew a lot of front-page attention too.

Afarinesh: “None of the establishment’s officials are opposed to a nuclear deal,” said Parliament Speaker Ali Larijani. 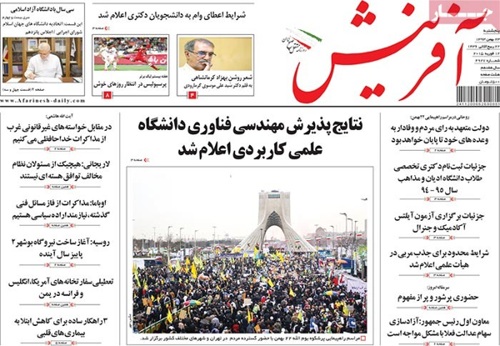 Aftab-e Yazd: “No treason is worse than treason committed behind the scenes,” President Rouhani said.

The president made the comment at a huge rally in Tehran to mark the anniversary of the Islamic Revolution 36 years ago. A statement issued at the end of the rally supported nuclear talks between Iranian officials and P5+1. 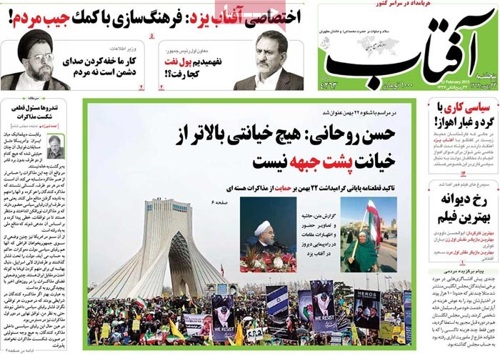 Arman-e Emrooz: We don’t know what happened to petrodollars for five years.

The comment by First Vice-President Eshagh Jahangiri takes aim at the previous administration for its lack of accountability. “Oil sales brought in $118 billion in the 12 months to March 21, 2012 alone.” 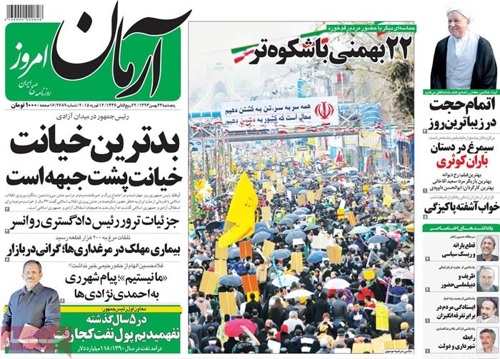 Etemad: “At the talks we have defended Iran’s independence,” said President Rouhani.

The comment came during the president’s speech at a rally in Tehran to mark the anniversary of the Revolution. “In the absence of freedom, Republicanism would be meaningless,” the president also said. 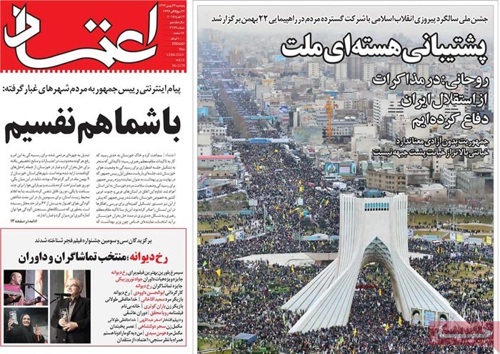 Ettela’at: The Supreme Leader has pardoned or commuted the sentences of some prisoners.

More than 1,000 inmates benefit from the decision made to mark the victory of the revolution.

Ettela’at: A special headquarters has been set up to deal with air pollution in Khuzestan province. 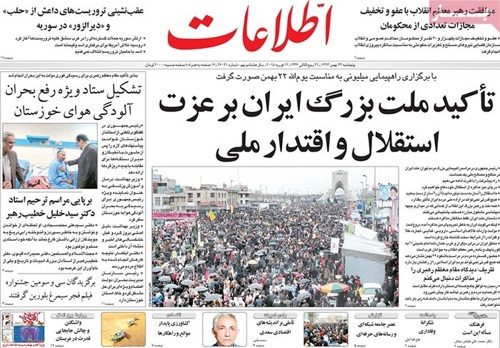 Hamshahri: Iran and Iraq cooperate to counter the oil plot. 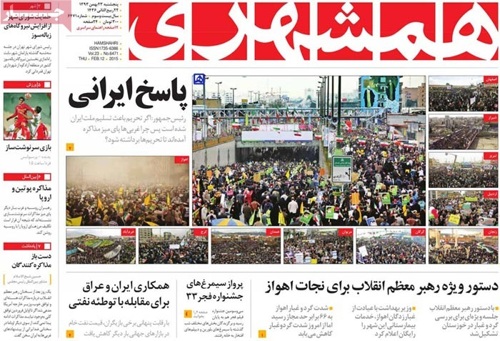 Hemayat: “No power can defeat the Iranian nation,” said the Judiciary chief during a revolutionary rally in Tehran. 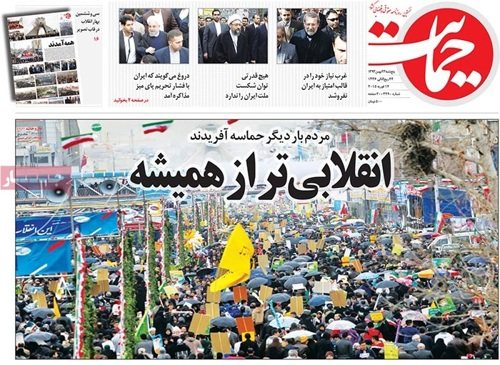 Iran: “We seek a deal that would guarantee Iranian interests,” said President Rouhani. 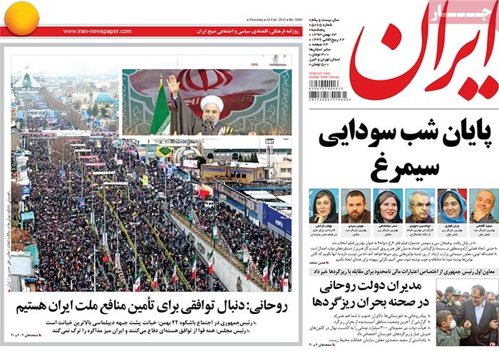 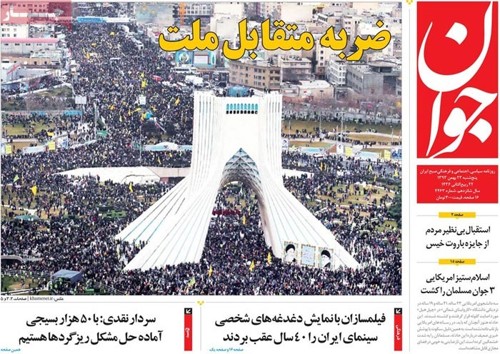 Jomhouri Islami: Construction of a second [nuclear] power plant in Bushehr gets underway next fall. 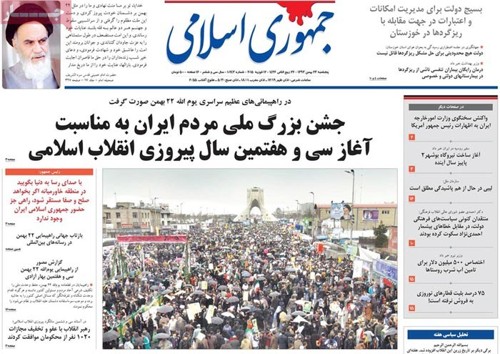 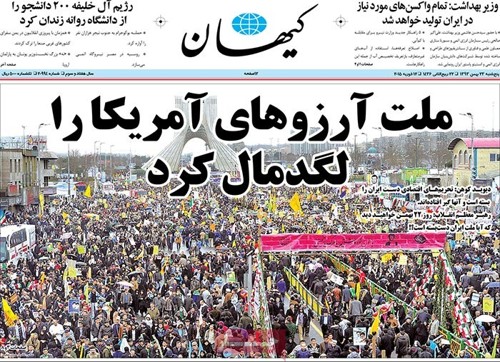 Khorasan: The Supreme Leader has ordered officials to deal with air pollution in Khuzestan Province.

Khorasan: “IS is nearing the end of the line,” said Major Gen. Ghasem Soleimani, the commander of the Quds Force.

Khorasan: “Those who caused insecurity in Sistan and Baluchestan for eight years have been arrested,” said the governor general. 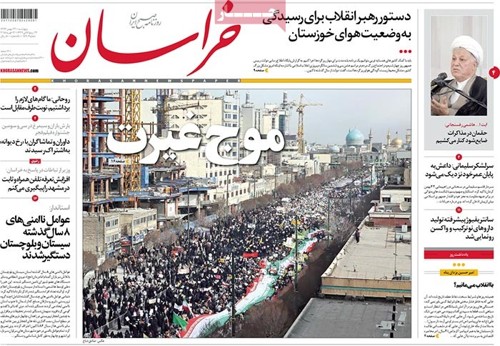 Shahrvand: “The Zionists are the only ones opposed to nuclear talks,” said the president.

Shahrvand: Those who develop breathing problems in Ahvaz [because of air pollution] are treated free of charge. 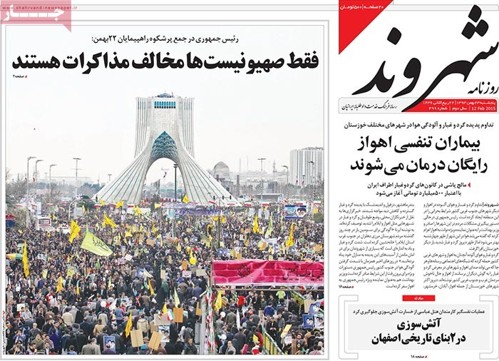