A look at Iranian newspaper front pages on Feb. 1

IFP has taken a look at the front pages of newspapers on Sunday,February 1, 2015, and picked headlines from 16 of them. IFP has simply translated the headlines and does not vouch for their accuracy.

The warning of the Supreme Leader during an inspection tour of a nanotechnology exhibition to officials to keep politics out of science and research and the president’s criticism of hardliners who use every opportunity to take aim at his government dominated the front pages of Iranian dailies on Sunday.

Abrar: A member of parliament’s Agriculture Committee has floated the idea of water imports from Azerbaijan Republic. 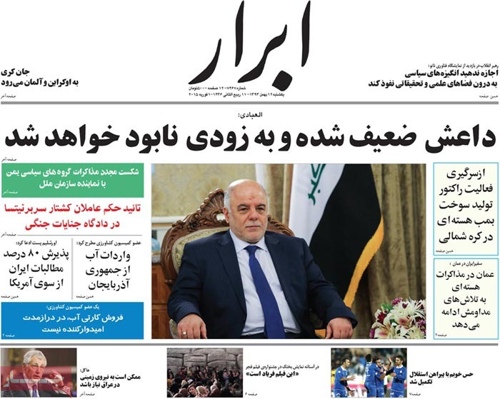 Afarinesh: “Do not allow political motivations to find their way into scientific and research centers,” said the Supreme Leader during an inspection tour of a nanotechnology exhibition.

Afarinesh: The US Statement Department has said that Secretary Kerry and Foreign Minister Zarif are likely to meet during the Munich Security Conference.

Afarinesh: “The IS terrorist group had set its sights on Tehran,” said a senior advisor to the commander of the Quds Force, an affiliate of the Islamic Revolution Guard Corps. 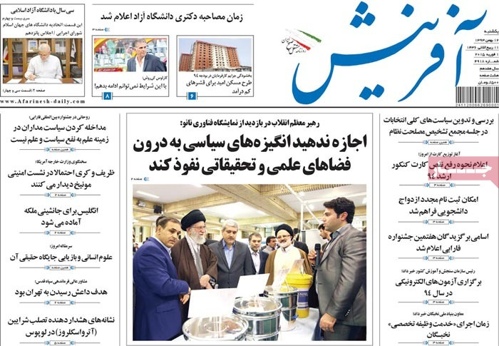 Afkar: Deputy Minister of Culture and Islamic Guidance Hossein Entezami has said that actors and sports figures can appear in commercials involving local products and industries. 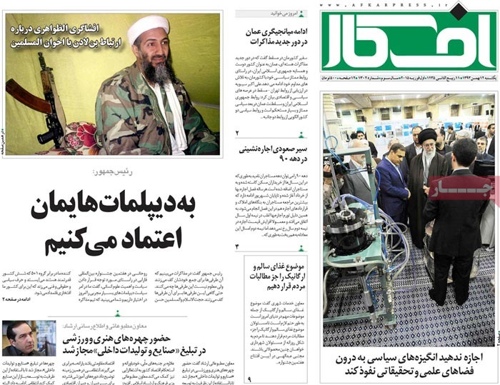 Amin: Parliament Speaker Ali Larijani has condemned the killing of Shiites in Pakistan. 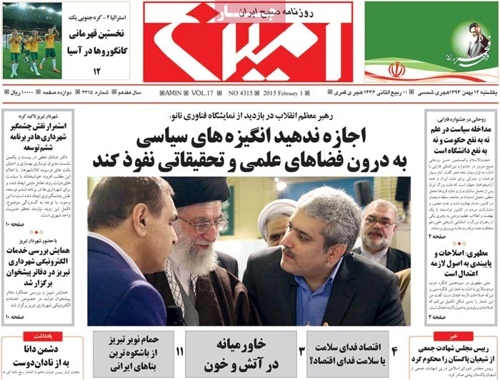 Arman-e Emrooz: President Rouhani has taken a swipe at hardliners who seize every opportunity to lash out at his government. “That some say they [diplomats representing Iran in nuclear negotiations with P5+1] have walked too fast or too slow, or that their coats are askew, etc. is nonsense.”

Arman-e Emrooz: “February 11 [which marks the victory of the Islamic Revolution 36 years ago] does not exclusively belong to a certain group. It is everyone’s festivity,” said Ayatollah Hashemi Rafsanjani. 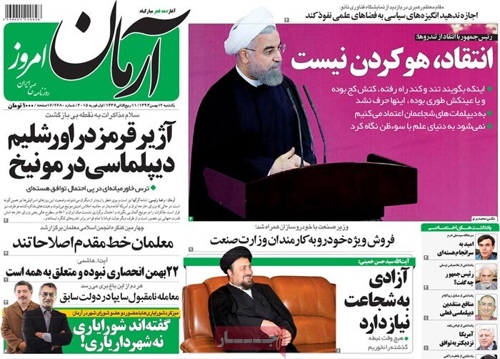 Asr-e Iranian: The center that deals with organized cyber-crime has busted a network producing unethical content on Facebook. 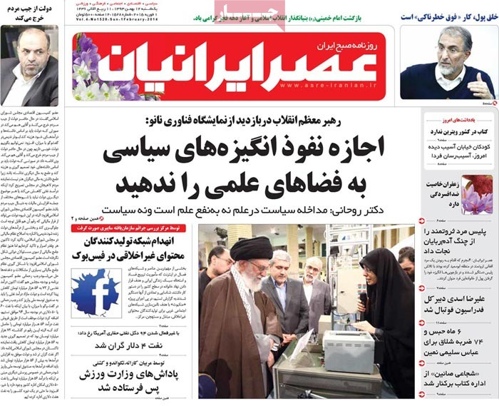 Asrar: “Some are harming our national interests in the name of criticism,” President Rouhani said as he threw his weight behind “our brave diplomats” and accused some hardliners at home of cheering the other side in nuclear talks. 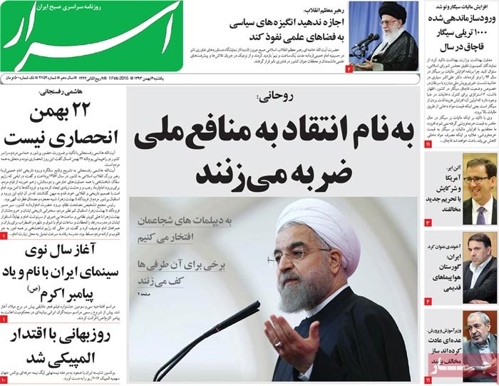 Etemad: “The privatization of the past amounted to an auction in which the national capital went under the hammer,” said the minister of roads and urban development. 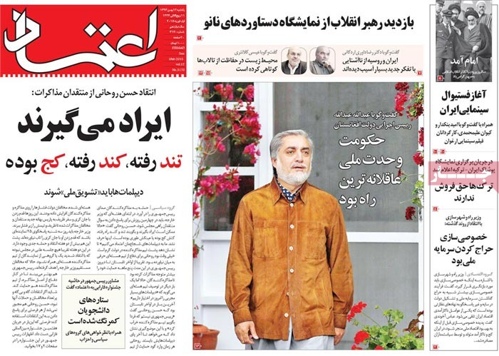 Javan: The Ministry of Culture and Islamic Guidance has sacked one of its managers opposed to the release of a book with an anti-revolutionary theme. 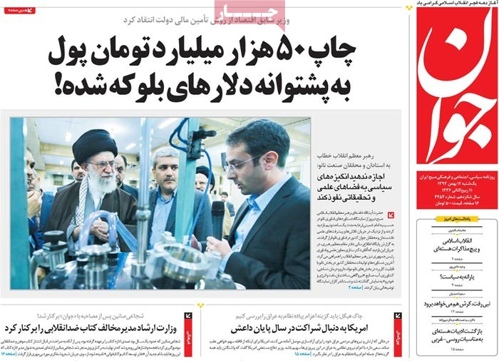 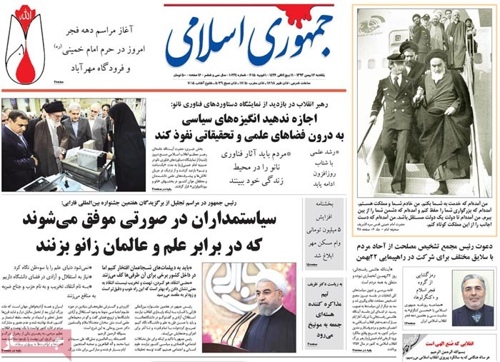 Khorasan: Oil prices have climbed above $50 a barrel. 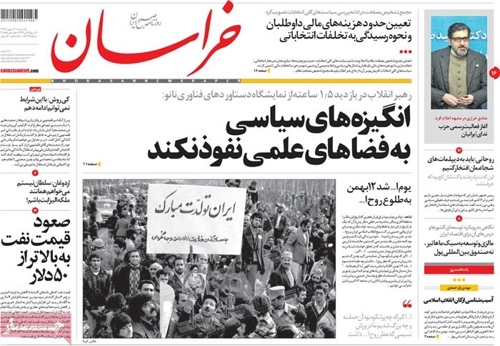 Mardomsalari: The spokesman of the Supreme National Security Council has denied reports by media outlets affiliated to foreign countries about what has happened in the meetings of the council. 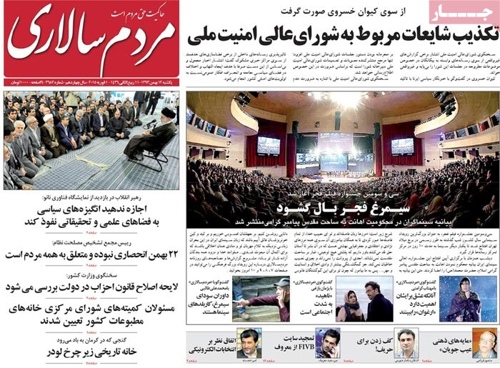 Rah-e Mardom: ‘Under the present circumstances, I can’t carry on leading the national team,” said Carlos Queiroz, the Portuguese coach of the Iranian soccer squad. 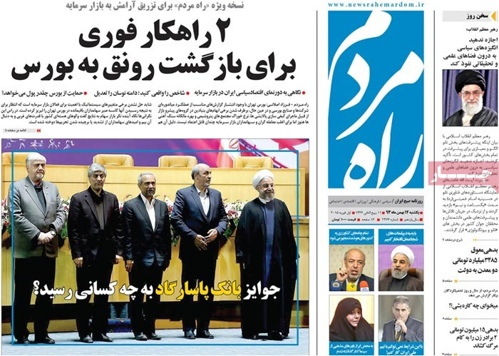 Resalat: “We don’t need to import sugar and rice,” said the minister of agriculture jihad. 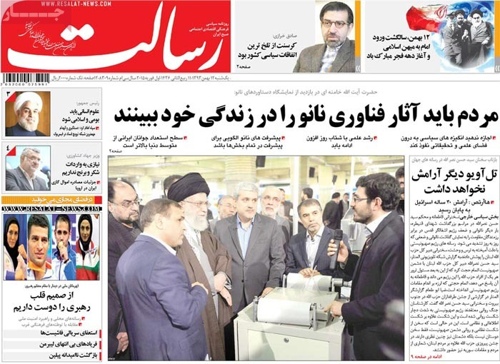 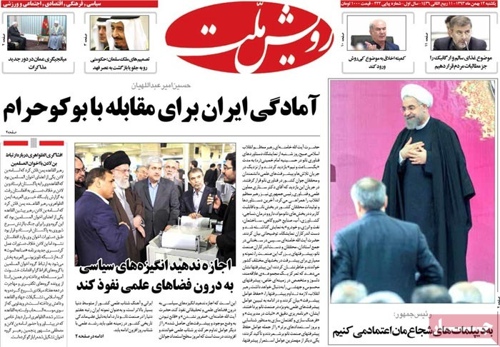 Sharq: The grandson of the founding father of the Islamic Republic has said that one needs to be brave in order to secure freedom. 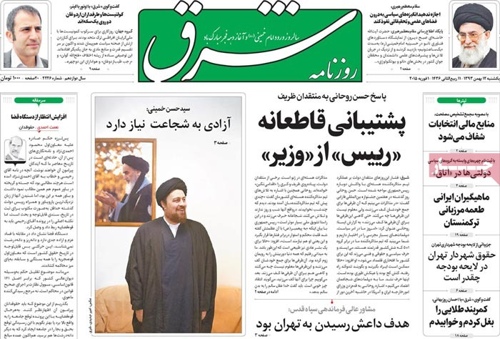