A look at Iranian newspaper front pages on Dec. 9

A meeting in Tehran on ways of promoting healthy administrative strategies and countering corruption and the message the Supreme Leader sent to the meeting, which was attended by senior state officials, dominated the front pages of Iranian newspapers on Tuesday. In the message the leader urged officials with the three branches of government to match their words with action in turning up the heat on corruption. The comments of the executive, judiciary, and legislative chiefs in the same meeting made front-page headlines, too. Also in the headlines was the statement of the visiting Iraqi Foreign Minister Ibrahim al-Jaafari that Baghdad does not have any problem with Iran conducting air raids against IS positions on Iraqi soil. 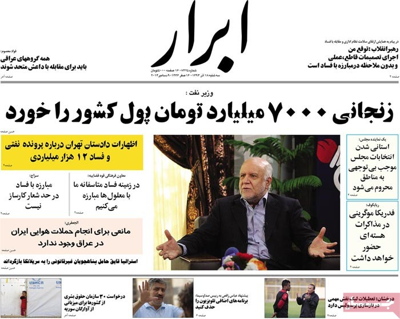 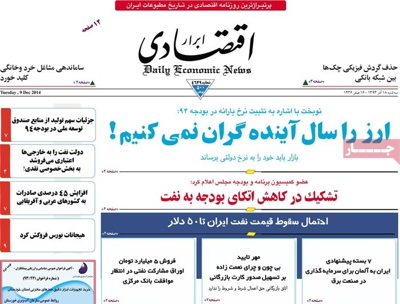 Afarinesh: The Intelligence Ministry has stopped almost $2 billion in tax evasion over the past year. 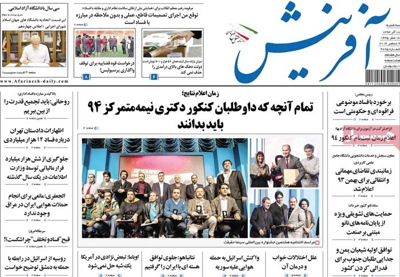 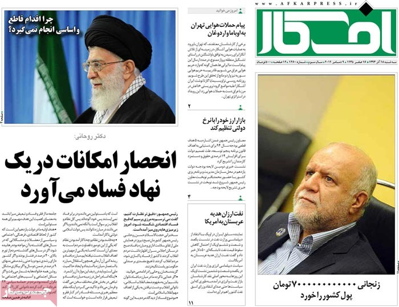 Aftab-e Yazd: “The measures the current government is taking are redressing the problems caused under the previous government,” said Parliament Speaker Ali Larijani. 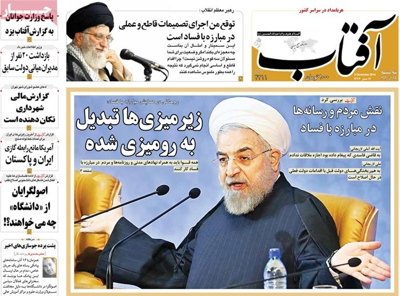 Arman-e Emrooz: There are as many as 40 million Internet users in Iran. 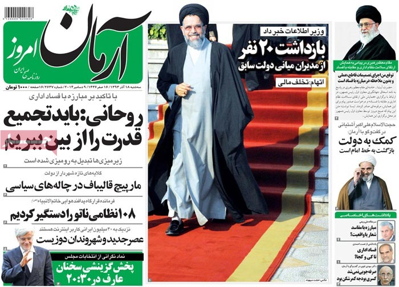 Asrar: “A clean air bill is waiting for parliamentary approval,” said the director of the Environment Protection Organization. 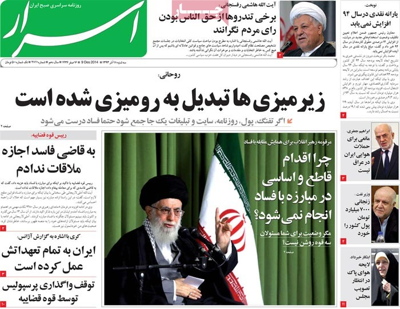 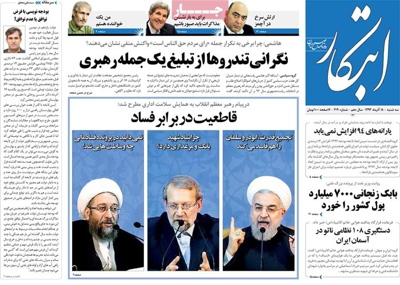 Ettela’at: As many as 40 major Iranian oil projects are to be announced in a Conference in London. 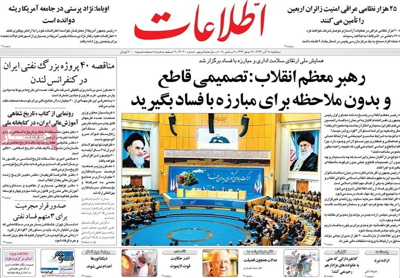 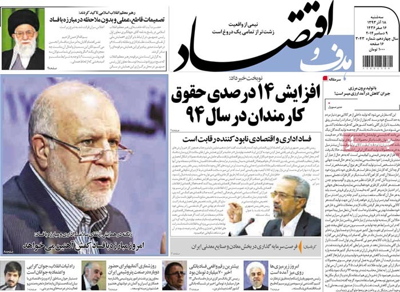 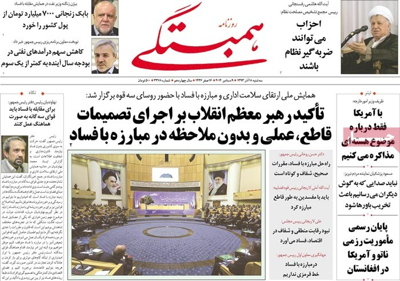 Hemayat: Judiciary Chief Ayatollah Sadegh Amoli Larijani has urged executive institutions to focus more on areas which have the potential for corruption. 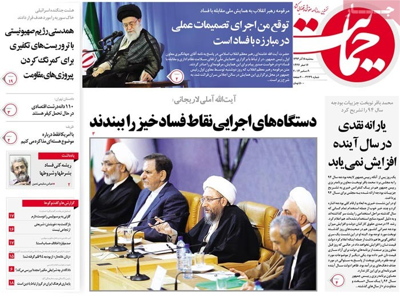 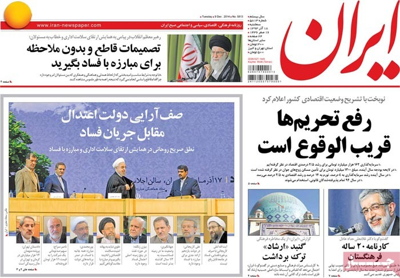 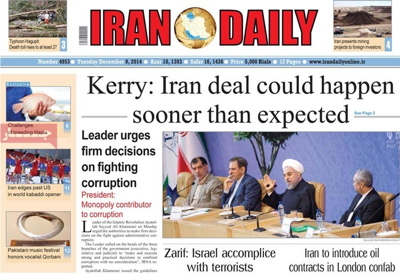 Jahan-e Sanat: “Some $40 billion worth of projects across Iran are waiting for foreign investment.” 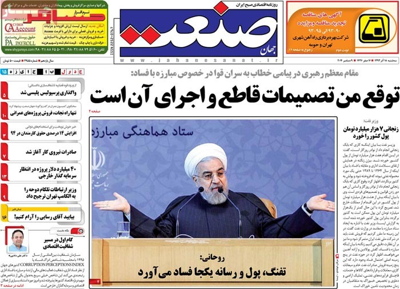 Javan: “There are no problems with Iran conducting air strikes against IS in Iraq,” said the Iraqi foreign minister who is in Tehran to attend a conference on World against Violence and Extremism.

Javan: “Why is it that serious measures are not taken in the fight against corruption?” the Supreme Leader asked in a message to a gathering to promote healthy administrative strategies and counter corruption. 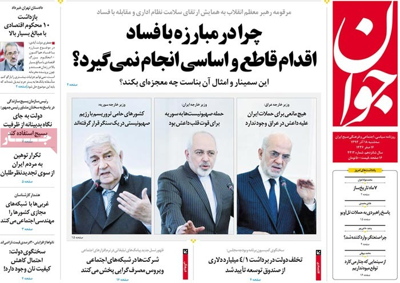 Kayhan: “Instead of organizing seminars, serious measures should be taken in the fight against corruption,” said the Supreme Leader in a message to an anti-corruption conference in Tehran. 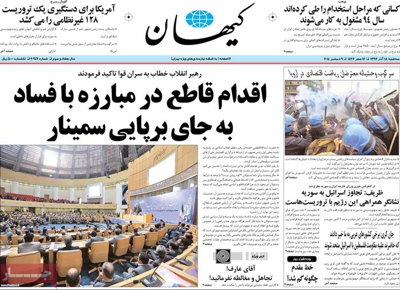 Khorasan: The heads of the three branches of government have underlined measures to crack down on corruption. 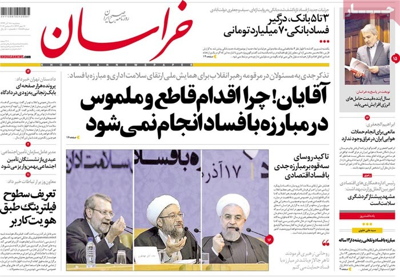 Mardomsalari: As many as 800 thousand Iranians have crossed the border into Iraq to take part in ceremonies to mark Arba’een [a Shiite religious observance that comes 40 days after Ashura, which marks the martyrdom of the grandson of Prophet Muhammad].

Mardomsalari: The managing director of Persepolis Football Club, who is in prison after sponsors filed a suit against the Reds, cannot have visitors. 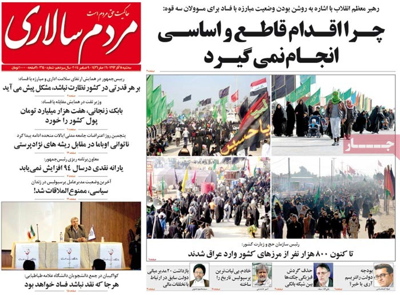 Qods: The head of the Securities and Exchange Organization is to be replaced. 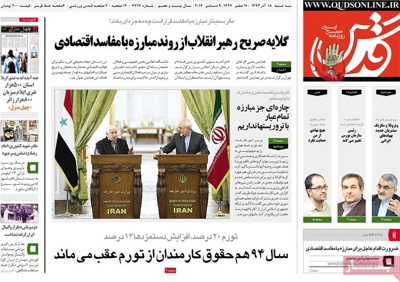 Resalat: “If parliament does not revise [the government-proposed] budget [for Tehran Municipality], we will have problem running the capital,” said Tehran Mayor Mohammad Bagher Ghalibaf. 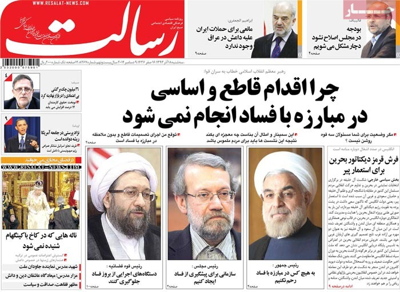 Sayeh: “Airstrikes by the Zionist regime against Syria are designed to boost the morale of terrorists,” said Iranian Foreign Minister Mohammad Javad Zarif. 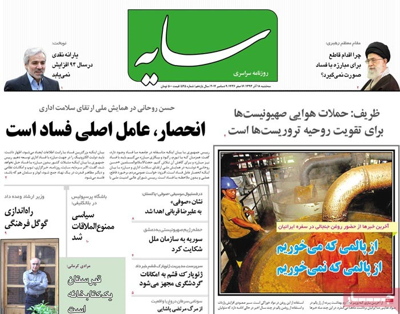 Sharq: “Twenty mid-level managers of the previous government have been arrested for fraud,” said the intelligence minister. 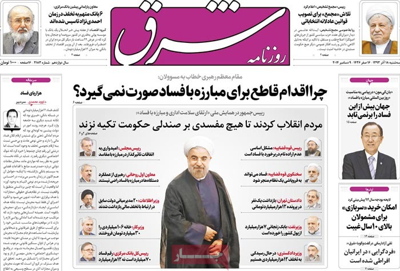 Taadol: Senior state officials on alert to turn up the heat on corruption. 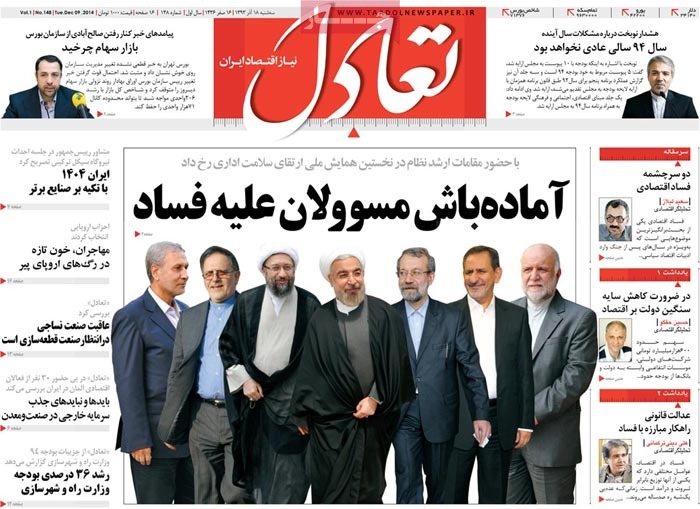 Vatan-e Emrooz: Parliament’s Planning and Budget Committee has established that government has unlawfully tapped into the National Development Fund. 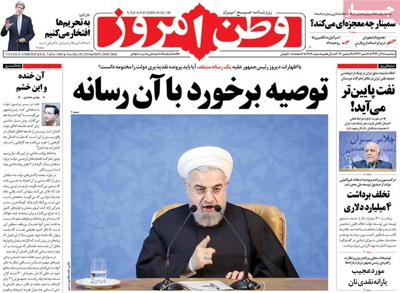