A look at Iranian newspaper front pages on Dec. 30

The row between parliament and the executive over the alleged withdrawal of money by the latter from the National Development Fund continued to dominate the front pages of Iranian dailies on Tuesday. Some newspapers led on comments by the Central Bank chief that the rial will gain ground against major currencies after the holiday season and those of President Obama about the likelihood of a thaw in relations between Tehran and Washington.

Abrar: Mohammad Bagher Nobakht has been tapped by the president to lead the newly-reinstated Management and Planning Organization.

Abrar: The Economy Council has approved the Oil Ministry’s plans to develop the oilfields Iran jointly owns with other countries. 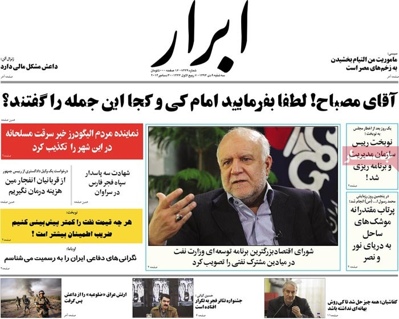 Abrar-e Eghtesadi: The value of rial against the greenback will increase after January, said the governor of the Central Bank of Iran. 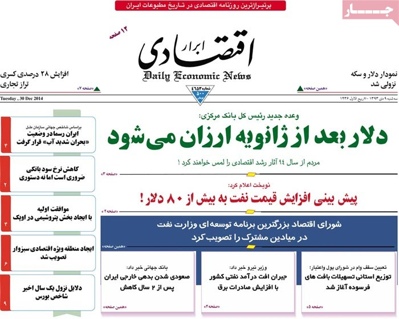 Aftab-e Yazd: The $4 billion duel [between parliament and the executive branch] continues. The Inspector General has said there has been no withdrawal from the National Development Fund.

Aftab-e Yazd: President Obama has not ruled out the reopening of the US embassy in Tehran. 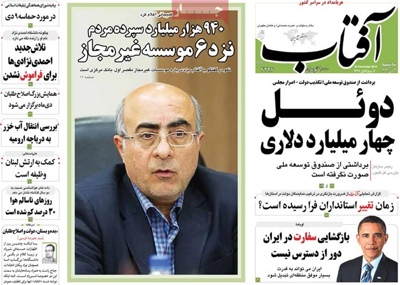 Arman-e Emrooz: “[Islamic Revolution Guard Corps Brigadier General Hamid] Taghavi made the ultimate sacrifice in Samarra, Iraq to prevent Iranians dying inside Iran,” said Ali Shamkhani, the secretary of the Supreme National Security Council at the funeral of the Revolution Guards commander who was martyred in Iraq on an advisory mission.

Arman-e Emrooz: The spokesman of the Guardian Council has urged political groupings not to use the name of the council as a means to intimidate each other. 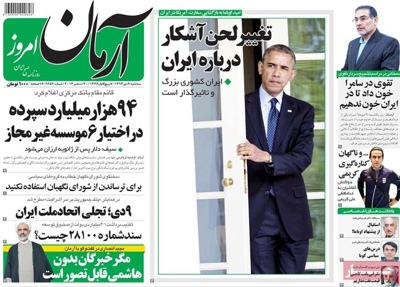 Asr-e Iranian: The Iranian law enforcement has seized a ton of narcotics [in the southeast], killing two drug traffickers in an operation. 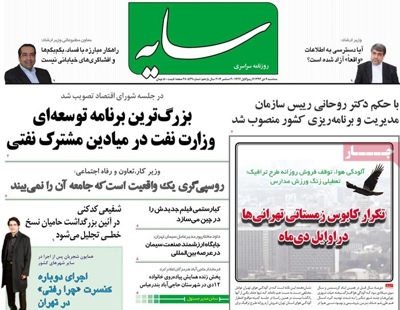 Ebtekar: Three members of the Islamic Revolution Guard Corps were martyred in an ambush by outlaws on the border with Pakistan.

Ebtekar: Some 2,000 Syrians have been executed by IS terrorists in the past six months. 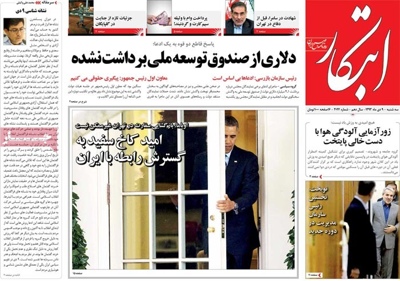 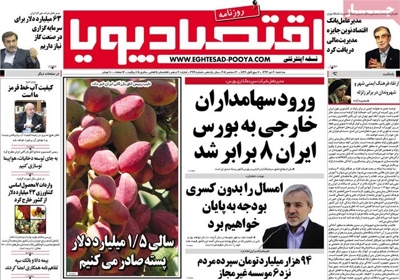 Ettela’at: The government invests $2 billion in the water industry to make the country’s water-related problems a thing of the past. 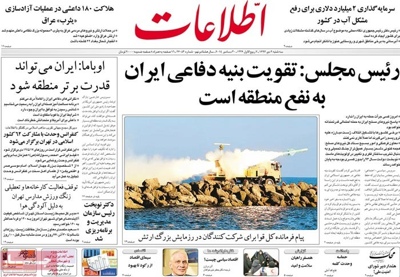 Hambastegi: “Some are trying to deliberately create tension in relations between parliament and government,” said the first vice-president. 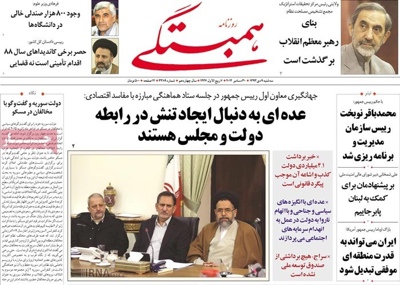 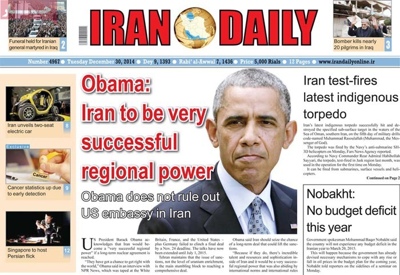 Javan: “The treason committed by those who caused unrest [following the presidential elections of 2009] is unforgettable,” participants in a gathering dubbed “The blow republicanism dealt to aristocracy” announced. 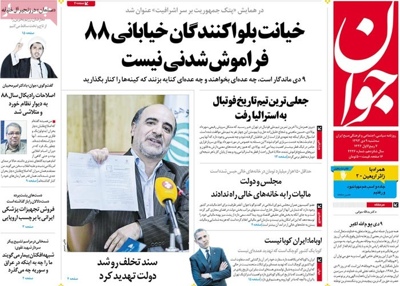 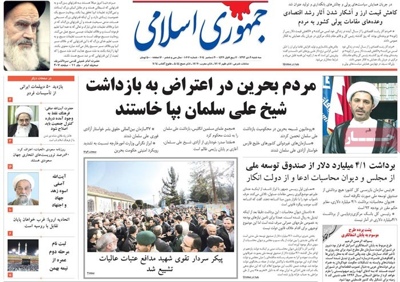 Kar va Kargar: “That the government has acted illegally in withdrawing $4.1 billion from the National Development Fund is beyond doubt,” said the prosecutor of the Supreme Audit Court. 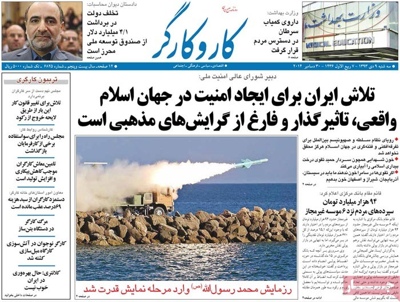 Kayhan: A funeral has been held for Brigadier General Hamid Taghavi who was martyred in Iraq on a mission to advise Iraqi forces against IS terrorists. 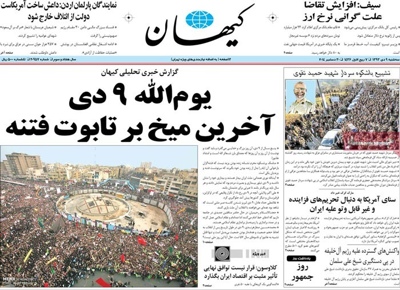 Khorasan: The first vice-president has ordered a lawsuit to be filed against those who allege that the government has illegally withdrawn $4.1 billion from the National Development Fund. 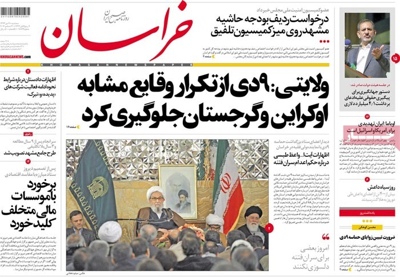 Mardomsalari: “There are as many as 800,000 empty seats in universities,” said the minister of science, research and technology. 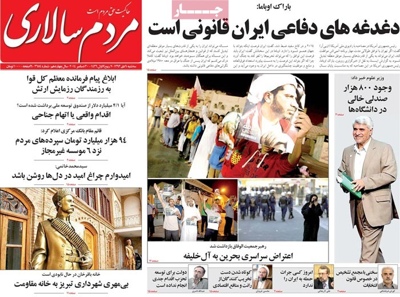 Qods: “Construction of two new nuclear reactors has got underway,” said the spokesman of the Atomic Energy Organization of Iran. 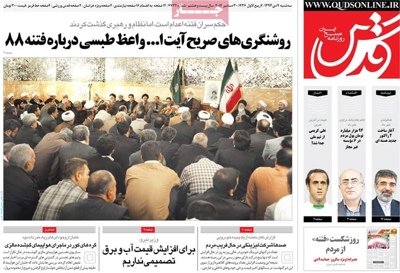 Sayeh: The next movie of [renowned Iranian filmmaker Abbas] Kiarostami is set in China.

Vatan-e Emrooz: Four national soccer team players who were previously banned from flying to Australia because of draft-related problems have been allowed to join the Iranian squad in the Asian Cup 2015. 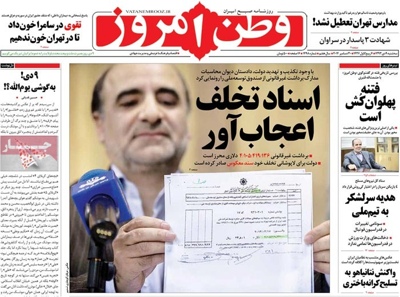