A look at Iranian newspaper front pages on Dec. 14

IFP has taken a look at the front pages of newspapers on Sunday and picked headlines from 25 of them. IFP has simply translated the headlines and does not vouch for their accuracy.

The massive presence of Shiites from around the world in Iraq, with some estimates putting the crowd at 20 million, to keep alive the memory of the Prophet’s grandson and the uprising he led against the oppressors of the time dominated the front pages of Iranian newspapers on Sunday.

Abrar: “In nuclear talks we act in keeping with the principles of the establishment and we won’t quit that path,” said President Hassan Rouhani. 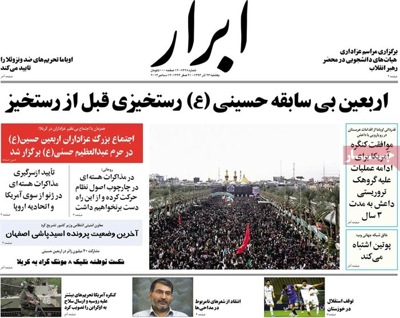 Afarinesh: “Iranian pilgrims who have traveled to Iraq without passport should return home only through Chazabeh Border Crossing,” announced the Iranian Interior Ministry. 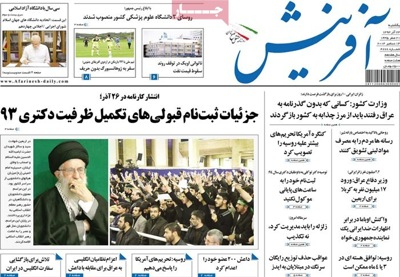 Afkar: “As much as 80 percent of next year’s development budget is unlikely to materialize,” predicted a member of parliament’s Development Committee. 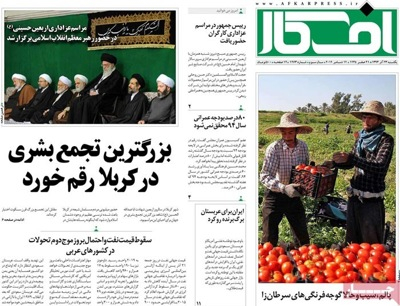 Aftab-e Yazd: “President Rouhani’s government is facing a mountain of problems. Just like Lionel Messi and Cristiano Ronaldo, the previous government only sought to set new records,” said a minister who served in the Cabinet of President Ahmadinejad.

Aftab-e Yazd: For the first time a junior drug rehabilitation center is to be launched in Iran.

Aftab-e Yazd: “The Islamic Republic of Iran Broadcasting [national broadcaster] would not allow me to talk about corruption on its talk shows,” said Justice Minister Mostafa Pourmohammadi, who previously served as inspector general. 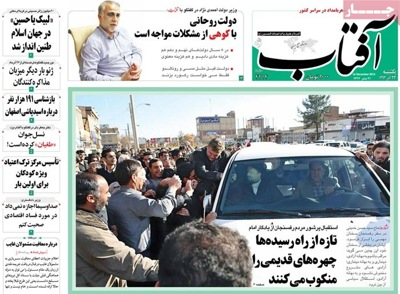 Arman-e Emrooz: As many as 100 officials who served under President Ahmadinejad will be summoned to court.

Arman-e Emrooz: “President Rouhani faces a crisis every four days. Mid-level managers of the government still act in line with the policies set by Ahmadinejad. Principlists have benefited the most from the moderation President Rouhani practices,” said Ahmad Khorram, a former minister of roads and transportation, in an exclusive interview with the daily. 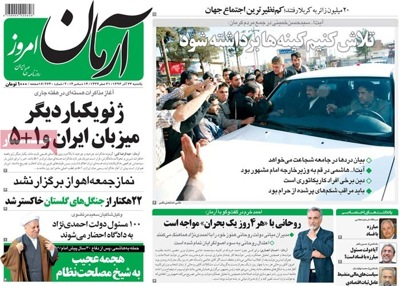 Asr-e Iranian: “Termination of all sanctions should be part of any comprehensive nuclear deal,” said Iran’s envoy to the International Atomic Energy Agency. 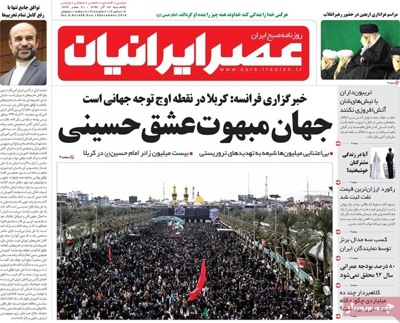 Asrar: “People should not be stripped of their legitimate freedoms under the pretext of religiosity,” said Seyyed Hassan Khomeini, the grandson of the architect of the Islamic Republic. 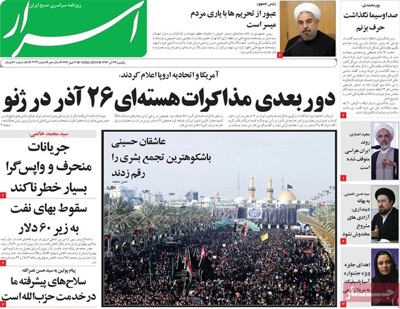 Ebtekar: Esfandiar Rahim Mashaei, President Ahmadinejad’s chief of staff, has eventually broken his silence. “I have quit politics once and for all.” 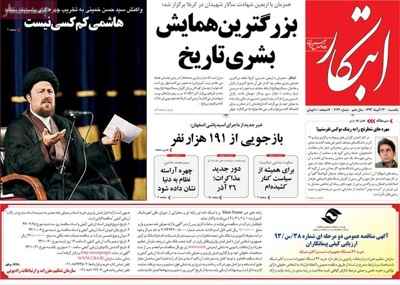 Eghtesad-e Pooya: Under next year’s budget bill some $5 billion dollars will be injected to the banking system. Etemad: “As many as 100 people are suspects in a string of acid attacks in Isfahan earlier this year,” said the deputy interior minister for security and police affairs.

Etemad: The grandson of Imam Khomeini has warned of a propaganda blitz by a group of upstarts against revolutionary figures. 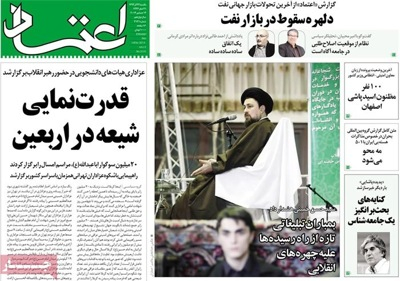 Ettela’at: Some 2 million Iranian pilgrims took part in Arba’een [a Shiite religious observance that comes 40 days after Ashura, which marks the martyrdom of the grandson of Prophet Muhammad] ceremonies in Iraq. 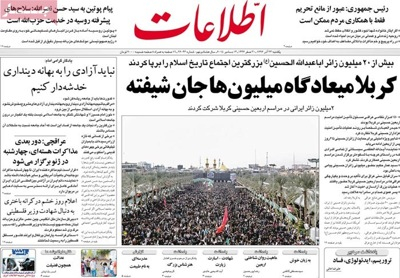 Hambastegi: “Iranian pilgrims who are in Iraq have 10 days to return home,” said the Iranian deputy interior minister.

Hambastegi: “A cultural justice plan is to be implemented,” said Ali Jannati, the minister of culture and Islamic guidance. 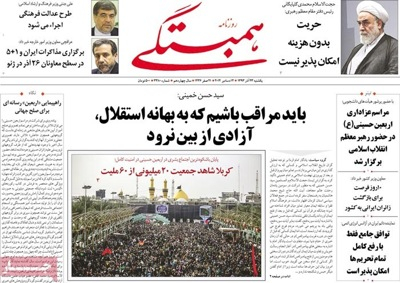 Hemayat: “A new round of nuclear talks between Iran and P5+1 will open in Geneva on Wednesday [December 17],” said Iranian Deputy Foreign Minister Seyyed Abbas Araghchi.

Hemayat: The presence of as many as 20 million Shiites in Karbala to take part in Arba’een ceremonies took IS terrorists and their masters off guard. 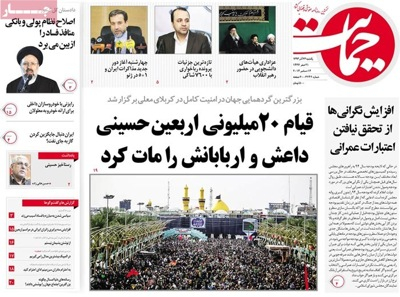 Iran: President Rouhani had a meeting with the families of Iranian combatants who made the ultimate sacrifice [during the Iran-Iraq war in the 1980s], before attending an Arba’een function. 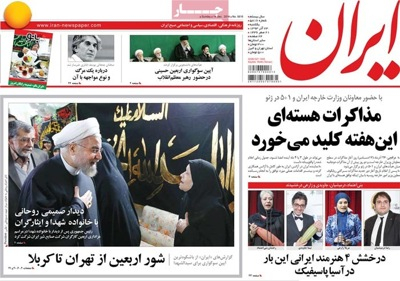 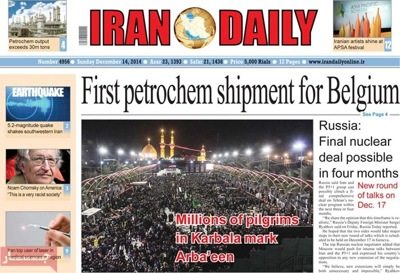 Javan: With oil companies downsizing, Saudi Arabia’s [cheap] oil has taken a toll on stock exchanges around the world. 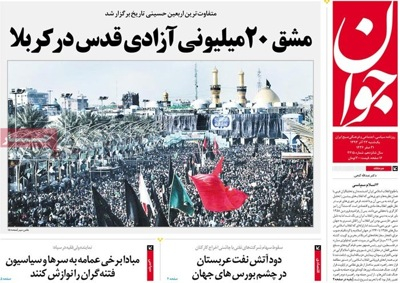 Jomhouri Islami: The IS terrorists have executed 200 from among their own ranks [apparently for fleeing the theater following a Syrian army assault]. 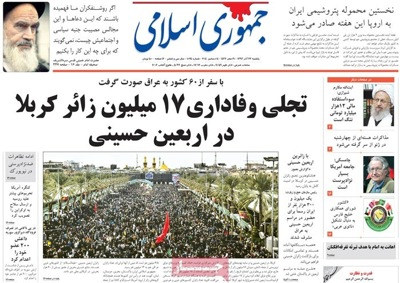 Kaenat: The FBI has alleged that Iranian hackers are bent on mounting cyber-attacks against American businesses. 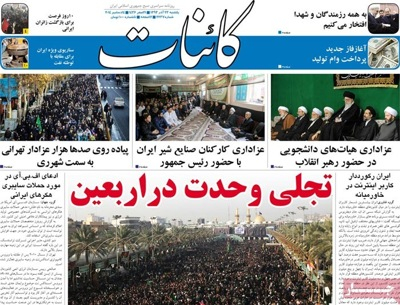 Kayhan: A special train service has been launched to take Iranian pilgrims who were in Iraq back to Tehran. 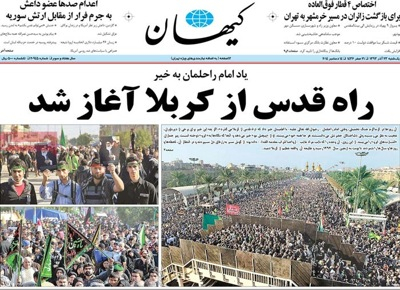 Khorasan: The freefall of the black gold continues. Crude prices fall below $60 a barrel. 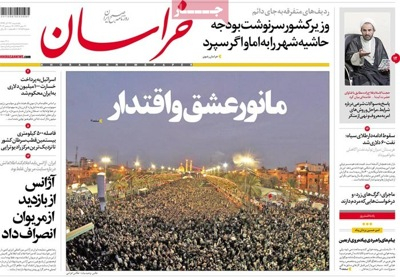 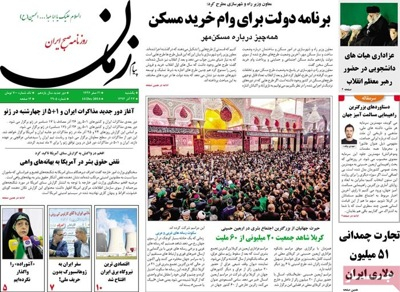 Qods: A mourning function was held in Tehran with the Supreme Leader in attendance to mark Arba’een. 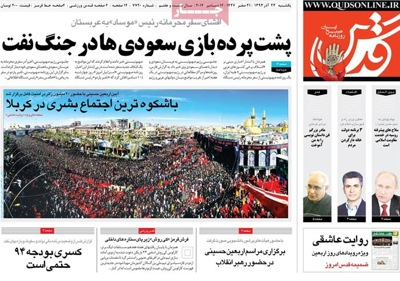 Roozan: Four Iranians have walked away with awards from the Asia Pacific Screen Awards (APSA) festival in Australia. 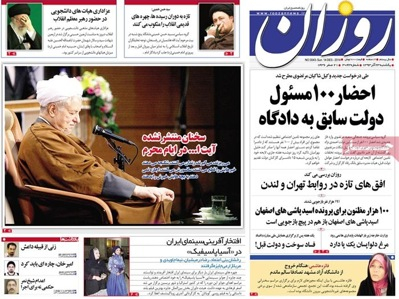 Sharq: “It may take two years to purge Iraq of IS terrorists,” said Iraqi Foreign Minister Ibrahim al-Jaafari in an exclusive interview with the daily. 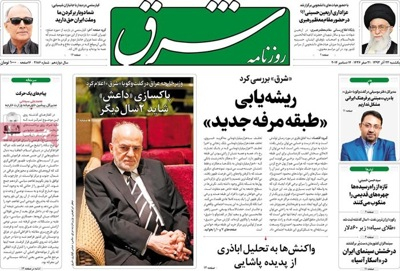 SMT: The Iranian government spokesman has said 246 major projects will be inaugurated in March 2015.

SMT: Saipa [a giant Iranian carmaker] is to launch cooperation with German firms on production of environment-friendly automobiles. 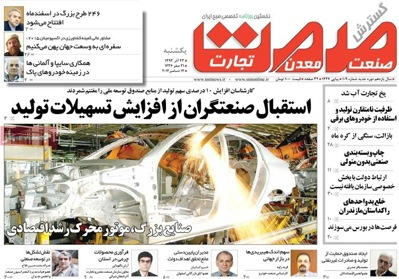