A look at Iranian newspaper front pages on Dec. 11

Images of pilgrims on their way to Karbala, Iraq to take part in Arba’een [a Shiite religious observance that comes 40 days after Ashura, which marks the martyrdom of the grandson of Prophet Muhammad] ceremonies dominated the front pages of Iranian newspapers on Thursday.

Abrar: The foreign ministers of Iran, Tajikistan and Afghanistan will soon hold a trilateral meeting. 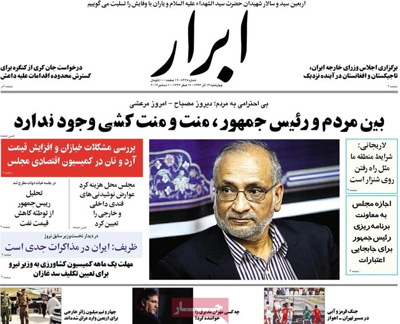 Afarinesh: “The [recent] drop in oil prices is part of a political plot hatched by some countries,” President Rouhani said. 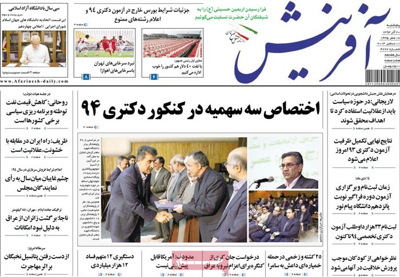 Aftab-e Yazd: “Women deserve to climb the social ladder higher than simply become a Cabinet minister,” said Naimeh Eshraghi, a granddaughter of the late Imam Khomeini, the founder of the Islamic Republic. 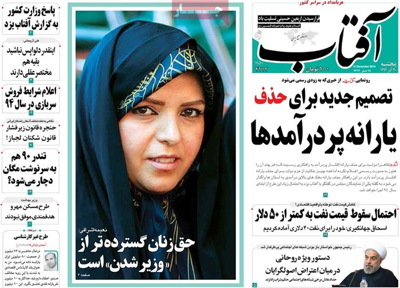 Arman-e Emrooz: “Unlike the budget bills of the previous government, the spending package President Rouhani’s government has sent to parliament for approval is realistic,” said Vice-President for Parliamentary Affairs Majid Ansari. 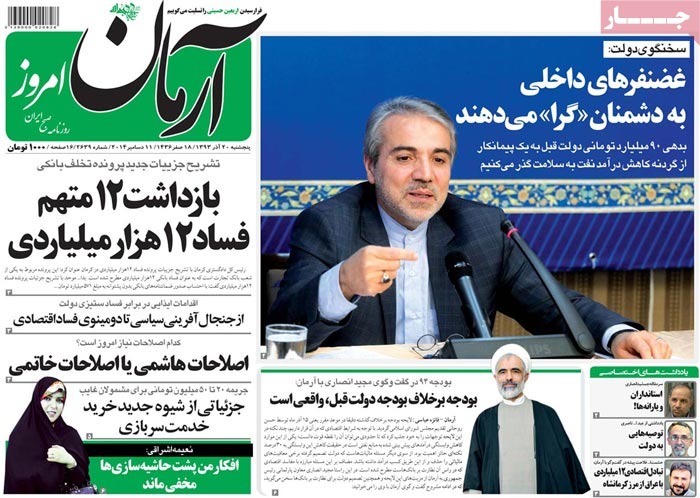 Asrar: “Cutting diplomatic ties with Egypt is not in our best interest,” said Ayatollah Lotfollah Safi Golpaygani, a prominent cleric and Shiite source of emulation. 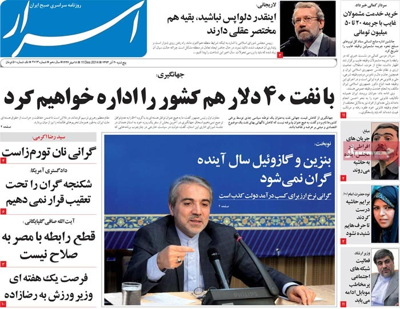 Ebtekar: “Please, don’t worry too much; others around you are in possession of their senses, too,” said Parliament Speaker Ali Larijani to the so-called Worriers [staunch supporters of former President Ahmadinejad who proclaim to be worried about the state of affairs under moderate President Rouhani.]

Ebtekar: “Twelve people have been arrested in connection with a recent $4 billion corruption,” said the head of Kerman [provincial] Justice Department. 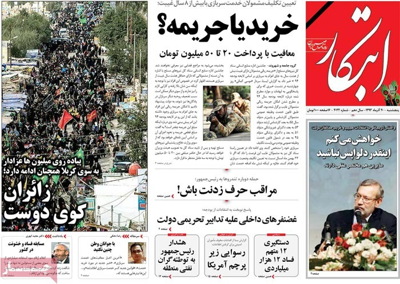 Eghtesad-e Pooya: “The private lives of citizens are a red line,” said the deputy minister of communications. 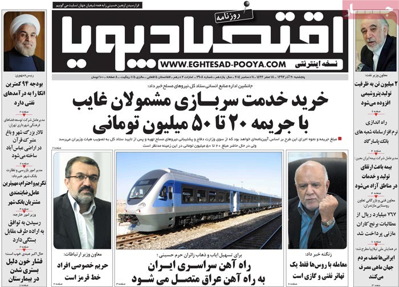 Emtiaz: Fear of bird flu has prompted officials to slap a ban on hunting migratory birds. 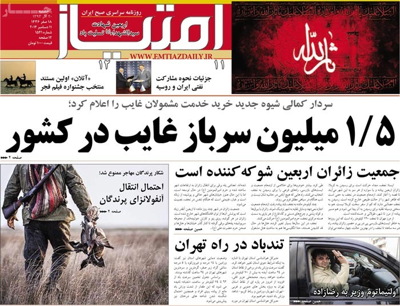 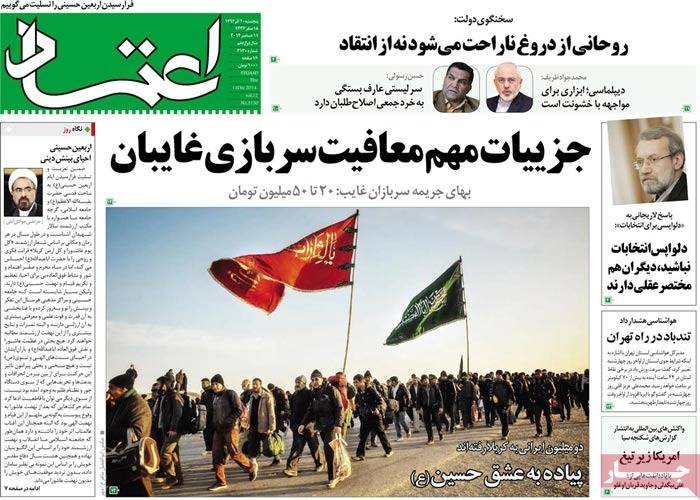 Ettela’at: The final statement of the Conference on World against Violence and Extremism [which wrapped up in Tehran on Wednesday] stresses inter-faith dialogue as well as efforts to promote the culture of peace.

Ettela’at: The number of Iranian pilgrims in Iraq to attend Arba’een ceremonies has hit the 1.2 million mark. 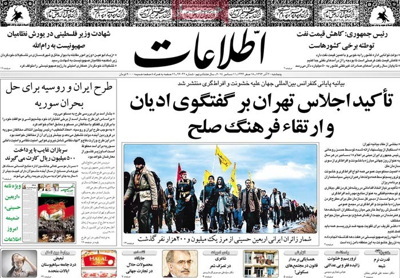 Hamshahri: Government owes more than $3.5 billion to the Public Transport Department of the capital’s municipality. Hemayat: “Efforts to counter corruption should not be limited to the Judiciary,” said the deputy chief of the Judiciary. 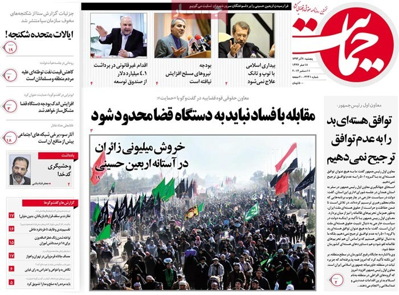 Iran: The Supreme Cultural Revolution Council has designated December 18 as national Day against Violence and Extremism. 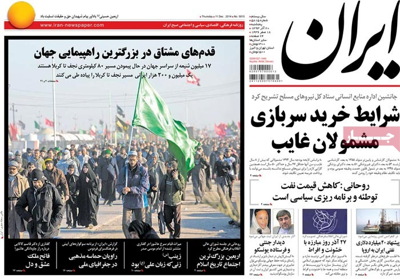 Javan: The Zionist regime has killed a Palestinian minister.

Javan: The Satan is ashamed following the release [by the Senate] of a report detailing widespread physical and mental torture of detainees at the hands of CIA agents. Torture scenes in Hollywood movies pale in comparison with what the CIA has actually done to the detainees. 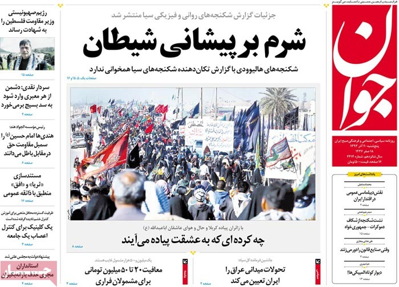 Jomhouri Islami: The volume of natural gas produced at South Pars Gas Field will have increased by 140 million cubic meters by the end of the year [March 21, 2015]. 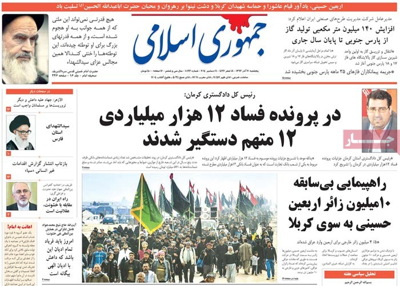 Kayhan: Details of a [Senate] report on the torture of detainees by CIA agents has taken the world aback. 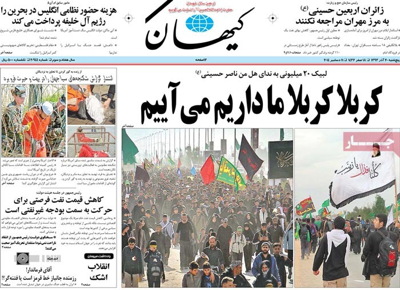 Mardomsalari: “Iran’s national railway will soon be linked to that of neighboring Iraq,” said the government spokesman.

Mardomsalari: A historic inscription believed to be 700 years old has been found in Shiraz. 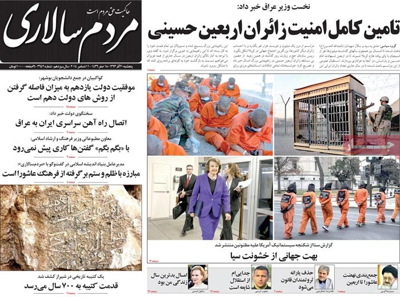 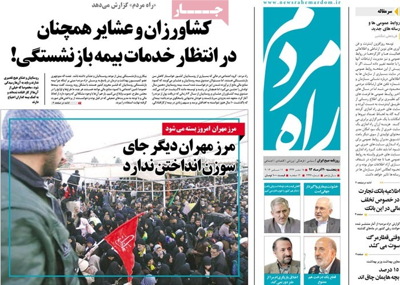 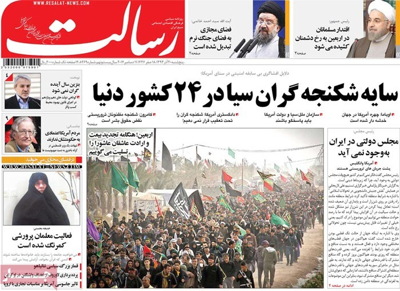 Roozan: Many Iranian pilgrims [on their way to Iraqi holy cities of Karbala and Najaf] had to return home after Mehran Border Crossing was closed because of overcrowding.

Roozan: “Reports that the budget allocated to the Presidential Office has increased in next year’s proposed spending package are false,” the government spokesman said. 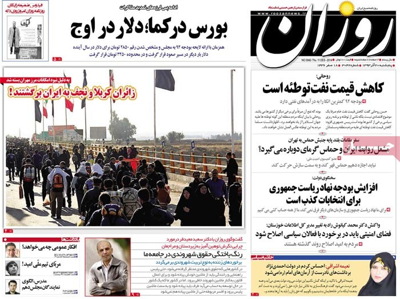 Sayeh: The World Health Organization has said that Iran has been successful in containing and eliminating malaria.

Sayeh: As many as 10,000 motorcycles need to be replaced with electric motorbikes in the capital each year,” said a member of the Transport Committee of Tehran City Council. 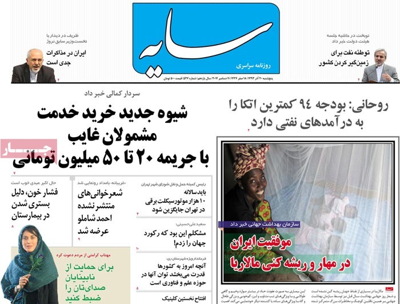 Shahrvand: Tehran Meteorological Office has issued a high wind warning for the capital.

Shahrvand: A man in the capital has killed his wife and daughter before turning the gun on himself. 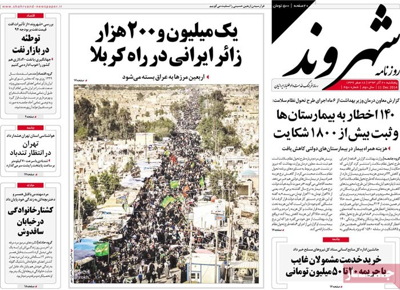 Vatan-e Emrooz: After admissions by the first vice-president and foreign minister that the Saudis are part of an oil plot [to keep crude prices down], a reassessment of the miscalculations of the ministries of oil and foreign affairs seems to be in order. 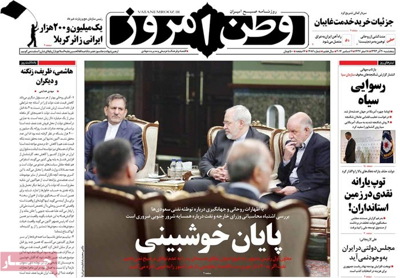