A look at Iranian newspaper front pages on Dec. 10

President Rouhani’s comments at a conference on World against Violence and Extremism in Tehran dominated the front pages of the Iranian newspapers on Wednesday. Most dailies focused on Mr. Rouhani’s 10-point plan to turn up the heat on terrorism and extremism and his appeal for December 18 to be designated as World Day against Violence and Extremism. Also grabbing headlines were the comments of the director of the Atomic Energy Organization that Iran is not supposed to ship its nuclear fuel overseas and those of Deputy Foreign Minister Seyyed Abbas Araghchi about the most recent rounds of nuclear talks in Muscat and Vienna.

Abrar: “Procurement of equipment for Arak Reactor does not amount to breach of Iran’s commitments,” said the spokesman of the Atomic Energy Organization of Iran. 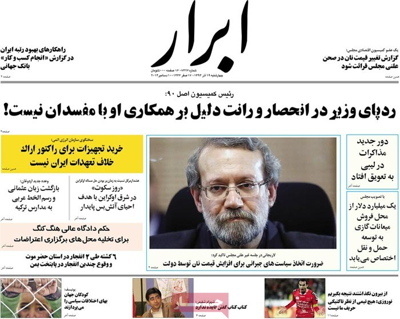 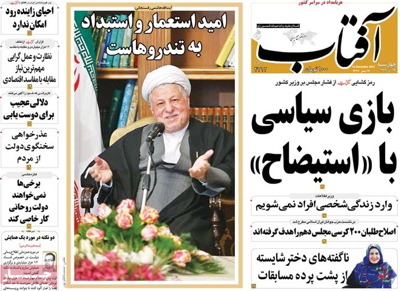 Arman-e Emrooz: Some 1 million birds are poached in Fereydunkenar [on the Caspian coast] each year. Authorities take no action. 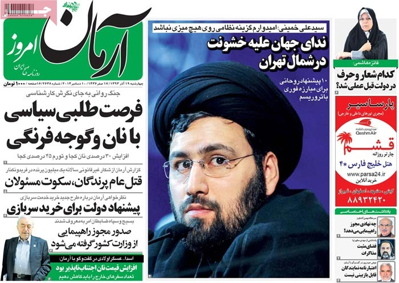 Asrar: “President Obama and Secretary Kerry are interested in solving the nuclear issue. Iran is not supposed to ship any fuel overseas,” said Ali Akbar Salehi, the director of the Atomic Energy Organization of Iran. 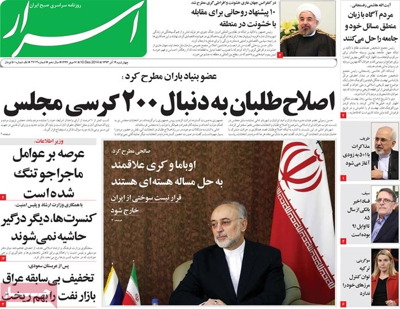 Etemad: In next year’s spending package, more than $300 million has been allocated to efforts to create jobs for the youth. The amount the package’s health chapter allots to prevention is too small. 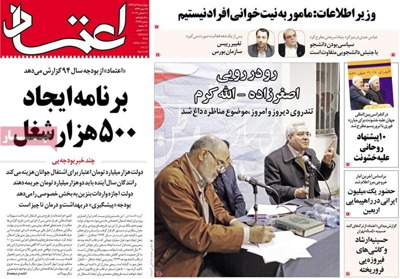 Ettela’at: Parliament has voted for the general outlines of a bill designed to lift the country out of recession. 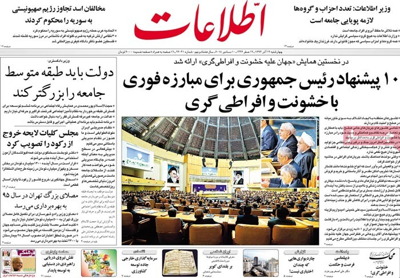 Farhikhtegan: Basij and the Islamic Revolution Guard Corps have been officially named by parliament as bodies in charge of implementing “Promotion of Virtue, Prevention of Vice”. Iran: President Rouhani has put forth a 10-point plan to take on terrorism and extremism at a World against Violence and Extremism conference in Tehran.

Iran: The price war has sent oil prices down to $65 a barrel. 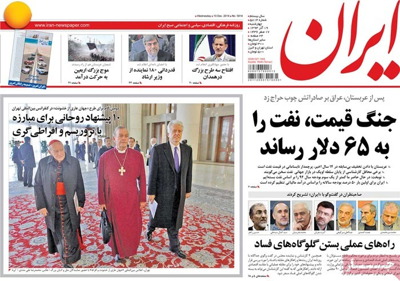 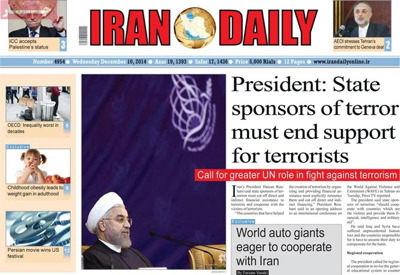 Javan: “Under no circumstances will we cross the country’s red lines. Talks in Muscat were on the verge of failure,” said Iranian nuclear negotiator Seyyed Abbas Araghchi. 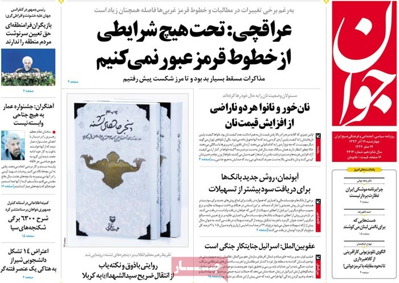 Jomhouri Islami: The pipeline that takes Iranian natural gas to Pakistan will be laid in 18 months.

Jomhouri Islami: Security has tightened in the US and around its missions overseas after Senate released a CIA torture report. 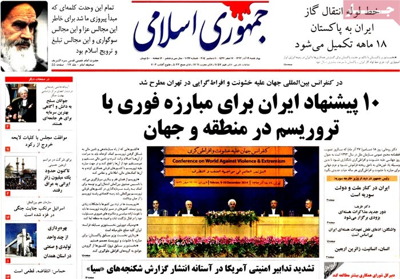 Kaenat: Authorities have said Mehran Border Crossing is packed with pilgrims who want to cross the border to Iraq to attend religious ceremonies there, urging pilgrims not to flock the crossing. 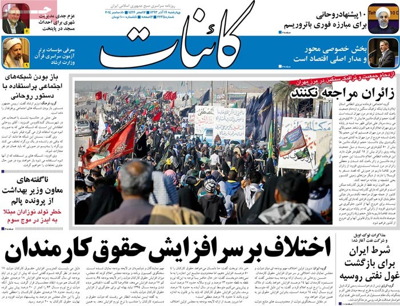 Mardomsalari: “Ignorance of the public in a society is the best means [for rulers] to put down uprisings” said Chairman of the Expediency Council Akbar Hashemi Rafsanjani. 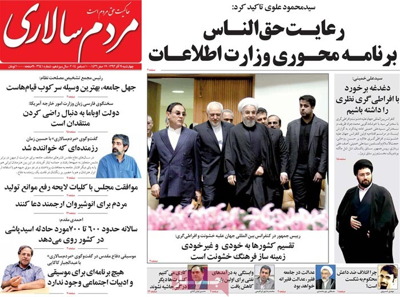 Payam-e Zaman: Iran’s nuclear chief has floated the formation of a Joint Nuclear Energy Council in the Persian Gulf region. 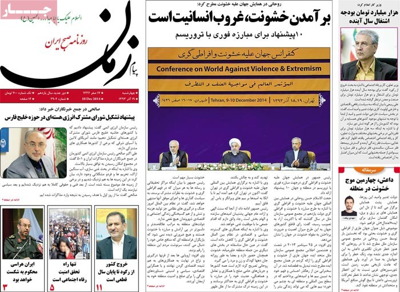 Resalat: “The veto power has paralyzed the United Nations. Major power efforts to serve their own interests have given rise to violence,” President Rouhani told an anti-violence conference in Tehran. 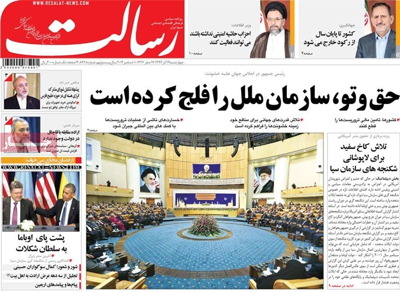 Roozan: “There is no ban on [Mohammad] Khatami’s appearance on TV programs,” said Ali Motahari, a principlist MP. 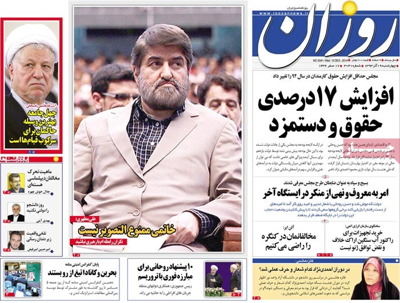 Sayeh: “Iran will definitely have been out of recession by yearend [March 21, 2015],” said First Vice-President Eshaq Jahangiri.

Sayeh: President Rouhani has called for December 18 to be designated as World Day against Violence and Extremism. 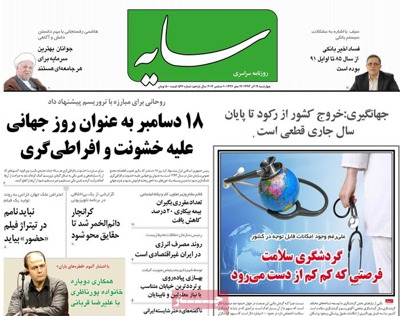 Sharq: “Violence in the name of religion is a disgrace,” said President Rouhani.

Sharq: Up to 70 percent of the shares of three banks belongs to a single person.

Sharq: “Iran Bar Association has tasked an in-house panel with piecing together an anti-corruption plan,” said Seyyed Mahmoud Alizadeh, a board member of the association. 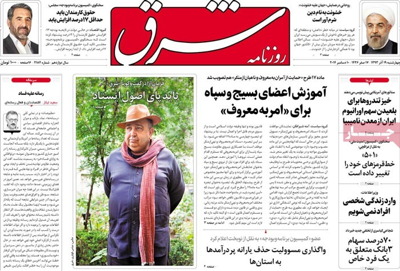 Vatan-e Emrooz: The US and Saudi Arabia are capitalizing on [the Iranian] government’s inactive oil diplomacy to further push down global crude prices. 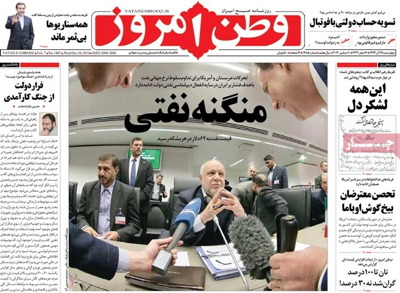