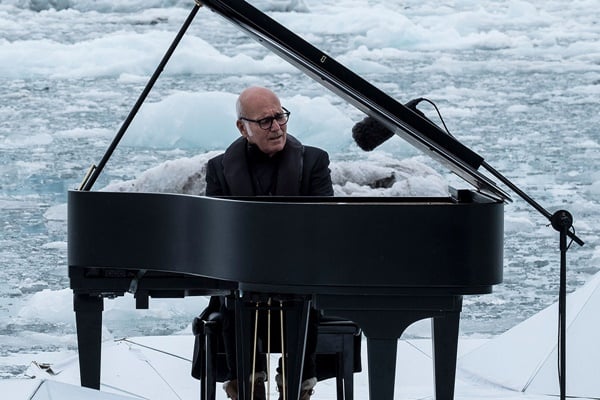 Renowned Italian pianist and composer, Ludovico Maria Enrico Einaudi, is expected to visit Iran along with his ensemble in April.

The creator of the well-known soundtrack of “Intouchables” is set to conduct a concert in Tehran within the next two months.

“The concert of the five-member Italian ensemble will be held on April 25 and 26 at the Interior Ministry Grand Hall in Tehran,” a Farsi report by Honar Online said.

The ensemble is accompanied by a sound technician, a light engineer and a back-liner.

More than for his albums, Einaudi is famous for his performance last year on a specially built ‘iceberg’ within 100m of a crumbling glacier as part of a campaign to save the Arctic.

Einaudi performed his minimalist music in the breathtakingly beautiful surroundings of Wahlenbergbreen glacier in Svalbard, Norway. As he played one descending scale, huge chunks of ice calved off the glacier.

He has also created the soundtracks of “This is England”, “I’m Still Here” movies as well as “Doctor Zhivago” serial.

During his Tehran concert, Einaudi is expected to play some of his well-known pieces including “Fly”, “Experience”, “Elements” and “Nights”.