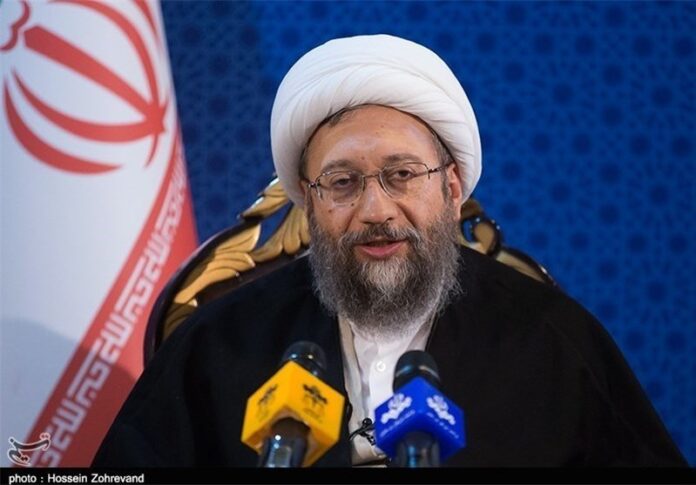 Iran’s Judiciary chief has dismissed a recent US statement on the US prisoners in Iran as pointless, and said legal proceedings in Iran are none of Washington’s business.

Speaking in a meeting with top Judiciary officials on Monday, July 24, Iranian Judiciary Chief Ayatollah Sadeq Amoli Larijani blasted the recent statement by the White House which urged the Islamic Republic to release the Iranian-American criminals behind bars in Iran.

“The laws of the Islamic Republic of Iran are among the most modern ones in the world,” said Ayatollah Amoli Larijani, according to a Farsi report by Mizan.

“The legal proceedings in Iran are based on the law and the Sharia Law, and our judges don’t care about remarks by people like [US President Donald] Trump, and discharge their legal responsibilities in the best way possible,” he added.

He then referred to the Islamic teachings and the traditions of infallible Imams on dealing with individuals charged with an offence.

“Our judges don’t care about the nationality of the defendant, and deal with the case only based on logic, the Sharia Law, and the country’s law as stipulated in the code of [civil/criminal] procedure. … Legal proceedings in Iran are none of the US president’s business,” said the Judiciary chief.

He went on to say that Iran does not recognize individuals with dual nationality.

“Some points have been mentioned in the [White House] statement regarding the trial of people with dual nationality. They (US officials) should know that we, based on our laws, do not recognize the ‘dual-nationality’ concept and believe individuals with two nationalities are considered Iranian nationals and they are treated exactly in the same way as other Iranians are dealt with.”

Accordingly, he added, neither the US nor any other country has the right to interfere in this issue, the Judiciary chief highlighted.

He then touched upon Washington’s claims that an American national has gone missing in Iran.

“The [White House] statement says that Iran must return this US national. This is a pointless and illogical demand because Iran has, time and again, announced through official channels, namely the Foreign Ministry, that the individual has left Iran, and Tehran has no information about his fate. The United States’ repeating its claims is really irrational. Of course, evidence shows the person in question has been seen in some countries, but this has nothing to do with Iran,” Ayatollah Amoli Larijani said.

He then underscored that Iranians who are in US jails must be freed.

“We remind the US of its forty years of encroachment upon Iranian people’s rights, and we are telling them that the Iranian nationals who are incarcerated in America’s horrifying prisons against all international laws and rules must be released as soon as possible,” the Judiciary chief underlined.

He also pointed to the numerous crimes committed by the US during its aggression on other countries as well as its violation of prisoners’ rights.

“The US didn’t refer to Guantanamo as a prison in order to be able to torture inmates easily. They announced waterboarding is not torture, so that American Nazis could easily commit crimes.”