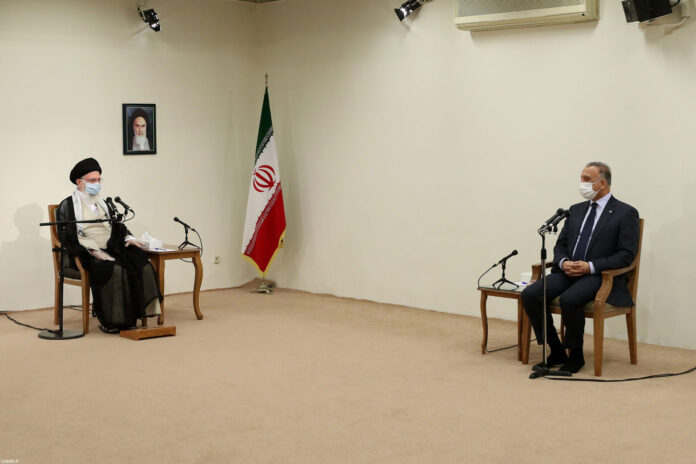 In a meeting with Iraqi Prime Minister Mustafa al-Kadhimi in Tehran on Tuesday, Ayatollah Khamenei underlined that the Islamic Republic of Iran will never forget the American assassination of General Soleimani in Iraq and “it will definitely deal the reciprocal blow to Americans.”

Referring to the assassination of General Soleimani and Iraqi commander Abu Mahdi al-Muhandis as an example of result of American presence in Iraq, the Leader told al-Kadhimi, “They (Americans) killed your guest at your home and brazenly admitted to such crime, while this is not an issue of little importance.”

“Iran certainly opposes anything that would weaken the Iraqi government,” Ayatollah Khamenei emphasized, adding, “However, the Americans’ view about Iraq is totally contrary to ours, because the US is an enemy in the true sense of the word, and does not favor an independent and strong Iraq with a government elected by majority vote.”

“For the Americans, it is not important who the prime minister of Iraq is. They are after a government similar to the government of Paul Bremer, the American governor of Iraq shortly after the fall of Saddam,” Ayatollah Khamenei warned.

“Iran would not interfere in Iraq’s relations with the US, but expects the Iraqi friends to realize the US and be mindful that the US presence in every country is the source of corruption, destruction and devastation,” the Leader underscored.

“The Islamic Republic of Iran expects that the decision made by the Iraqi government, nation and Parliament about the eviction of Americans would be pursued, because their (American) presence causes insecurity,” Ayatollah Khamenei stated.

The Leader then noted that the relations between Iran and Iraq are literally brotherly in light of the abundant historical, religious, cultural and traditional commonalities, adding, “What is greatly important to the Islamic Republic of Iran in the bilateral relations is the interests, expediencies, security, dignity, regional might, and improvement of situation in Iraq.”

Ayatollah Khamenei made it clear that Iran will never interfere in Iraq’s domestic affairs, stressing, “Iran favors a dignified and independent Iraq with its territorial integrity, unity and domestic solidarity being protected.”

The Leader also praised the consensus among the Iraqi political groups and currents about the election of Prime Minister al-Kadhimi’s government, saying, “The Americans and their proxies always seek power vacuum in the regional countries in order to foment chaos and pave the way for their interference, the same job they did in Yemen, as everybody is now witnessing the deplorable situation in Yemen.”

Highlighting Tehran’s support for al-Kadhimi’s government, the Leader said wisdom, religion and experience dictate that Iran and Iraq must broaden ties in all fields.

“However, the expansion of relations between Iran and Iraq has opponents, above all the US, but one should not be afraid of the US by any means, because it cannot do a damn thing,” the Leader emphasized.

While the US is attempting to create problems, the Iraqi government should vigorously make headway regardless of such disturbance and preserve the popular support, Ayatollah Khamenei added.

The Leader finally lauded Ayatollah Ali al-Sistani as a great asset to Iraq, saying another major asset is the Hashd al-Shaabi (Popular Mobilization Forces) which must be maintained.

For his part, the visiting Iraqi premier described the meeting with Ayatollah Khamenei as a great opportunity, and expressed gratitude to Iran for its supports for Iraq in the fight against ISIS and Takfiri terrorists.

“People of Iraq will never forget Iran’s supports, and the fact is that the bloods of Iraqis and Iranians have mixed together in the war against Takfiris.”

Al-Kadhimi also lauded the guidelines and advices given by Ayatollah Khamenei as a key to the problems.