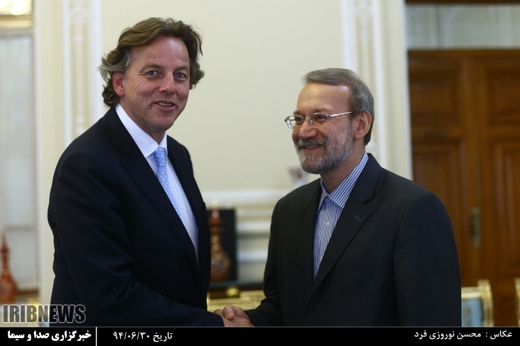 The good history of Tehran-Amsterdam cooperation has paved the way for expansion of ties between the two countries, Ali Larijani said.

“International determination of all countries is required to address regional and world challenges and crises,” Larijani said Sunday in a meeting with Dutch Foreign Minister Bert Koenders in Tehran.

Larijani said that the Islamic Republic of Iran has always stressed the need for holding talks and political solutions to regional crises.

The top MP recalled Iran-Holland friendly relations and said, “The good history of cooperation between the Islamic Republic of Iran and the Netherlands has paved the way for expansion of political, economic, cultural and parliamentary ties between the two countries.”

Larijani highlighted the importance of exchanging views and continued consultations between Iran and the European Union on different regional and international issues.

He stressed the importance of seizing the present opportunities to promote mutual cooperation between the two countries in the fields of energy, renewable energies and water resources.

The Dutch foreign minister, for his part, pointed to 400 years of relations between the Netherlands and Iran, and said that the nuclear agreement between Tehran and P5+1 has opened new horizons for the two sides in political, economic and cultural areas.