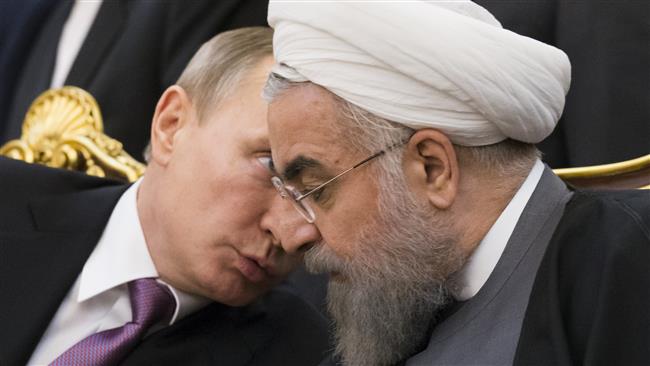 Russia’s ITAR-TASS news agency said Peskov had confirmed the delivery of the message in the form of a letter.

Lavrentiev  met with President Rouhani in Tehran on Saturday.

Russia, a Syria ally, has been providing military assistance to Damascus in its battle against foreign-backed terrorism. Iran, also an ally of Damascus, has been lending advisory support to the Syrian counterterrorism push.

Russia and Iran hold regular and close consultation concerning the situation in Syria toward coordinating their efforts in helping purge the Arab country of terrorism.

Explaining the subject of the meeting, the Russian Foreign Ministry said in a statement, “Tehran and Moscow’s positions to politically resolve the Syrian crisis are the same.”

The statement said that, during the meeting, the two sides highlighted that the armed conflict in Syria does not have a military solution. It was emphasized that the conflict can only be resolved through political channels and unconditional intra-Syria dialog based on United Nations Security Council resolutions, the Geneva Communiqué issued in June 30, 2012, and decision-making by pro-Syria international groups, the statement added.

The Geneva Communiqué, which was adopted in the first international meeting on the ongoing crisis in Syria in the Swiss city, sketches the steps in a process to end the violence in Syria.

The Russian statement concluded that the Tehran talks had placed emphasis on “the immutability of the two countries’ shared, principal position” on the reinforcement of the ceasefire regime in Syria and addressing the humanitarian situation while continuing the fight against the Takfiri terrorist groups of Daesh, al-Nusra Front, and other active terrorist groups in Syria.