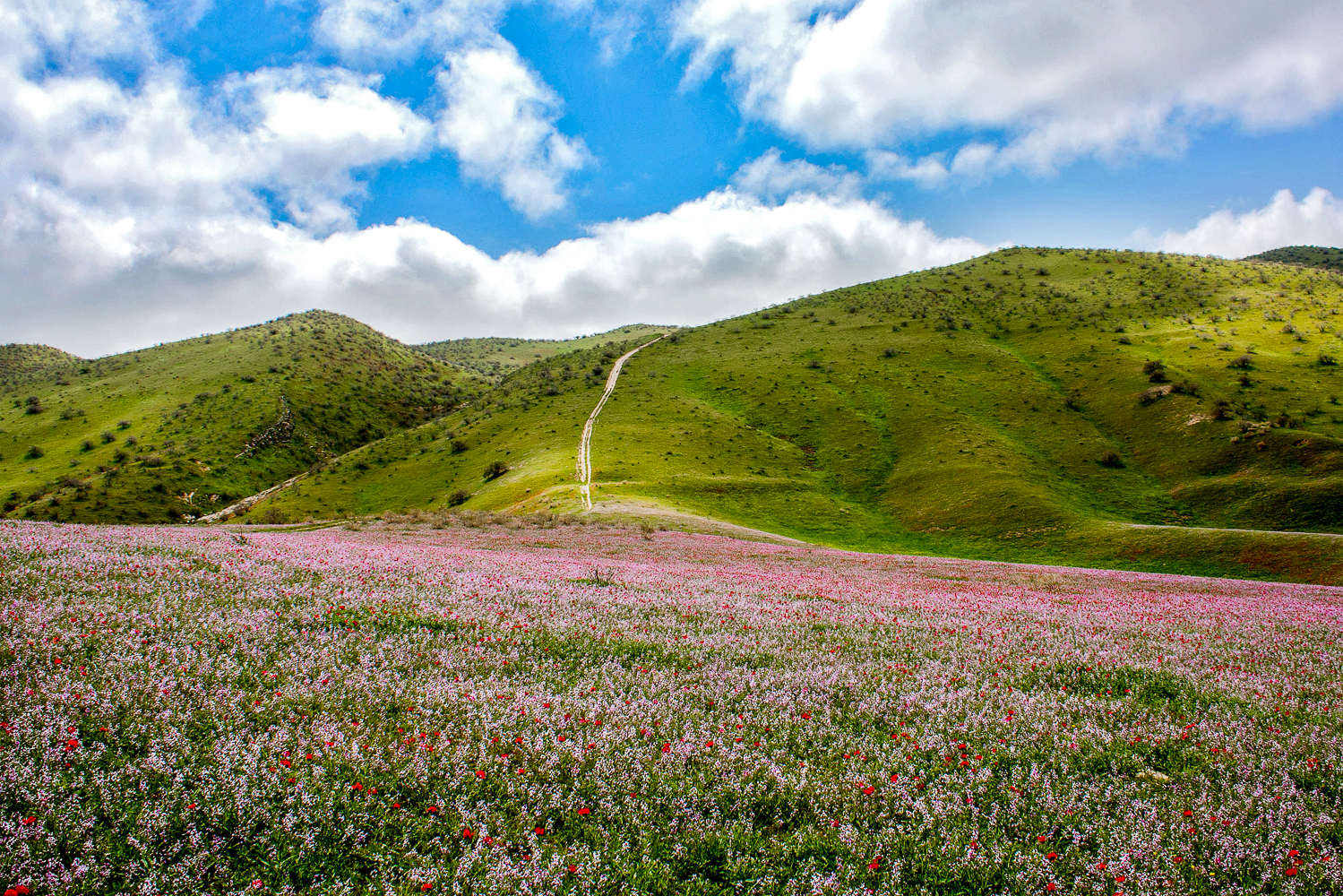 Khorasan Razavi province in northeastern Iran is widely known for the millions of Shiite pilgrims it annually attracts, but it is also home to various tourist attractions.

Mashhad, where the Holy Shrine of Imam Reza (AS) is located, is the capital of Khorasan Razavi and the second most populous city in Iran. This city was the capital of Iran during Afsharid dynasty. 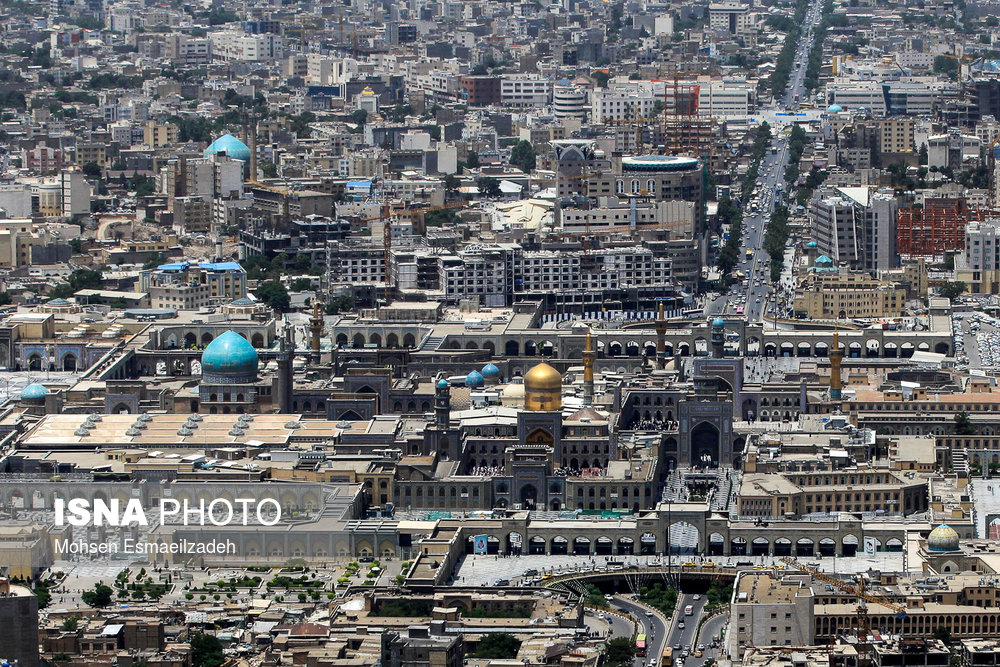 The Shrine of Imam Reza (AS) is the tomb of the eighth Imam of Shiites. In terms of area it is the largest mosque in the world, and in terms of population it is the second. 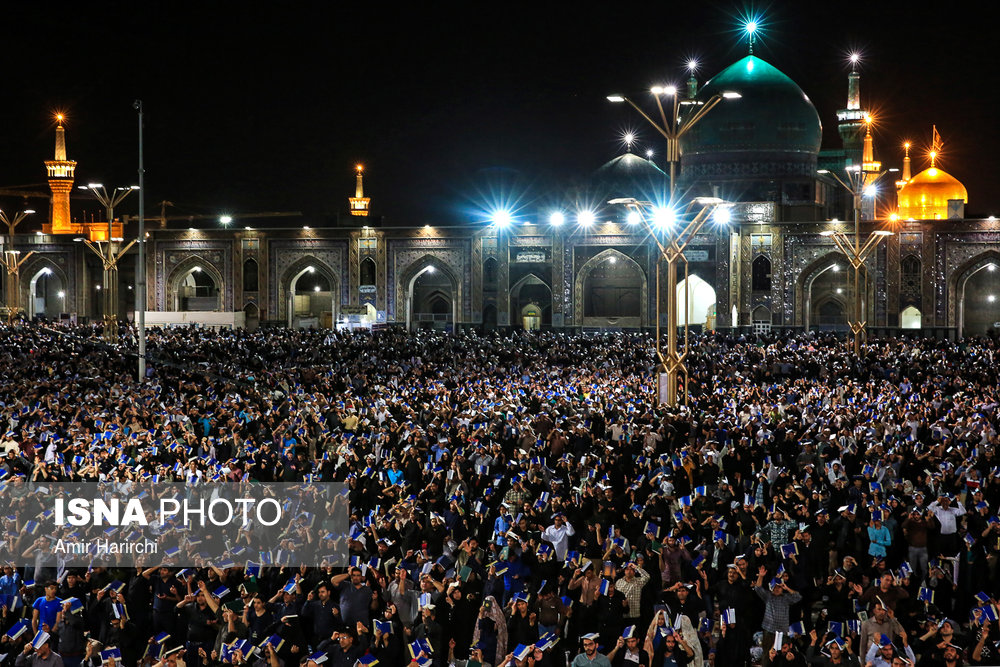 Among the places associated with the shrine of Imam Reza (AS) are Goharshad Mosque, the museum, two libraries, four religious science schools, the cemetery, Razavi Islamic Sciences University, are large porches for worshipers. ‘Mellat Park’ in Mashhad, is the oldest park in the city, built in 1964. This park is located west of Mashhad along the Vakilabad highway. ‘Kooh Sangi’ is a famous mountain and also the second largest recreational complex and park (after Mellat Park) in Mashhad. The tomb of Khawja Rabi is one of the other tourist attractions of Mashahd and it dates back to Safavid period. This structure was built by Shah Abbas in Safavid period on the recommendation of Sheikh Baha’i. The Abolqasem Ferdowsi’s Mausoleum is located in a beautiful garden 20 kilometres north of Mashhad. The building has an area of 900 square metres and is made of concrete, stone and tile. 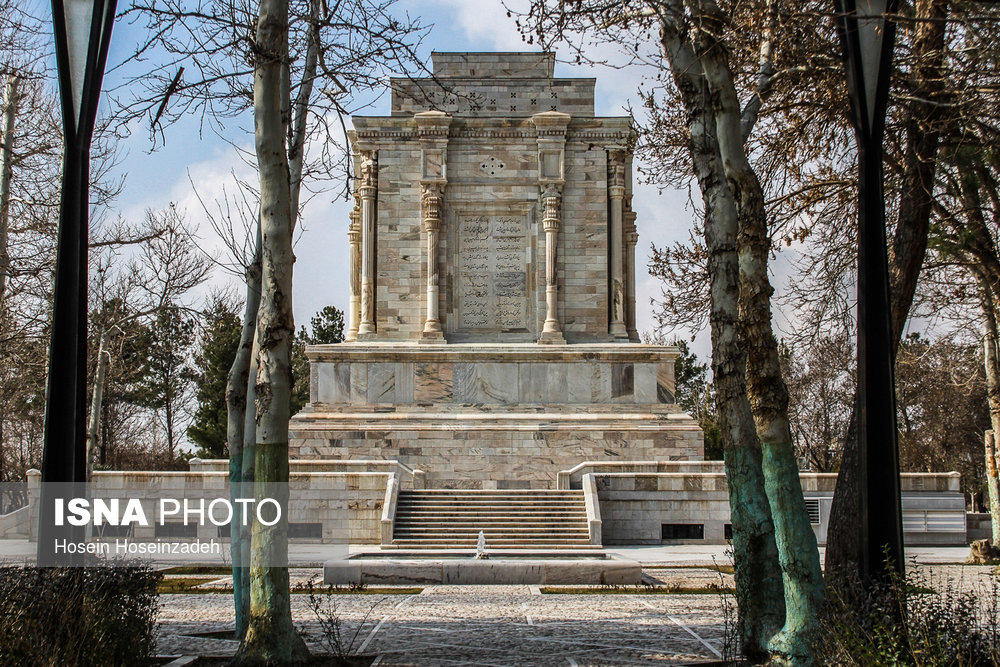 The building of Ferdowsi’s tomb was renovated by Hooshang Seyhoun based on the previous designs of Hossein Lorzadeh with some changes. The current building was opened in 1934. 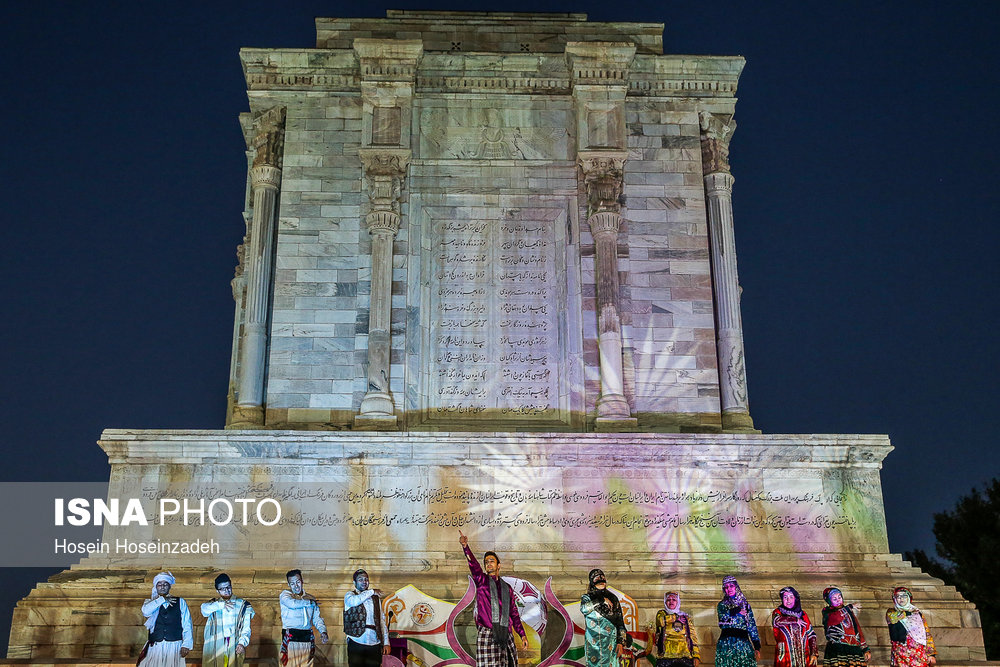 The Great Museum of Khorasan has a treasure or a repository of objects, specialized halls of historical and anthropological objects, a special corner of cosmology, a library, a laboratory and workshops to repair historical objects. 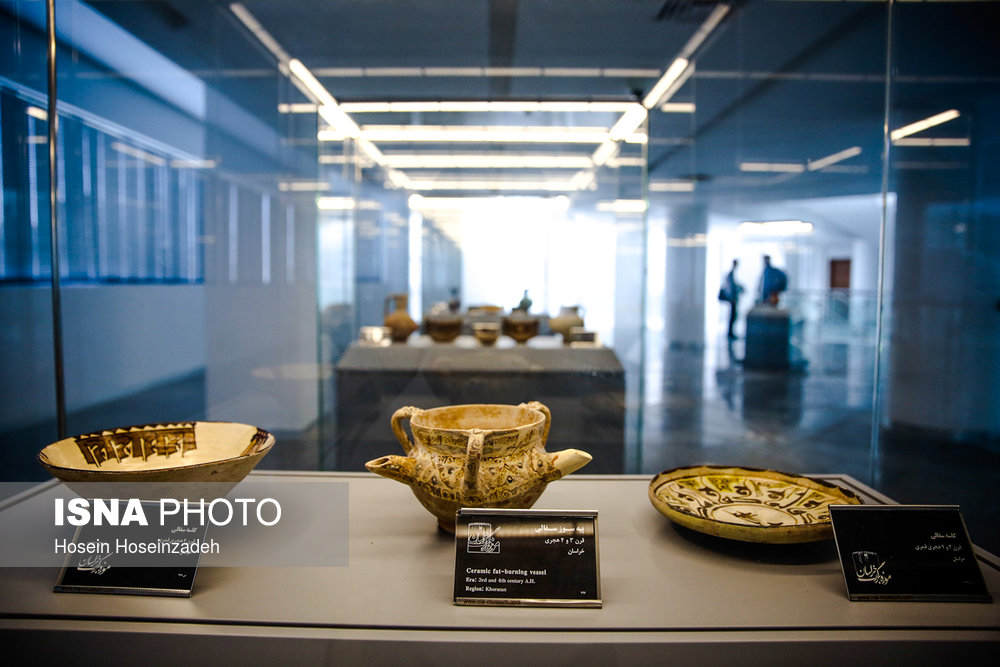 The Mausoleum of Attar Neyshaburi, the famous Iranian poet, is a monument built during the Timurid period. This building was renovated in the second Pahlavi period and was restored to some extent in the 90’s. 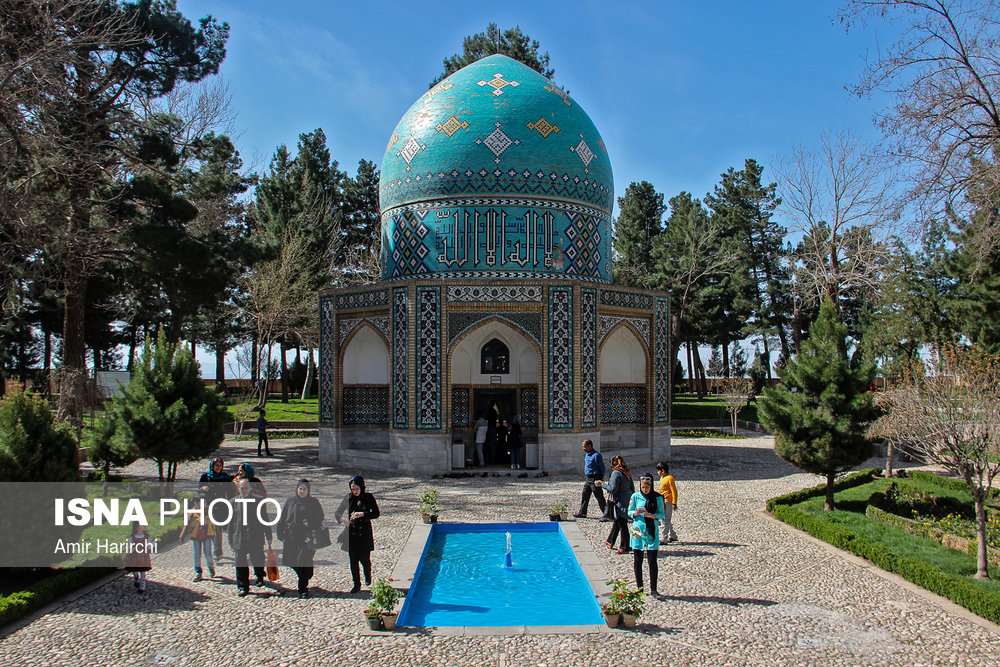 The Mausoleum of Omar Khayyam is a salient example of modern Iranian architecture. The design of this building is based on the thoughts of Omar Khayyam, which shows Khayyam as mathematician, astronomer, and poet. 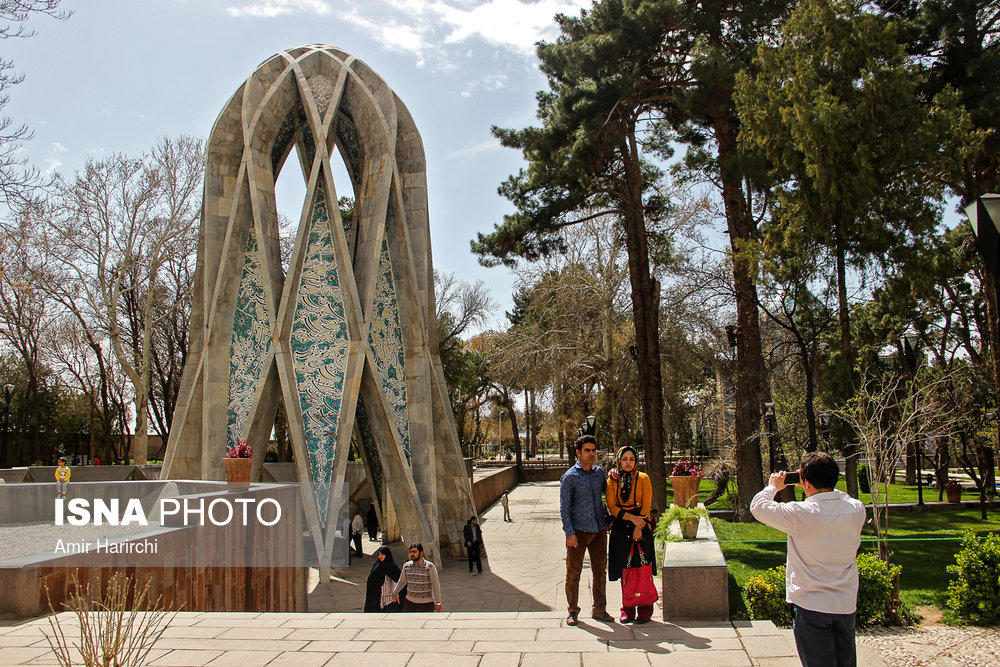 The Harouniyeh building is the oldest monument in the city of Tus. 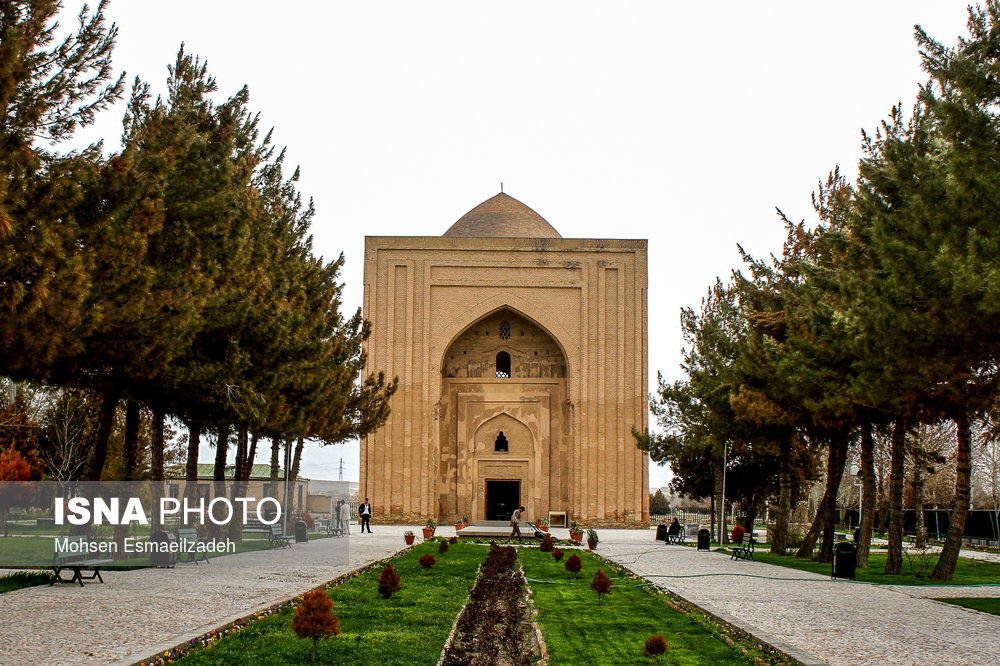 The Vakilabad Forest Park is a park with seasonal rivers and a nice weather. The trees of the park are irrigated by Vakilabad Qanat or underground channel. 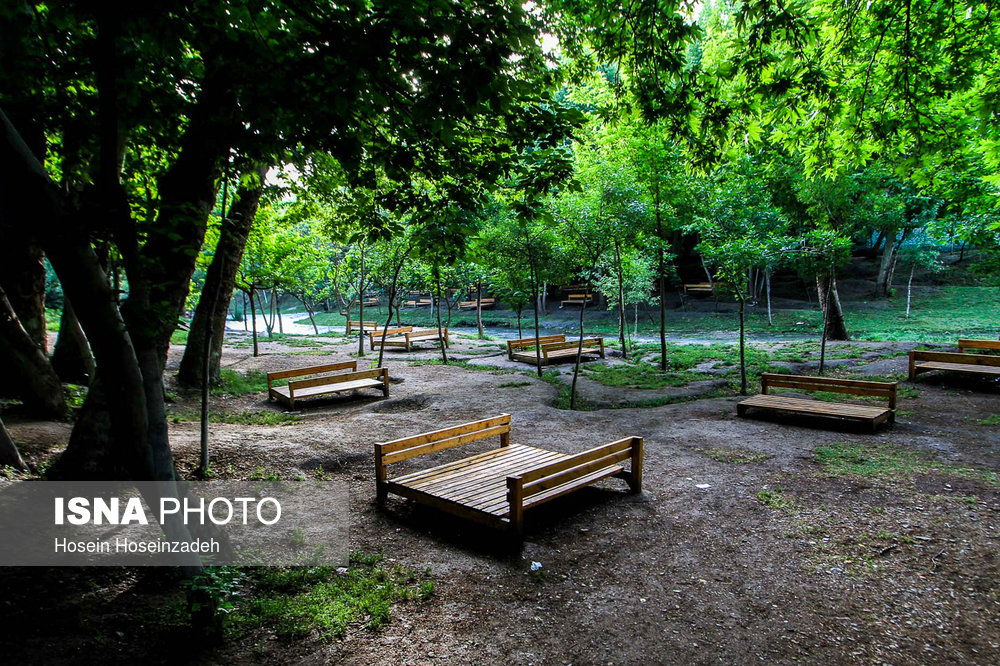 The Vakilabad Zoo, the only zoo in Mashhad, is located in the southwest of the city and next to the Vakilabad Forest Park. 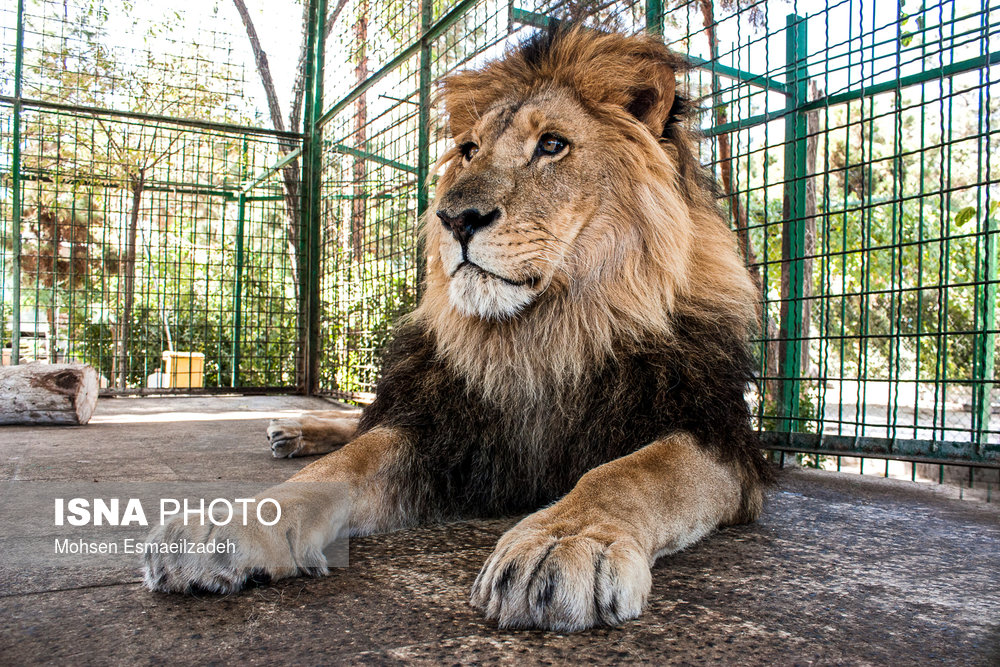 The Mazinan Caravanserai near Mashhad dates back to the Safavid period and is located in the city of Davarzan. 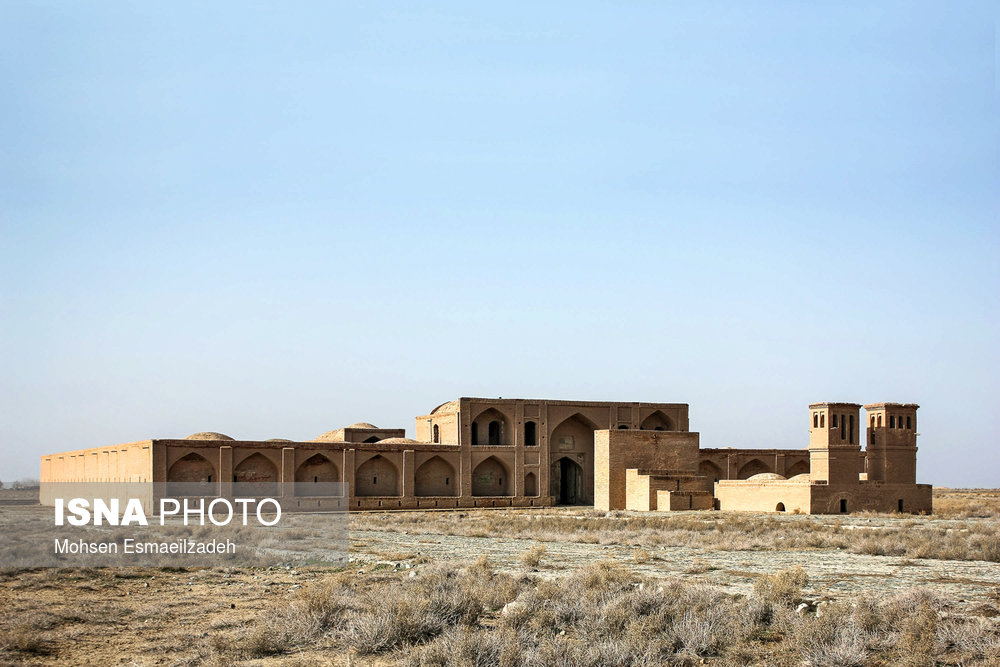 The Burial Chamber of Nader Shah is a building inside Garden Complex of Naderi Museum. It is built to commemorate Nader Shah Afshar. The building has two sections: Nader Shah’s burial site and two museum galleries. 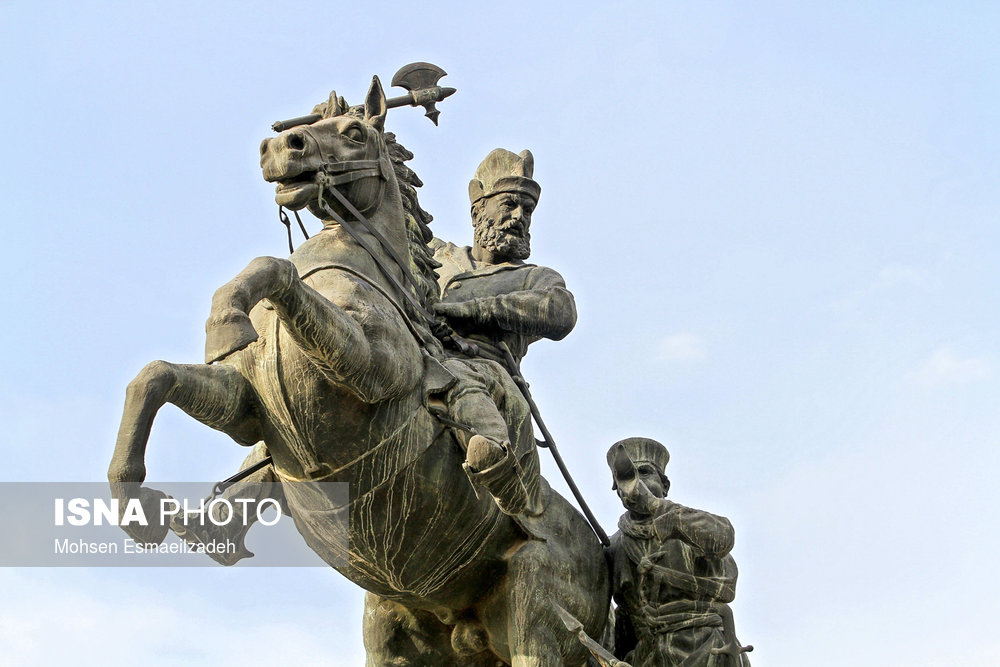 ‘Khorshid Buiding’ was built in Kalat city on the order of Nader Shah to serve as a resort and a treasury for jewelleries and the spoils of war. 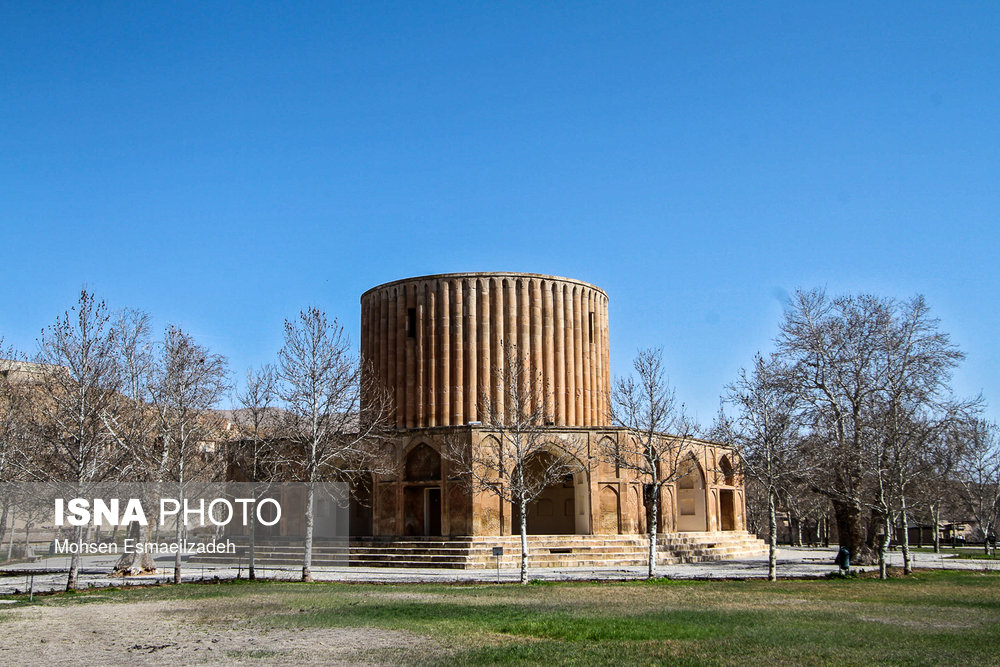 Akhlamad waterfall is one of the waterfalls of Khorasan Razavi province, 15 km from Chenaran facing Mount Binalud. Akhlamad consists of two waterfalls, each of them more than 85 meters high. 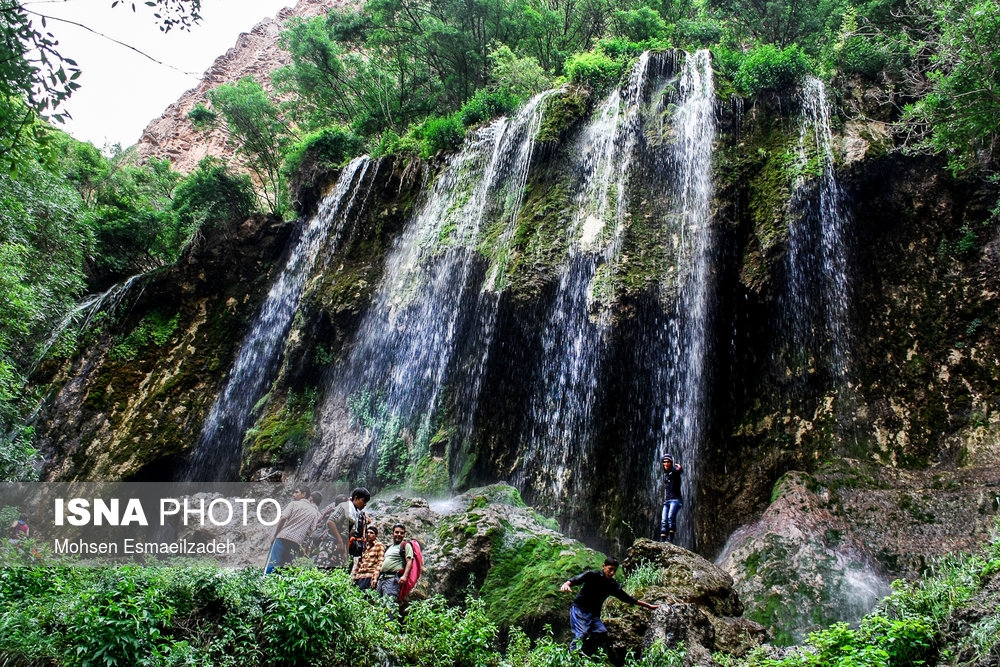 Mazdavand Cave is located near Sarakhs city. It is estimated that this cave dates backs to the second millennium BC. 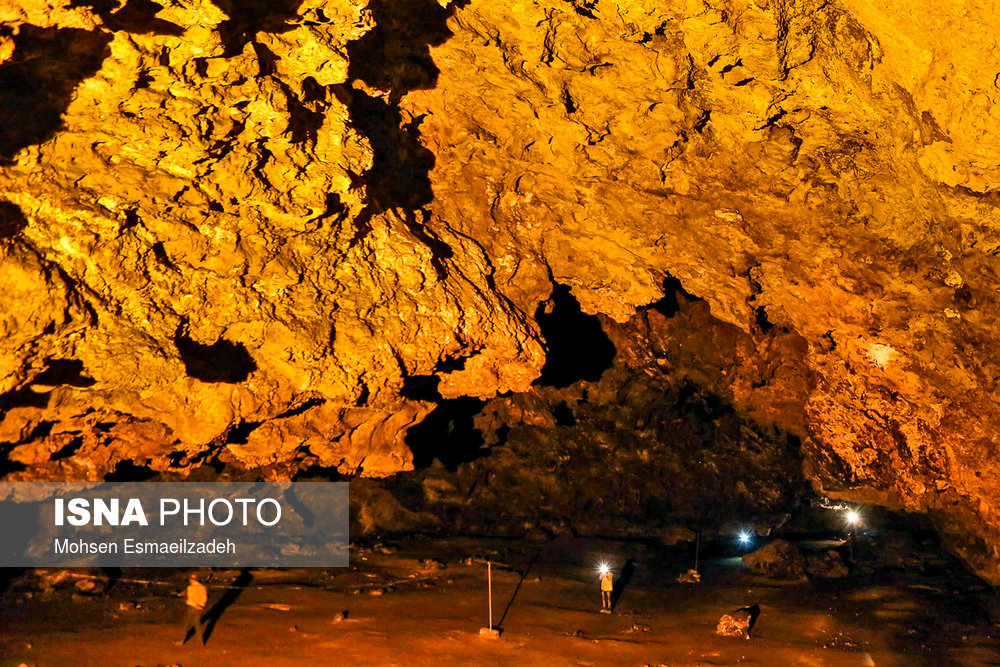 The Ghasabe Qanat is the largest Qanat of Gonabad and perhaps one of the wonders of the human civilization history. Ghasabe Qanat wells are in two forms: shallow and vertical wells and deep wells. 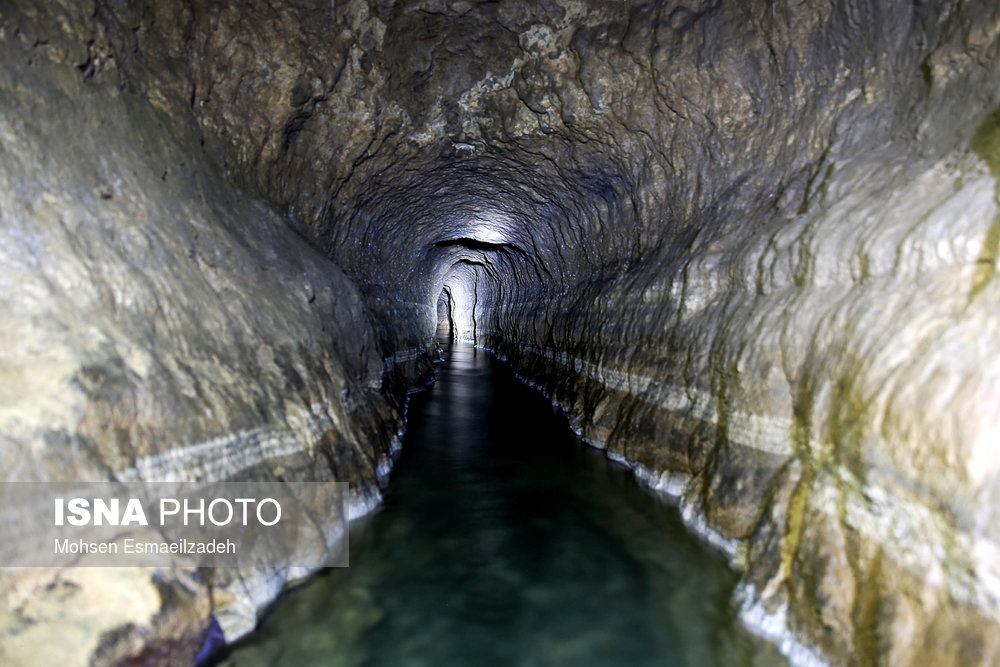 ‘Riab’, is a historic village about five kilometres from the city of Gonabad. The mosque, castle door, Ab anbars (water reservoirs), Abu Mansoor Riabi’s tomb, castle towers, old school and Riab’s Hammam are among the attractions of this village. 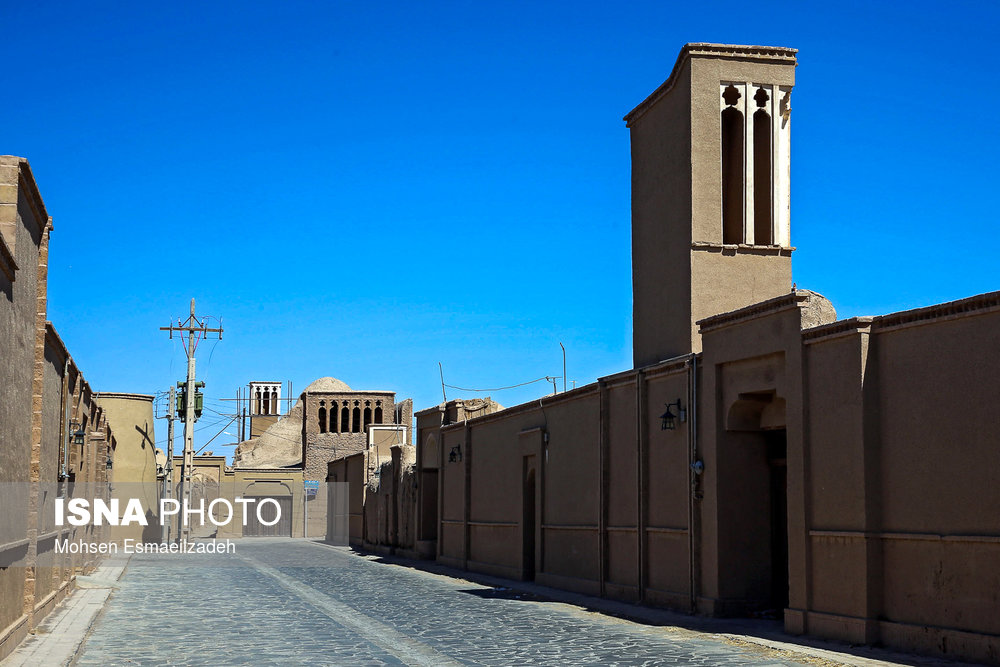